Trueperella pyogenes is an opportunistic pathogen, responsible for important infections in pigs and significant economic losses in swine production. To date, there are no available commercial vaccines to control diseases caused by this bacterium. In this work, we performed a comparative proteomic analysis of 15 T. pyogenes clinical isolates, by “shaving” live cells, followed by LC-MS/MS, aiming at the identification of the whole set of surface proteins (i.e., the “pan-surfome”) as a source of antigens to be tested in further studies as putative vaccine candidates, or used in diagnostic tools. A total of 140 surface proteins were detected, comprising 25 cell wall proteins, 10 secreted proteins, 23 lipoproteins and 82 membrane proteins. After describing the “pan-surfome”, the identified proteins were ranked in three different groups based on the following criteria: to be (i) surface-exposed, (ii) highly conserved and (iii) widely distributed among different isolates. Two cell wall proteins, three lipoproteins, four secreted and seven membrane proteins were identified in more than 70% of the studied strains, were highly expressed and highly conserved. These proteins are potential candidates, alone or in combination, to obtain effective vaccines against T. pyogenes or to be used in the diagnosis of this pathogen. View Full-Text
Keywords: T. pyogenes; proteomics; pan-surfome; surface proteins; antigens; vaccine T. pyogenes; proteomics; pan-surfome; surface proteins; antigens; vaccine
►▼ Show Figures 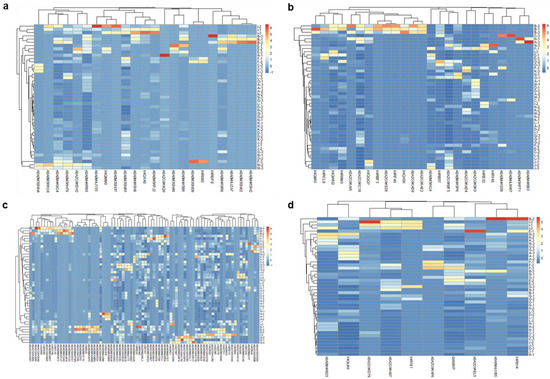