Naturally occurring human antibodies (Abs) of the isotypes IgM and IgG and reactive to the galactose-α-1,3-galactose (α-Gal) epitope are associated with protection against infectious diseases, caused by pathogens expressing the glycan. Gut microbiota bacteria expressing α-Gal regulate the immune response to this glycan in animals lacking endogenous α-Gal. Here, we asked whether the production of anti-α-Gal Abs in response to microbiota stimulation in birds, confers protection against infection by Aspergillus fumigatus, a major fungal pathogen that expresses α-Gal in its surface. We demonstrated that the oral administration of Escherichia coli O86:B7 strain, a bacterium with high α-Gal content, reduces the occurrence of granulomas in lungs and protects turkeys from developing acute aspergillosis. Surprisingly, the protective effect of E. coli O86:B7 was not associated with an increase in circulating anti-α-Gal IgY levels, but with a striking reduction of anti-α-Gal IgA in the lungs of infected turkeys. Subcutaneous immunization against α-Gal did not induce a significant reduction of lung anti-α-Gal IgA and failed to protect against an infectious challenge with A. fumigatus. Oral administration of E. coli O86:B7 was not associated with the upregulation of lung cytokines upon A. fumigatus infection. We concluded that the oral administration of bacteria expressing high levels of α-Gal decreases the levels of lung anti-α-Gal IgA, which are mediators of inflammation and lung damage during acute aspergillosis. View Full-Text
Keywords: alpha-Gal; microbiota; aspergillosis; Aspergillus fumigatus; granulomas; cross-protective immunity alpha-Gal; microbiota; aspergillosis; Aspergillus fumigatus; granulomas; cross-protective immunity
►▼ Show Figures 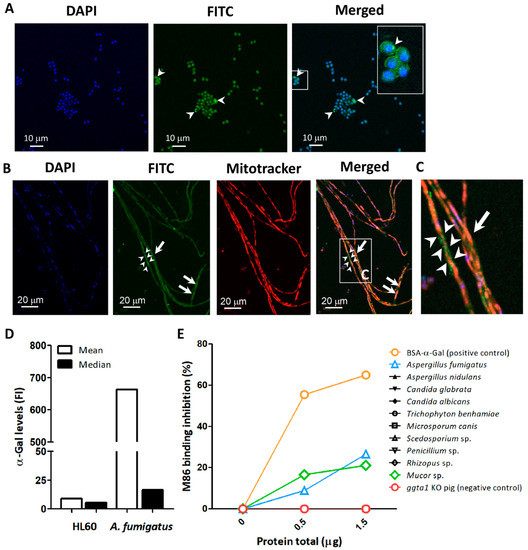