Harnessing the Power of T Cells: The Promising Hope for a Universal Influenza Vaccine

Influenza viruses infect approximately 20% of the global population annually, resulting in hundreds of thousands of deaths. While there are Food and Drug Administration (FDA) approved antiviral drugs for combating the disease, vaccination remains the best strategy for preventing infection. Due to the rapid mutation rate of influenza viruses, vaccine formulations need to be updated every year to provide adequate protection. In recent years, a great amount of effort has been focused on the development of a universal vaccine capable of eliciting broadly protective immunity. While universal influenza vaccines clearly have the best potential to provide long-lasting protection against influenza viruses, the timeline for their development, as well as the true universality of protection they afford, remains uncertain. In an attempt to reduce influenza disease burden while universal vaccines are developed and tested, many groups are working on a variety of strategies to improve the efficacy of the standard seasonal vaccine. This review will highlight the different techniques and technologies that have been, or are being, developed to improve the seasonal vaccination efforts against influenza viruses.
Keywords: influenza; seasonal vaccine; egg-adaptation; vaccine efficacy influenza; seasonal vaccine; egg-adaptation; vaccine efficacy

Despite the fluctuating efficacy of the seasonal influenza vaccine from year to year, it remains the best strategy for combating infection. Experimental universal influenza vaccines are intended to broadly protect against many (if not all) influenza virus strains regardless of antigenic mutation in the HA head domain (reviewed in [86,87,88]). As with the development of any new vaccine, the timeline for their widespread use in humans, as well as their true efficacy against divergent viral strains is uncertain. Thus, as a short-term measure, efforts to improve the efficacy of the seasonal vaccine as well as the development of other anti-viral therapeutics are still needed. The development and application of new approaches to improve on the current technologies, along with the development of completely new vaccines, makes this an exciting time to be part of the influenza virus research community. Current efforts and further optimization of many complementary strategies for influenza vaccine development are critical to our ability to reduce and even prevent the epidemic and pandemic outbreaks of the future.

Authors A.T.H. and N.S.H. equally contributed to the writing of this manuscript.

Duke University has filed for protection of the intellectual property utilizing dual-HA influenza viruses as vaccines described in this review. 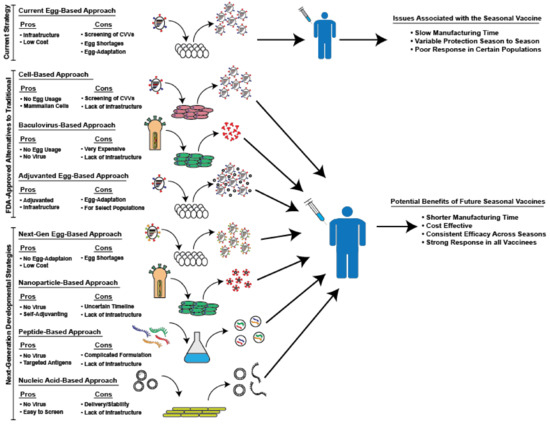