A Belgian Serosurveillance/Seroprevalence Study of Diphtheria, Tetanus and Pertussis Using a Luminex xMAP Technology-Based Pentaplex
Next Article in Special Issue

We have conjugated the S9 peptide, a mimic of the group B streptococcal type III capsular polysaccharide, to different carriers in an effort to elicit an optimal immune response. As carriers, we utilized the soluble protein keyhole limpet hemocyanin and virus-like particles (VLPs) from two plant viruses, Cowpea Chlorotic Mottle Virus and Cowpea Mosaic Virus. We have found that coupling the peptide to the soluble protein elicits a Th2 immune response, as evidenced by the production of the peptide-specific IgG1 antibody and IL-4/IL-10 production in response to antigen stimulation, whereas the peptide conjugated to VLPs elicited a Th1 response (IgG2a, IFN-γ). Because the VLPs used as carriers package RNA during the assembly process, we hypothesize that this effect may result from the presence of nucleic acid in the immunogen, which affects the Th1/Th2 polarity of the response.
Keywords: group B streptococcus; Streptococcus agalactiae; capsular polysaccharide; antigen; mimotope; synthetic peptide group B streptococcus; Streptococcus agalactiae; capsular polysaccharide; antigen; mimotope; synthetic peptide

To elicit optimal antibody responses to small peptide immunogens, they are often attached to larger carriers, either by chemical conjugation or genetic fusion. We have previously identified a peptide, designated S9, that mimics the structure of a protective epitope of the group B-streptococcus (GBS) capsular polysaccharide type III [1,2]. In an effort to present this peptide in a conformation that might mirror that of the natural, repetitive epitope, we sought to express it on the surface of a virus consisting of repeating capsid protein subunits. For this purpose, we chose to use Cowpea Chlorotic Mottle Virus (CCMV), a member of the Bromoviridae virus family, whose three-dimensional (3D) structure has been solved [3]. The capsid is composed of 180 chemically identical protein subunits. Each protein subunit is comprised of an eight-stranded, antiparallel, β-barrel core (from amino acids 52–176), and results in the outward projection of five loops. The DNA encoding each loop has been engineered to have BamH I restriction enzyme sites to allow for the insertion of DNA encoding epitopes. Salt and pH stable mutants of CCMV have been identified [4]. Both wild-type and mutant viruses can be expressed in heterologous expression systems [5]. A structurally similar virus, Cowpea Mosaic Virus (CPMV), has been proposed as a vaccine scaffold [6,7]. CPMV has a stable structure and possesses a single uniquely reactive lysine residue per asymmetric unit (60 per virus particle) which may be used for chemical conjugations [7,8,9]. In this study we have conjugated the S9 peptide to CCMV and CPMV virus-like particles (VLPs), to CCMV capsid monomers, and to the soluble carrier protein keyhole limpet hemocyanin (KLH). We then studied the immune response these antigenic preparations elicit in mice. We have found that in the absence of adjuvant, the carrier has an important effect upon the polarity of the anti-peptide response, with the VLPs eliciting a Th1 response, and KLH a Th2 response.

2.2. Conjugation of Peptides to Carriers

S9 peptide (FDTGAFDPDWPA) with a C-terminal cysteine was conjugated to VLPs via the heterobifunctional cross-linking reagent sulfo-SMCC (Pierce Chemical, Rockford, IL, USA). To preclude aggregation between virus particles through disulfide linkages and prevent VLP cysteines from binding the maleimide on the cross-linking agent, VLPs were treated with tris (2-carboxyethyl) phosphine (TCEP) and 2-iodoacetamide. The peptides were TCEP-treated, and linked at a 50:1 coupling ratio. Coupling was confirmed by SDS-PAGE and ELISA. Integrity of conjugated VLPs was demonstrated on sucrose density gradients and by electron microscopy. The peptide was conjugated to maleimide-derivatized KLH (Pierce) at a mass ratio of 1:1. Conjugate was separated from peptide by centrifugal filtration on a 100 KD cutoff Microcon membrane (Millipore, Billerica, MA, USA). Antigen concentrations were determined by BCA Protein Assay (Pierce). Peptide antigen was quantified by ELISA with conjugate-coated microtiter wells and detected with the S9 mAb.

Two separate immunizations were performed. In the first, female BALB/c mice 8–10 weeks old were immunized with antigens, either emulsified in a 1:1 ratio with complete Freund’s adjuvant (CFA, Difco, Detroit, MI, USA) for the primary immunization, and with incomplete Freund’s adjuvant (IFA) for booster injections (adjuvant group), or diluted with PBS for primary and booster immunizations (no adjuvant group). Each group was separated into five subgroups (four mice in each subgroup), each receiving a different antigen: CCMV, CCMV-S9, SubE-S9, CPMV-S9 and KLH-S9. Mice were immunized with following amount of antigens: CCMV-S9 20 µg, SubE-S9 20 µg, CPMV-S9 10 µg, KLH-S9 10 µg. The concentration of antigen was based upon ELISA results characterizing the amount of S9 peptide present. Mice were bled to collect sera before immunization (bleed 1). Primary immunization was given subcutaneously (sc) and boosters intraperitonealy (ip). Booster immunization followed the primary immunization by four weeks and one week after boosting, all mice were bled to collect sera (bleed 2) to measure antibody. A subset of mice were further boosted with 2.7 × 106 heat-killed GBS. In the second experiment, 24 mice were separated into four groups receiving CCMV, CCMV-S9, CPMV-S9 and KLH-S9, all without adjuvant, using the same doses and timing. All animal protocols were approved by the IACUC at the Research Institute for Children. The mouse colony was AAALAC-approved.

Antibody to peptide, CCMV, or GBS was measured by ELISA. Microtiter wells were coated with peptide or CCMV at 5 µg/mL, or with GBS immobilized as previously described [11]. Wells were blocked with PBS/1% bovine serum albumin. Sera were diluted to appropriate concentrations in PBS to measure different antibody responses: 1:200 to test the antibody response to GBS, 1:5000 to test the antibody response to S9 peptide, and 1:1000 for anti-CCMV. Sera were incubated 16 hours at 4 °C in antigen-coated microtiter wells. Wells were washed, and incubated with alkaline phosphatase-conjugated anti-mouse Ig class or subclass-specific antibodies (Zymed, South San Francisco, CA, USA). After 4–6 hours incubation the wells were washed and the colorimetric substrate p-nitrophenol in diethenaolamine buffer pH 9.8. Microtiter wells were read at A405 in an automated microplate reader (Biotek, Winooski, VT, USA).

Mice from the second experiment with high anti-S9 and anti-GBS antibody titers were bled and immunized ip with the same antigen and dose as in the prime and boost. Immunized and age-matched naive mice were bled and sacrificed four days after the second booster immunization. Spleens and mesenteric lymph nodes were removed aseptically. The spleens and mesenteric nodes were pooled, single-cell suspensions prepared, and purified with Lymphocyte M separation medium (Cedarlane Laboratories Limited, Ontario, Canada). Cells were plated 100 µL per well (2 × 105 cell per well) into sterile 96-well microplates (Costar, Corning Inc., Corning, NY, USA) and stimulated either with medium, CCMV, CCMV-S9, S9, KLH-S9, KLH, all at 20 µg/mL, or PHA-M (Sigma Chemical, St. Louis, MO, USA) at 10 µg/mL. Cultures were incubated for seven days at 37 °C in 5% CO2. The supernatants were collected at day 3, 5 and 7 and frozen. A sandwich ELISA was used to determine the amount of gamma interferon (IFN-γ), interleukin 4 (IL-4) and interleukin 10 (IL-10) produced by the cells during antigen activation. Antibody pairs, recombinant standards and ELISA reagent for the assay were purchased from eBioscience, Inc. Plates were coated with capture antibody. After blocking, the culture media, and manufacturer’s standards, were added in duplicate to the plates in a two-fold dilutions. We then added 100 µL/well of the diluted biotin-conjugated detection antibody, followed by avidin-peroxidase, and then 2,2-azinobis-3-ethylbenzthiazoline-sulfonic acid with 0.3% H2O2. The reaction was stopped with 0.7 M SDS in DMF and purified water, 1:1). The absorbance was measured at 450 nm. In each sample, the final concentration of IFN-γ, IL-4 or IL-10 was determined from the standard curves by calculating the mean concentration from two dilutions.

The results presented in this manuscript demonstrate the following: (1) Attempts to create chimeric CCMV by inserting foreign peptide sequences into any of the surface-exposed loops of the capsid protein result in failure of virus/VLP assembly; (2) Immunization with peptide conjugated to yeast-expressed VLPs results in a Th1 response directed against the peptide, whereas if the peptide is conjugated to the protein carrier, a Th2 response develops. This polarity appears to result from the carrier-driven secretion of IL-4, and is not observed when adjuvant is used; (3) The S9 peptide is an antigenic mimic, in that immunization of mice with GBS results in the production of S9 peptide–cross-reactive antibody [1]. However, it is less effective as a mimetic immunogen, inducing marginal anti-GBS responses and no immunological memory for GBS.

This work was supported by Children’s Hospital of New Orleans, and by NIH grants R01AI42184, R43AI51086, and U54GM104940 (Louisiana Clinical and Translational Science Center). RP and UI were recipients of scholarships from the Royal Thai Government. We would like to thank Debbie Willits, Sue Brumfield, and Royce Wilkinson for advice, encouragement, and experimental assistance. Emily Moran and Megan Weydert provided expert technical assistance. John E. Johnson’s laboratory provided the S9-conjugated CPMV. 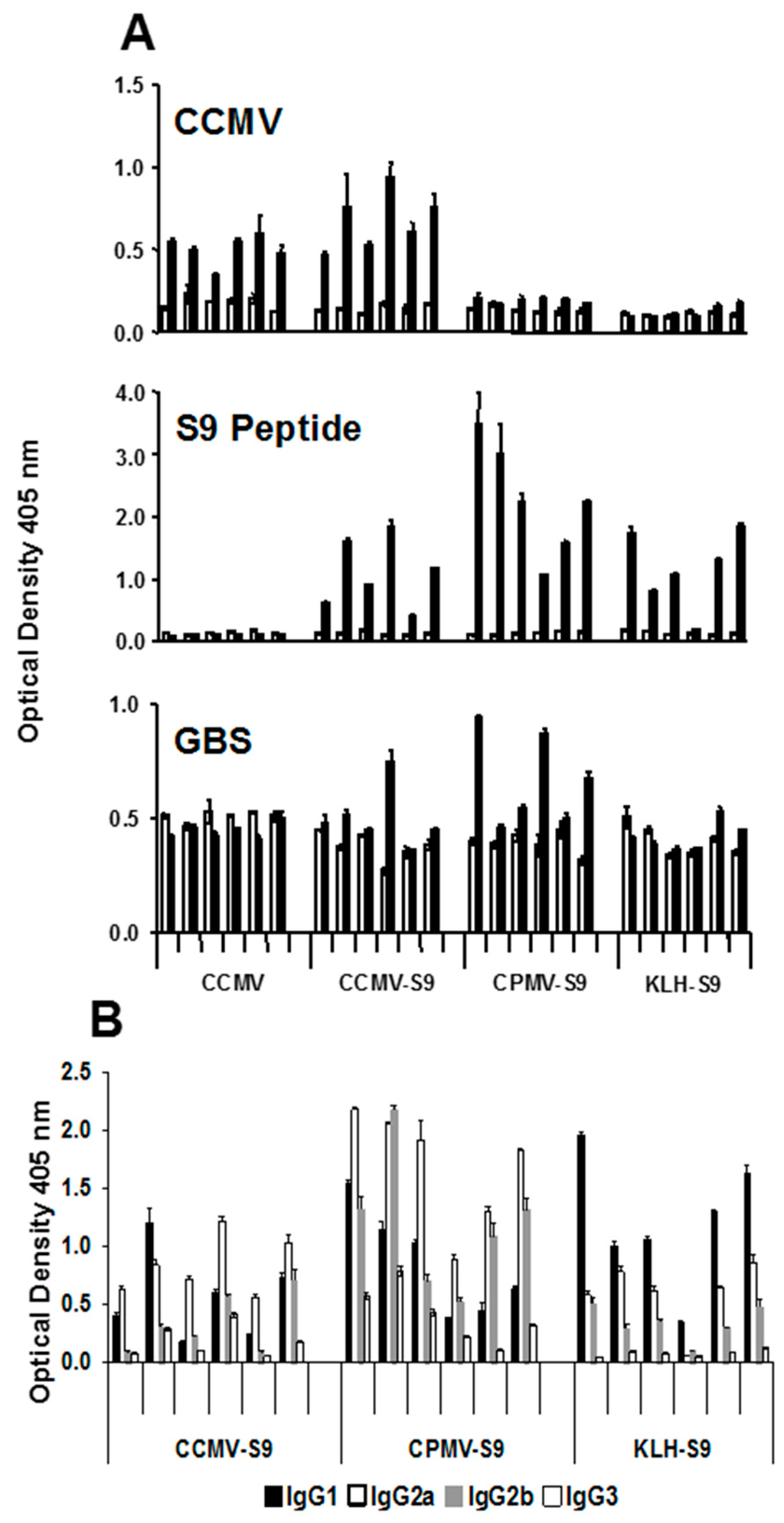