COVID-19 in China and the US: Differences in Hospital Admission Co-Variates and Outcomes
Previous Article in Journal

Aseptic Meningitis, Mucocutaneous Lesions and Arthritis after COVID-19 Vaccination in a 15-Year-Old Boy

:
We report a 15-year-old boy who developed aseptic meningitis 10 days after administration of the second dose of the COVID-19 vaccine BNT162b2. Although accompanying aphthous mouth ulcers resembling herpetic stomatitis initially led us to suspect an underlying viral infection, broad virological and microbiological screening did not identify any causative pathogen. Gonarthritis and skin lesions, which both developed within three days after admission, extended the clinical presentation eventually resembling an acute Behçet’s disease episode. This is the first description of a juvenile patient with aseptic and pathogen-negative meningitis occurring in close temporal association with vaccination against COVID-19, along with a few previously reported adult patients with isolated meningitis and a further case with meningitis and an accompanying Behçet’s disease-like multisystem inflammation episode as seen in our patient. With billions of individuals being vaccinated worldwide so far and only a few cases of aseptic pathogen-negative meningitis reported in close temporal relation, causality is unclear. However, aseptic meningitis should be kept in mind in the differential diagnosis of patients with persistent or delayed onset of headache and fever following COVID-19 vaccination.
Keywords:
aphthous ulcers; aseptic meningitis; Behçet’s disease; mucocutaneous lesions; COVID-19; vaccination; mucocutaneous lesions

Vaccination against COVID-19 is essential to control the pandemic. The vaccines developed so far have good safety profiles, but full knowledge of adverse effects will only be acquired with time and through reports of unexpected medical events occurring in temporal association with their administration. Along with an increasing number of individuals being immunized worldwide, descriptions of rare but serious neuroinflammatory conditions such as Guillain–Barré syndrome (GBS) and transverse myelitis observed in close temporal relation with COVID-19 vaccinations led to considerations on specific neurological adverse reactions, although causality is still a matter of debate [1,2]. Recently, a few adult patients with aseptic meningitis possibly triggered by a COVID-19 vaccination have been described [3,4,5,6,7], one of which presented additional mucocutaneous and ocular symptoms leading the authors to consider the differential diagnosis of a first episode of Behçet’s disease [7]. Here, we report the first juvenile patient who developed aseptic meningitis with accompanying mucocutaneous lesions and arthritis resembling a Behçet’s disease episode in close temporal association with the COVID-19 vaccine BNT162b2 (Comirnaty, Pfizer/BioNTech, New York, NY, USA/Mainz, Germany).

Thirteen days after receiving his second dose of the BNT162b2 vaccine in late October 2021, a 15-year-old boy of German descent presented at our hospital with acute headache for three days and fever, nausea, vomiting as well as oral aphthous ulcers (Figure 1a) for one day. Ibuprofen did not improve the symptoms. His further medical history was unremarkable except for a knee cartilage surgery approximately one month ago due to a sports accident and a few tick bites. Vaccinations were complete according to the recommendations of the German Standing Committee on Vaccination (STIKO), including chickenpox immunization.
Upon admission, neck rigidity, positive Kernig and Brudzinski signs together with nausea and fever of 38.8 °C led to suspicion of meningitis. Aphthous ulcers were detected on lips, tongue and inner cheeks (Figure 1a), but not in the palate area. Further physical examination including skin status and neurological functions was unremarkable at this time. Blood count showed a mild leukocytosis of 10,920/µL (ref. 4200–10,800/µL) with predominant neutrophils of 8980/µL, elevated C-reactive protein (5.34 mg/dL, ref. <0.3 mg/dL), and normal procalcitonin level (<0.5 µg/L). Cerebrospinal fluid (CSF) analysis revealed a pleocytosis of 242/µL white blood cells, consisting of both granulocytes (109/µL) and lymphomononuclear cells (133/µL). Whereas liquor lactate (2.92 mmol/L) and glucose (65 mg/dL) were largely within normal ranges, concentrations of protein (69.4 mg/dL, ref. 15–40 mg/dL) and CSF/serum indices for IgA and IgM were significantly increased.
Broad microbiological and virological screening did not identify any causative pathogen. Screening included negative bacterial cultures and 16S ribosomal DNA-PCR as well as virological PCR analyses for HSV-1/2, HHV-6/7, parvovirus B19, EBV, VZV, CMV, entero-, parecho-, adeno-, noro-, measles, mumps, FSME-, and west-nil-virus in appropriate specimens (CSF, blood, stool and/or aphthous ulcers). Similarly, serological analyses did not reveal evidence for acute infections with VZV, HSV, CMV, EBV and B. burgdorferi (the latter including negative chemokine CXCL13 in CSF and persistently negative IgM and IgG in a control serum after 3 weeks). PCR and serological tests for an acute and/or prior COVID-19-infection were also unremarkable. Finally, a next-generation sequencing-based pathogen detection kit (DISQVER®, Noscendo, Duisburg, Germany) that amplifies free DNA from microbiological organisms and DNA-viruses did not identify a causative infectious agent in a blood sample taken due to persistence of nocturnal fever peaks three days after initiation of antibiotic treatment with cefotaxime.
During the three days following admission, the patient developed a slight maculopapular exanthema on his cheeks (not shown), a few erythema nodosum-like lesions (Figure 1b) and a single pustular lesion (Figure 1c) on his lower legs as well as swelling of his right knee, which had been operated one month before. Ultrasound revealed echo-free joint effusion (aspiration was refused by the patient and his parents).
He also complained of vitreous floaters. Thorough ophthalmological examination did not reveal signs of uveitis or other intraocular abnormalities, except for minimal inhomogeneities in the posterior vitreous detected by optic coherence tomography (OCT). Cranial MRI showed slight pachy- and leptomeningeal enhancement but otherwise normal intracranial morphology (Figure 2). Autoimmune serological analyses for rheumatoid factor, ANA, pANCA, cANCA, and anti-dsDNA, as well as genotyping for HLA-B51, were negative.
From the third to the fifth day after admission, fever and headache, as well as the abovementioned mucocutaneous, visual and joint complaints markedly decreased. Antibiotic treatment with cefotaxime was terminated after a total of eight days, whereas acyclovir was given only two days until negative PCR analyses for HSV and VZV were obtained. The boy fully recovered within three weeks after admission and remained asymptomatic for the following two months.

Here, we report a juvenile patient who developed aseptic meningitis with accompanying mucocutaneous lesions and arthritis resembling a Behçet’s disease episode in temporal association with the BNT162b2 vaccine. Although causality is unclear, aseptic meningitis should be kept in mind in the differential diagnosis of patients with persistent or delayed onset of headache and fever following COVID-19 vaccinations. The multisystem inflammation resembling Behçet’s disease, as presented by two out of six reported patients so far, warrants a more focused survey of this condition in regions with high prevalence of Behçet’s disease.

T.B., N.S., S.T.Y., W.F., R.G. and F.S. participated in the diagnostic workup and interpretation of clinical and laboratory data. T.B. and F.S. wrote the manuscript. All authors have read and agreed to the published version of the manuscript.

Ethical review and approval were waived for this report, because it is a retrospective case description which did not affect the clinical management of the patient.

Written informed consent to publish this case description was obtained from the patient and his parents.

Datasets including biochemical, micribiological and virological results are available on request from the corresponding author. 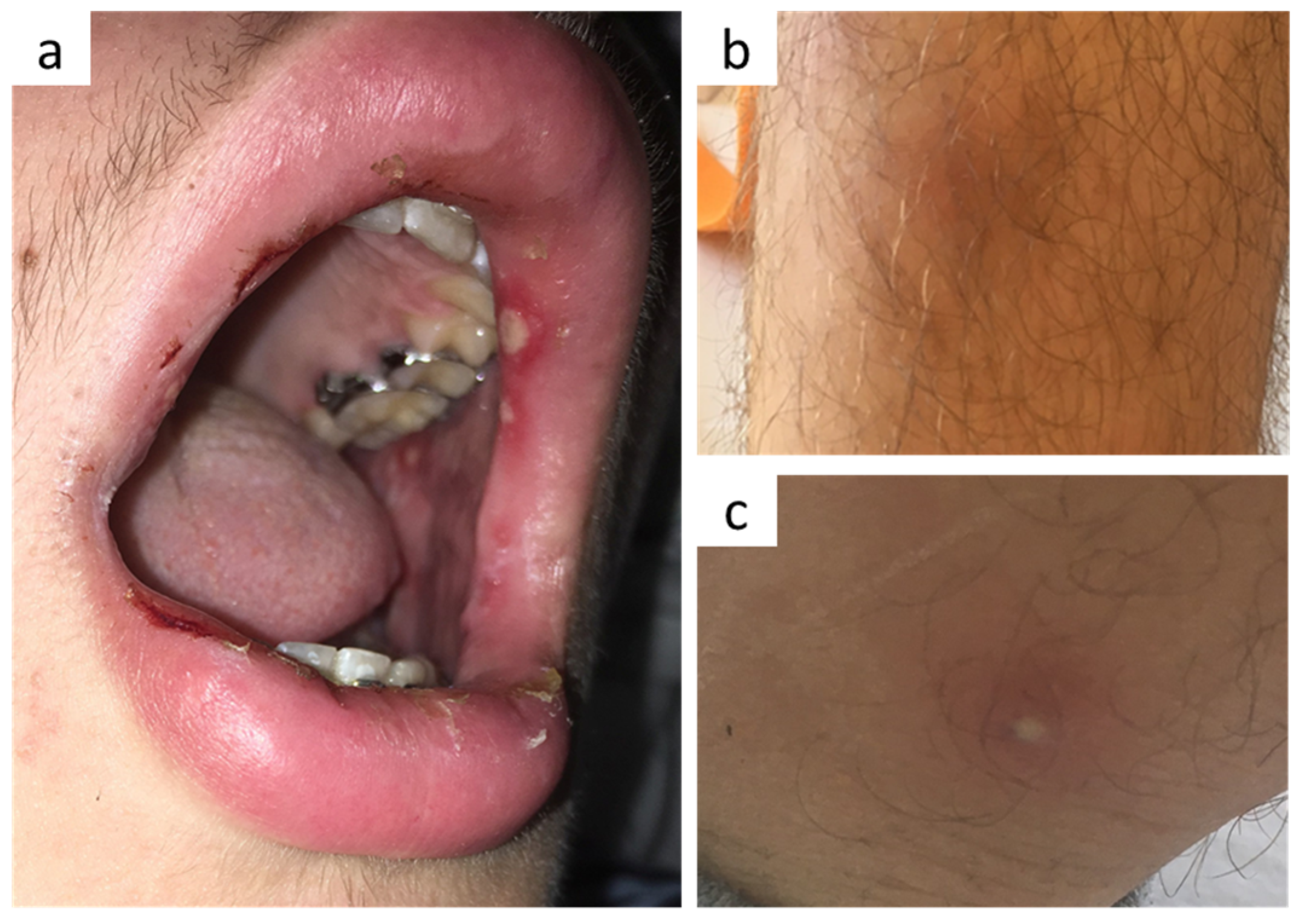