Tilapia lake virus (TiLV), a major pathogen of farmed tilapia, is known to be vertically transmitted. Here, we hypothesize that Nile tilapia (Oreochromis niloticus) broodstock immunized with a TiLV inactivated vaccine can mount a protective antibody response and passively transfer maternal antibodies to their fertilized eggs and larvae. To test this hypothesis, three groups of tilapia broodstock, each containing four males and eight females, were immunized with either a heat-killed TiLV vaccine (HKV), a formalin-killed TiLV vaccine (FKV) (both administered at 3.6 × 106 TCID50 per fish), or with L15 medium. Booster vaccination with the same vaccines was given 3 weeks later, and mating took place 1 week thereafter. Broodstock blood sera, fertilized eggs and larvae were collected from 6–14 weeks post-primary vaccination for measurement of TiLV-specific antibody (anti-TiLV IgM) levels. In parallel, passive immunization using sera from the immunized female broodstock was administered to naïve tilapia juveniles to assess if antibodies induced in immunized broodstock were protective. The results showed that anti-TiLV IgM was produced in the majority of both male and female broodstock vaccinated with either the HKV or FKV and that these antibodies could be detected in the fertilized eggs and larvae from vaccinated broodstock. Higher levels of maternal antibody were observed in fertilized eggs from broodstock vaccinated with HKV than those vaccinated with FKV. Low levels of TiLV-IgM were detected in some of the 1–3 day old larvae but were undetectable in 7–14 day old larvae from the vaccinated broodstock, indicating a short persistence of TiLV-IgM in larvae. Moreover, passive immunization proved that antibodies elicited by TiLV vaccination were able to confer 85% to 90% protection against TiLV challenge in naïve juvenile tilapia. In conclusion, immunization of tilapia broodstock with TiLV vaccines could be a potential strategy for the prevention of TiLV in tilapia fertilized eggs and larvae, with HKV appearing to be more promising than FKV for maternal vaccination. View Full-Text
Keywords: tilapia broodstock; inactivated vaccines; maternal passive immunity; antibody tilapia broodstock; inactivated vaccines; maternal passive immunity; antibody
►▼ Show Figures 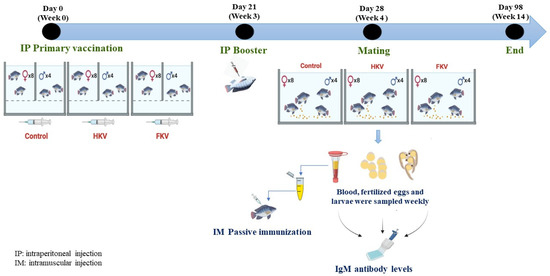