Microalgae represent a promising resource for the production of beneficial natural compounds due to their richness in secondary metabolites and easy cultivation. Carotenoids feature among distinctive compounds of many microalgae, including diatoms, which owe their golden color to the xanthophyll fucoxanthin. Carotenoids have antioxidant, anti-obesity and anti-inflammatory properties, and there is a considerable market demand for these compounds. Here, with the aim to increase the carotenoid content in the model diatom Phaeodactylum tricornutum, we exploited genetic transformation to overexpress genes involved in the carotenoid biosynthetic pathway. We produced transgenic lines over-expressing simultaneously one, two or three carotenoid biosynthetic genes, and evaluated changes in pigment content with high-performance liquid chromatography. Two triple transformants over-expressing the genes Violaxanthin de-epoxidase (Vde), Vde-related (Vdr) and Zeaxanthin epoxidase 3 (Zep3) showed an accumulation of carotenoids, with an increase in the fucoxanthin content up to four fold. Vde, Vdr and Zep3 mRNA and protein levels in the triple transformants were coherently increased. The exact role of these enzymes in the diatom carotenoid biosynthetic pathway is not completely elucidated nevertheless our strategy successfully modulated the carotenoid metabolism leading to an accumulation of valuable compounds, leading the way toward improved utilization of microalgae in the field of antioxidants. View Full-Text
Keywords: diatoms; Phaeodacytlum tricornutum; carotenoids; fucoxanthin; genetic engineering diatoms; Phaeodacytlum tricornutum; carotenoids; fucoxanthin; genetic engineering
►▼ Show Figures 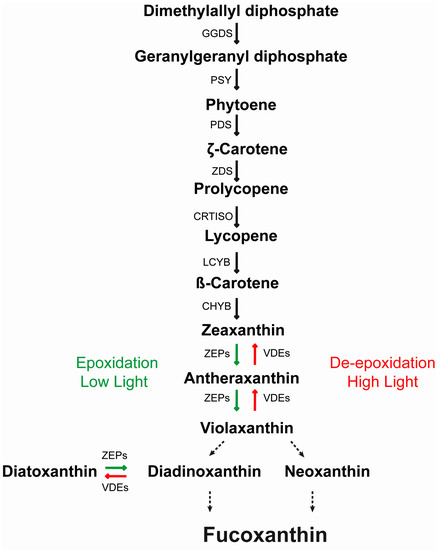