Faced with growing consumer demand for bio-based or natural products and the need to become less dependent on fossil resources, industry is turning to eco-friendlier products and processes. In this context, lignin and related chemicals (e.g., lignans, phenolic acids) appear as a valuable source of sustainable aromatic building blocks [1,2]. Indeed, p-hydroxycinnamic acids and their derivatives can be readily extracted from different biomasses and be further (chemo-)enzymatically modified [3,4,5,6] to provide them with physicochemical and biological properties of interest in various fields, such as antioxidants [7,8,9] and anti-UV compounds [10,11,12]. However, p-hydroxycinnamic acids and their derivatives are not only poorly water soluble, but also they are usually present in relatively small quantities in biomass, thus greatly limiting their uses at the industrial scale. To overcome the latter issue, many synthetic methods have been designed to access p-hydroxycinnamic acids in high yield and at large scale from commercially available reagents. Among them, the main synthetic route consists in the condensation of malonic acid with p-hydroxybenzaldehydes through the Knoevenagel–Doebner reaction.
Usually, Knoevenagel–Doebner reactions require a large amount of pyridine as a solvent and an amine catalyst, such as aniline or piperidine [13]. However, both reagents are toxic and induce serious health damage [14]. In order to design more sustainable synthetic procedures, few alternatives based on green chemistry principles have emerged [15]. For instance, ionic liquids can substitute pyridine and represent an interesting alternative thanks to their recyclability [16,17,18]. Nevertheless, their use is still limited in industrial scale-up [19]. Preferably, the reaction can also be carried out in water, which makes it industrially more viable [20,21,22]. When it comes to reagents, petro-sourced nitrogen catalysts can be substituted by amino acid: especially proline [23,24,25,26]. Recently Peyrot et al. described an access to naturally-occurring phenolic acids by replacing pyridine/aniline-mediated classical Knoevenagel–Doebner reaction by a proline-mediated one in ethanol while achieving excellent yields [27]. It is noteworthy to mention that the reaction time can also be shortened using a microwave-activated Knoevenagel–Doebner reaction as demonstrated by Mouterde et al. [28].
Whatever the synthetic procedure used, Knoevenagel–Doebner condensation always produces p-hydroxycinnamic diacids as intermediates, and such diacids are advantageous compared to the corresponding monoacid as they are more water soluble thanks to the extra carboxylic acid moiety. Unfortunately, during the condensation, the diacids are easily transformed into the p-hydroxycinnamic acids through decarboxylation. In 2007, Bermudez et al. highlighted the importance of the reaction time, the base, and the temperature used for this decarboxylation step [29]. In fact, when the reaction temperature is above 50 °C, decarboxylation is favored and leads to p-hydroxycinnamic acids. Conversely, at low temperature, the formation of the diacid may be preferred at the expense of p-hydroxycinnamic acid formation. To the best of our knowledge, only a few synthetic pathways to p-hydroxycinnamic diacid have been reported in the literature. Conventionally, access to this type of diacid requires the protection/deprotection of the two carboxylic acid moieties functions. The use of protective group such as tert-butyl ester is well described in the literature [30,31]. Malonic acid is first esterified to provide the corresponding di-tert-butyl malonate, and the latter then undergoes a Knoevenagel reaction with the p-hydroxybenzaldehyde required. The reaction is generally carried out in the presence of piperidine, in toluene or ethanol [30]. The resulting diester is then deprotected in the presence of trifluoroacetic acid (TFA) generally in a modest yield (35%) [31]. Mangala et al. proposed an organometallic-based pathway using titanium polycarbosilane (Ti-PCS) in ethyl acetate, allowing them to obtain a conversion, evaluated by HPLC, higher than 90% [32]. More recently, a solvent-free approach was proposed by Schijndel et al. in the presence of ammonium bicarbonate, at 90 °C for two hours. Under these conditions, the conversion of the vanillin into the corresponding ferulic diacid was evaluated at 22% by HPLC [33]. These three synthetic pathways are highlighted in the Figure 1.
Although the reaction conditions of the above procedures are globally in line with the green chemistry principles and HPLC conversions are promising, isolated yields remain relatively low [31] or not described [32,33]. Additionally, Mangala et al.’s [32] (Figure 1, pathway 2) method uses titan derivatives (Ti-PCS) as catalyst. Titan derivatives, such as TiO2, are widely described as detrimental for the environment or DNA so limiting the use of such as metal catalysts would be relevant [34,35,36]. Under these considerations, in this work, we therefore sought to develop a synthetic pathway that provides p-hydroxycinnamic diacids in high yield and at the multigram scale while being environmentally friendly. Moreover, with p-hydroxycinnamic diesters being reported as having high anti-UV and antioxidant properties [10,11,37], a specific focus has also been put on the evaluation of the radical scavenging and UV filtering capacities of the p-hydroxycinnamic diacids.

The determination of the radical scavenging activity of the diacids was determined via 2,2-diphenyl-1-picrylhydrazyl (DPPH) assay. These tests involved adding potential antiradical molecule solution in ethanol at different concentrations to homogeneous DPPH solution. The study was performed under stirring for 7 h 25 min on the following concentration scale: 400, 200, 100, 50, 25, and 12.5 µM. Every 5 min, the absorbance was measured at 520 nm. At the end, the percentage curves of %DPPH (blue) and %reduced DPPH (green) were plotted in Regressi® software using an average of the last six points. The amount needed to reduce the initial number of DPPH free radicals by half, i.e., EC50, was provided by the crossing point of %DPPH (blue) and %reduced DPPH (green).

Herein, we report a new synthetic pathway to bio-based p-hydroxycinnamic diacids. Wishing to respect green chemistry principles, such as the use of non-toxic solvent and reactants, atom economy with the use of minimal equivalent of proline and malonic acid, and the use of naturally-occurring p-hydroxybenzaldehydes, this pathway was optimized on ferulic diacid through a design of experiments. The optimal conditions were then successfully applied to three others naturally-occurring p-hydroxybenzaldehydes, providing the four desired bio-based p-hydroxycinnamic diacids in good yields (60–80%). The four diacids showed not only interesting UV properties covering the UV-A and UV-B regions but also great photostability, particularly coumaric, and caffeic diacids. Coumaric diacid showed similar UV properties than Octinoxate™ and could be considered as an interesting alternative to this controversial compound. With regards to antiradical activity, sinapic and caffeic diacids proved to be potent antioxidant and potential alternative to BHA [46] and BHT [47] that are now classified as endocrine disruptors, carcinogens, and are withdrawn from the market in some countries. With regards to their valuable properties, sinapic and caffeic diacids could be seriously considered as potential new antioxidant agents in cosmetic, biomaterial or food industry. 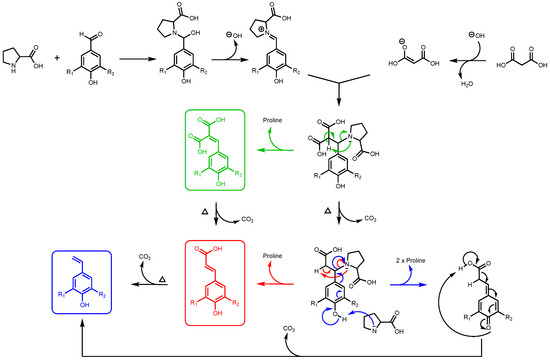 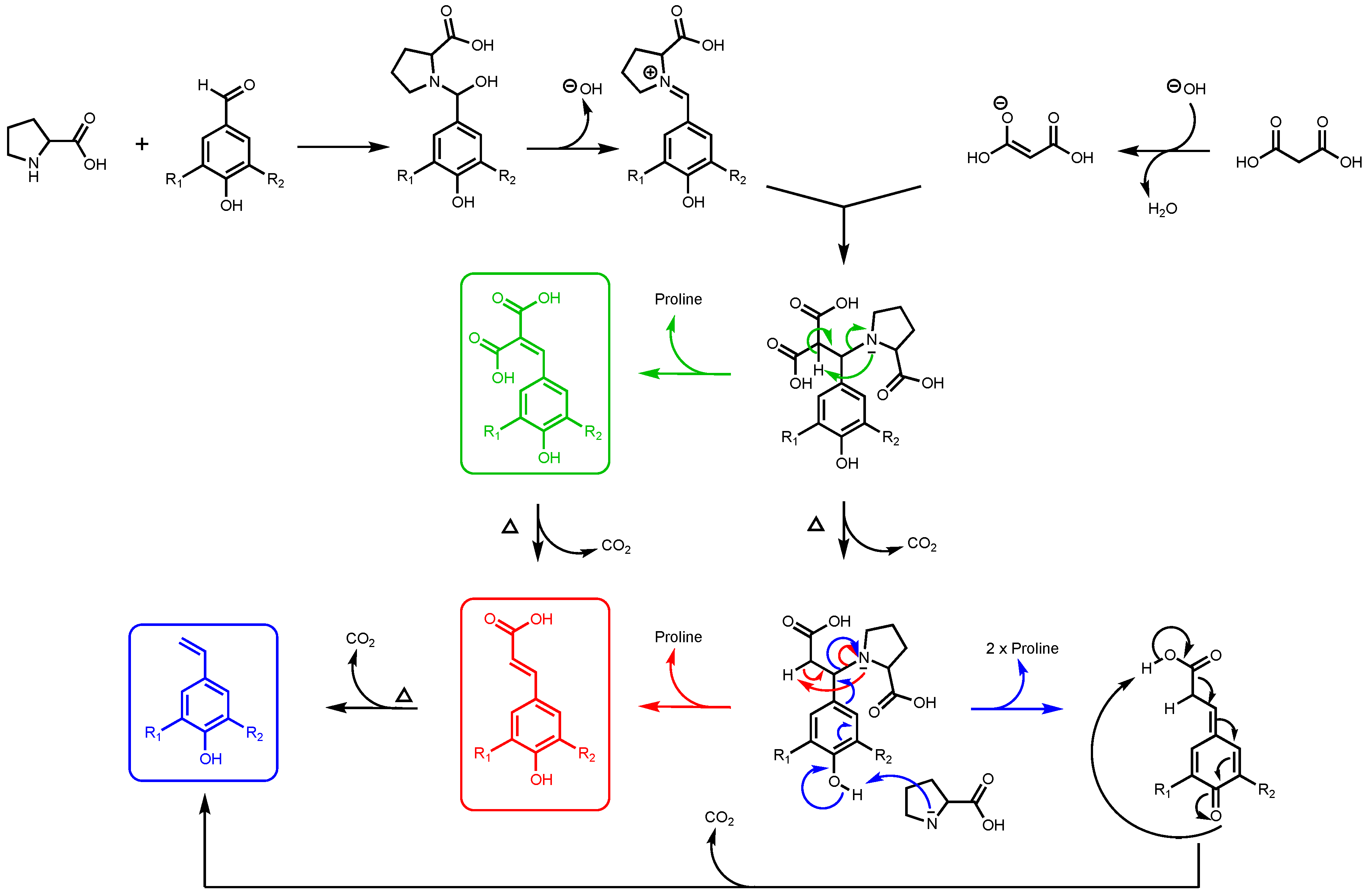 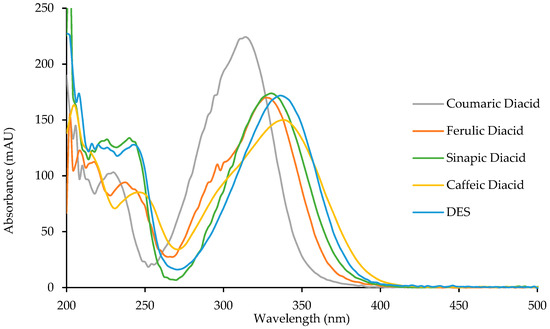 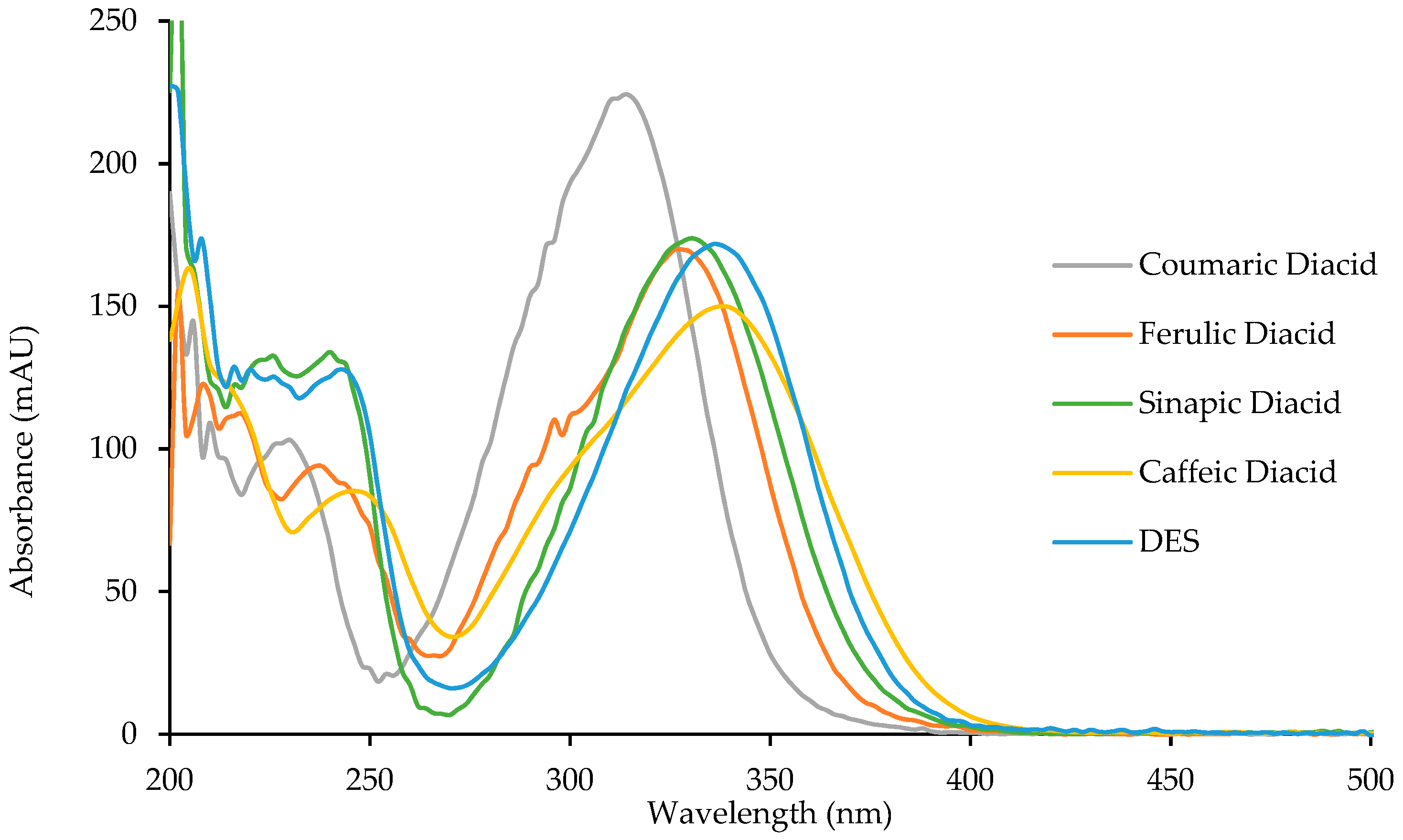 Table 7. Antiradical activities.
Table 7. Antiradical activities.
[a] No EC50 was obtained at studied concentrations.
© 2020 by the authors. Licensee MDPI, Basel, Switzerland. This article is an open access article distributed under the terms and conditions of the Creative Commons Attribution (CC BY) license (http://creativecommons.org/licenses/by/4.0/).
We use cookies on our website to ensure you get the best experience. Read more about our cookies here.
Accept
We have just recently launched a new version of our website. Help us to further improve by taking part in this short 5 minute survey here. here.
Never show this again