Food allergies are a very serious problem among consumers. The most common food allergies involve animal products, but they can also involve fruits such as berries. We aimed to determine whether organic farming is useful for the production of high-quality and safe fruits. Three varieties of raspberries ‘Laszka’, ‘Glen Ample’ and ‘Polka’ from organic and conventional production (neighboring farms) were collected over the two years of the experiment. Quantitative and qualitative analysis of phenolic compounds was carried out, and the content of Bet v1 and profilin was determined. The organic raspberries contained a lower level of phenolic compounds, especially anthocyanins. Conventional fruits were characterized by a higher allergenic potency than organic ones. We found a strong link between their anthocyanin content and the allergy status of conventional raspberry fruits. Therefore, organically produced raspberries are safer for consumers.
Keywords: allergenic potency; anthocyanins; flavonoids; organic; raspberry allergenic potency; anthocyanins; flavonoids; organic; raspberry

Raspberries are one of the most popular fruits in Europe. They are recognized by consumers as tasty and healthy fruits. Many studies have shown that regular fruit consumption can diminish the risk of many chronic diseases—such as neurodegenerative conditions, type 2 diabetes, some kinds of cancer, cardiovascular diseases, hypertension, overweight and obesity [1,2,3,4,5]—due to their biologically active compounds content. Plants in organic agriculture are cultivated without the use of artificial pesticides and mineral fertilizers. Only natural methods of plant protection and fertilization are allowed (Council Regulation (EC), 2007) [6]. Polyphenols are a large group of secondary metabolites produced by plants as a response to biotic and abiotic environmental stresses [7]. Organic raspberries contain significantly more bioactive compounds than conventionally raised berries [8]. The consumption of organic raspberries could, therefore, be more health promoting, due to the higher content of biologically active compounds in the fruits. On the other hand, it should be remembered that the consumption of raspberries carries the risk of food allergies. Reports on the allergenicity of small fruits (berries)—such as strawberries, raspberries, blackberries and blueberries—are still scarce, but they do exist [9]. During the last ten years, the prevalence of food allergies has increased up to 4% among adults and 6% among children. In berry fruits, a substantial proportion of the allergens have defense-related functions, and their expression is highly influenced by exposure to biotic and abiotic stress and diseases. Pathogenesis-related proteins (PRs) account for approximately 25% of plant food allergens, and some are responsible for extensive cross-reactions between plant-derived foods, pollen and latex allergens [10]. Bet v 1 is the most frequent cause of pollen-related food allergies [11], which are the most frequent type of food allergy in adults. The clinical symptoms observed are elicited by Bet v 1-induced IgE, which can then cross-react with a number of Bet v 1-related proteins from plant-derived foods. In raspberry fruits, only two allergenic proteins, including different isoforms, have been identified and described. The Rub i 1 and Rub i 3 allergens in raspberry (Rubus idaeus L.) belong to the PR-10 group (17 kDa) and are homologous to the major birch pollen Bet v1 [12]. The biological function of these raspberry allergens is still unknown, and their protein sequence is highly variable within the same species [13]. A high degree of structural homology has been demonstrated between Fra a 1 (strawberry), Mal d 1 (apple) and Bet v 1 from birch [14,15] and between PR-10 proteins from different Rosaceae fruits [16]. Rub i 1 and Rub i 3 are mainly responsible for the raspberry allergies occurring among berry fruit consumers. Profilins are the most widespread allergens throughout the plant kingdom. They are concentrated in the fruit cells’ cytosol. The molecular mass of profilins is 12-15 kDa, and their molecular structure is highly conserved, with 70%–85% homology among different species [17]. Inhibition experiments with serum pools from patients with fruit allergies have demonstrated cross-reactivity among the profilins Pru a 4, Fra a 1, and Fra a 3 [18].
In the present study, we aimed to identify and determine the content of bioactive compounds such as anthocyanins and the analogues of the most common panallergen Bet v 1 and the profilin content in different raspberry cultivars from organic and conventional cultivation. In the present literature, there is a complete lack of information about bioactive compound contents and the allergenic potential of raspberry cultivars. We investigated to see if there was a link between the flavonoid (anthocyanin) content in fruits and their allergenic status. The main hypothesis of the presented manuscript was to determine whether anthocyanin levels could be a determinant of the level of allergenic protein concentrations in raspberry fruit. If there is a relationship between anthocyanin concentration and potentially allergenic factors. Importantly, the present experiment was conducted over two years to be sure that the obtained results were not just a random effect.

The experiment was carried out in 2013–2014. Three raspberry cultivars were used for the experiment: ‘Laszka’, ‘Glen Ample’ and ‘Polka’. The experiment was conducted on the products of private farms: two organic and two conventional. All data about the farms’ locations and the methods used for farm management, the kind and dose of fertilizers used, and the methods used for plant protection at the time of cultivation are presented in Table 1. Detailed information on the weather forecast (minimum and maximum temperatures, number of hours of sunshine per day and rainfall) in the experimental area are presented in Figure 1.

For chemical analysis, the fruits of all cultivars from each of the experimental farms were harvested early in the morning and immediately transported (in cooling boxes) to the laboratory. A total of 250 g of fruits per sample were used in the analyses. All samples were freeze-dried using a Labconco (2.5) freeze-dryer (Warsaw, Poland, −50 °C, pressure 0.100 mBa). After the freeze-drying process, the plant material was ground in a laboratory mill A-11 (IKA®, Königswinter, Germany). The ground samples were then stored at −80 °C to avoid bioactive compound losses.

The first step of sample purification for the anthocyanin analysis was combined with the analysis of the polyphenols. The samples were extracted with 80% methanol. After the first centrifugation (see the previous section), 2.5 mL of supernatant was collected into a new plastic tube, and then 2.5 mL of 10 mol HCl and 5 mL of 100% methanol were added. The samples were gently shaken and put in a refrigerator (5 °C, 10 min). Next, 1 mL of extract was transferred into HPLC vials and analyzed. The anthocyanins were separated under isocratic conditions with a flow rate of 1.5 mL/min. One mobile phase, 5% acetic acid, methanol and acetonitrile (70:10:20), was used. HPLC set was performed from modules: two pumps (LC-20AD), one controller (CBM-20A), column oven (SIL-20AC), one spectrometer (UV/Vis SPD-20 AV). Phenomenx Fusion 80-A (4.6 × 250 mm, practical shape 4 µm) column (C18) was used. The analysis time was 10 min at a wavelength of 570 nm. The anthocyanins were identified by using 99.9% pure standards (Sigma-Aldrich) and the retention times for the standards [20].

The results obtained from the chemical analyses were statistically analyzed using Statgraphics Centurion 15.2.11.0 software (StatPoint Technologies, Inc., Warranton, VA, USA). The values presented in the tables are expressed as the mean values for the organic and conventional cultivation systems for the three raspberry cultivars ‘Laszka’, ‘Glen Ample’ and ‘Polka’. The statistical calculations were based on a two-way analysis of variance using Tukey’s test (p = 0.05). A lack of statistically significant differences between the examined groups is indicated by labelling with the same letters. A standard error (SE) is given for each mean value reported in the tables. To obtain a better picture of the correlation between the identified biologically active compounds and the allergenic proteins, a Principle Component Analysis (PCA) was used. The PCA figures were made using XLStat Trial version (Microsoft Excel, Chicago, IL, USA). Another correlation was demonstrated by calculating Pearson’s coefficients.

Considering the obtained results, organic raspberry could be more useful for those consumers suffering from slight allergy symptoms. The higher level of anthocyanins could be used as an indicator for the concentration of allergy proteins.

This paper has been published with the support of the Polish Ministry of Higher Education within the foundation of the Institute of Human Nutrition Sciences, Warsaw University of Life Sciences (WULS), for scientific research. 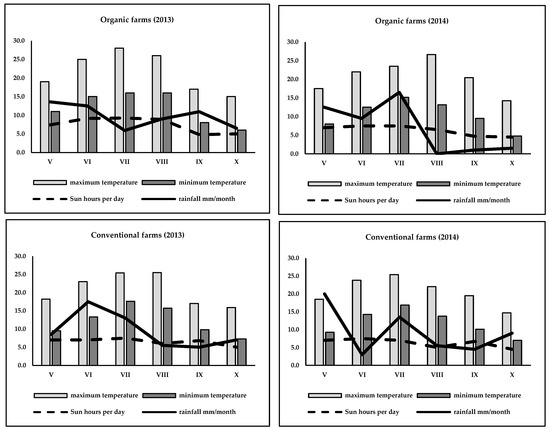 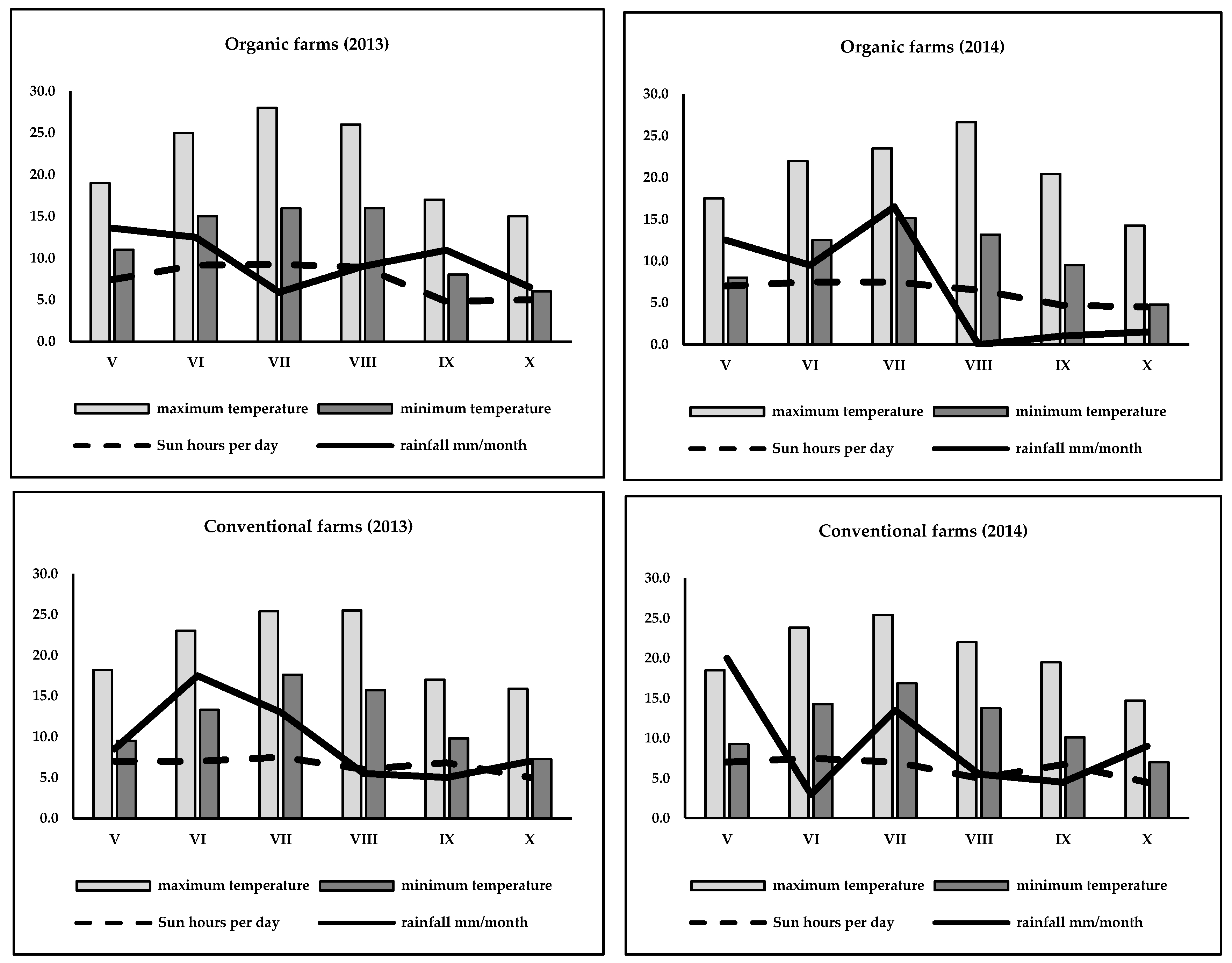 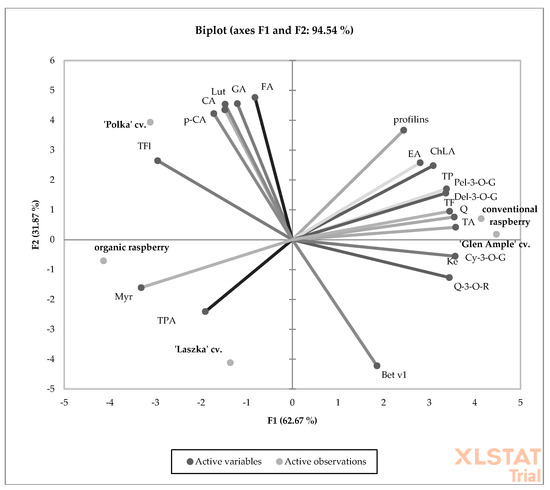 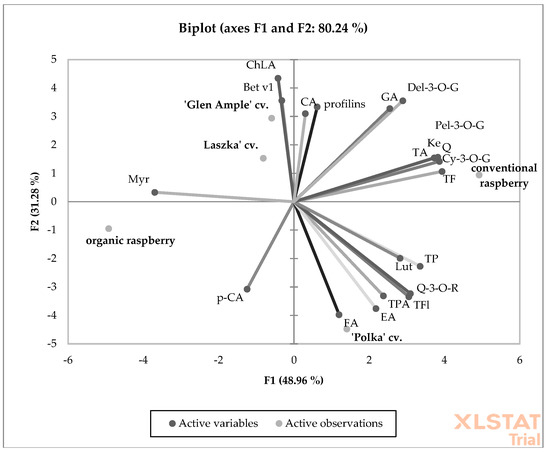 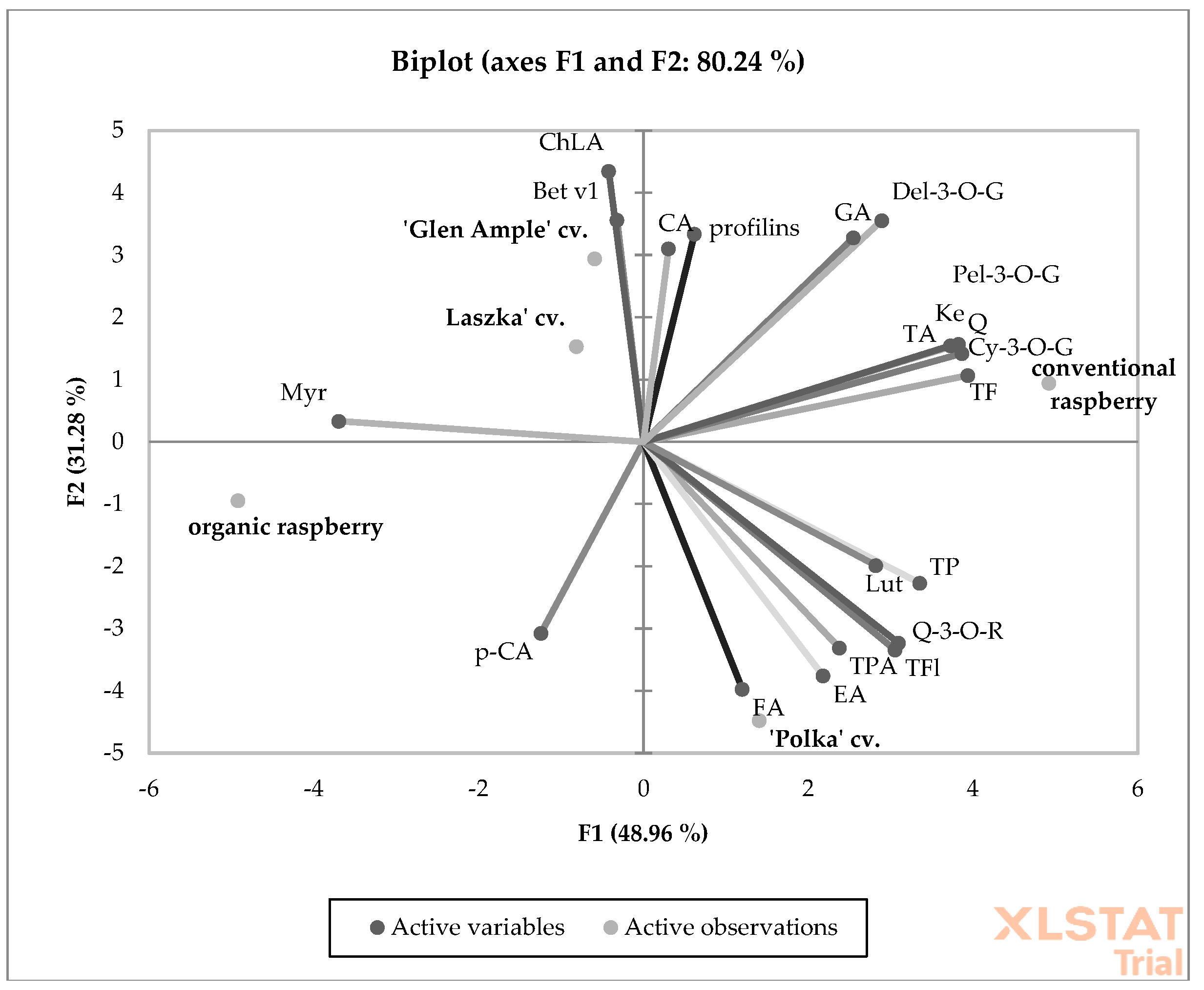