Gamma Tocopherol Reduced Chemotherapeutic-Induced ROS in an Ovarian Granulosa Cell Line, But Not in Breast Cancer Cell Lines In Vitro

Inflammation in Post-Traumatic Stress Disorder (PTSD): A Review of Potential Correlates of PTSD with a Neurological Perspective

:
Post-traumatic stress disorder (PTSD) is a chronic condition characterized by symptoms of physiological and psychosocial burden. While growing research demonstrated signs of inflammation in PTSD, specific biomarkers that may be representative of PTSD such as the detailed neural correlates underlying the inflammatory responses in relation to trauma exposure are seldom discussed. Here, we review recent studies that explored alterations in key inflammatory markers in PTSD, as well as neuroimaging-based studies that further investigated signs of inflammation within the brain in PTSD, as to provide a comprehensive summary of recent literature with a neurological perspective. A search was conducted on studies published from 2009 through 2019 in PubMed and Web of Science. Fifty original articles were selected. Major findings included elevated levels of serum proinflammatory cytokines in individuals with PTSD across various trauma types, as compared with those without PTSD. Furthermore, neuroimaging-based studies demonstrated that altered inflammatory markers are associated with structural and functional alterations in brain regions that are responsible for the regulation of stress and emotion, including the amygdala, hippocampus, and frontal cortex. Future studies that utilize both central and peripheral inflammatory markers are warranted to elucidate the underlying neurological pathway of the pathophysiology of PTSD.
Keywords:
inflammation; oxidative stress; post-traumatic stress disorder; cytokines; neuroimaging; magnetic resonance imaging

A literature search was conducted using two major electronic databases: PubMed (https://www.ncbi.nlm.nih.gov/pubmed/) and Web of Science (https://clarivate.com/webofsciencegroup/solutions/web-of-science/). The search was performed under a filter such that studies published from January of 2009 through November of 2019 were included. The following keywords were used as search terms: (1) “inflammation” AND “PTSD”, (2) “inflammation” AND “PTSD” AND “magnetic resonance”, (3) “oxidative stress” AND “PTSD”, (4) “oxidative stress” AND “PTSD” AND “magnetic resonance”. Records obtained from the literature search were reviewed such that duplicates of articles identified between the two databases were removed, and the remaining records were assessed for eligibility and excluded accordingly, under the following eligibility criteria.

Studies included in the current review were first screened such that they were original research articles using a human cohort, with a target population of PTSD that also explored the alteration in inflammatory state. The following records were to be excluded as part of the screening process: (1) records that are not original research including review papers, conference abstracts, short communications, or commentaries, (2) studies that used animal models, in vitro models, or post-mortem studies, (3) records that were not in English language, or (4) study designs that did not investigate inflammation in a target population of PTSD. After the screening process, the eligibility of the remaining articles was assessed using a full-text review. Articles that met the following criteria were further excluded: (1) studies that investigated PTSD with other comorbid disorders, diseases, or medical conditions (i.e., bipolar disorder, major depressive disorder, cardiovascular disease, myocardial infarction, etc.), or (2) studies that performed clinical trials or other forms of intervention as part of the study design. In addition, studies that investigated the inflammatory state in PTSD from a pediatric sample population were excluded, as well as target population of childhood onset trauma, as previous literature noted that the time lag between the time of trauma and time of assessment or sampling may influence the degree of alteration in inflammatory cytokine levels [24].

3.1. Results from the Literature Search

A total of 572 articles were identified after the literature search conducted under the databases PubMed and Web of Science. Upon the search and identification of records, duplicate records between the two databases were removed, followed by the screening of titles and abstracts of the studies. The screening process excluded a total of 254 studies as according to the eligibility criteria mentioned above in the Materials and Methods section. After careful consideration and full-text review of the remaining records according to the eligibility criteria, 75 studies were removed. After the inclusion of 11 studies through cross-referencing and reviewing of the records, and a total of 50 studies were included in this review. Individuals with PTSD who were participants of studies that were included in this review were exposed to various types of trauma, including accidents such as surviving a car crash, fire, or natural disaster, victims of various crimes including physical assault, sexual violence, or domestic abuse, exposure to combat such as military personnel or police officers, and other forms of trauma that were not specified. Among the 50 articles selected for this review, 43 were studies that explored serum inflammatory cytokine markers as measures of inflammation, 4 were studies exploring PTSD- and oxidative stress-related genes, while the remaining 3 were neuroimaging-based studies that explored the neural correlates of inflammation in PTSD. A detailed summary of the literature search process and the screening and inclusion of the eligible studies for the current review is shown in Figure 1.

3.2. Alterations of Serum Inflammatory Markers in Association with PTSD

3.3. Roles of PTSD- and Oxidative Stress-Related Genetic Markers in PTSD

Five studies explored specific genes that have been previously suggested to be of significance in PTSD and oxidative stress, which included the investigation of the ALOX12 and ALOX15 [74], BDNF [75,76], and RORA [77,78]. In summary, studies based on individuals who were exposed to combat-related trauma demonstrated inconsistent findings, where one reported that veterans with PTSD have higher frequencies of the Met/Met and 66Met alleles as compared with veterans without PTSD [75], while another demonstrated that the frequencies of the two alelles were similar between the veteran groups [76]. While the findings from the two studies are contrasting, it is noteworthy that both studies strictly included trauma-exposed veterans without the inclusion of a healthy control group that has not been exposed to trauma, and the studies vary in sex distribution. Furthermore, Bruenig and colleagues (2016) have noted that the low Met/Met genotype frequencies in their sample may have influenced the results also [76].
Two other studies have explored the association between single nucleotide polymorphism (SNP) in the RORA gene with PTSD, where both studies found the same SNP within the RORA gene (rs8042149) to be significantly associated with the presence of PTSD [77,78]. Considering that the RORA gene is expressed in neurons and brain structures as to serve neuroprotective roles within the brain such as in response to oxidative stress [77], these findings indicate that RORA may be a marker for assessing one’s capability in neuroprotection towards oxidative stress or inflammation, therefore a potential marker for an individual’s risk or resilience towards developing PTSD. The two genes ALOX12 and ALOX15 were also assessed in one study [74], which demonstrated that the ALOX12 locus (rs1042357 and rs10852889) significantly moderated the association between PTSD diagnosis and reduced cortical thickness in the brain, whereas the ALOX15 locus did not moderate in this association.
A detailed description of the studies exploring PTSD- and oxidative stress-related genetic markers in relation to PTSD is provided in Table 3 and Table 4.

3.4. Brain Alterations in Relation to Inflammation and Oxidative Stress in PTSD

This work was supported by the Brain Research Program through the National Research Foundation of Korea (NRF) funded by the Ministry of Science and ICT (2015M3C7A1028373) and the ICT R&D program of Institute for Information & Communications Technology Promotion (B0132-15-1001).

The authors thank Shinhye Kim for her technical support and contribution towards the preparation of the tables and figures. 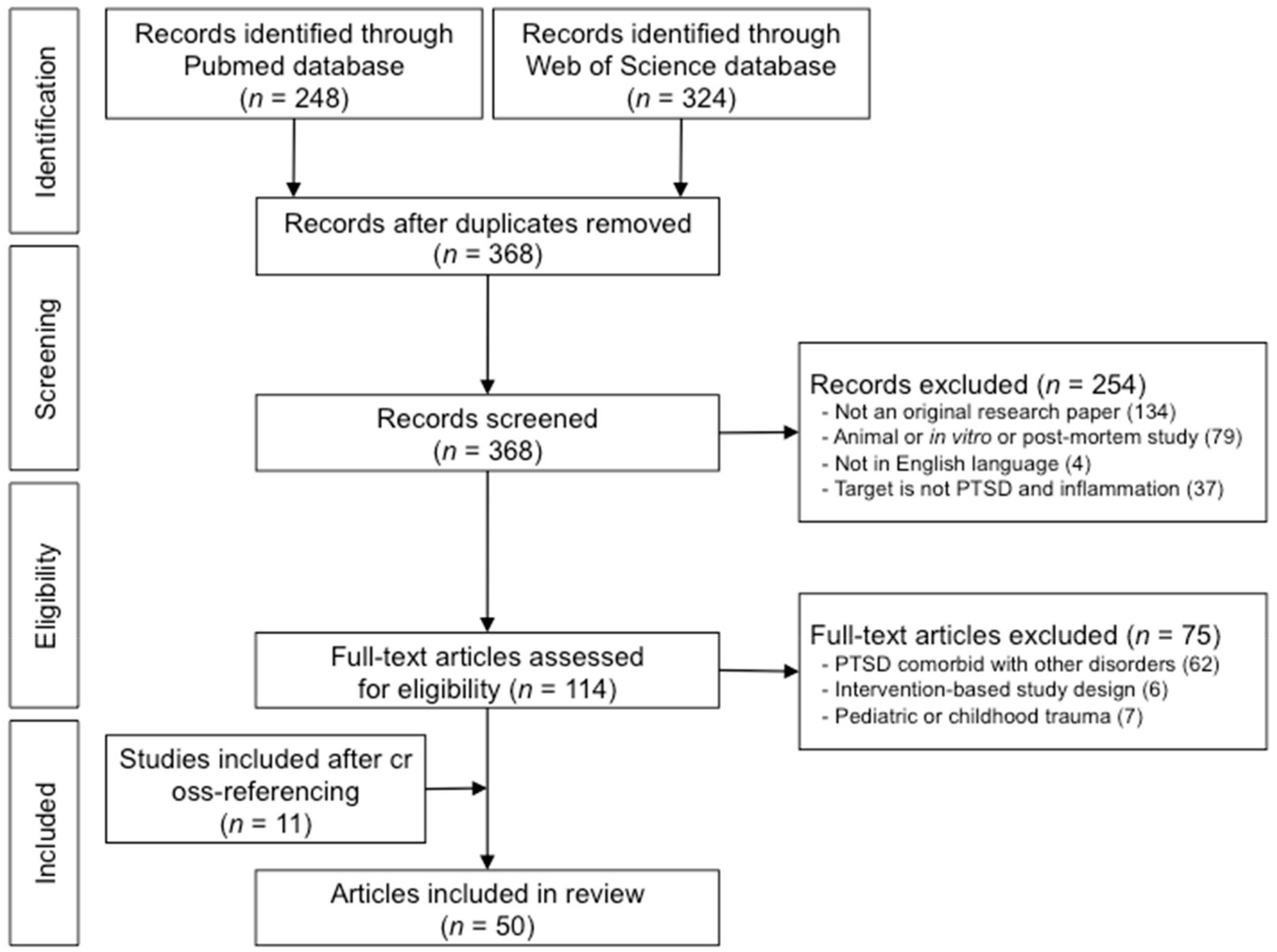