Recent Advances on the Anti-Inflammatory and Antioxidant Properties of Red Grape Polyphenols: In Vitro and In Vivo Studies

Neuroinflammation is a common feature shared by neurodegenerative disorders, such as Parkinson’s disease (PD), and seems to play a key role in their development and progression. Microglia cells, the principal orchestrators of neuroinflammation, can be polarized in different phenotypes, which means they are able to have anti-inflammatory, pro-inflammatory, or neurodegenerative effects. Increasing evidence supports that the traditional Mediterranean dietary pattern is related to the reduction of cognitive decline in neurodegenerative diseases. A considerable intake of plant foods, fish, and extra virgin olive oil (EVOO), as well as a moderate consumption of red wine, all characteristic of the Mediterranean diet (MD), are behind these effects. These foods are especially rich in polyphenols, being the most relevant in the MD hydroxytyrosol (HT) and their derivatives present in EVOO, which have demonstrated a wide array of biological activities. Here, we demonstrate that HT is able to reduce the inflammation induced by two different stimuli: lipopolysaccharide and α-synuclein. We also study the possible molecular mechanisms involved in the anti-inflammatory effect of HT, including the study of nuclear factor kappa B (NF-κB), mitogen-activated protein kinases (MAPKs), nicotinamide adenine dinucleotide phosphate (NADPH) oxidase, and inflammasome. Our data support the use of HT to prevent the inflammation associated with PD and shed light into the relationship between MD and this neurological disorder. View Full-Text
Keywords: hydroxytyrosol; microglia; Mediterranean diet; inflammasome; MAPKs; lipopolysaccharide; α-synuclein hydroxytyrosol; microglia; Mediterranean diet; inflammasome; MAPKs; lipopolysaccharide; α-synuclein
►▼ Show Figures 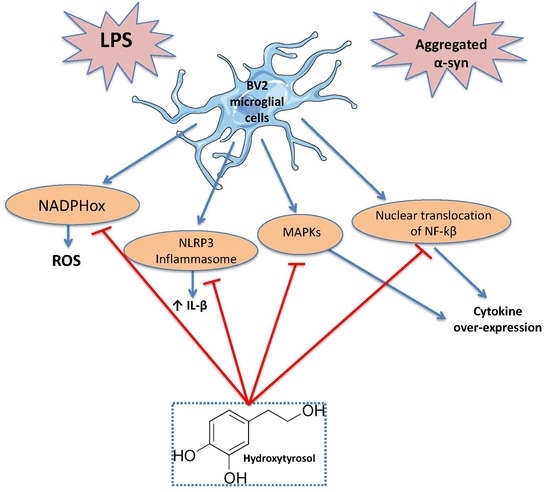