A Comprehensive Review on Lipid Oxidation in Meat and Meat Products

Methotrexate (MTX), a folic acid antagonist, is a potent chemotherapeutic agent used in the treatment of malignancies and inflammatory diseases [1]. However, some restrictions have been made on its clinical applications because of its nephrotoxicity and other adverse effects [2,3,4]. Renal dysfunction is thought to be provoked by the precipitation of MTX, 7-hydroxy MTX, and 2, 4-diamino-N10-methylpteroic acid in the renal tubules, resulting in cell death and consequent infiltration of inflammatory cells [3,5]. Although the mechanism of MTX nephrotoxicity is not fully understood, it has been reported to involve excess production of reactive oxygen species (ROS), inflammation, mitochondrial dysfunction, DNA damage, and caspase activation, eventually culminating in renal dysfunction [4,6,7,8].
One of the untoward effects of MTX is its ability to promote ROS production, leading to inflammation and cell death. As reported previously, MTX has the ability to increase the production of ROS through provoking nicotinamide adenine dinucleotide phosphate (NADPH) depletion [9], neutrophils activation [10], and suppression of homocysteine remethylation [11]. Excess ROS can activate nuclear factor-kappaB (NF-κB) and the release of proinflammatory cytokines [12], and trigger mitochondrial dysfunction and apoptosis [13]. Given the role of ROS and oxidative stress in the development of MTX nephrotoxicity, the induction of antioxidant and cytoprotective enzymes is critical. Indeed, the cell is well equipped with a variety of antioxidants that serve to protect against various redox insults. Multiple lines of evidence suggested a key role for nuclear factor (erythroid-derived 2)-like 2 (Nrf2) in the cellular defense against oxidants and the regulation of expression of several antioxidant and cytoprotective genes [14]. Under physiological conditions, Kelch-like ECH associated protein 1 (Keap1) sequesters Nrf2 in the cytosol via binding to the N-terminal Neh2 domain. This binding facilitates Nrf2 degradation via the ubiquitin-dependent proteasomal system [15]. However, various oxidant and toxic insults disturb this sequestration, thereby inducing the nuclear translocation of Nrf2 and its binding to the antioxidant response element (ARE) and expression of antioxidant genes, including NADPH-quinone oxireductase 1 (NQO1) and heme oxygenase 1 (HO-1) [15,16]. Nrf2 signaling activation has been implicated in ameliorating drug-induced oxidative stress and organ damages [6,17,18,19,20]. On the contrary, Nrf2 deficiency was associated with a greater severity of renal injury in a mouse model of ischemic and nephrotoxic acute kidney injury (AKI) [21].
Several studies have demonstrated the renoprotective effects of various antioxidants in animal models of AKI [6,7,22]. Formononetin (FN, 7-Hydroxy-4′-methoxyisoflavone) is a bioactive isoflavone constituent of the red clover (Trifolium pratense) and Astragalus membranaceus [23]. It has been shown to have numerous medicinal benefits, such as antioxidant, anti-inflammatory, and antitumor activities [23,24,25,26]. FN prevented cisplatin-induced AKI and inhibited apoptosis of renal tubular cells [27], and attenuated lipopolysaccharide (LPS)-induced inflammation and lung injury in mice [25]. In addition, FN was found to protect pancreatic β-cell against apoptosis by inhibiting the activation of NF-κB and reducing nitric oxide (NO) generation in rat insulinoma cell line [28]. A recent study showed that FN maintained kidney function by inhibiting ROS overproduction and restoration of antioxidants in a rat model of diabetic nephropathy [29]. Furthermore, FN exhibited antitumoral actions in a myeloma model through the regulation of multiple oncogenic cascades and gene products [23]. Despite the described biological activities of FN, its ability to ameliorate MTX-induced AKI has not been demonstrated yet. We investigated the protective effect of FN against AKI in MTX-administered rats, pointing to its ability to suppress oxidative stress and inflammation, and the role of Nrf2 signaling.

2.2.1. Determination of Creatinine and Urea

2.2.2. Determination of Kim-1, Caspases and Cytokines

Total HO-1 activity was measured following the method of Abraham et al. [39]. Briefly, tissue samples were mixed with 2 mM glucose-6-phosphate, 0.8 mM NADPH, 20 µM hemin, and 0.2 U glucose-6-phosphate dehydrogenase in a total volume of 1.2 mL. After incubation at 37 °C for 1 h, the absorbance was measured at 464 nm, and the activity was normalized to the control group.

Adenosine triphosphate (ATP) content in the renal homogenate was measured using a kit supplied by Sigma (St. Louis, MO, USA). In this test, ATP is determined by phosphorylating glycerol, and the product is proportional to the amount of ATP in the sample and is determined calorimetrically at 570 nm.

Specimens from kidney fixed in 10% buffered formalin were dehydrated, embedded in paraffin wax and cut into 5-μm sections. Following deparaffinization and rehydration, the sections were processed for hematoxylin and eosin (H&E) staining and then examined.

The effect of MTX and FN on the mRNA expression levels of inducible nitric oxide synthase (iNOS), BAX, BCL-2, cyclooxygenase-2 (COX-2), IL-1β, TNF-α, Nrf2, HO-1, and caspase-3 was quantified using qRT-PCR, as previously reported [40,41,42]. Isolation of RNA from the frozen kidney samples was performed using TRIzol reagent (Invitrogen, Waltham, MA, USA). Following treatment with RNase-free DNase (Qiagen, Düsseldorf, Germany), RNA was quantified on a nanodrop, and samples with A260/A280 nm > 1.7 were reverse transcribed into cDNA. PCR amplification of the cDNA was carried out using SYBR Green master mix and the primers listed in Table 1. The amplification data were analyzed by the 2−ΔΔCt method [43] and normalized to β-actin.

Samples from the kidney were homogenized in ice-cold radioimmunoprecipitation assay (RIPA) buffer containing protease inhibitors, centrifuged, and protein content was determined in the supernatant using Bradford reagent. Forty micrograms of proteins were subjected to 10% SDS-PAGE followed by electrotransfer to a nitrocellulose membrane, which was blocked and probed with anti-Nrf2 and anti-β-actin. After overnight incubation at 4 °C and washing, the secondary antibodies were added, and the blots were developed. The obtained bands were scanned, and intensity was quantified using ImageJ (version 1.32 j, NIH, USA). The results were normalized to β-actin and presented as a percent of control. All antibodies were provided by Novus Biologicals (Centennial, CO, USA).

2.6. Assessment of the Impact of FN on MTX Cytotoxicity in HepG-2 Cells

The significance value of the obtained data was analyzed by one-way (ANOVA) followed by Tukey’s test using GraphPad Prism 7 (La Jolla, CA, USA). All results were presented as mean ± standard error of the mean (SEM). A p-value < 0.05 was considered significant.

To explore the mechanism underlying the antioxidant efficacy of FN, Nrf2 expression, HO-1 both expression and activity, along with mRNA expression of SOD and CAT, were assessed. MTX downregulated renal Nrf2 in both the mRNA and protein in rats; an effect that was significantly attenuated by FN (Figure 4A,B). These data highlighted the MTX-induced suppression of Nrf2 signaling. This notion was confirmed by the diminished HO-1 mRNA (Figure 4C) and activity (Figure 4D), and mRNA abundance of SOD (Figure 4E) and CAT (Figure 4F) in the kidney of rats following MTX injection. FN (10, 20, and 40 mg/kg) prevented the deleterious effect of MTX on HO-1, SOD, and CAT. Although FN had no effect on Nrf2, SOD, and CAT in normal rats, it increased renal HO-1, both gene expression and activity.

Owing to the role of MTX in inducing mitochondrial dysfunction, we investigated the effect of MTX and FN on ATP content in the kidney. MTX diminished renal ATP (p < 0.001) and FN treatment prior to MTX restored mitochondrial function (Figure 5). FN alone had no effect on renal ATP of normal rats.

Analysis of the mRNA expression in the kidney of rats which received MTX revealed significant upregulation of COX-2, iNOS, TNF-α, and IL-1β (Figure 6). The inflammatory response following MTX administration was evidenced by the increased circulating levels of TNF-α and IL-1β. FN significantly attenuated the expression and circulating levels of the assayed inflammatory mediators and its effect on TNF-α and IL-1β mRNA and serum TNF-α was dose-dependent (Figure 6). All determined proinflammatory markers showed no changes in rats received 40 mg/kg FN.

Oxidative damage, mitochondrial dysfunction, and inflammation can drive cell death. Given that MTX administration was associated with these processes, we determined its effect as well as the ameliorative potential of FN on apoptosis. MTX-mediated apoptosis was evidenced by the increased mRNA abundance of Bax (p < 0.001; Figure 7A) with a concomitant decline in Bcl-2 expression (Figure 7B) along with an increased Bax/Bcl-2 ratio (Figure 7C). Moreover, caspase-3 mRNA (Figure 7D) and activities of caspase-9 (Figure 7E) and caspase-3 (Figure 7F) were significantly increased following MTX injection. Remarkably, FN protected against MTX-induced apoptosis by diminishing Bax and caspases and enhancing Bcl-2 in rat kidney. FN had no effect on all apoptotic markers in normal animals (Figure 7).

3.7. FN Does Not Interfere with the Antitumor Activity of MTX

Our findings indicate that the natural isoflavone FN prevented AKI induced by MTX. FN suppressed excess ROS, oxidative injury, and improved mitochondrial function. Consequently, FN attenuated inflammation and inhibited cell death in the kidney of rats and hence, possesses a therapeutic benefit against MTX toxicity. Activation of Nrf2/HO-1 signaling and enhancement of the antioxidant defenses represent the main mechanism underlying the nephrotprotective effect of FN (Figure 9). These results provide new information on the protective effects of FN against MTX-induced AKI. In addition, the reported antineoplastic properties of FN in various malignancies are particularly encouraging from the therapeutic point of view. However, the exact mechanism underlying the renoprotective action of FN undoubtedly deserves further exploration in upcoming studies. 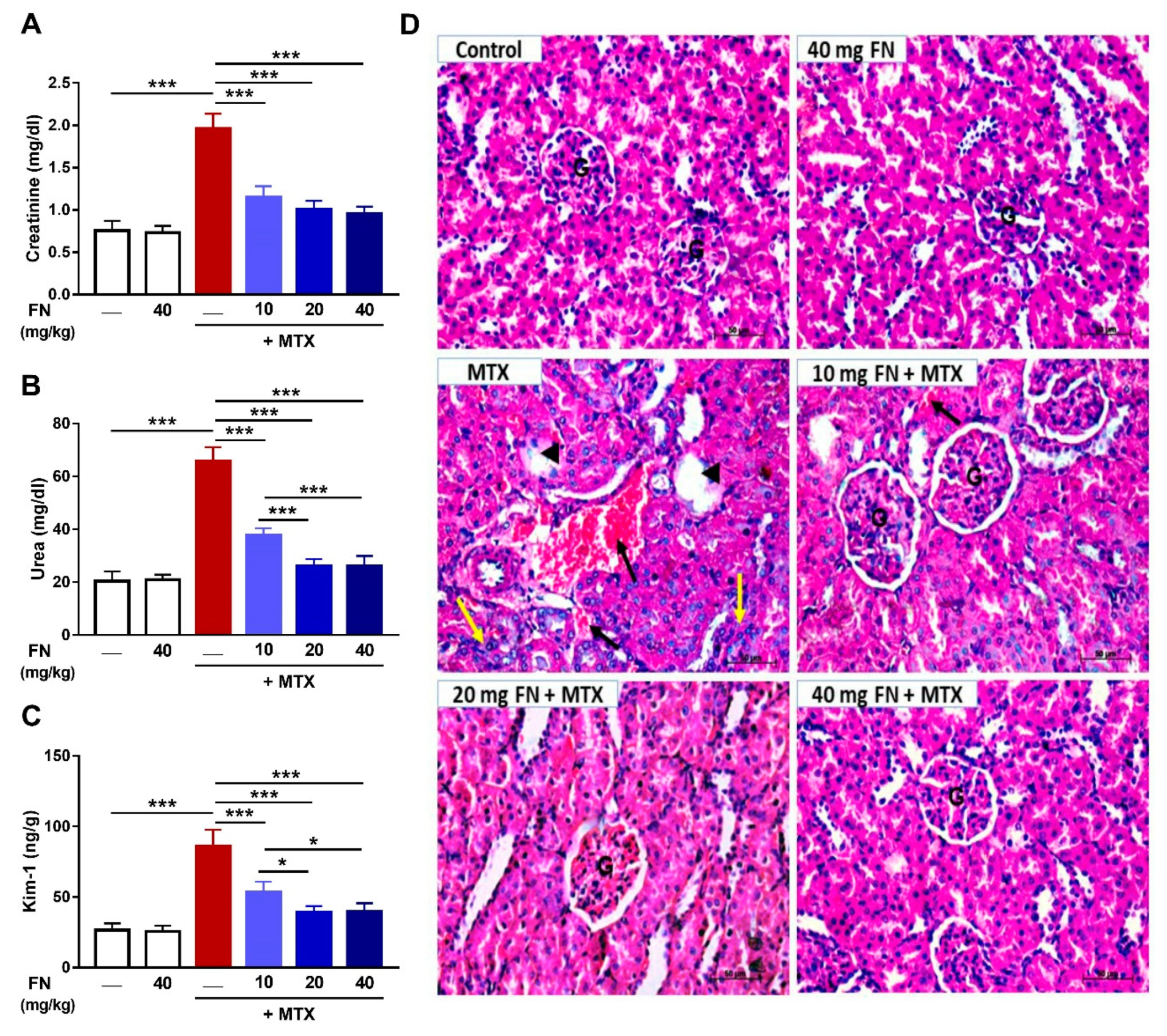 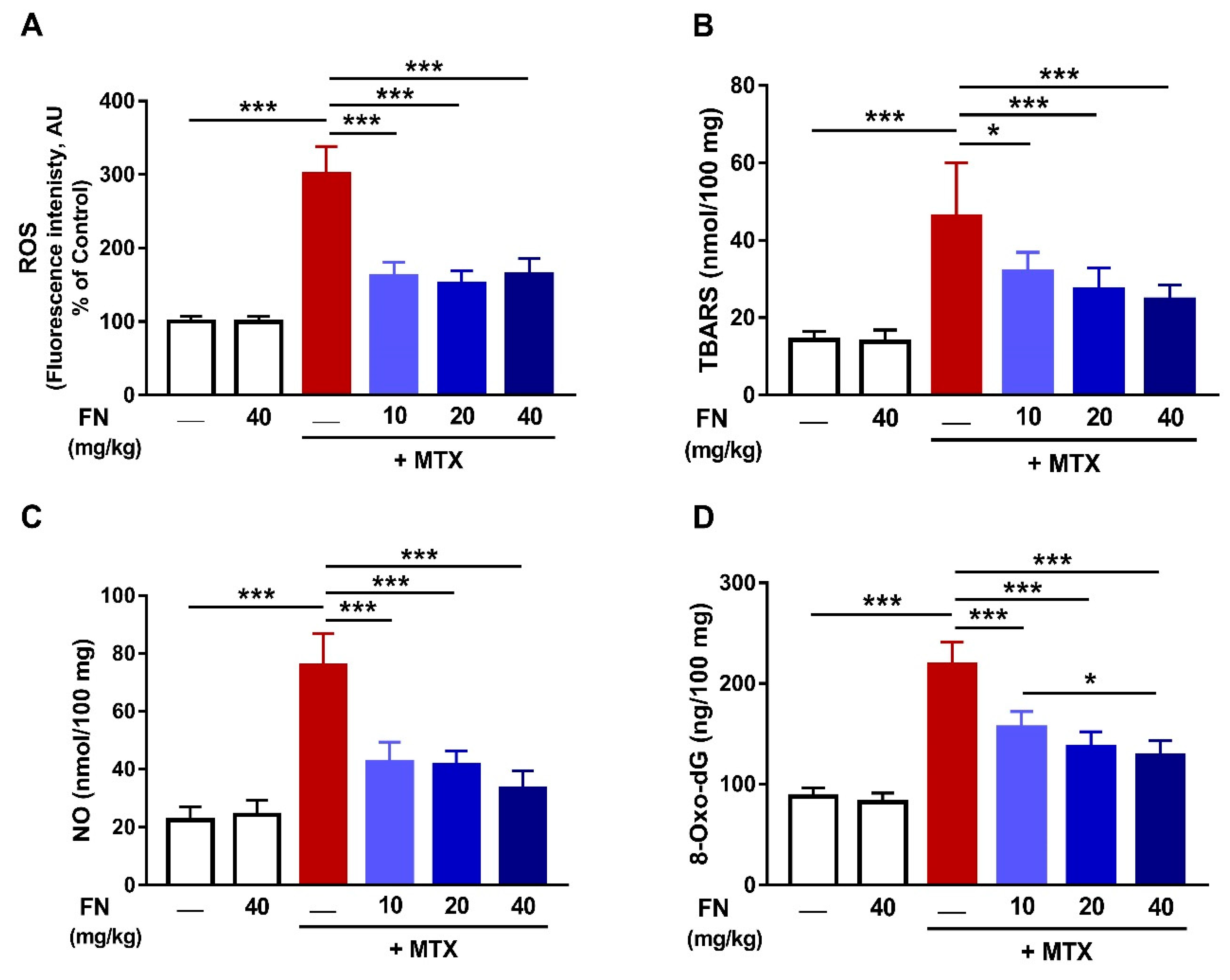 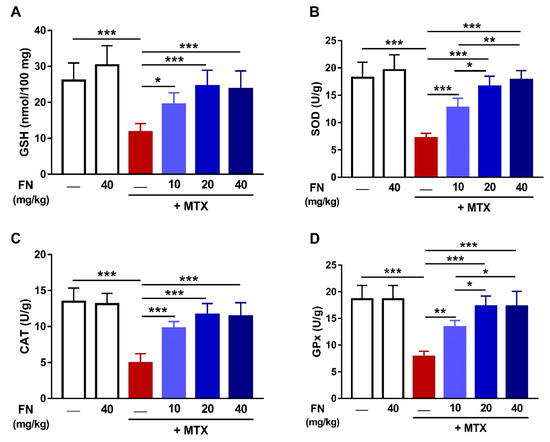 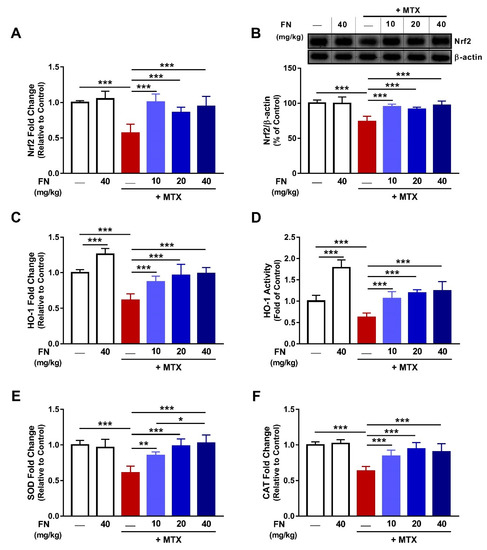 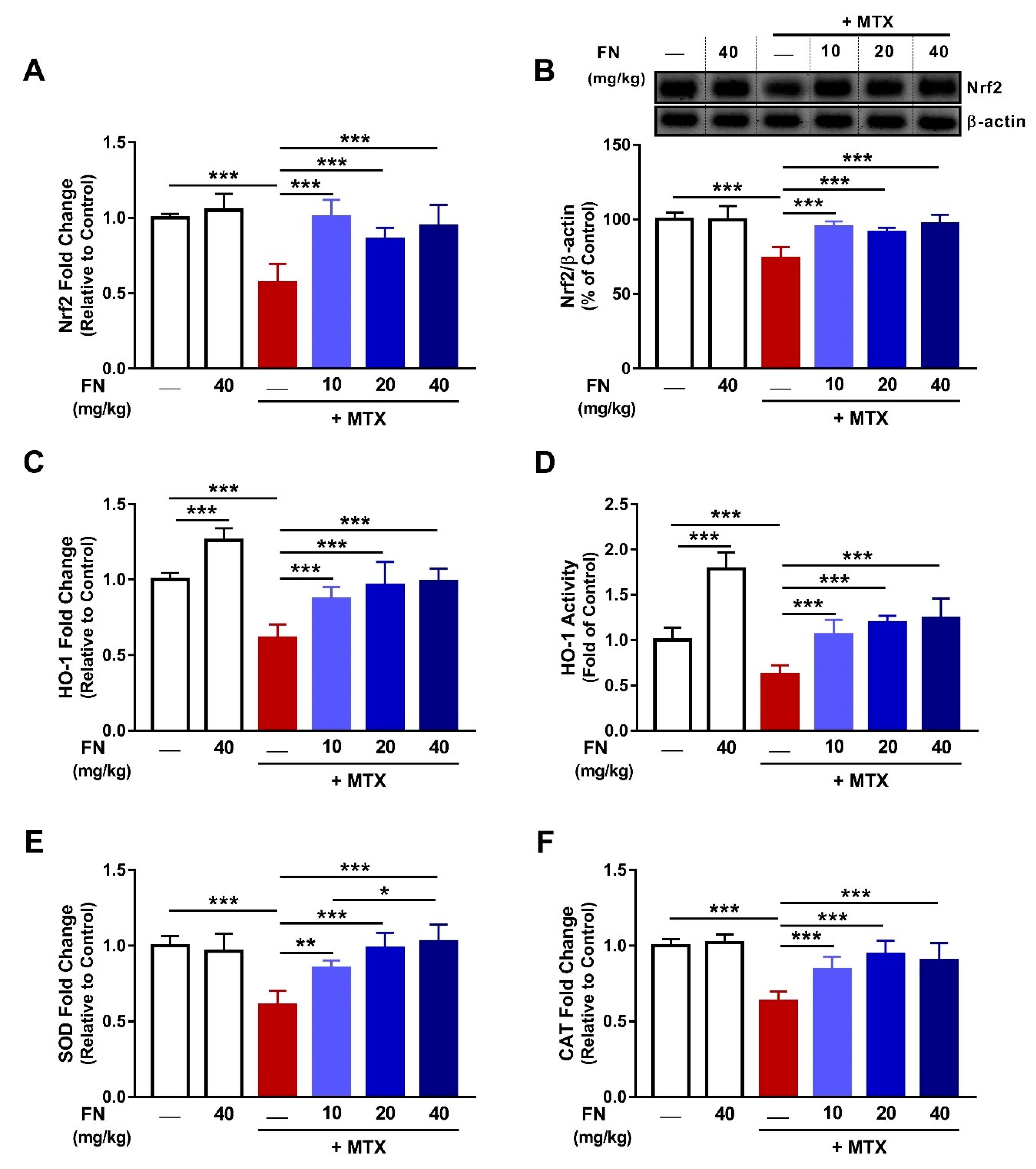 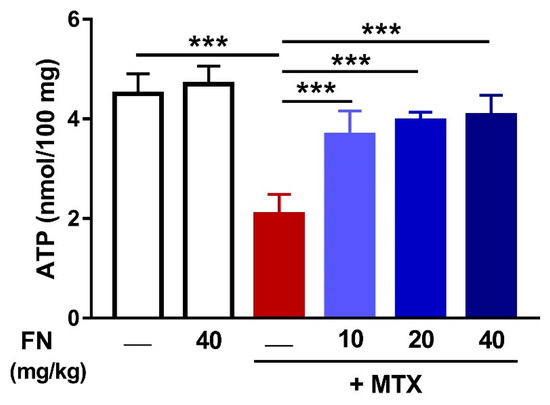 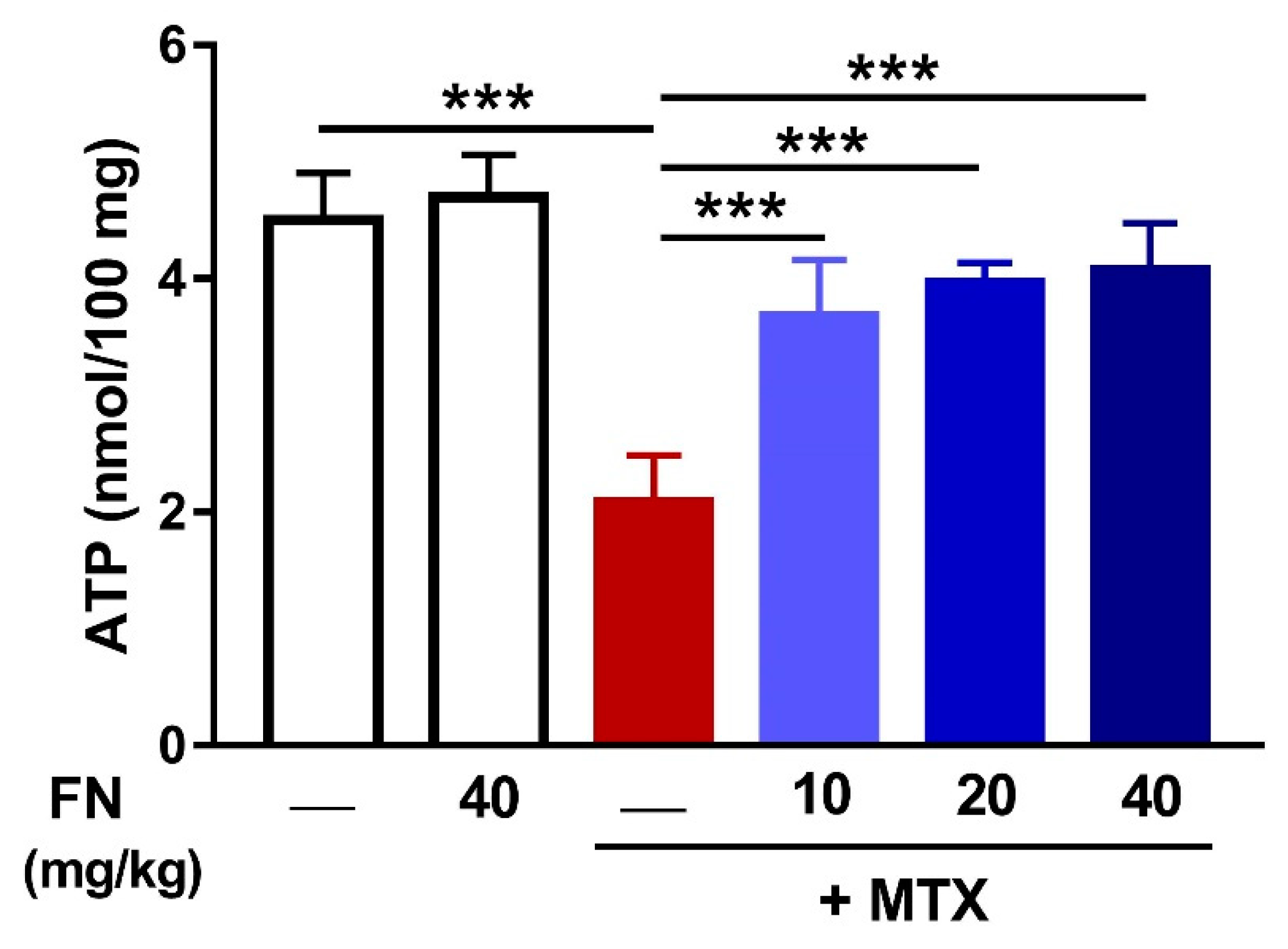 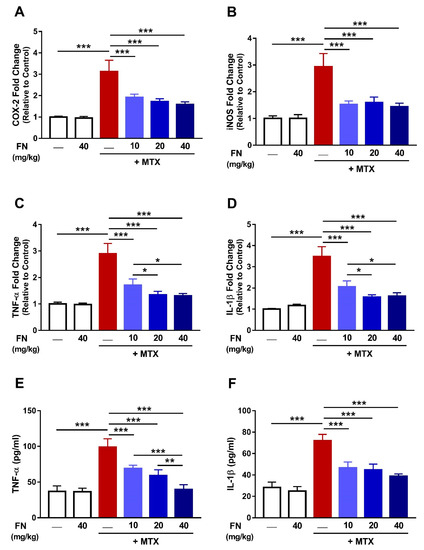 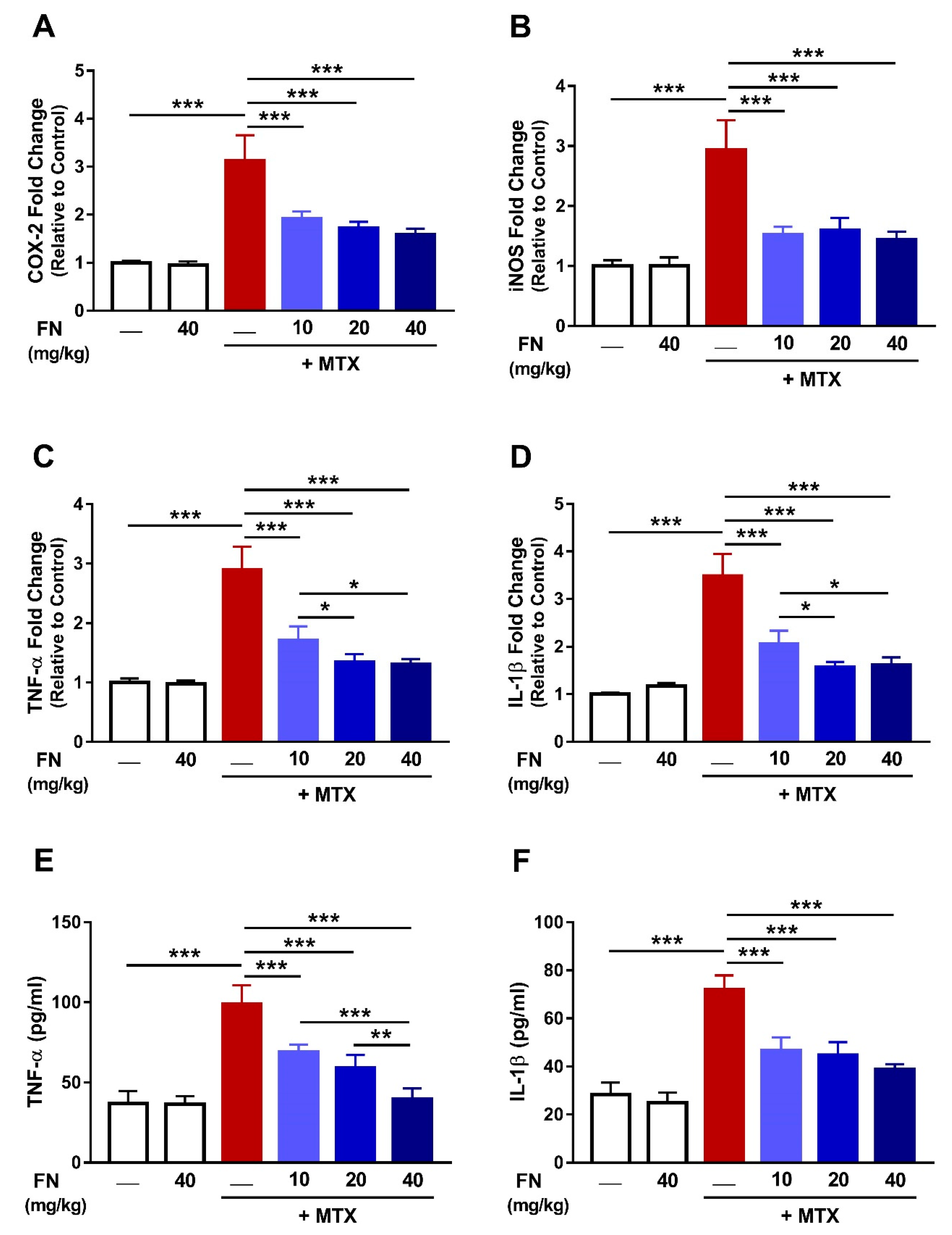 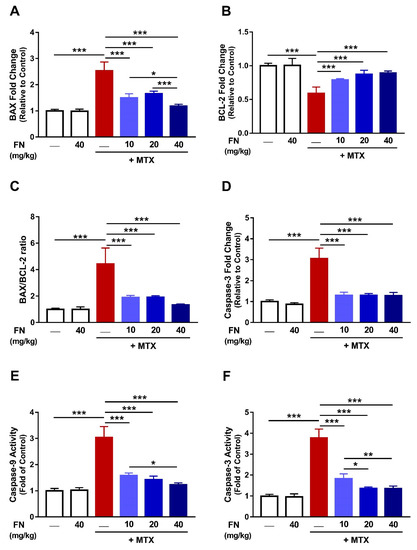 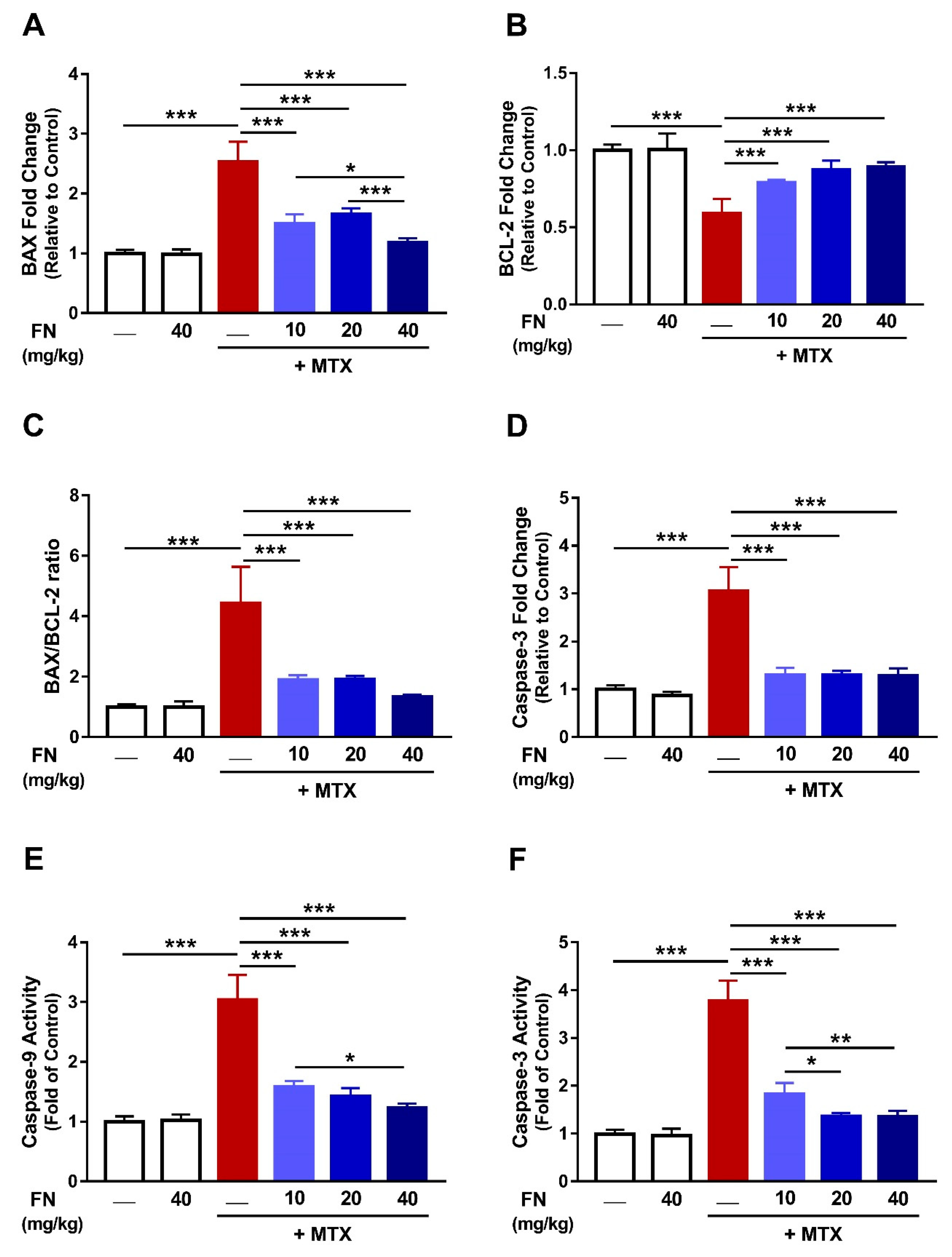 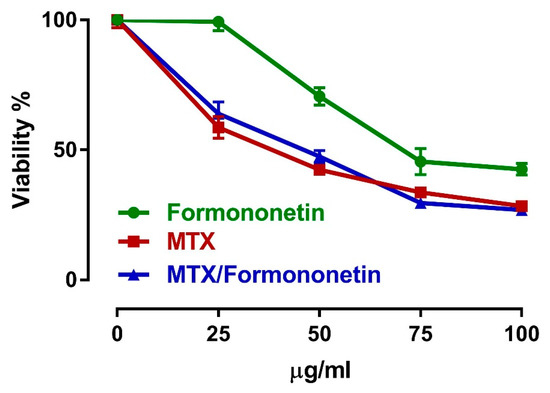 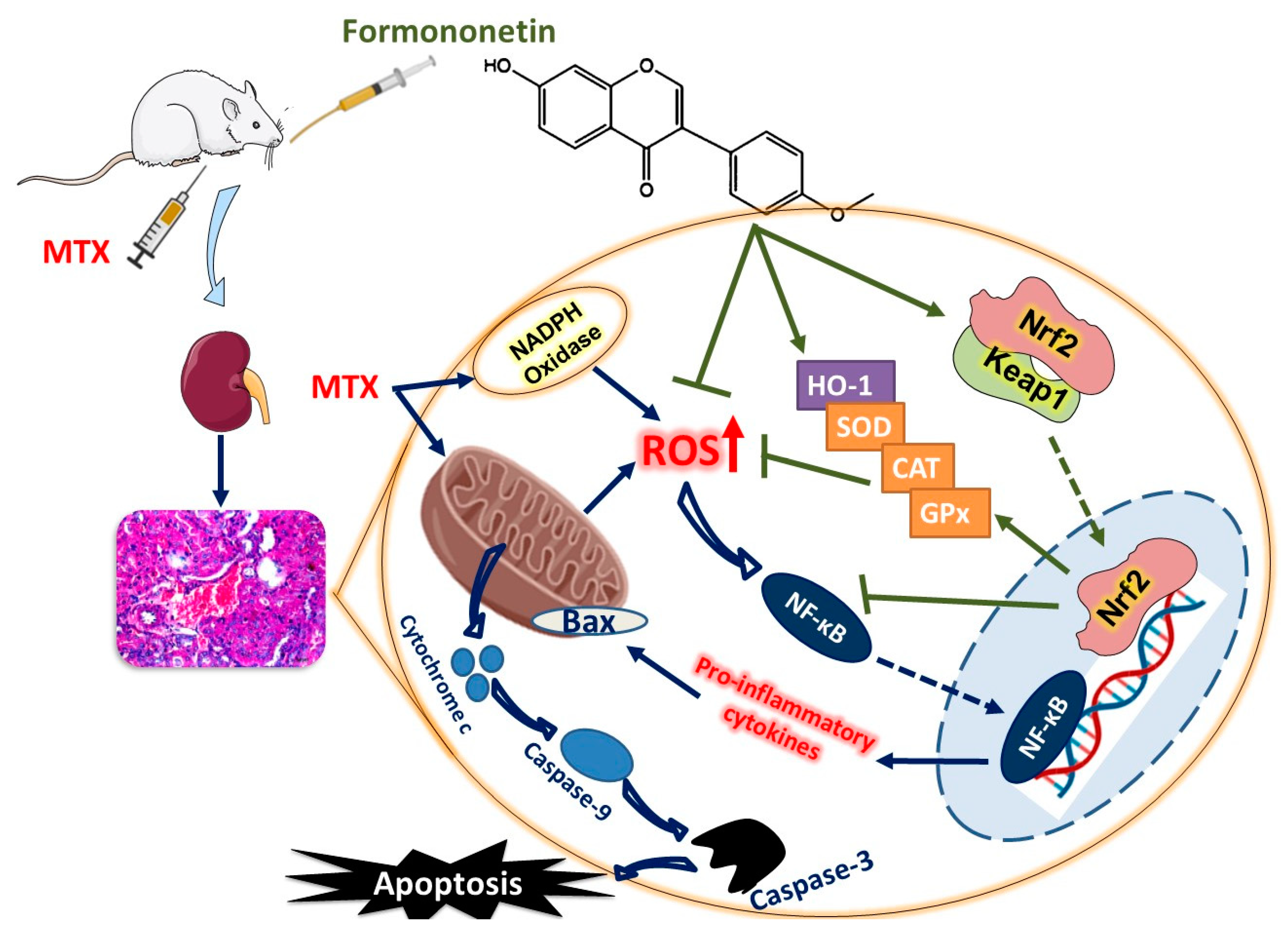 Table 1. Primers used for qRT-PCR.
Table 1. Primers used for qRT-PCR.
© 2019 by the authors. Licensee MDPI, Basel, Switzerland. This article is an open access article distributed under the terms and conditions of the Creative Commons Attribution (CC BY) license (http://creativecommons.org/licenses/by/4.0/).
We use cookies on our website to ensure you get the best experience. Read more about our cookies here.
Accept
We have just recently launched a new version of our website. Help us to further improve by taking part in this short 5 minute survey here. here.
Never show this again