:
Oxidative stress and inflammation triggered by increased oxidative stress are the cause of many chronic diseases. The lack of anti-inflammatory drugs without side-effects has stimulated the search for new active substances. Plant-derived compounds provide new potential anti-inflammatory and antioxidant molecules. Natural products are structurally optimized by evolution to serve particular biological functions, including the regulation of endogenous defense mechanisms and interaction with other organisms. This property explains their relevance for infectious diseases and cancer. Recently, among the various natural substances, polyphenols from extra virgin olive oil (EVOO), an important element of the Mediterranean diet, have aroused growing interest. Extensive studies have shown the potent therapeutic effects of these bioactive molecules against a series of chronic diseases, such as cardiovascular diseases, diabetes, neurodegenerative disorders and cancer. This review begins from the chemical structure, abundance and bioavailability of the main EVOO polyphenols to highlight the effects and the possible molecular mechanism(s) of action of these compounds against inflammation and oxidation, in vitro and in vivo. In addition, the mechanisms of inhibition of molecular signaling pathways activated by oxidative stress by EVOO polyphenols are discussed, together with their possible roles in inflammation-mediated chronic disorders, also taking into account meta-analysis of population studies and clinical trials.
Keywords:
EVOO polyphenols; oxidative stress; inflammation

2. Olive Polyphenols: A Group of Molecules with Shared Chemical and Biological Properties: Structure, Abundance and Bioavailability

3. Antioxidant and Anti-Inflammatory Properties of Olive Polyphenols in Animal Models

The overproduction of ROS correlates with lipid, protein or DNA damage involved in the onset of degenerative diseases; accordingly, cell defenses against a rise in ROS are fundamental [101]. Antioxidants inhibit oxidation; therefore, to react to oxidative stress, organisms maintain complex systems of antioxidants, primarily glutathione (GSH). Unfortunately, only a few drugs and biological molecules, such as vitamins, have been reported to act as antioxidants, yet with possible side effects [102,103].
Nowadays, researchers are focusing their attention on the antioxidant properties of natural compounds, without relevant side effects. In particular, the importance of the antioxidant activity of lipophilic and hydrophilic phenols in EVOO has emerged [104]. This fraction is physiologically produced by plants to react against the injuries produced by various pathogens or insects [28,105]. The antioxidant activity of the major phenolic components of EVOO, OLE and HT is related to their relative bioavailability with an appreciable level of absorption, fundamental to exert their metabolic and pharmacokinetic properties [49]. In molecular terms, OLE and HT, with their catecholic structure, behave as antioxidants in different ways: (i) by scavenging the peroxyl radicals and breaking peroxidative chain reactions, generating very stable resonance structures [106]; and (ii) by acting as metal chelators, therefore, preventing the copper sulphate-induced oxidation of low-density lipoproteins [107]. The activity of OLE and HT as metal chelators could be attributed to the ability of the hydroxyl groups to behave as electron donors and to the ensuing formation of intramolecular hydrogen bonds with free radicals [32]. However, the scavenging activity of OLE and HT was also assessed in non-metal oxidation systems. Indeed, data obtained in vitro highlight the ability of polyphenols to reduce the inactivation of catalase (CAT) by hypochlorous acid (HOCl); this effect protects against atherosclerosis following LDL oxidation by HOCl through apoB-100 chlorination [108]. Moreover, HT has been reported to improve the redox status of the cell by increasing the levels of GSH [109].
Recently, the oxidative damage in age-related diseases turned out to be primarily caused by reduced levels of the transcriptional Nuclear factor erythroid 2 (NF-E2)-related factor 2 (Nrf2) [110], and it was proposed as a therapeutic target for metabolic syndromes, including obesity, due to its behavior as a mediator of general adaptive responses of the cell, including proteostasis and inflammation [111,112]. However, the pivotal role of Nrf2 is involved in the regulation of protection against oxidation [113]. Following Nrf2 activation and consequently its translocation to the nucleus, Nrf2 binds to antioxidant response elements (ARE); after binding, it acts on the transcriptional expression of several antioxidant enzymes, including superoxide dismutase (SOD), c-glutamylcysteine synthetase (c-GCS), glutathione S-transferase (GST) and NADPH quinone oxidoreductase-1 (NQO1) [114].
EVOO polyphenols have been reported to interact with Nrf2 and with Nrf2-controlled enzymes. In vivo studies showed that EVOO polyphenols increased, at the mRNA level, the expression of Nrf2 and of its targets paraoxonase-2 (PON2), c-GCS, NQO1, and GST in the heart tissue of senescence-accelerated mouse-prone 8, whose diet included 10% olive oil [115]. These effects have been ascribed to HT. Indeed, a model of metabolic alterations, the high-fat diet (HFD)-fed male mice C57BL/6J, supplemented with HT (5.0 mg/kg), displayed a reduction in oxidative stress by restoring Nrf2 and the activity of the peroxisome proliferator-activated receptor-α (PPAR-α) to normal levels [116]. The same results were obtained when the same model was supplemented with the highest dose of HT (10–50 mg/kg/day), which also resulted in an increase in GST activity in the liver and in the muscle [117]. Finally, spontaneously hypertensive rats fed with OLE (60 mg/kg/day) showed increased levels of Nrf2-dependent phase II enzymes, such as NQO-1 [77]. Anyway, in spite of these and other data, the molecular mechanisms controlled by EVOO polyphenols in terms of antioxidant activity are not still clear; in fact, the reported effects were probably determined by the tissue localization of the enzyme and by the different concentrations of phenols used. Indeed, differently from previous data, in 60-day-old Wistar male rats fed with 7.5 mg/kg/day HT, oxidative stress was increased in heart tissue, probably due to the high concentration used [118]. The latter finding is not surprising; in fact, OLE and HT exert anti-proliferative and pro-apoptotic effects on tumor cells in vitro, inducing an accumulation of hydrogen peroxide mediated by the high doses [119,120].
The activity of EVOO polyphenols on Nrf2 signaling and on the levels of several antioxidant enzymes, such as γ-glutamyl-cysteinyl-ligase (γ-GCL) and SOD, was also reported in in vitro experiments with LPS-treated macrophages [121] and cancer cells [122]. Furthermore, it is widely reported that OLE and HT act on AMPK signaling, and the latter has been considered as an attractive therapeutic target for antioxidant activity. In fact, AMPK signaling plays a fundamental role in the cell defense system against ROS by direct phosphorylation of human FoxO1 (forkhead box O1) at Thr649, with the ensuing increase in FoxO1-dependent transcription of Mn-superoxide dismutase (MN-SOD) and CAT [123].
In conclusion, the data reported in the present and in the previous paragraph convincingly support the idea that EVOO polyphenols, in particular OLE and HT, exert antioxidant activity by interfering with different cellular pathways (Figure 2).

Several data highlight the ability of olive oil polyphenols to counteract aging and to protect against the insurgence of aging-associated pathologies, such as neurodegeneration, cardiovascular and metabolic diseases, and cancer, in part associated with derangement of redox homeostasis and proteostasis. However, recent research supports the idea that the health-promoting properties of olive oil polyphenols go well beyond their anti-amyloid and antioxidant power reported previously, highlighting their multi-target effects.
The claimed benefits of olive oil polyphenols have been supported by positive and encouraging results from many preclinical studies both in vitro and in animal models, as well as by population surveys and clinical trials often involving large numbers of participants. However, to date, there are still some doubts to resolve and therefore definitive results are lacking, even for the bioavailability of these molecules and their effective beneficial dose. In particular, further research is needed to better describe at the molecular and genetic levels the effects of olive polyphenols in several investigated biological systems to provide solid and definitive proof of their positive effects in a number of human pathologies. It must also be considered that the health benefits in humans most likely do not depend on the consumption of a single polyphenol but are the result of a variety of synergistic mechanisms of a combination of several polyphenols or other plant components.
Each factor affecting the bioavailability, bioaccessibility and bioactivity of polyphenols should also be considered. This is crucial because the bioavailability of these molecules is influenced by many factors, including phenolic structure, food processing, the food matrix, and the organism (microbiota composition, efficiency of detoxification mechanisms); furthermore, all these factors can interact with each other, modulating polyphenol bioavailability. Moreover, the latter, and thus the efficacy of these compounds, can be improved by administration in combination with other phytochemicals or drugs or in polyphenol-loaded nanotechnology-based delivery systems.
Finally, it might be more relevant and interesting to investigate the relationship between EVOO polyphenols and the gut microbiota to obtain further dietary indications. In fact, the dietary polyphenols/gut microbiota relation is a bi-directional one. On the one hand, polyphenols can affect the composition of gut microbiota; on the other hand, the microbiota is able to metabolize these molecules into bioactive compounds. Expanding knowledge on the effects of dietary polyphenols on the intestinal microbiota and the relative mechanisms of action and ensuing consequences, in addition to pharmacokinetics and pharmacodynamics of EVOO polyphenols, will be essential to better assess the effective doses and the levels reached by these molecules in different tissues and organs following different routes of introduction.

This research was funded by “MONICABUCCIANTINI RICATEN21—Functional food against neurodegenerative disorder.”

M.L. was supported by Fondazione Umberto Veronesi through University of Florence, Florence, Italy. 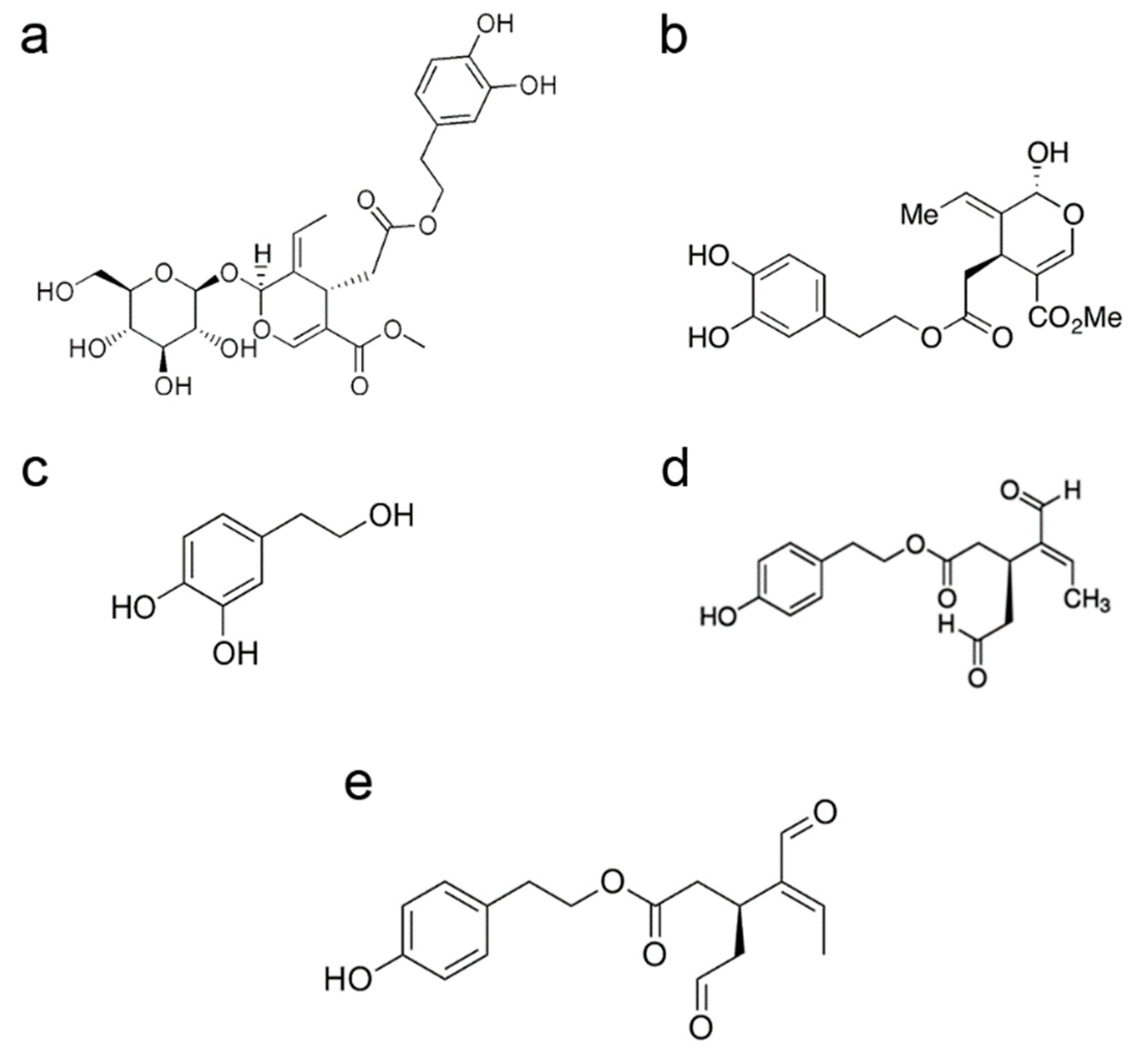