Life as a Vector of Dengue Virus: The Antioxidant Strategy of Mosquito Cells to Survive Viral Infection
Previous Article in Journal

Meta-Analysis of Oxidative Transcriptomes in Insects

Data accumulation in public databases has resulted in extensive use of meta-analysis, a statistical analysis that combines the results of multiple studies. Oxidative stress occurs when there is an imbalance between free radical activity and antioxidant activity, which can be studied in insects by transcriptome analysis. This study aimed to apply a meta-analysis approach to evaluate insect oxidative transcriptomes using publicly available data. We collected oxidative stress response-related RNA sequencing (RNA-seq) data for a wide variety of insect species, mainly from public gene expression databases, by manual curation. Only RNA-seq data of Drosophila melanogaster were found and were systematically analyzed using a newly developed RNA-seq analysis workflow for species without a reference genome sequence. The results were evaluated by two metric methods to construct a reference dataset for oxidative stress response studies. Many genes were found to be downregulated under oxidative stress and related to organ system process (GO:0003008) and adherens junction organization (GO:0034332) by gene enrichment analysis. A cross-species analysis was also performed. RNA-seq data of Caenorhabditis elegans were curated, since no RNA-seq data of insect species are currently available in public databases. This method, including the workflow developed, represents a powerful tool for deciphering conserved networks in oxidative stress response. View Full-Text
Keywords: insect; meta-analysis; oxidative stress; public database; RNA-seq; transcriptome insect; meta-analysis; oxidative stress; public database; RNA-seq; transcriptome
►▼ Show Figures 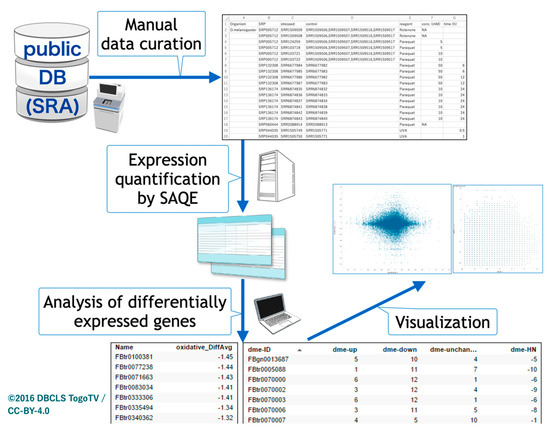