Oxidative Stress in the Pathogenesis of Crohn’s Disease and the Interconnection with Immunological Response, Microbiota, External Environmental Factors, and Epigenetics
Previous Article in Journal

Selenium is an essential micronutrient that has a huge impact on human health. It is a component of many enzymes and it plays a key role in the optimization of metabolic reactions and protection against oxidative damage [1,2,3]. In humans, there are 25 genes for selenoproteins, many of which act as enzymes. They are necessary for the proper functioning of the brain, thyroid gland, and immune system, as well as for the preservation of fertility [4,5].
One of the aspects of scientific research on the importance of selenium is research determining its impact on the cardiovascular system, including the development and course of arterial hypertension [6]. The correlation of low blood selenium concentrations with the high blood pressure values in Keshan disease has undoubtedly been proven. It has been documented that the symptoms of the disease, including cardiac arrhythmias, cardiomyopathy, and arterial hypertension, resolve after selenium supplementation [7,8]. Studies conducted so far give contradictory results, some of them have not shown a correlation between blood selenium concentrations and arterial hypertension, while others have shown that such a correlation exists [9]. There is no agreement on the direction of the potential correlation. In several studies, lower blood selenium concentrations in patients with arterial hypertension have been observed but there are also reports of the opposite correlation [10,11,12,13].
Arterial hypertension is one of the major risk factors for cardiovascular disease. Arterial hypertension can occur on its own, but most often it is accompanied by other abnormalities, such as dyslipidemia and glucose intolerance, which increase its impact on the risk of cardiovascular diseases [14]. Consideration of the cardiovascular consequences of hypertension enables a more precise assessment of the risk of cardiovascular events. The subclinical evaluation of organ complications in hypertension focuses on abnormal pulse pressure, left ventricular hypertrophy, renal dysfunction (elevated serum creatinine, elevated albumin/creatinine ratio, microalbuminuria, decreased estimated glomerular filtration rate), and adverse vascular changes such as increased carotid intima media thickness (cIMT), lowering of the ankle brachial index (ABI), decreased flow-mediated dilatation (FMD) [15,16].
According to the recommendations of scientific societies, increased cIMT, like the presence of atherosclerotic plaques in the carotid arteries, is a recognized organ complication of arterial hypertension. cIMT thickening is an early marker of atherosclerosis, which is observed before the formation of atherosclerotic plaque. The normative range of cIMT is estimated to be within 0.4–0.9 mm, with an increment of about 0.1 mm for each decade of life [17]. Moreover, cIMT assessed by ultrasound has a prognostic significance. cIMT increased by only 0.1 mm significantly increases the risk of myocardial infarction and stroke [18]. Measurement of cIMT enables the prediction of the occurrence of stroke and myocardial infarction in a manner independent of traditional risk factors and the discussed correlation between cIMT and cardiovascular risk is linear [19].
In connection with the above-mentioned importance of selenium in the body (also to maintain the redox balance of the system), the postulated role of selenium in the development of hypertension, the importance of cardiovascular consequences of arterial hypertension as predictors of cardiovascular risks, and the diagnostic usefulness of ultrasound assessment of the carotid intima media thickness, it seems justified to verify the correlation between serum selenium concentrations, the total antioxidant status, and the carotid intima media thickness in ultrasound assessment in patients with arterial hypertension without other clinically evident cardiovascular diseases.
The objective of the study was to establish the correlation between serum selenium concentrations, the total antioxidant status, and the carotid intima media thickness in ultrasound assessment in patients with arterial hypertension.

The studies were carried out as part of the research project entitled “Selenium and zinc deficiency as predictors of subclinical cardiovascular complications in hypertension” (Simple STM.A100.17.050), which was approved by the local ethics committee.
The studies were conducted between 2017–2019 in the hypertensiology clinic of the university hospital. The study group of patients was recruited from among those hospitalized in the clinic to evaluate the effectiveness and possible optimization of the treatment of arterial hypertension and to assess the cardiovascular consequences of the underlying disease. The inclusion criteria for the study were: age over 18 years, diagnosed and pharmacologically treated arterial hypertension, and no modification of the therapy of arterial hypertension in the last 12 months. Based on the adopted inclusion criteria, 141 patients were qualified to participate in the study. The size of the originally recruited group of respondents was reduced by excluding persons meeting the adopted exclusion criteria. Exclusion criteria were type 2 diabetes, ischemic heart disease, stroke, peripheral arterial disease, renal failure, and hyperthyroidism or hypothyroidism. Based on the accepted exclusion criteria, a total of 65 patients were excluded from the study: 44 people due to type 2 diabetes, 22—ischemic heart disease, 19—stroke, 15—peripheral arterial disease, 2—renal failure, and 2—hyperthyroidism or hypothyroidism. Most of the patients excluded from the study had more than one exclusion criterion. Ultimately, the study group consisted of 76 people. The clinical characteristics of the study group of patients are presented in Table 1.
The project methodology included a questionnaire, laboratory analysis, and an ultrasound exam of the carotid arteries.
The questionnaire included questions about the patient’s health (especially treatment and management of arterial hypertension), the presence of comorbidities, and the basic risk factors for cardiovascular diseases. The performed laboratory analyses included the determination of the basic parameters of lipid and carbohydrate metabolism in the blood, determination of serum selenium concentrations (Se-S), and determination of serum antioxidant status (TAS).
Total cholesterol, LDL and HDL, triglycerides, and blood glucose were determined using commercially available standard tests.
Serum selenium concentrations were determined using hydride generation atomic absorption spectroscopy (HGAAS). The antioxidant status (TAS) was assessed using the enzyme-linked immunosorbent assay (ELISA) according to the manufacturer’s instructions (Cayman Chemical, catalog no. 709001). The Se-S and TAS determination methodology used was analogous to that described previously, for example, by Gać et al. (2020) [20].
Carotid ultrasound exams were performed using the ALOKA ProSound 6 device (Aloka Inc., Tokyo, Japan). The exams were performed for the presence of (significant/ insignificant) carotid stenosis and/or occlusion. In addition, the intima media thickness (cIMT) was assessed. The exams were performed in the supine position with the patient’s head tilted about 30–45° from the examined artery. A linear probe with a frequency of 7–10 MHz was used for the measurements. The exams were begun with B-mode imaging, identifying the common carotid artery (CCA) in the transverse plane. In the longitudinal plane, the vessel was visualized using the optimal depth and setting the focus (single) to the depth of the artery being assessed. The IMT measurements were taken 1–2 cm below the division for the internal carotid (ICA) and external carotid (ECA) artery, on the posterior wall, in an area without plaque, with a clearly identified double line pattern. When atherosclerotic plaque was observed (thickness over 1.5 mm), its morphology was assessed with B-mode imaging, and in the next stage, the surface of each plaque was assessed—the blood flow spectrum was analyzed at the level of atherosclerotic plaques using the spectral recording option. In color imaging, the presence of acceleration typical of significant vasoconstriction was either excluded or confirmed. The carotid arteries on the opposite side were examined in an analogous manner. The mean value of the measurements for the right and left sides was taken as the final intima media thickness.
For comparative analysis, the study group of patients was divided using serum selenium concentrations and serum antioxidant status as median cut-off points. Based on the Se-S median of 88.48 μg/L, the subgroups of low-Se (Se-S < median) and high-Se (Se-S ≥ median) patients were distinguished. Based on the TAS median of 1.18 mM, the subgroups of low-TAS (TAS < median) and high-TAS (TAS ≥ median) patients were distinguished. For a similar purpose, the group of respondents was divided according to the cIMT median of 0.70 mm. On this basis, the low-cIMT (cIMT < median) and high-cIMT (cIMT ≥ median) patient subgroups were distinguished. Each group consisted of 38 patients.
The obtained results were statistically analyzed with the use of the “Dell Statistica 13” statistical package (Dell Inc., Tulsa, OK, USA). Results for quantitative variables were expressed as mean values ± standard deviations. The distribution of quantitative variables was checked using the Shapiro–Wilk test. For independent quantitative variables with a normal distribution, the t-test was used to test the significance of the hypotheses. In the case of variables with a distribution other than normal, the Mann–Whitney U-test was used for independent quantitative variables. Results for qualitative variables were expressed as percentages. The chi-square test was used to test the significance of the hypotheses for independent qualitative variables. To determine the correlations between the studied variables, correlation, and regression analysis was performed. The parameters of the model obtained in the regression analysis were estimated using the least squares method. The level of statistical significance was set at p < 0.05.

In patients with arterial hypertension, the lower total antioxidant status conditioned by lower serum selenium concentrations may be correlated with an increase in the carotid intima media thickness assessed by ultrasound.

The study was conducted according to the guidelines of the Declaration of Helsinki, and approved by the Ethics Committee of Wroclaw Medical University (protocol code KB-598/2017, date of approval: 21 September 2017).

The data presented in this study are available upon request from the corresponding author. The data are not publicly available. 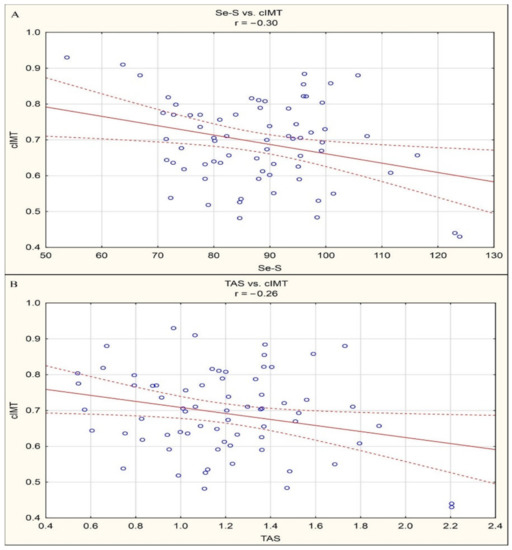 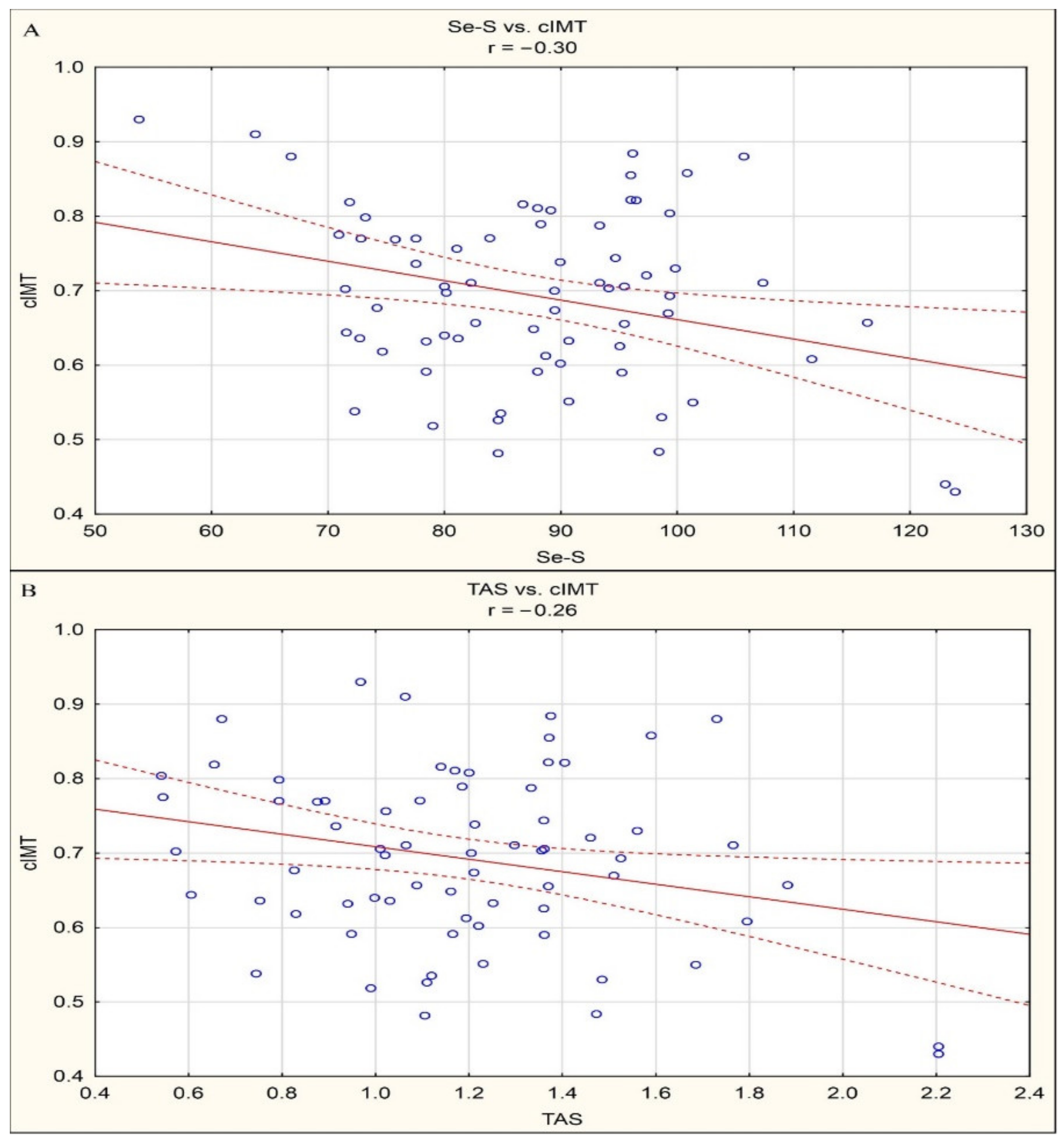