Adolescence is a developmental phase characterized by emotional turmoil and coincides with the emergence of affective disorders. Inherited serotonin transporter (5-HTT) downregulation in humans increases sensitivity to these disorders. To reveal whether and how 5-HTT gene variance affects fear-driven behavior in adolescence, we tested wildtype and serotonin transporter knockout (5-HTT−/−) rats of preadolescent, adolescent, and adult age for cued fear extinction and extinction recall. To analyze neural circuit function, we quantified inhibitory synaptic contacts and, through RT-PCR, the expression of c-Fos, brain-derived neurotrophic factor (BDNF), and NDMA receptor subunits, in the medial prefrontal cortex (mPFC) and amygdala. Remarkably, the impaired recall of conditioned fear that characterizes preadolescent and adult 5-HTT−/− rats was transiently normalized during adolescence. This did not relate to altered inhibitory neurotransmission, since mPFC inhibitory immunoreactivity was reduced in 5-HTT−/− rats across all ages and unaffected in the amygdala. Rather, since mPFC (but not amygdala) c-Fos expression and NMDA receptor subunit 1 expression were reduced in 5-HTT−/− rats during adolescence, and since PFC c-Fos correlated negatively with fear extinction recall, the temporary normalization of fear extinction during adolescence could relate to altered plasticity in the developing mPFC. View Full-Text
Keywords: serotonin transporter; rat; fear extinction; medial prefrontal cortex; NMDA; BDNF; adolescence; age serotonin transporter; rat; fear extinction; medial prefrontal cortex; NMDA; BDNF; adolescence; age
►▼ Show Figures 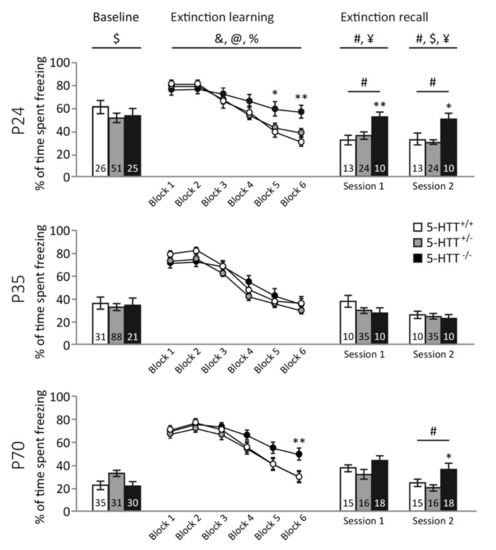