One of the most commonly known chronic neurodegenerative disorders, Alzheimer’s disease (AD), manifests the common type of dementia in 60–80% of cases. From a clinical standpoint, a patent cognitive decline and a severe change in personality, as caused by a loss of neurons, is usually evident in AD with about 50 million people affected in 2016. The disease progression in patients is distinguished by a gradual plummet in cognitive functions, eliciting symptoms such as memory loss, and eventually requiring full-time medical care. From a histopathological standpoint, the defining characteristics are intracellular aggregations of hyper-phosphorylated tau protein, known as neurofibrillary tangles (NFT), and depositions of amyloid β-peptides (Aβ) in the brain. The abnormal phosphorylation of tau protein is attributed to a wide gamut of neurological disorders known as tauopathies. In addition to the hyperphosphorylated tau lesions, neuroinflammatory processes could occur in a sustained manner through astro-glial activation, resulting in the disease progression. Recent findings have suggested a strong interplay between the mechanism of Tau phosphorylation, disruption of microtubules, and synaptic loss and pathology of AD. The mechanisms underlying these interactions along with their respective consequences in Tau pathology are still ill-defined. Thus, in this review: (1) we highlight the interplays existing between Tau pathology and AD; and (2) take a closer look into its role while identifying some promising therapeutic advances including state of the art imaging techniques. View Full-Text
Keywords: protein tau; Alzheimer’s disease; neurodegenerative disease; synaptic dysfunction; Aβ-peptides; tau-imaging protein tau; Alzheimer’s disease; neurodegenerative disease; synaptic dysfunction; Aβ-peptides; tau-imaging
►▼ Show Figures 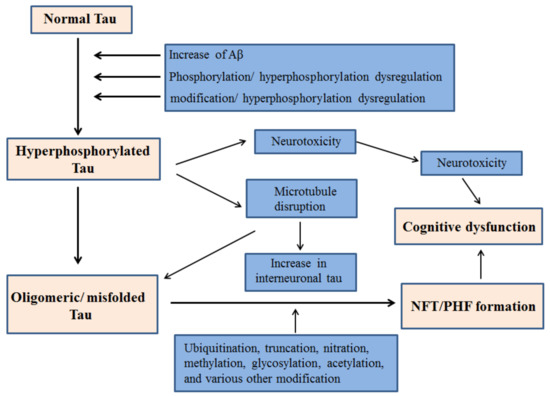 Islam Khan, R.; Nirzhor, S.S.R.; Rashid, B. A Closer Look into the Role of Protein Tau in the Identification of Promising Therapeutic Targets for Alzheimer’s Disease. Brain Sci. 2018, 8, 162.


Islam Khan R, Nirzhor SSR, Rashid B. A Closer Look into the Role of Protein Tau in the Identification of Promising Therapeutic Targets for Alzheimer’s Disease. Brain Sciences. 2018; 8(9):162.


Islam Khan, Rubayat; Nirzhor, Saif S.R.; Rashid, Barnaly. 2018. "A Closer Look into the Role of Protein Tau in the Identification of Promising Therapeutic Targets for Alzheimer’s Disease." Brain Sci. 8, no. 9: 162.