Effect of Chronic Administration of Nickel on Affective and Cognitive Behavior in Male and Female Rats: Possible Implication of Oxidative Stress Pathway

Nickel (Ni) toxicity has been reported to produce biochemical and behavioral dysfunction. The present study was undertaken to examine whether Ni chronic administration can induce alterations of affective and cognitive behavior and oxidative stress in male and female rats. Twenty-four rats, for each gender, divided into control and three test groups (n = 6), were injected intraperitoneally with saline (0.9% NaCl) or NiCl2 (0.25 mg/kg, 0.5 mg/kg and 1 mg/kg) for 8 weeks. After treatment period, animals were tested in the open-field, elevated plus maze tests for anxiety-like behavior, and forced swimming test for depression-like behavior. The Morris Water Maze was used to evaluate the spatial learning and memory. The hippocampus of each animal was taken for biochemical examination. The results showed that Ni administration dose dependently increased anxiety-like behavior in both tests. A significant increase in depression-like symptoms was also exhibited by Ni treated rats. In the Morris Water Maze test, the spatial learning and memory were significantly impaired just in males treated with 1 mg/kg of Ni. With regard to biochemical analysis, activity of catalase (CAT) and superoxide dismutase (SOD) were significantly decreased, while the levels of nitric oxide (NO) and lipid peroxidation (LPO) in the hippocampus were significantly increased in the Ni-treated groups. Consequently, chronic Ni administration induced behavioral and biochemical dysfunctions. View Full-Text
Keywords: nickel; depression-like; anxiety-like; memory; oxidative stress nickel; depression-like; anxiety-like; memory; oxidative stress
►▼ Show Figures 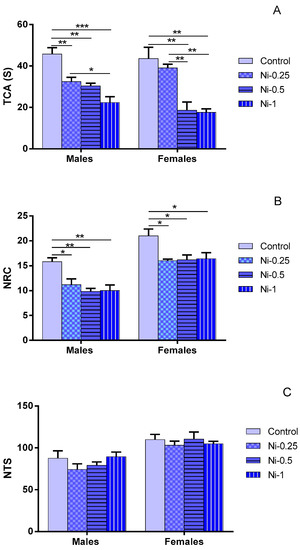