On the Developmental Timing of Stress: Delineating Sex-Specific Effects of Stress across Development on Adult Behavior

Education and Income Predict Future Emotional Well-Being of Whites but Not Blacks: A Ten-Year Cohort

Background: The Minorities’ Diminished Return (MDR) theory is defined as systematically smaller effects of socioeconomic status (SES) on the health and well-being of minority groups when compared to Whites. To extend the existing literature on the MDR theory as applied to the change of mental well-being over time, we investigated Black-White differences in the effects of baseline education and income on subsequent changes in positive and negative affect over a ten-year period. Methods: The Midlife in the United States (MIDUS) is a 10-year longitudinal study of American adults. This analysis followed 3731 adults who were either Whites (n = 3596) or Blacks (n = 135) for 10 years. Education and income, as measured at baseline and 10 years later, were the independent variables. Negative and positive affect, measured at baseline and over ten years of follow up, were the dependent variables. Covariates were age, gender, and physical health (body mass index, self-rated health, and chronic medical conditions), measured at baseline. Race was the focal moderator. We ran multi-group structural equation modeling in the overall sample, with race defining the groups. Results: High education at baseline was associated with an increase in income over the 10-year follow up period for Whites but not Blacks. An increase in income during the follow up period was associated with an increase in the positive affect over time for Whites but not Blacks. Conclusion: The MDR theory is also relevant to the effects of baseline education attainment on subsequent changes in income and then in turn on positive affect over time. The relative disadvantage of Blacks in comparison to Whites in receiving mental health gains from SES may reflect structural racism and discrimination in the United States. There is a need for additional research on specific societal barriers that minimize Blacks’ mental health gains from their SES resources, such as education and income. There is also a need for policies and programs that help Blacks to leverage their SES resources. View Full-Text
Keywords: race; social class; socioeconomic status; positive affect; negative affect race; social class; socioeconomic status; positive affect; negative affect
►▼ Show Figures 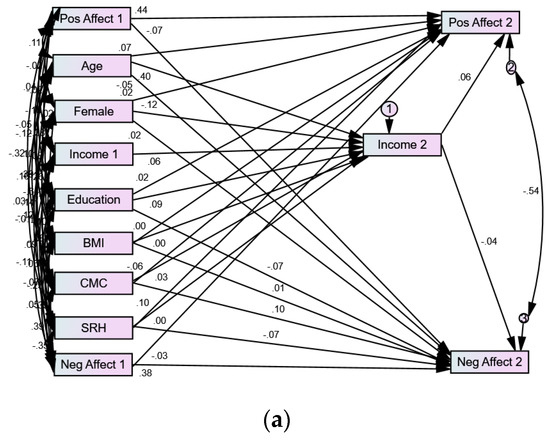