Early Detection and Intervention of ASD: A European Overview
Next Article in Special Issue

Excessive alcohol consumption leads to neurodegeneration, which contributes to cognitive decline that is associated with alcohol use disorders (AUDs). The endocannabinoid system has been implicated in the development of AUDs, but little is known about how the neurotoxic effects of alcohol impact the endocannabinoid system. Therefore, the current study investigated the effects of neurotoxic, binge-like alcohol exposure on components of the endocannabinoid system and related N-acylethanolamines (NAEs), and then evaluated the efficacy of fatty acid amide hydrolase (FAAH) inhibition on attenuating alcohol-induced neurodegeneration. Male rats were administered alcohol according to a binge model, which resulted in a transient decrease in [3H]-CP-55,940 binding in the entorhinal cortex and hippocampus following two days, but not four days, of treatment. Furthermore, binge alcohol treatment did not change the tissue content of the three NAEs quantified, including the endocannabinoid and anandamide. In a separate study, the FAAH inhibitor, URB597 was administered to rats during alcohol treatment and neuroprotection was assessed by FluoroJade B (FJB) staining. The administration of URB597 during binge treatment did not significantly reduce FJB+ cells in the entorhinal cortex or hippocampus, however, a follow up “target engagement” study found that NAE augmentation by URB597 was impaired in alcohol intoxicated rats. Thus, potential alcohol induced alterations in URB597 pharmacodynamics may have contributed to the lack of neuroprotection by FAAH inhibition. View Full-Text
Keywords: alcohol; alcoholism; CB1; ethanol; endocannabinoid; N-acylethanolamine; FAAH; neurodegeneration alcohol; alcoholism; CB1; ethanol; endocannabinoid; N-acylethanolamine; FAAH; neurodegeneration
►▼ Show Figures 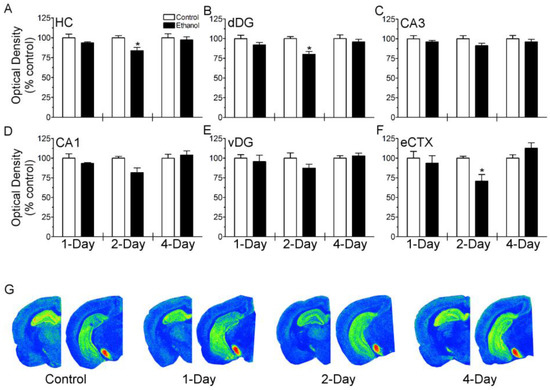