Improvement of Advanced Parkinson’s Disease Manifestations with Deep Brain Stimulation of the Subthalamic Nucleus: A Single Institution Experience
Next Article in Special Issue

The Penn State Child Cohort (PSCC) is a general population sample of 700 children between ages 5–12 years, of whom 421 were followed up 8.4 years later as adolescents (mean age 17.0 ± 2.2 years, 53.9% male, and 21.9% ethnic minority). The loss to follow-up was mainly due to participants moving away from central Pennsylvania; no major differences in the baseline demographic characteristics, however, were observed between those who did and did not participate in the follow-up study [26]. The study protocol was approved by the Penn State University College of Medicine Institutional Review Board. Written informed consents were obtained from participants, as well as their parents or legal guardians if younger than 18 years.

During their laboratory visit, all subjects underwent a series of subjective and objective measurements including parent-reported (subjects’ age <18 years) and self-reported (subjects’ age ≥18 years) questionnaires and rating scales (e.g., behavior, sleep and pubertal development), and measurement of height and weight. Body mass index (BMI) was calculated (in kg/m2) and converted to a percentile according to a formula based on the Centers for Disease Control’s sex-specific BMI-for-age growth charts [27]. Participants identified their race/ethnicity from one of six options, as part of the clinical history, and was treated as a dummy variable with white as the reference group vs. ethnic-minority, including Black, Native-American, Asian, Multiple races and Hispanic ethnicity. Parents provided data on their occupation and socioeconomic status (SES) was defined as one or both parents having a professional or managerial occupation vs. both parents having a non-professional or non-managerial occupation, including being unemployed (i.e., low SES).
All participants underwent a single-night, 9-h polysomnography (PSG) recording in a sound-attenuated, light- and temperature-controlled room with a comfortable, bedroom-like atmosphere. Each subject was continuously monitored from 22:00 h until 07:00 h using 14-channel recordings of electroencephalogram (EEG), electrooculogram (EOG), and electromyogram (EMG). Respiration was monitored via nasal pressure (Pro-Tech PTAF Lite; Mukilteo, WA, USA), thermocouple (Salter Labs; Lake Forest, IL, USA), and thoracic/abdominal strain gauges (Model 1312, Sleepmate Technologies; Midlothian, VA, USA). Hemoglobin oxygen saturation (SpO2) was assessed using a pulse oximeter placed on the index finger (Model 3011 Xpod, Nonin Medical, Inc.; Plymouth, MN, USA). Snoring sounds were monitored via a sensor attached to the throat. All data were recorded using Twin Recording & Analysis software (Grass-Telefactor; West Warwick, RI, USA). Visual sleep stage scoring was conducted by a registered PSG technologist according to standardized criteria [28]. Apnea/hypopnea index (AHI), the number of apneas and hypopneas per hour of sleep, and periodic limb movement index (PLMI), the number of periodic limb movements per hour of sleep, were ascertained [26,29]. Sleep parameters derived from PSG included sleep continuity variables such as sleep onset latency (SOL), wake after sleep onset (WASO), total sleep time (TST), and sleep efficiency (SE) as well as sleep architecture parameters defined as the amount of time spent in each sleep stage (i.e., stage 1, stage 2, slow wave sleep [SWS] and rapid eye movement sleep [REM]) divided by total sleep time.
From the PSG-measured TST, we split the overall sample into 3 ordinal groups based on the cohort quartiles: ≥8 h (i.e., 75th percentile), 7–8 h (i.e., median of the sample), and ≤7 h (i.e., 25th percentile). Based on this distribution, which is similar to that reported for this age range in previous studies [30] and consistent with current recommendations for “optimal” sleep as ≥8 h in this age group [31], we defined suboptimal objective sleep duration as PSG-measured TST between 7 and 8 h and objective “short” sleep duration as PSG-measured TST ≤7 h. We should note that these three ordinal groups were mutually exclusive; in other words, all adolescents in the 7–8 h group slept between 7 and 8 h (i.e., >7 h and <8 h).

2.3. Insomnia Symptoms and Other Self-Reports

Insomnia symptoms were considered present if participants answered yes to either or both of the following questions: “do you have difficulty falling asleep?” (DFA) or “do you have difficulty staying asleep?” (DSA) from a self-reported version of the Pediatric Sleep Questionnaire [32]. Pubertal development (Tanner staging) was determined via a self-administered rating scale [33]. Circadian preference was measured using the Morningness-Eveningness Questionnaire (MEQ), which has been validated in both adults and adolescents [34].

The parents of all participants completed the Pediatric Behavior Scale (PBS) [37]—a 165-item rating scale that assesses behaviors over the past 2 months, including Aggression (e.g., “mean or cruel to others”, “threatens, bullies”, “starts fights”, “lies, cheats or steals”), Inappropriate Social Behavior (e.g., “immature”, “pesters or nags”, “loud”, “poor social judgment”), Perseverative Thinking (e.g., “hard to get an idea out of his/her mind”, “talks about the same things over and over”, “upset by changes in routine”), Social Isolation (e.g., “doesn’t get along with other children”, “hard time making friends”, “withdrawn, spends a lot of time alone”, “doesn’t take part in normal social activities”), and Thought Disorder (e.g., “sees or hears things that aren’t really there”, “says strange things that don’t make sense”, “strange, unusual or bizarre behavior”, “very suspicious of others”). For each subscale, a total raw score was obtained following standard procedures. The PBS has been used in several studies in children from the general population and with a wide range of behavioral disorders [9,12,13,21,38] and it served in the present study as an external validator of specific behavioral problems included in the Thought Problems and Aggressive Behaviors subscales of the C/ABCL.

3.1. Demographic and Clinical Characteristics of the Sample

In summary, adolescents with insomnia symptoms have clinically elevated externalizing and internalizing behavioral problems. Importantly, adolescents with insomnia symptoms and objective normal sleep duration have more externalizing behaviors such as rule-breaking and aggressive behaviors, while adolescents with insomnia symptoms and objective short sleep duration have clinically elevated internalizing problems, particularly withdrawn depression and rumination. These differential behavioral profiles, together with accumulating physiologic data, suggest that phenotyping of insomnia could be introduced as early as adolescence and childhood. An improved insomnia nosology based on objective sleep measures may provide clinicians with the ability to differentiate phenotypes and their associated behaviors without relying first-hand on expensive, time-consuming sleep studies. This phenotyping will better guide clinical evaluation and application of specific insomnia interventions such as cognitive behavioral treatment (CBT-I) or hypnotic medication.

The authors thank the sleep technicians and staff of the Sleep Research & Treatment Center and the Clinical Research Center of the Clinical Translational Science Institute at the Pennsylvania State University College of Medicine for their support with this project. National Institutes of Health grants R01 HL63772, R01 HL97165, UL1 RR033184, and C06 RR16499. 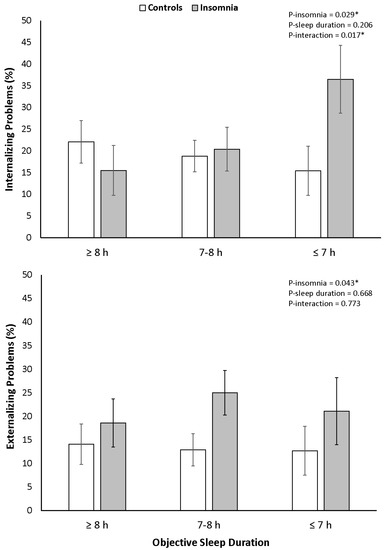 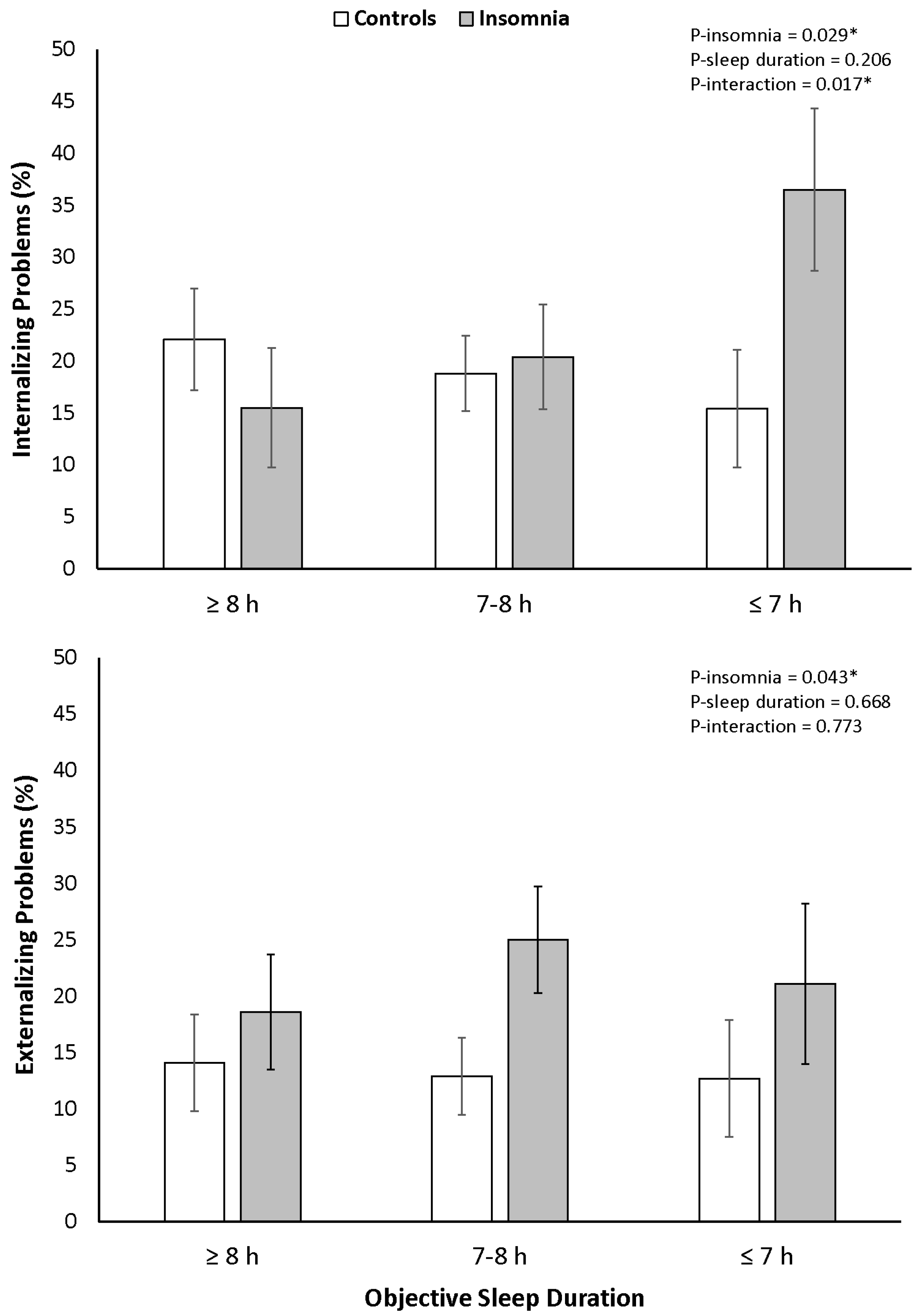 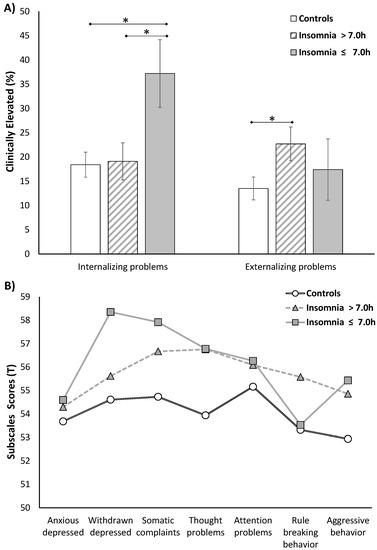 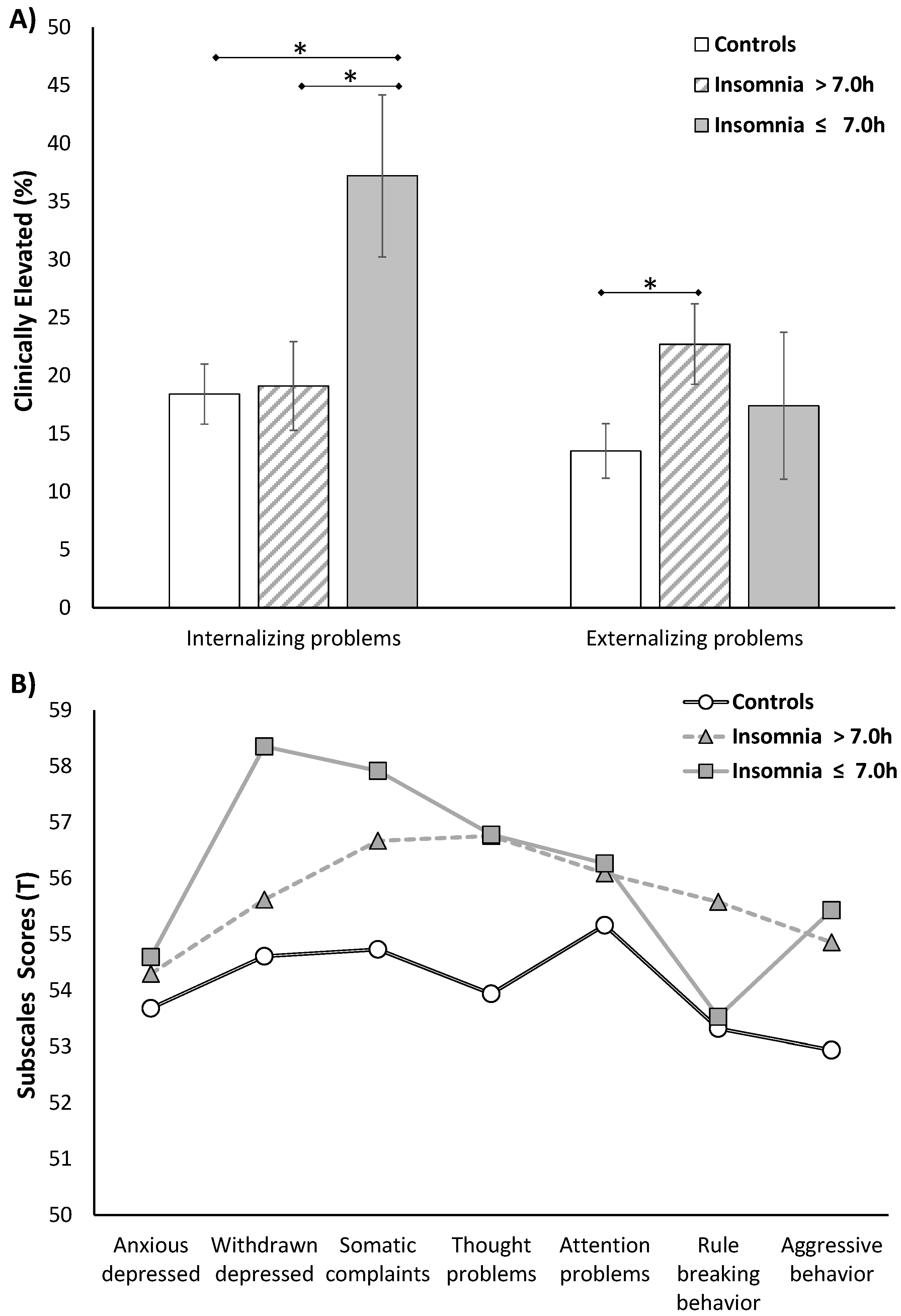