Although attention-deficit hyperactivity disorder (ADHD) has been linked to emotion dysregulation, few studies have experimentally investigated this whilst controlling for the effects of comorbid conduct disorder (CD). Economic decision-making games that assess how individuals respond to offers varying in fairness have been used to study emotion regulation. The present study compared adolescent boys with ADHD (n = 90), ADHD + CD (n = 94) and typical controls (n = 47) on the Ultimatum Game and examined the contribution of ADHD and CD symptom scores and callous and unemotional traits to acceptance levels of unfair offers. There were no significant differences in acceptance rates of fair and highly unfair offers between groups, and only boys with ADHD did not significantly differ from the controls. However, the subgroup of boys with ADHD and additional high levels of aggressive CD symptoms rejected significantly more ambiguous (i.e., moderately unfair) offers than any other subgroup, suggesting impaired emotion regulation in those with ADHD and aggressive CD. Correlations within the CD group showed that the rejection rate to moderately unfair offers was predicted by aggressive CD symptom severity, but not callous and unemotional traits. These findings highlight the fact that ADHD is a heterogeneous condition from an emotion regulation point of view.
Keywords: emotion regulation; ADHD; conduct disorder; ultimatum game; aggression; callous-unemotional traits emotion regulation; ADHD; conduct disorder; ultimatum game; aggression; callous-unemotional traits

Participants were recruited from the Child and Adolescent Mental Health Services and Community Child Health Clinics in Wales. Children in the sample were of British Caucasian origin and met research criteria for a lifetime diagnosis of ADHD. Children with any known clinical or research diagnosis of schizophrenia, bipolar disorder, autistic spectrum disorder (ASD), Tourette’s syndrome or with an IQ < 70, epilepsy, brain damage or any other neurological or genetic disorder were excluded from the study. In total, 204 adolescent males with ADHD (mean age = 13.95 years, SD = 1.82; age range 10–17 years) took part in the present study. No participants were stimulant naive, but participants who were currently being prescribed stimulant medication were asked to come off their medication at least 24 h prior to testing.
Male control participants (NCs), aged 13–18 (mean age = 15.14 years; N = 47) were recruited from local comprehensive schools and youth centres from relatively deprived areas in Cardiff. The Youth Self Report (YSR; [60]) was used to screen for ADHD and CD. All NCs completed the Wechsler Abbreviated Scale of Intelligence (WASI; [61]) and the UG. Nobody had estimated IQ scores of <70.
Ethical approval was obtained from the Wales Multicentre Research Ethics Committee. Informed written consent was obtained for all accompanying parents and adolescents aged over 16 years. Written assent was obtained for younger adolescents.

Child psychopathology was assessed using the Development and Well Being Assessment (DAWBA) structured interview using both parents and children as informants [62]. Parents completed the ADHD and ODD/CD sections and children the ODD/CD section of the DAWBA. All interviews were administered by trained psychologists, supervised by an experienced clinician (AT). Symptom scores and diagnoses were generated from the DAWBA according to DSM-IV criteria (the DSM-V had not been published at the start of the study; [63]). CD symptoms were considered present if endorsed by either the parent or child. Given previous findings suggesting that DSM-IV defined aggressive CD items’ index CD heterogeneity [19,54], those with CD were further examined according to whether or not they had a high (>3) number of aggressive symptoms (as defined by DSM).
ODD has previously been viewed as being part of a CD diagnostic spectrum. It is characterised as a less severe form of CD, which is often a developmental precursor to CD [64]. However, ODD has since been shown to have some important diagnostic utility; in particular, the ability to predict risk for later emotional disorders after controlling for CD [65]. In the DSM-5, the exclusion criterion for CD has now been removed from the diagnostic criteria for ODD. ODD was therefore also assessed using the DAWBA to control for differences between groups.
CU traits were measured using the Youth Psychopathic traits Inventory (YPI; [66]). The CU subscale of the YPI contains 15 items, and each item is answered on a 4-point Likert scale (score range 15–60). The reliability and convergent validity of the YPI with other measures of CU traits has been established [67,68].
Parent-rated emotional symptoms were assessed using the Strengths and Difficulties Questionnaire (SDQ; [69]). This was also completed as part of the DAWBA. The five emotional items (worries, unhappy, afraid, clingy, somatic) were scored on a 3-point Likert scale and summed to obtain a total emotional symptom score (score range 0–10).
Cognitive ability was re-assessed on all current participants using the Wechsler Abbreviated Scale of Intelligence [61], 2-subset form (vocabulary and matrix reasoning). All of the participants came from community clinics, and none were stimulant naive. Participants who continued to take stimulant medication were asked to come off medication 24 h prior to testing.

In the Ultimatum Game [26], two players are given the opportunity to split a sum of money. One player (the proposer) proposes a way to split an amount of money with another player (the responder). These offers vary in fairness, and the participant must simply accept or reject the offers made to them. If the responder accepts the offer, both players are paid accordingly. If the offer is rejected, neither player is paid. The participants were instructed that the offers were real and had been made by previous participants of the same study. This was made more believable by asking participants to propose their offer (out of the options below), and after they had done so, their offer was stored in the database for use in future research [28]. In fact, the experimenter predetermined the offers, and photographs of the opponents/responders were taken from the Amsterdam Dynamic Facial Expression Set [70].
Offers made were either 5/5 (keep 5, give 5 points), 6/4 (keep 6, give 4 points), 7/3 (keep 7, give 3 points), 8/2 (keep 8, give 2 points) or 9/1 (keep 9, give 1). Participants were the responders in a series of 22 trials, in which they saw a photograph of a different person during each trial who made them an offer. In accordance with Koenigs and Tranel’s [26] paper, offers were generated in the following frequencies: two offers of 5/5 distribution, two offers of 6/4, six offers of 7/3, six offers of 8/2 distribution and six offers of 9/1 distribution. Sanfey et al. (2003) asked participants to rate what offers they considered to be fair, irrespective of whether they decided to reject or accept an offer. Of their participants, 58% considered any offer less than 5/5 as unfair, with the remaining 42% deeming anything less than 7/3 to be unfair. Therefore, although 100% of the participants deemed the offers of 8/2 and 9/1 unfair, participants were divided with respect to the fairness of the 6/4 and 7/3 offers. For these reasons, the offers were grouped into three groups: truly fair (5/5), very unfair (8/2 and 9/1) and moderately unfair (7/3 and 6/4).

Two ADHD participants had incomplete DAWBA data, so they could not be included. Eight ADHD participants did not complete the UG due to noncompliance; these participants had significantly more aggressive CD symptoms (p < 0.05). Ten participants had an estimated IQ < 70 and were excluded. Therefore, 184 ADHD participants were included in the analysis, as well as 47 control participants referred to as normal controls (NC). The ADHD group consisted of those with ADHD only (ADHD; n = 90). Those with additional CD (ADHD + CD; n = 94) were split into those with low aggressive CD symptoms (ADHD + CD/LA; n = 64) and high aggressive CD symptoms (ADHD + CD/HA n = 30), based on whether they were below or above the mean (mean = 3.33 symptoms). Between-subject ANOVAs were used to test differences in offers and acceptance rates between groups. Offers were grouped into three offer types: completely fair (5/5), moderately fair (6/4 and 7/3) and highly unfair (8/2 and 9/1). Because the UG variables were not normally distributed, follow up Bonferroni pairwise comparisons were bootstrapped and reported with 95% confidence intervals. Non-parametric Kruskal-Wallis tests were also conducted and found the same results.Effect sizes are reported as partial eta squared (η2p; small ≥0.01, medium ≥0.06, large ≥0.14; [71]). Anomalies (±3 standard deviations away from the mean for each group) were removed and replaced with the mean of that variable. One-way ANOVAs were used to compare demographic and clinical variables between groups. Spearman’s correlations and regressions examined the effect of these clinical variables on the UG outcome variables. Analyses were carried out using SPSS 16.0 (SPSS Inc., Chicago, IL, USA). 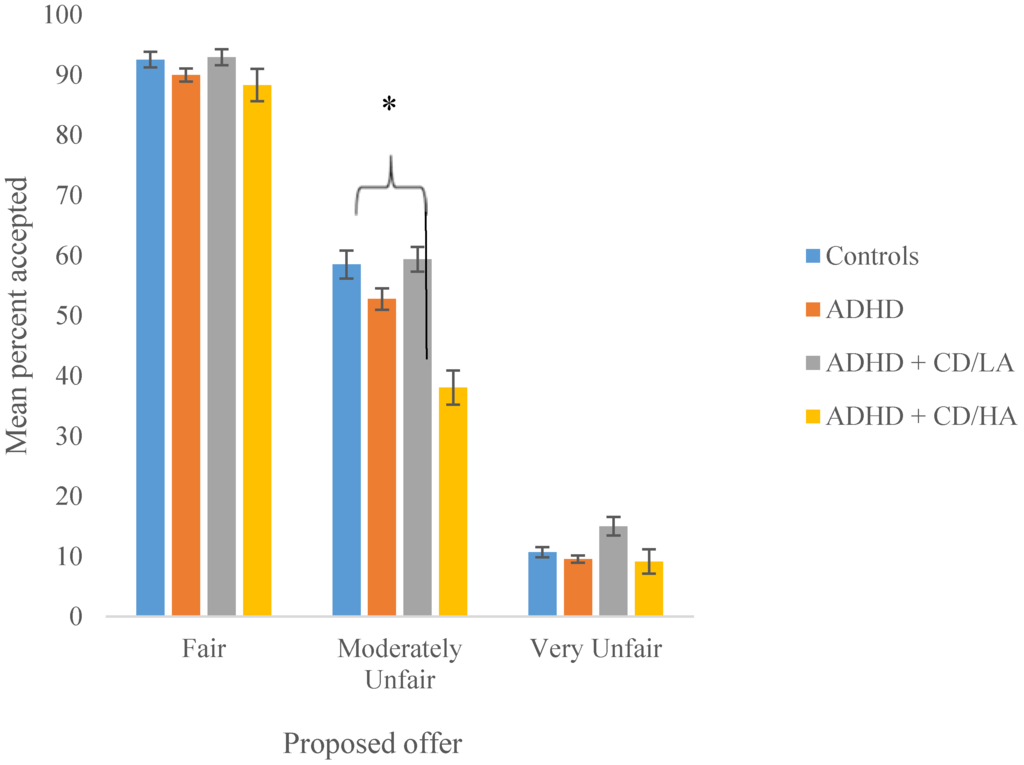 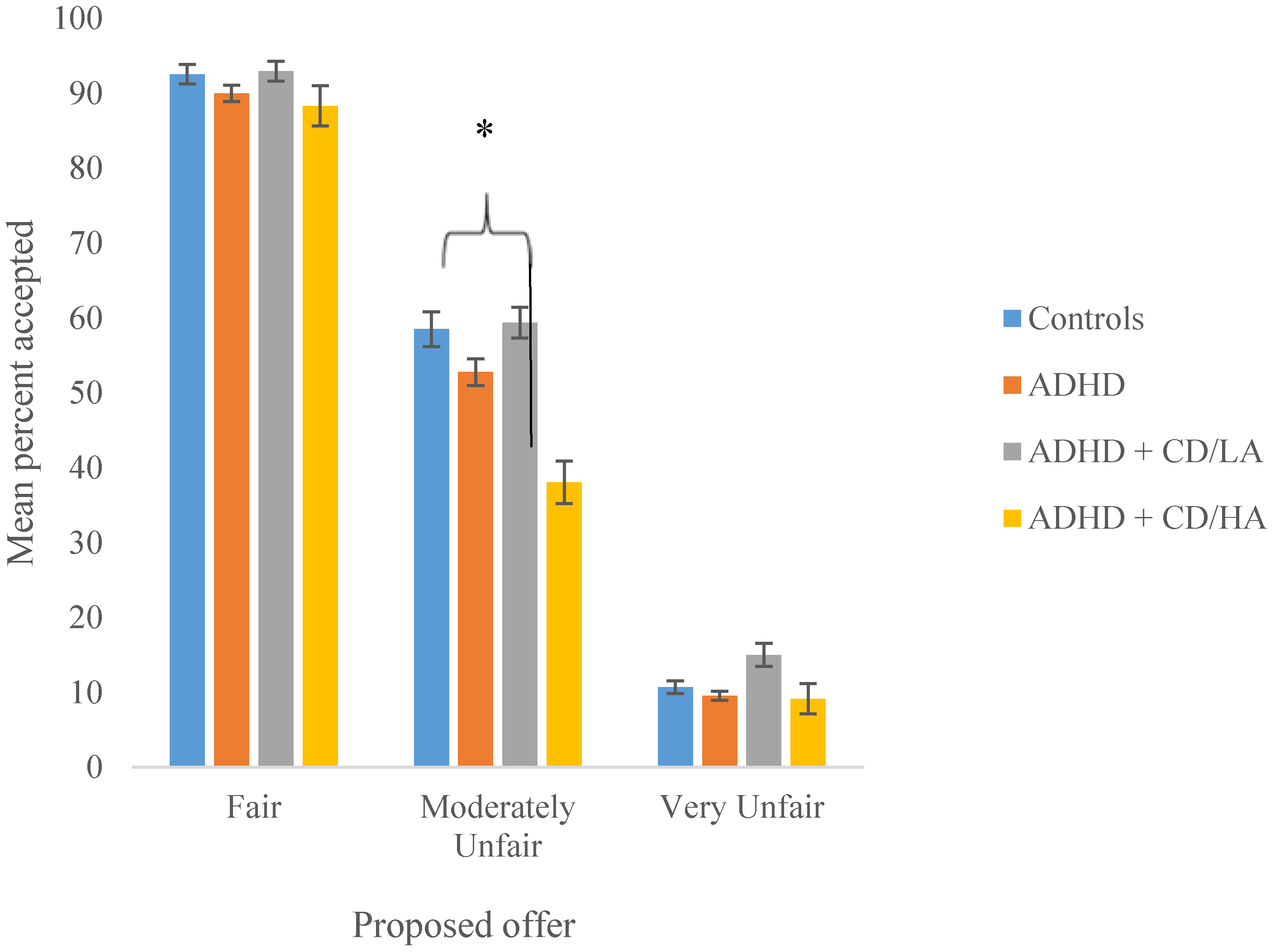 Due to the difference found between the two CD groups, we wanted to explore the variation in symptoms between them. As shown in Table 1, the high aggressive group also reported more non-aggressive symptoms. It was therefore important to find out whether it was aggressive symptoms in particular or CD severity in general that predicted performance on the UG. Table 3 shows that both total CD score and aggressive CD score were significantly correlated with the acceptance rate of moderately unfair offers; none of the other demographic characteristics, including CU traits, were correlated.

In conclusion, this study of adolescent boys with ADHD and controls found a significant difference in the acceptance rate of ambiguously unfair offers of boys with ADHD and highly aggressive CD. The results suggest that it is the subgroup of boys with both ADHD and predominantly aggressive CD that has difficulty with emotion regulation, which causes them to make more “irrational” decisions. Importantly, boys with ADHD alone did not differ from controls in performance on the decision-making task. Further research is needed to better understand how emotion regulation influences decision-making and antisocial behaviour in the short and long term amongst adolescents, including those with psychiatric disorder.

This research has been supported by a grant (G1000632) from the U.K. Medical Research Council awarded to Anita Thapar, Stephanie van Goozen and Kate Langley.
We are very grateful to all of the participants and their families who participated. We thank Valerie Russell for administrative support and Sharifah Syed, Erika Baker, Daniel Burley, Kelly Hubble, Karen Schepman, Katy Bowen, Joanne Morgan and Omer Minhas for research support.