Serum Activin A as Brain Injury Biomarker in the First Three Days of Life. A Prospective Case—Control Longitudinal Study in Human Premature Neonates

The antisense oligonucleotide nusinersen has been shown to improve trunk and limb motor function in patients with spinal muscular atrophy (SMA). Bulbar dysfunction, which is regularly present in SMA, is not captured by standard motor scores, and validated measurement instruments to assess it have not yet been established. Data on whether and how bulbar function changes under gene-based therapies in adult SMA patients are also unavailable. Here, we present data on the course of bulbar dysfunction assessed prospectively before nusinersen treatment initiation and 6 and 14 months later in 23 adult SMA patients using the Sydney Swallow Questionnaire (SSQ) and the bulbar subscore of the Amyotrophic Lateral Sclerosis Functional Rating Scale Revised (ALSFRS-R). While no improvement in bulbar scores was observed under treatment with nusinersen, the absence of a decline still implies a therapeutic effect of nusinersen on bulbar dysfunction. The results of this study aim to contribute to a standardized assessment of bulbar function in adult SMA patients, which may show therapeutic effects of gene-based therapies that are not evident from standard motor scores.
Keywords: spinal muscular atrophy; ASO; ALSFRS-R; SSQ; swallowing spinal muscular atrophy; ASO; ALSFRS-R; SSQ; swallowing

The hereditary autosomal recessive neuromuscular disorder, 5q-associated spinal muscular atrophy (SMA), causes progressive weakness of the trunk, limb, ventilatory and bulbar muscles. The most common cause is a homozygous deletion or compound heterozygosity with deletion and point mutation in the survival motor neuron 1 (SMN1) gene [1], resulting in reduced expression of the corresponding SMN protein and consequent degeneration of spinal motor neurons [2]. The most important disease modifier is the SMN2 gene, which differs in only five base pairs from SMN1, leading to the expression of a truncated SMN protein. The copy number of SMN2 correlates inversely with disease severity [3]. Onset age and the best motor milestone achieved characterize different historical disease phenotypes, with types 0–4 corresponding to decreasing motor function [4]. Weakness and atrophy primarily affect axial and proximal muscle groups but also bulbar muscles due to the involvement of brainstem motor nuclei. Feeding disability is prevalent in approximately one-third of SMA patients [5]. In the “pretherapeutic” era, SMA type 1 patients suffered from symptoms during early infancy and most often died before the age of two without mechanical ventilation due to severe bulbar and respiratory impairment, type 2 patients typically achieved the ability to sit, and type 3 patients achieved the ability to walk independently and had a normal life expectancy [6]. Nonetheless, the natural course of the disease is chronic and progressive with a loss of motor milestones over time [7].
The antisense oligonucleotide nusinersen was the first causative treatment option for SMA. It alters splicing of the premRNA of SMN2, leading to increased formation of full-length SMN protein [8]. Nusinersen leads to relevant motor improvements, which has been shown in two large pivotal studies enrolling children with type 1 and type 2 SMA [9,10] and with increasing real-world evidence in adult SMA patients [11,12,13]. To objectively evaluate motor improvement, established motor function scales such as the Hammersmith Functional Motor Scale Expanded (HFMSE) and the Revised Upper Limb Module (RULM) have been used. However, these scores represent only trunk and extremity function, and bulbar function in adult SMA patients under therapy with nusinersen has not been comprehensively assessed to date. Impaired bulbar function, which manifests as difficulties in mouth opening, chewing and swallowing, is especially evident in early and severely affected SMA patients, mostly SMA type 1 and 2 patients, with an increasing incidence with a longer disease course [14]. Several studies investigating particular bulbar function components such as the mandibular range of motion, including the maximal mouth opening, bite force, masticatory function and swallowing using clinical, electrophysiological and video fluoroscopic examinations, questionnaires and MRI scans found that these functions were reduced in SMA patients, particularly in those with type 1 and 2 disease [14,15,16]. However, measures of bulbar function in SMA, especially in adult patients, have not yet been validated and standardized.
With an evolving therapeutic landscape, a standardized assessment of bulbar function in addition to already established motor scores is essential to improve therapeutic outcome measures. The purpose of this study was to assess bulbar function in adult SMA patients receiving nusinersen.

The study was conducted at the Department of Neurology, University Medicine Essen, Germany. Data were collected prospectively from July 2017 until May 2021. Patients provided written informed consent prior to their inclusion in the study. The study was approved by the local ethics committee of the University of Duisburg Essen, Germany (approval number 18-8071-BO). Of a total of 57 SMA patients who had received at least 5 injections of nusinersen by May 2021, 22 patients with SMA type 2 and 3, documented bulbar dysfunction before treatment initiation and without a percutaneous enteroscopic gastrostoma were included in the analyses. All patients had molecularly confirmed 5q-SMA and had been on therapy for at least 6 months. A total of 19 patients had already received 7 injections of nusinersen at the time of data analysis, i.e., they had already been on therapy for 14 months. Nusinersen was administered intrathecally at 12 mg initially for saturation on days 1, 14, 28 and 63 and, then, consecutively at four-month intervals in accordance with the label [17].

Bulbar function was assessed with bulbar function items of the Amyotrophic Lateral Sclerosis Functional Rating Scale Revised (ALSFRS-R) and using the Sydney Swallow Questionnaire (SSQ). Data collection was conducted during the patients’ visits for nusinersen injection before the first injection (T0, baseline), after 6 months of therapy (T1) and after 14 months of therapy (T2). Both assessment tools are questionnaire-based, and the German versions were used. The ALSFRS-R is an established and validated measurement tool for monitoring disability progression in patients with amyotrophic lateral sclerosis [18]. Three of 12 items—speech, salivation and swallowing—reflect bulbar function in this tool and, thus, represent the bulbar subscore of the ALSFRS-R. Each item can be assigned a score of 0–4, resulting in a total possible score of 0–12 for the bulbar subscore, with lower scores indicating more severe bulbar impairment. The SSQ is a patient-reported outcome measure primarily assessing complaints of oropharyngeal dysphagia and has been shown to be valid, reliable and sensitive for assessing neurogenic, structural and age-related swallowing complaints in several patient populations in its German version [19]. It consists of 17 questions addressing subjective swallowing difficulties, e.g., bolus consistency, duration of food intake and signs of penetration, aspiration and regurgitation. The questions are designed to cover three subscales of global swallowing function, physical impairments and swallowing-related quality of life. Answers are given on a visual analog scale of 100 mm in length such that an arithmetic mean of 0–100 can be calculated from all 17 questions, with higher scores indicating more severe bulbar impairment.
Additionally, HFMSE and RULM scores, as established measures of extremity motor function in SMA, were obtained at T0, T1 and T2. The HFMSE consists of 33 items addressing activities of daily living, each rated on a 3-point scale (0–2). The maximum total score is 66 [20]. The RULM assesses upper extremity function and consists of 19 items, all but one of which is rated on a 3-point scale (0–2). The maximum total score is 37 [21]. Both scores are particularly used for type 2 and 3 SMA patients, with higher scores indicating better motor function, and have been validated even in young adults [22].

For pre-post comparisons of the bulbar subscore of the ALSFRS-R and SSQ scores between T0 and T1 and between T0 and T2, a Wilcoxon signed rank test was performed. In secondary analyses, pre-post comparisons were also performed for the HFMSE and RULM. Descriptive statistics contain all available data at the respective time points, regardless of whether a complete dataset T0, T1 and T2 was available for a patient, other than in the pre-post comparisons. The results were visualized in boxplots with mean lines added. In subgroup analyses, separate pre-post comparisons were calculated for type 2 and type 3 SMA patients. Correlations for baseline values were calculated using Spearman’s rank correlation coefficient between the subscore of the ALSFRS-R and the SSQ score and between the two bulbar scores and the HFMSE and RULM scores. Alpha was set to ≤ 0.05. Bulbar function scores were correlated with SMN copy number and age in exploratory analyses.

This study was sponsored by Biogen (Cambridge, MA, USA).

The study was conducted according to the guidelines of the Declaration of Helsinki and approved by local ethics committee of the University of Duisburg Essen, Germany (approval number 18-8071-BO). 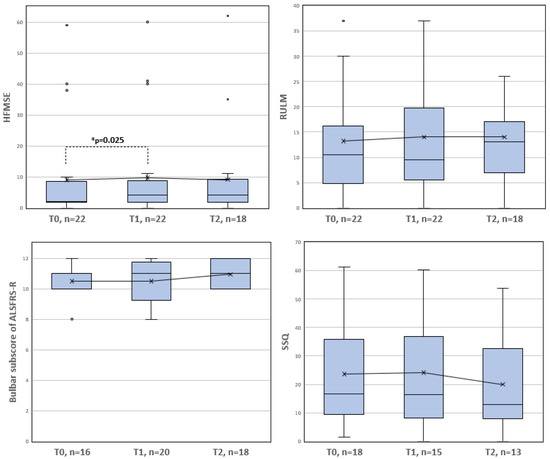 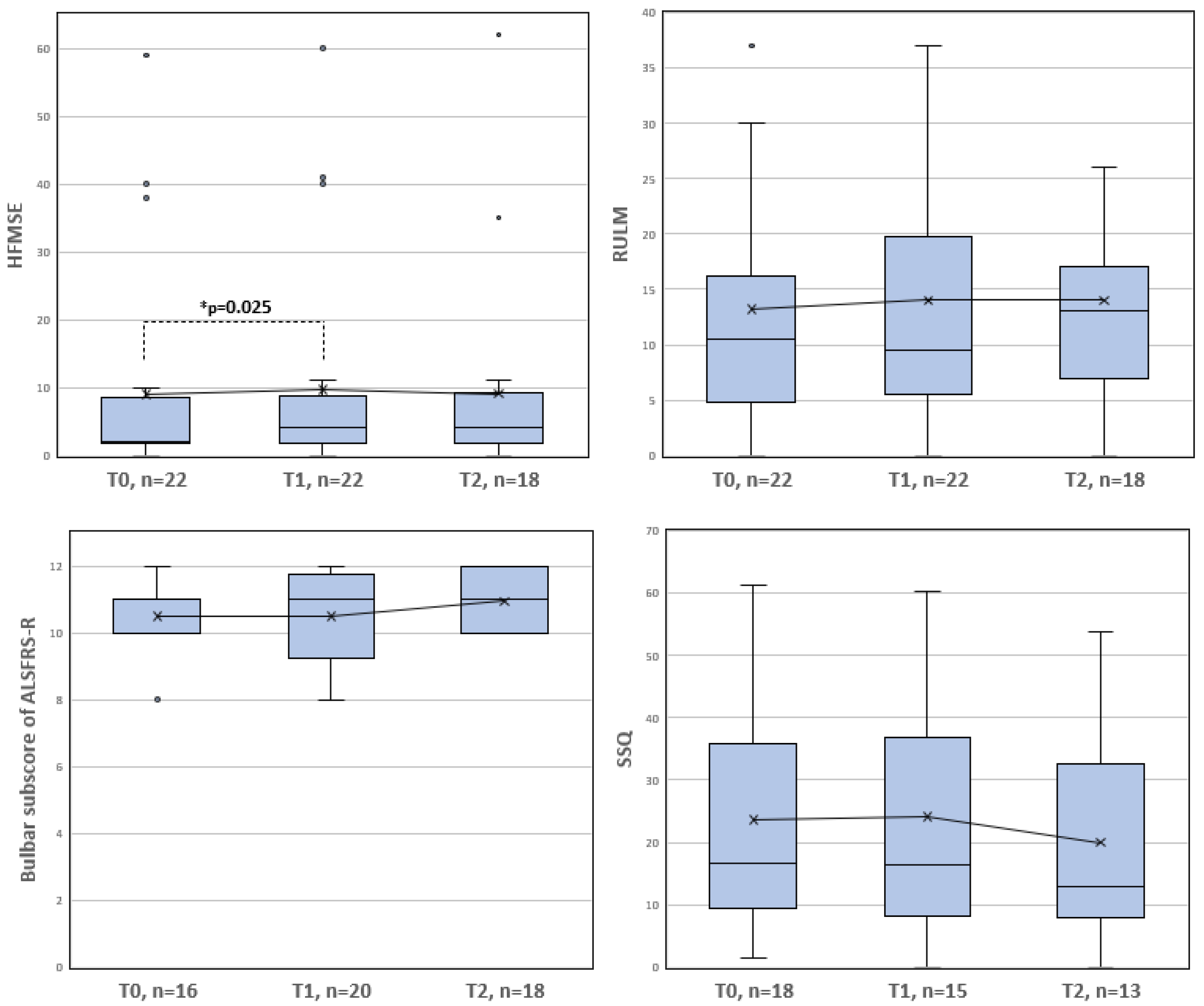