Olfactory Perception in Relation to the Physicochemical Odor Space

Body odours and their importance for human chemical communication, e.g., in the mother–child relationship, are an increasing focus of recent research. Precise examination of sampling methods considering physiology and feasibility aspects in order to obtain robust and informative odour samples is therefore necessary. Studies comparing body odour sampling at different body sites are still pending. Therefore, we sampled axilla, breast, and head odour from 28 mother–infant dyads and examined whether odour perception differs with regard to the body site. The participating mothers were asked to evaluate their own and their infant’s body odour samples, as well as odours of two unfamiliar mother–infant dyads. We tested whether maternal pleasantness and intensity evaluation, as well as recognition ability of the odours differed between the body sites. In infants, the head odour exhibited slightly lower pleasantness ratings than axilla and breast, and intensity ratings did not differ between body sites. In mothers, body site affected intensity ratings but not pleasantness ratings, as the breast odour was rated as less intense compared with head and axilla. Across all body sites, mothers rated the own and their infant’s odour as less intense when compared with unfamiliar samples. Recognition ability did not differ between body sites, and in line with previous studies, mothers were able to recognize their own and their own infant’s odour above chance. In sum, our study extends the previous methodological repertoire of body odour sampling and indicates that the axilla, breast, and head of adults as well as infants serve as informative odour sources. View Full-Text
Keywords: body odour; sampling methods; body parts; body sites; family odours; chemosignals; odour sampling; kin recognition body odour; sampling methods; body parts; body sites; family odours; chemosignals; odour sampling; kin recognition
►▼ Show Figures 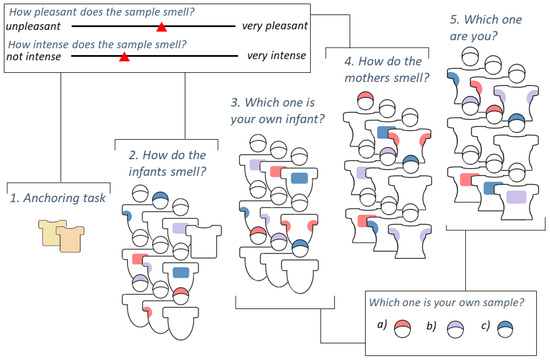