Anxiety, Perceived Stress, and Resilience during the COVID-19 Pandemic: Population Estimates of Persons Presenting to a General Practitioner in Romania
Previous Article in Special Issue

From aMCI to AD: The Role of Visuo-Spatial Memory Span and Executive Functions in Egocentric and Allocentric Spatial Impairments

:
In memory, representations of spatial features are stored in different reference frames; features relative to our position are stored egocentrically and features relative to each other are stored allocentrically. Accessing these representations engages many cognitive and neural resources, and so is susceptible to age-related breakdown. Yet, recent findings on the heterogeneity of cognitive function and spatial ability in healthy older adults suggest that aging may not uniformly impact the flexible use of spatial representations. These factors have yet to be explored in a precisely controlled task that explicitly manipulates spatial frames of reference across learning and retrieval. We used a lab-based virtual reality task to investigate the relationship between object–location memory across frames of reference, cognitive status, and self-reported spatial ability. Memory error was measured using Euclidean distance from studied object locations to participants’ responses at testing. Older adults recalled object locations less accurately when they switched between frames of reference from learning to testing, compared with when they remained in the same frame of reference. They also showed an allocentric learning advantage, producing less error when switching from an allocentric to an egocentric frame of reference, compared with the reverse direction of switching. Higher MoCA scores and better self-assessed spatial ability predicted less memory error, especially when learning occurred egocentrically. We suggest that egocentric learning deficits are driven by difficulty in binding multiple viewpoints into a coherent representation. Finally, we highlight the heterogeneity of spatial memory performance in healthy older adults as a potential cognitive marker for neurodegeneration, beyond normal aging.
Keywords:
spatial memory; frames of reference; aging; MoCA; cognitive flexibility; mental representations

Thirty older adult participants (nfemale = 22; Mage = 75.82 years; SDage = 6.00; Meducation = 15.55 years; SDeducation = 2.49) were recruited as part of an ongoing study of aging at the University of Toronto and Rotman Research Institute, Baycrest Health Sciences. Inclusion criteria for all participants were as follows: fluent in English, normal or corrected-to-normal vision and hearing, and no history of neurological or psychiatric disorders. Data was collected across 2 sessions on separate days to reduce participant fatigue, with 20 participants returning for the 2nd session an average of 96 days later. Due to the ongoing COVID-19 pandemic, we were unable to reschedule the remaining 10 participants for a 2nd session, so fewer trials of the spatial memory task were included for these participants (see statistical analyses below). The spatial ability questionnaire and neuropsychological assessment (see Table 1) were administered in the first session, including the Montreal Cognitive Assessment (MoCA; MMoCA = 25.36, SDMoCA = 1.70) [40]. One participant scored below 20 on the MoCA and was therefore excluded from subsequent analyses, as per previous findings suggestions that older adults scoring ≤19 on the MoCA may already be displaying signs of dementia [41,42]. Informed consent was given by each participant before beginning the study. The study was approved by the Research Ethics Committee at both the University of Toronto and the Rotman Research Institute, respectively.

Each participant completed the MoCA, a brief demographics survey, and the neuropsychological assessment at the beginning of the first experiment session. An independent, trained experimenter administered and scored the MoCA to ensure that the experimenter conducting the virtual environment memory task was blind to the participant’s cognitive status during testing. The neuropsychological assessment included the following: Trail Making Test Trail A and Trail B [43]; Digit Symbol Substitution [44]; 1 min phonemic verbal fluency (FAS); 1 min categorical verbal fluency (Animal Naming); the Brief Visuospatial Memory Test—Revised (BVMT-R) [45]; the Rey Auditory Verbal Learning Test (RAVLT) [46] (see Table 1). Next, participants completed a spatial ability questionnaire—the Navigation Strategies Questionnaire (NSQ) [25]. The NSQ is a self-reported measure of individual preferences for strategies when navigating through space, and participants can be categorized as “scene-based” navigators (for an overall negative score) or “map-based” navigators (for an overall positive score) on the 14 items in the questionnaire. Map-based navigators are generally thought to have greater flexibility in navigation than scene-based navigators [47], with the former type of navigator demonstrating a preference for relying on an allocentric, survey-view of the environment.

The spatial memory task required participants to learn a series of environments created on the virtual reality platform OpenMaze [51], using Unity 3d (www.unity3d.com, Unity Technologies, accessed on 12 September 2018). Six environments were each designed with four distinct landmarks at each cardinal direction (i.e., North, South, etc.) to represent familiar, everyday spatial scenes (i.e., city, playground, ski resort, forest, construction site, farm) and the order of presentation of environments was randomized across participants. All environments could be seen from an allocentric 2D survey view and an egocentric 3D view, which were presented on a 15” Dell laptop screen. Each environment contained 5 unique everyday objects randomly assigned from a selected list of 30 possible objects from the Bank of Standardized Stimuli (BOSS) [52] on the basis of previously collected familiarity ratings (minimum 3.8/5) [52,53]. These objects, which were resized to have the same dimensions, were located at various coordinates within a 30 × 30 virtual square meter arena inside each environment and would rotate to face the participant’s viewing direction. The floor in each environment arena contained a grid tile pattern to aid in creating a sense of depth, but importantly, these tiles were not aligned with the positions of any object, so that counting tiles from the arena walls as a strategy was not useful. Critically, no 2 objects were located closer than 3 virtual meters from each other, and the 5 object locations were designed to be randomly dispersed across the 4 quadrants of the square arena to control for difficulty in locating each object across environments.
To navigate within an environment, participants used the keyboard arrow keys, with the up and down keys allowing forward and backward movements, respectively, and the right and left arrow keys allowing rotation in place. Environments presented in the egocentric frame of reference were seen by the participant from a first-person perspective, such that the laptop screen represented their field of view. Environments in the allocentric frame of reference were presented from a top–down survey perspective, with a blue arrow icon representing their position in the arena (Figure 1A). In both frames of reference, participants were limited to one direction of movement at a time (i.e., participants could not rotate and move forward simultaneously). The starting location was always in the center of the arena to minimize participants’ disorientation.

In the testing phase of the spatial memory task, participants had to recall the locations of the objects that they had learned in each environment (Figure 2). Participants were placed in the environment arena, which no longer contained the objects they had seen during the learning phase. They would recall all five of the objects in one frame of reference and then they would recall the objects in the other frame of reference; the order presentation of the frames of reference in the testing phase was randomized for each block. Each object would be displayed for 6 s on-screen before they would see the empty environment arena. To recall an object’s location, participants were instructed to navigate to the precise location where they thought they had collected the object during the learning phase and then press the space bar to indicate their response. In the egocentric frame of reference, this required participants to move in a first-person point of view to the same location as they had been when they collected the object during the learning phase. Similarly, in the allocentric frame of reference, participants navigated a blue arrow icon in the arena to recall an object’s location and pressed the space bar to indicate their response. Participants were encouraged by the experimenter to be as precise as possible, but to take their best guess if they were unsure of their response. Note that during the testing phase, the direction that the participant (or the blue arrow icon) was facing did not matter to their response, nor did it have to match the same direction as during the learning phase.

Informed consent was given by each participant before beginning this study.

The list of object stimuli and the data set analyzed during the current study has been deposited in a public repository through the Open Science Framework, with the identifier doi:10.17605/OSF.IO/P8Q6Y.

The authors thank Nathanael Shing for his assistance with study coordination and for facilitating data collection. 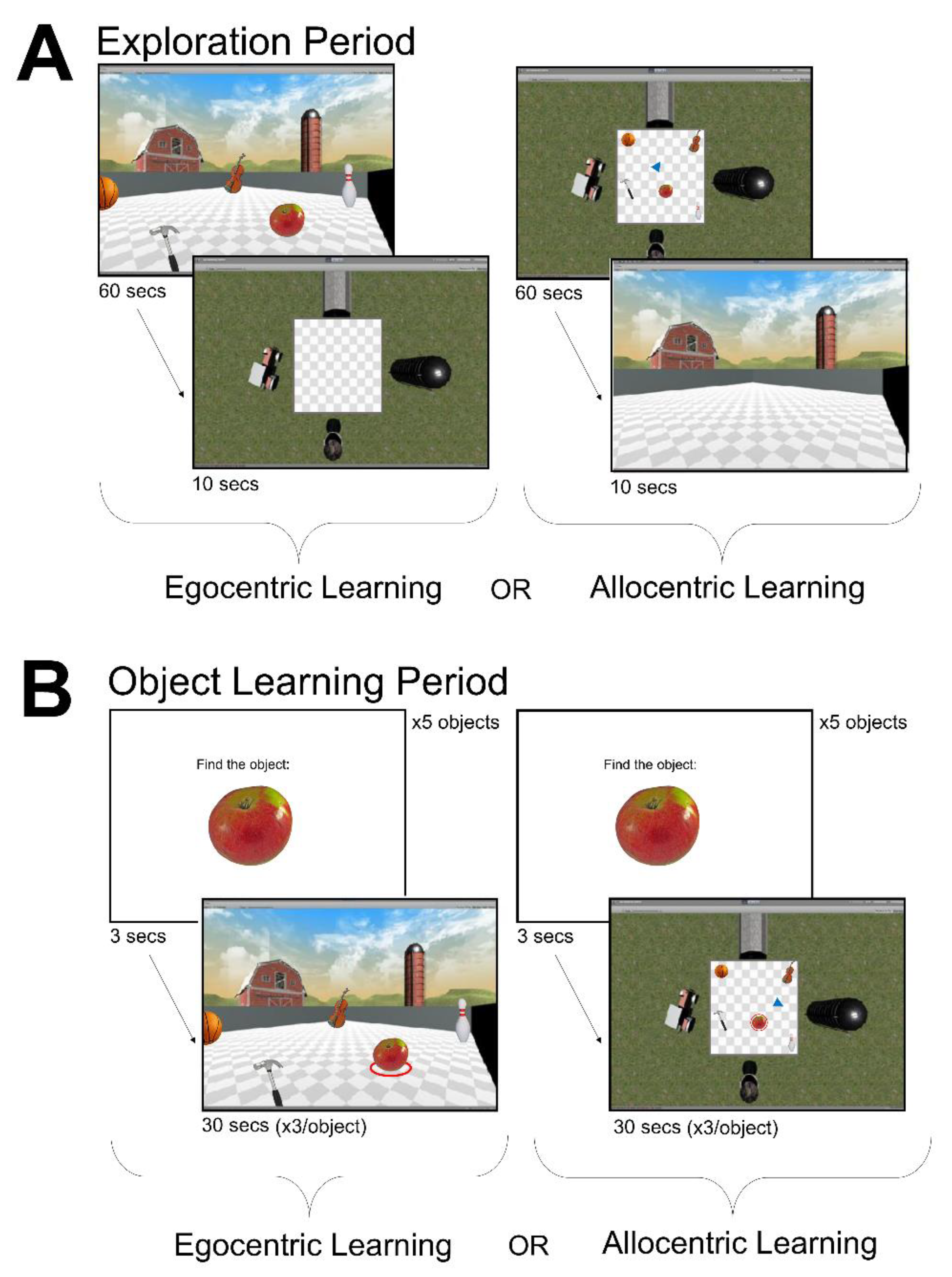 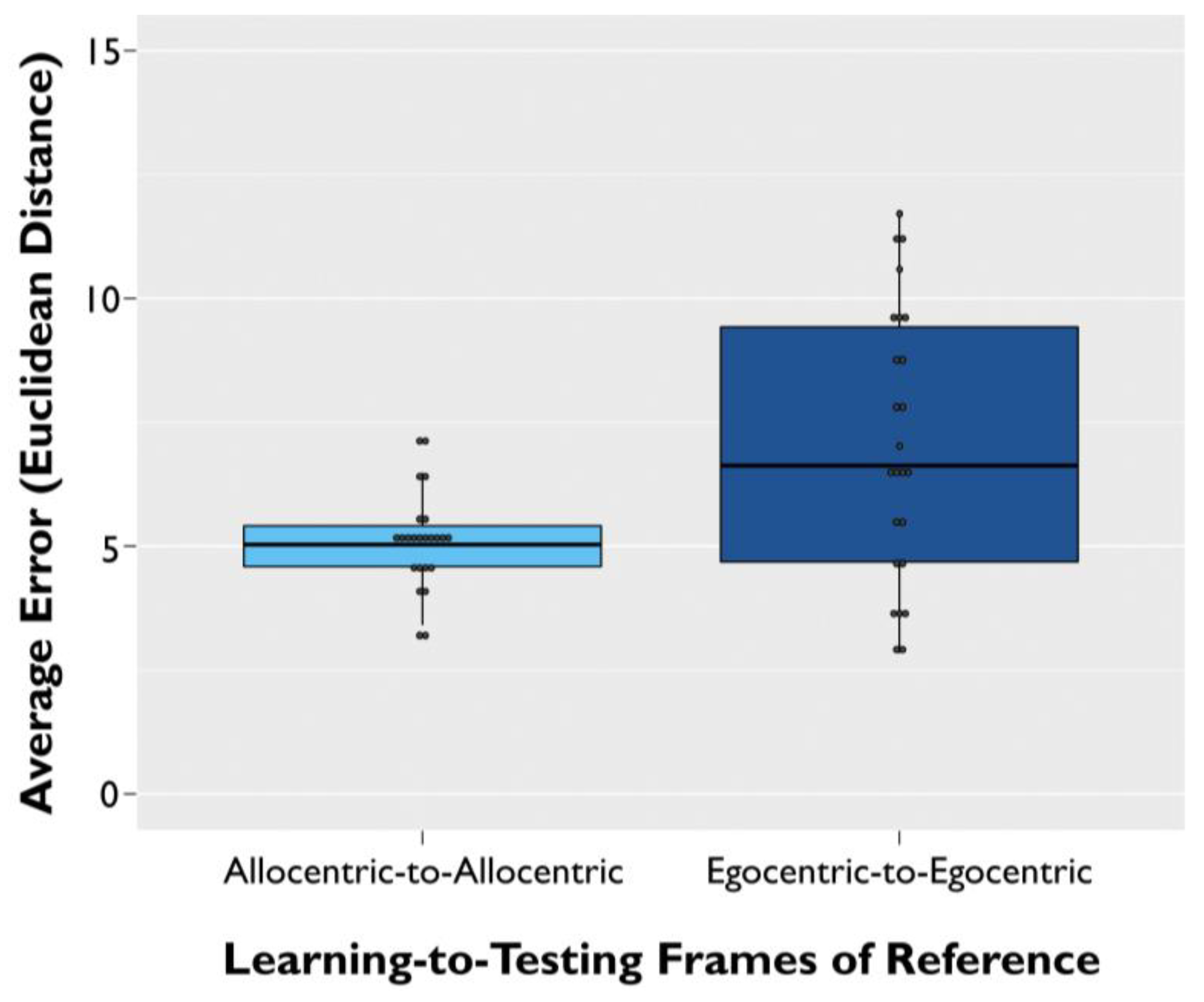 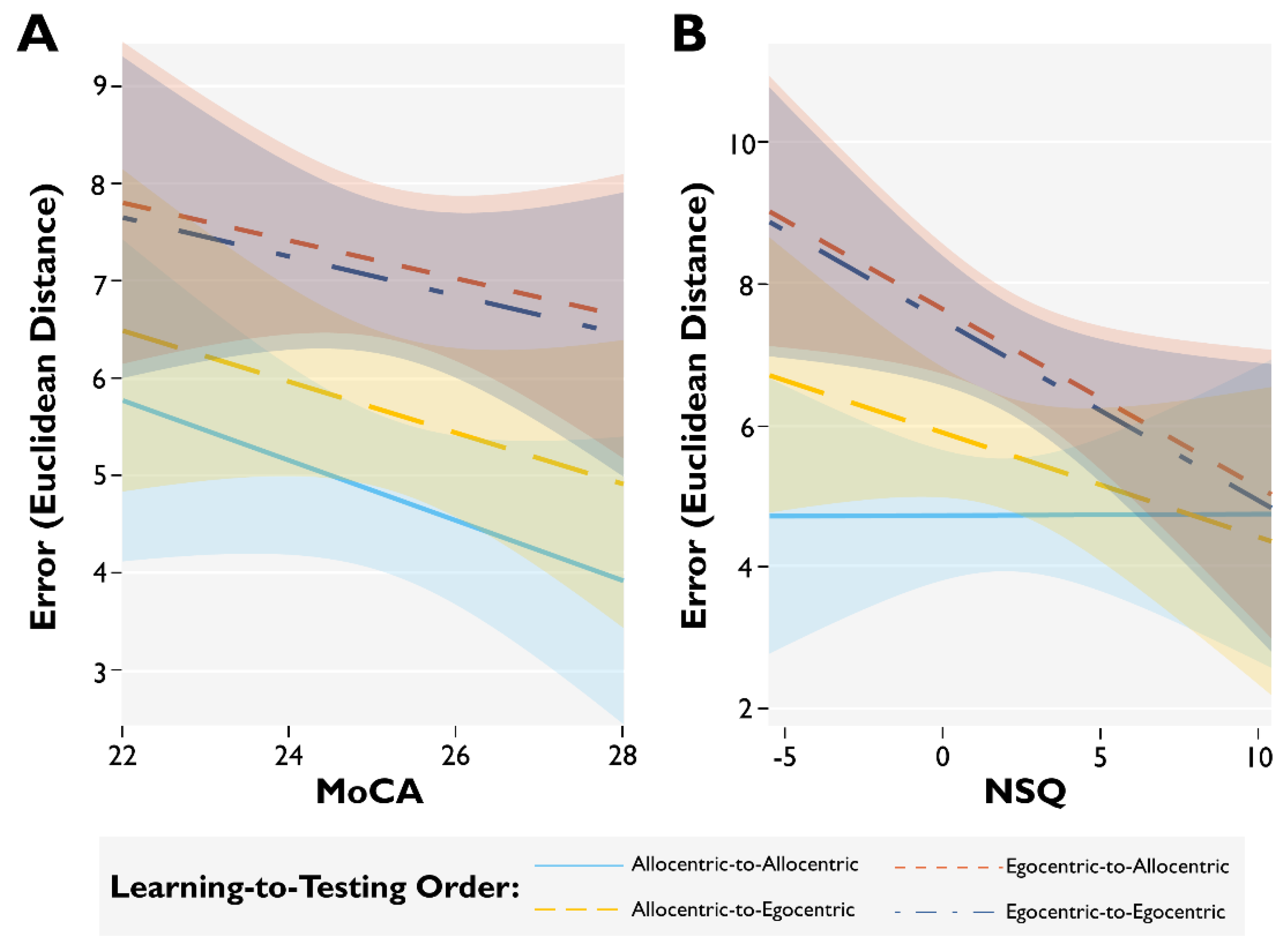