This paper investigates the influence of a phosphogypsum dump on the surrounding environment (soil ecosystem) in the Sumy region (Ukraine). Analysis of the surrounding soils was performed to study the possible presence of compounds leaching from the dump. For physical chemical analysis of samples, X-ray fluorescence (XRF) analysis, X-ray diffraction (XRD) analysis, and Fourier transform infrared spectrophotometry (FTIR) were used. XRF analysis did not confirm the contamination of soils around the phosphogypsum dump, and the soil fluoride levels measured in this study were comparable to the average soil fluoride concentration of soils globally. The colonization of the surface of the phosphogypsum dump by living organisms after the reclamation process was also analyzed. Field research was carried out on the routes, which specify the boundaries of the contours of plant communities, for description of phytocenoses in the territory of the dump, where the pH value ranged from 2.5 to 5.3, depending on the age of phosphogypsum terraces. Annual and perennial herbaceous plants are dominant on the reclaimed dump slopes. On the third and fourth phosphogypsum terraces (20 and 25 years old, respectively), tree forms have begun to settle, represented mainly by Populus tgemula, Populus alba, Betula pendula, and Robinia pseudoacacia. The studied patterns of ecological groups of plants growing under natural change of species can be used for the complete reclamation of the dump. View Full-Text
Keywords: phosphogypsum dump; soil ecosystem; plant communities; reclamation phosphogypsum dump; soil ecosystem; plant communities; reclamation
►▼ Show Figures 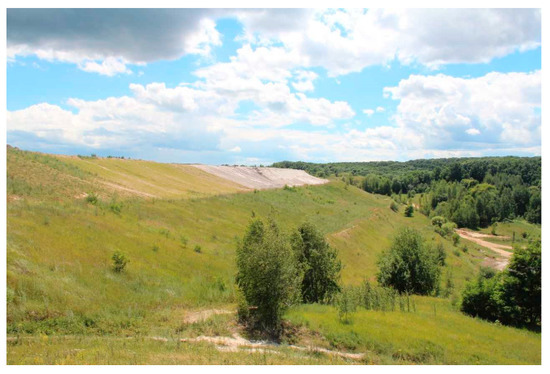