Different Paths to Achieve High Technological Innovation in Clustered Firms: An Analysis of the Spanish Ceramic Tile Industry
Next Article in Special Issue

:
The location, velocity, and flight path angle of an autonomous unmanned aerial vehicle (UAV) landing on a moving vessel are key factors for an optimal landing trajectory. To tackle this challenge, this paper proposes a method for calculating the optimal approach landing trajectory between an UAV and a small vessel. A numerical approach (iterative method) is used to calculate the optimal approach landing trajectory, and the initial lead is introduced in the calculation process of the UAV trajectory for the inclination and heading angle for accuracy improvement, so that the UAV can track and calculate the optimal landing trajectory with high precision. Compared with the variational method, the proposed method can calculate an optimal turning direction angle for the UAV during the landing. Simulation experiments verify the effectiveness of the proposed algorithm and give optimal initialization values.
Keywords:
unmanned aerial system (UAS); ship; trajectory planning; dichotomy search

Currently, large-scale and fast-speed marine vessels are widely used in numerous operations and missions. High-speed ships and large container ships can exceed 28 knots in speed, while existing patrol vessels for maritime surveillance reach lower speeds [1]. The operational conditions of patrol vessels give rise to disadvantages such as short visual range and slow response, rendering them unable to control the overall situation, and to continuously and effectively track illegal vessels for the efficient collection of evidence of illegal acts. The high-speed and high-efficiency of UAVs can effectively compensate for speed limitations of law enforcement vessels. A complete operational cycle of a UAV includes the three stages of launching, mission flight, and recycling. Both launching and autonomous flight technologies are considered relatively mature, whereas recycling is still a heated research topic in UAV technology [2].
Moreover, the autonomous landing of UAVs on moving vessels is a more complex scientific and engineering issue [3]. The landing environment of a ship-borne UAV is rather more complicated than that of a land-based UAV. Since the vessel is constantly moving during the landing of the UAV, a land-based UAV landing methodology should be applicable otherwise the UAV might fall directly into the sea. In particular, the sea cannot provide the necessary landmarks and the space required for landing. Even in aircraft carriers, the flight deck space is very limited, much smaller than the length of an onshore airport runway [4]. In the course of unmanned land or sea monitoring missions, the timestamp and trajectory of the carrying vessel are necessary for the required relay transmission of monitoring information [5]. Furthermore, the motion characteristics of the UAV and the vessel are essential for calculating the position of the vessel while the UAV is landing. Flight path planning of UAVs around dangerous areas have been studied in the literature [6]. Additionally, algorithms for the UAV minimum path length have been also considered in the literature [7,8]. Researches for optimizing such flight paths, while preventing collision accidents and improving flight safety, have been also proposed [9,10]. Finally, guidance challenges of UAVs flying along a predetermined trajectory have been presented [11].
Yi Feng et al. [12] proposed a UAV autonomous landing system based on model predictive control. The system dynamically models the UAV through a universal camera and uses the Kalman filter to come to the best location of the mobile platform. A model predictive controller was developed to land safely under various uncertainties and wind disturbances. Sánchez López et al. [13] proposed an autonomous landing algorithm that combines the Kalman filter with vision. By simulating the dynamics of different sea conditions and vessel decks and using a well-designed computer vision system, the ship deck is measured related to the posture of the drone. Wang Kai et al. [14] proposed a network-based UAV ship with a self-adaptive guidance system. By controlling the line-of-sight angle to track the angle of the flight path, the angle guidance law and the reverse guidance law are introduced. The purpose is to reduce the sensitivity of drone motion changes in ship parameters. Wang Liyang and other scholars [15] proposed a drone autonomous landing system based on airborne monocular vision, which can improve the ability of autonomous tracking and landing for drones under simulated sea conditions. Moriarty, P et al. [16] provided an artificial neural network-based autonomous landing method for UAVs. Using the data generated by simulating the sea motion, the current relative azimuth and distance of the UAV to the landing platform were calculated, and the coordinate pairs were calculated, which normalized processing for training neural networks.
Currently, research on the planning of a fixed-wing UAV landing trajectory on moving vessels is very rare. The above-mentioned UAV flight path planning research is mainly focused on land-based UAVs; thus further improvements are needed for meeting the requirements of sea flight and landing. However, when the flight procedure is executed, depending on the result of the current monitoring information, the change in the weather condition or the movement path of the carrier, the UAV movement set by the flight task can be significantly changed according to commands from the control panel. In this regard, it is necessary to control the possibility of the drone returning to the vessel carrier during the flight. In order to do this, it is necessary to determine the length of the minimum return path, taking into account the handling of the drone steering carrier and the proximity landing device. The ship-borne landing device used in this work is similar to the SideArm system published by Defense Advanced Research Projects Agency (DARPA) [17], with the current research proposing a method for calculating the optimal approach landing trajectory between the UAV and the small vessel. In this project, the possibility of a UAV return in any moment of the mission flight was analyzed. The planned landing flight trajectory can be divided into several stages, and in each stage the corresponding landing track parameters are calculated according to the flight mission and UAV flight performance.
The simulation results demonstrate the effectiveness of our proposed method allowing the UAV to consistently fly along the designed track with a smooth, safe, and reliable altitude. The proposed landing trajectory planning for fixed-wing UAVs can ensure for a safe and efficient UAV recovery task.

3.1. Optimal Approach Landing Trajectory Simulation between an UAV and a Vessel

4. Improving the Accuracy of the Optimal Approach Landing Trajectory

Since vessels are in a state of constant motion, the conventional UAV landing plans are obviously not efficient for such moving platform landings. In this paper, a method for calculating the optimal approach landing trajectory between an UAV and a small vessel is proposed. Simulation results demonstrate the ineffectiveness of conventional algorithms, since they present the following shortcomings: (1) At the point of approaching the landing trajectory III, the error between the actual UAV landing trajectory and the calculated optimal landing trajectory is large, which seriously affects the autonomous guidance accuracy; (2) at the points and of the calculated optimal trajectory, a step change in the dip angle seriously affects the UAV’s tracking planning path.
In order to tackle the above two problems, the initial lead is introduced in the calculation formula of the direction angle and dip angle of the UAV flight speed vector. Based on the performed simulation results, the introduction of the initial lead can effectively solve the above two problems and provide the optimal value of the initial lead.
In order to determine the initial error of the autonomous guidance segment, it is necessary to estimate the deviation of the calculated trajectory under the influence of the atmospheric random disturbance and the navigation system’s error. At the end of the uniform landing of the UAV near the point , the UAV needs to keep a lower flight height in order to achieve a connection to the landing device.

The authors would like to thank the anonymous reviewers for their constructive comments and suggestions. 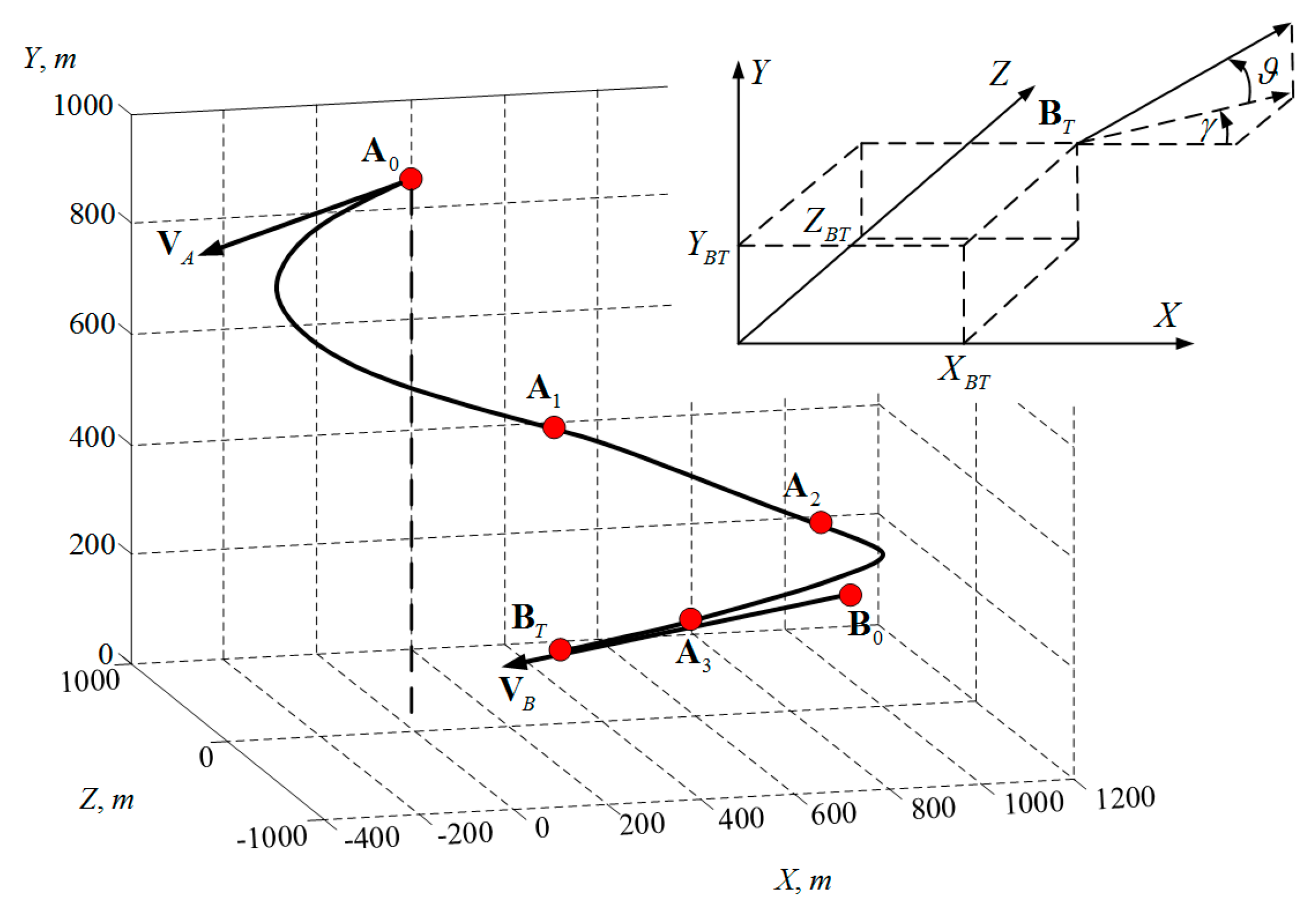 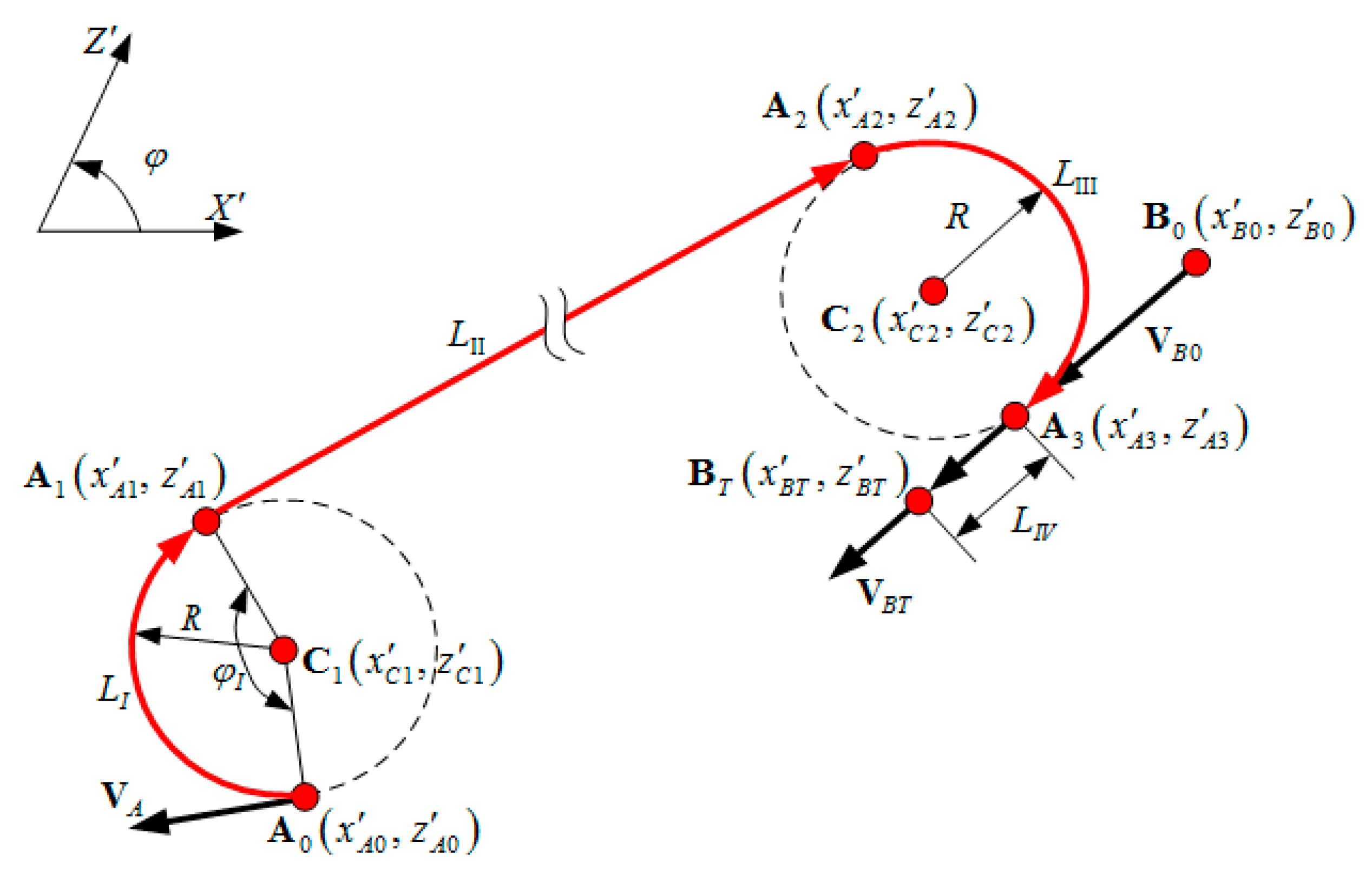 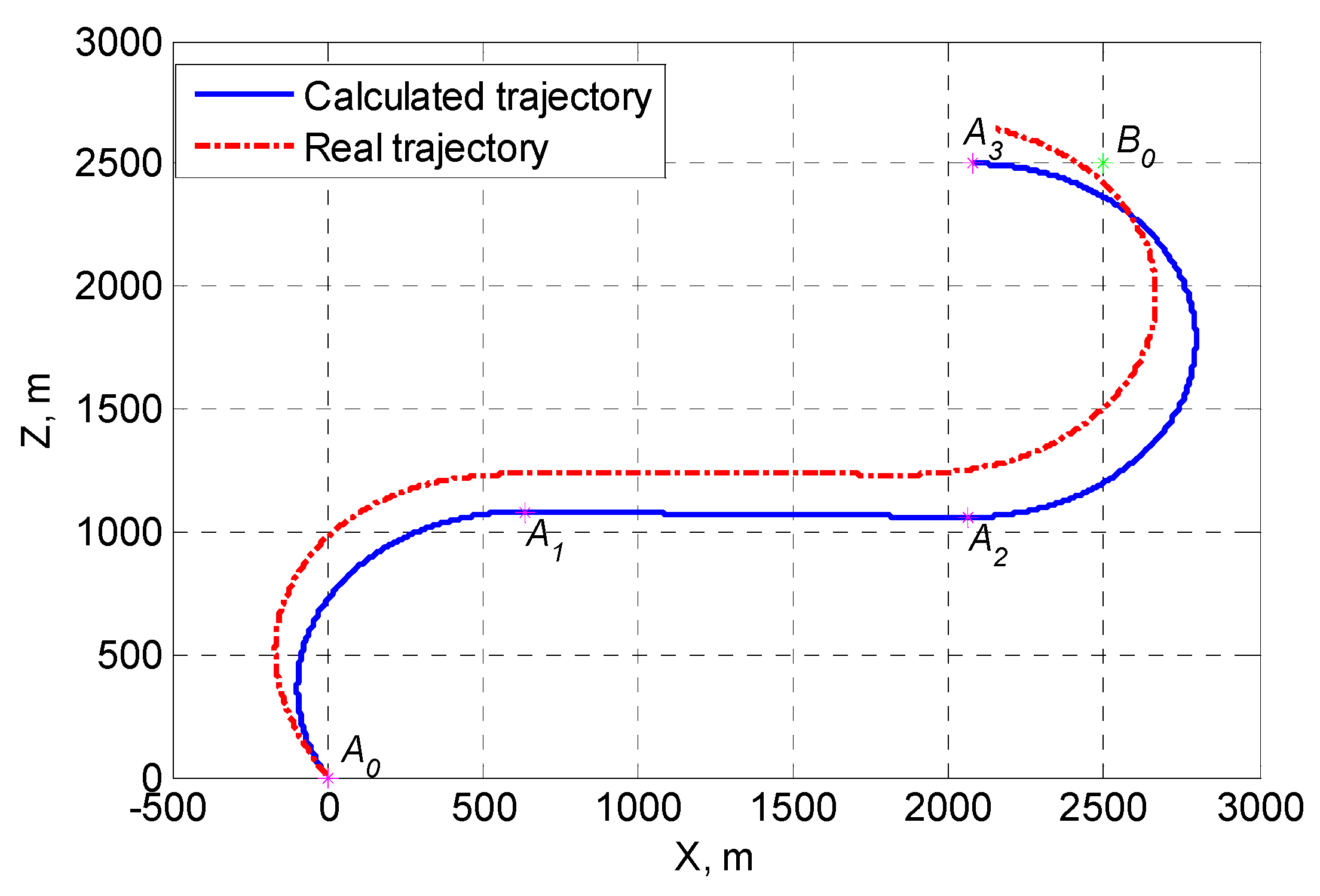 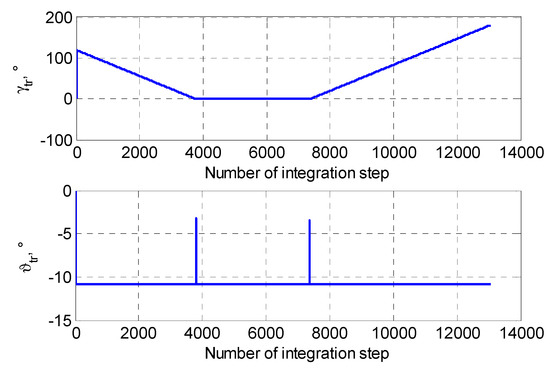 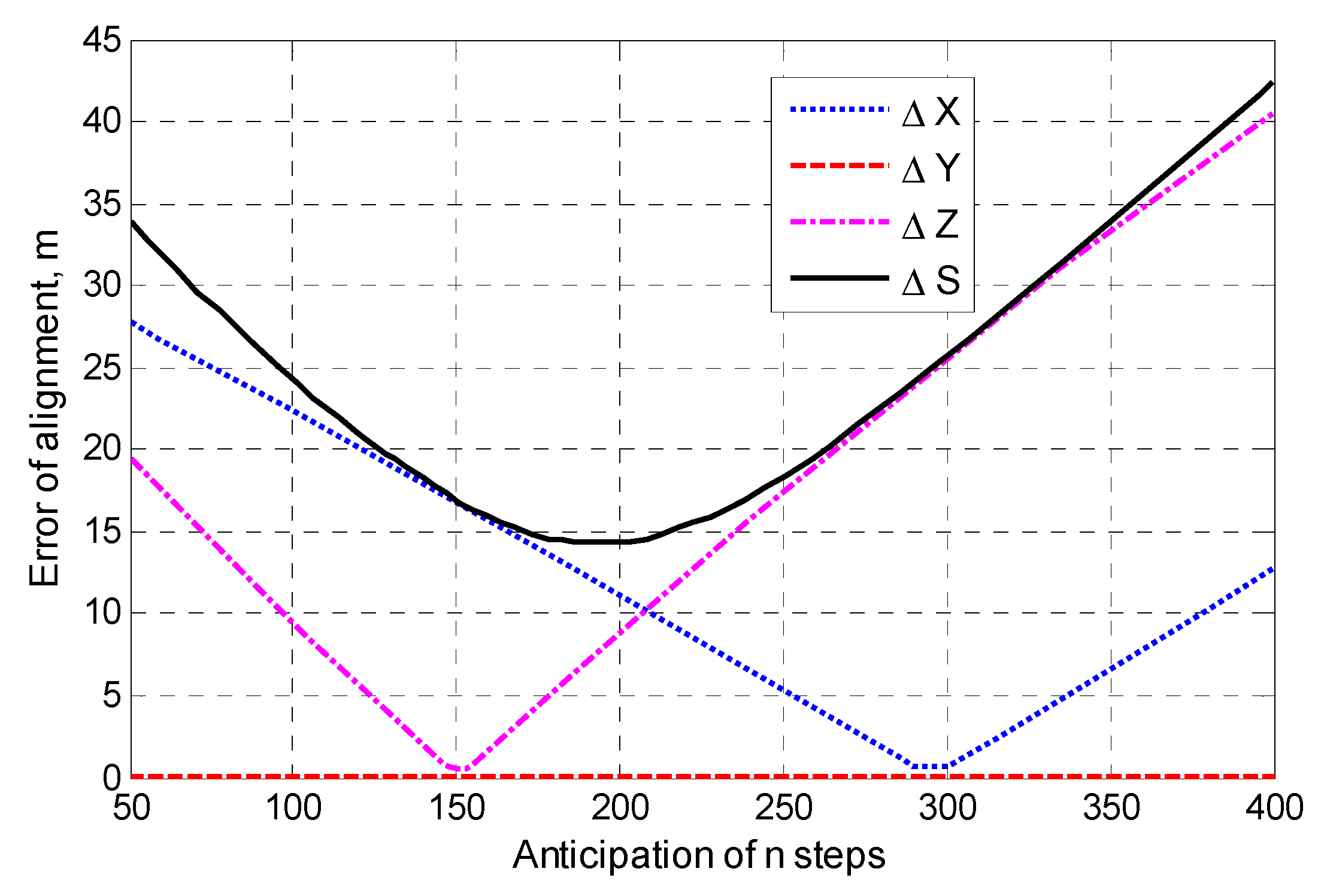 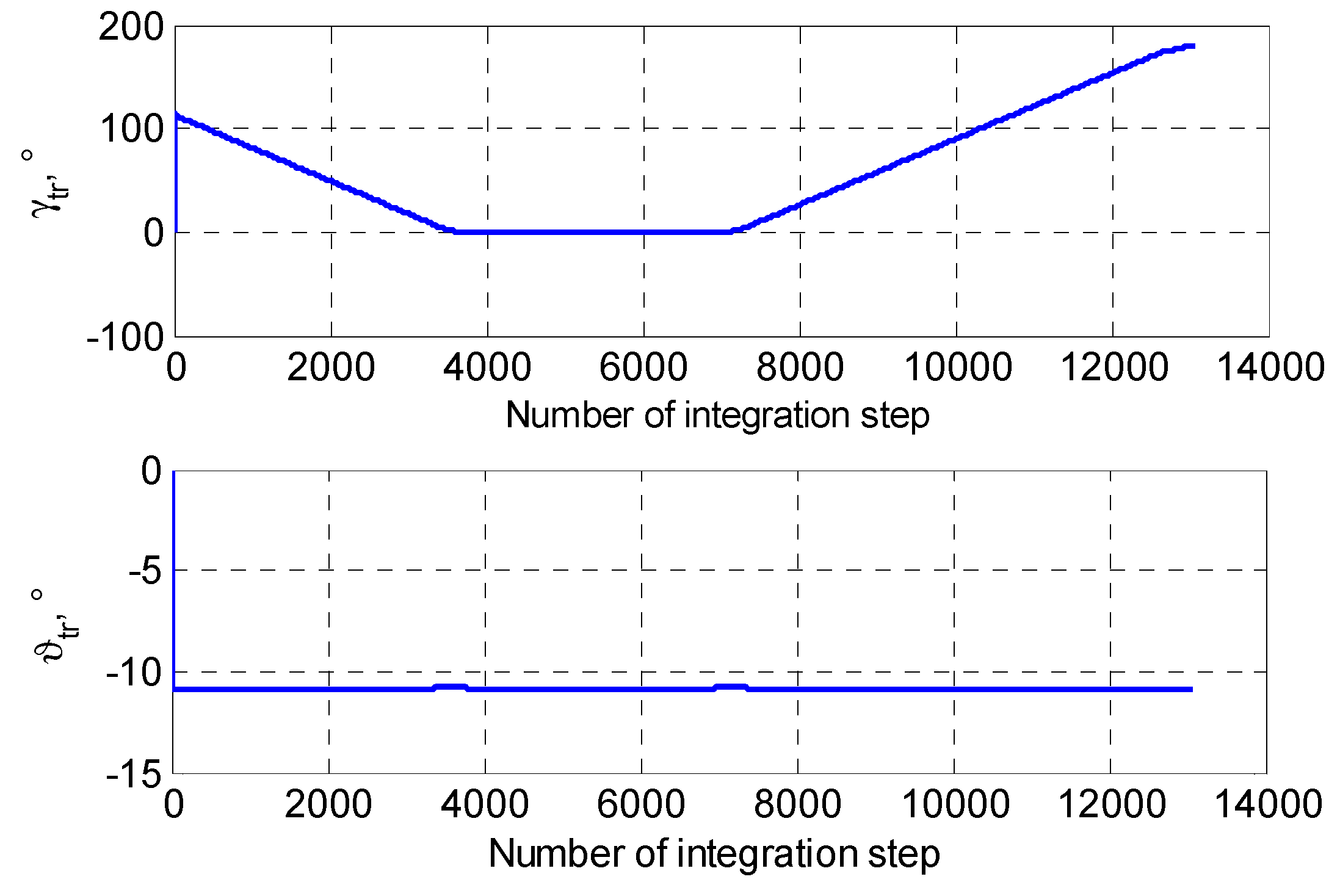