A novel polymeric acid catalyst immobilized on a membrane substrate was found to possess superior catalytic activity and selectivity for biomass hydrolysis. The catalyst consists of two polymer chains, a poly(styrene sulfonic acid) (PSSA) polymer chain for catalyzing carbohydrate substrate, and a neighboring poly(vinyl imidazolium chloride) ionic liquid (PIL) polymer chain for promoting the solvation of the PSSA chain to enhance the catalytic activity. In order to elucidate the mechanism and determine the energetics of biomass catalytic processing using this unique catalyst, classical molecular dynamics (MD) coupled with metadynamics (MTD) simulations were conducted to determine the free energy surfaces (FES) of cellulose hydrolysis. The critical role that PIL plays in the catalytic conversion is elucidated. The solvation free energy and the interactions between PSSA, PIL, and cellulose chains are found to be significantly affected by the solvent.
Keywords: biomass; polymeric catalyst; molecular dynamics simulations; metadynamics biomass; polymeric catalyst; molecular dynamics simulations; metadynamics

Cellulose is one of the major polymers in the plant cell wall. Deconstruction of cellulosic biomass is a critical step in the production of sugars and biofuels, as an alternative to depleting fossil fuels [1,2,3,4,5,6,7]. In the biochemical platform of biomass conversion, a pretreatment step is required to open up the biomass structures, relocate lignin, or to partially hydrolyze hemicelluloses [8,9,10,11]. Dilute acid pretreatment is one of the leading technologies, among several other approaches [12,13,14]. The disadvantages of the dilute acid pretreatment include the high equipment cost, and the detrimental effect on the environment with regard to acid disposal and recycling. The pretreated lignocellulosic biomass is typically further hydrolyzed to monomeric sugars using an enzyme cocktail [15,16]. However, enzymatic conversion is slow and expensive [17].
Cel48F is a widely used cellulase to catalyze cellulose hydrolysis [18,19]. The mechanism involved in the Cel48F hydrolysis involves two reaction steps. The first step is to break the intermolecular hydrogen bonds formed between cellulose chains, followed by the second step of hydrolyzing the individual cellulose chain to glucose and shorter oligosaccharides. Earlier studies using classical molecular dynamics (MD) simulations have gained insights into the catalytic mechanisms of cellulases such as TmCel12A [20], Cel7A [21], and Cel48F [18,19]. Amino acid residues on cellulases play important roles in adapting their conformations for the entry, breakage, and exit of cellulose chains in the catalytic tunnel, as well as in transferring water molecules into the hydrolysis site for breaking down the glycosidic bond. The microenvironment in the catalytic tunnel inside cellulase is partially dehydrated. Previously, we have performed ab initio molecular dynamics simulations coupled with metadynamics (CPMD-MTD) simulations [22,23,24,25,26,27,28,29,30,31] to elucidate the energetics and mechanisms of acid-catalyzed catalytic conversions, including cellulose hydrolysis, glucose ring opening, glucose dehydration, and isomerization reactions. The barriers of these reactions are found to strongly affect by the solvent. A partially dehydrated environment could potentially reduce the activation barrier and facilitate the hydrolysis reaction.
Inspired by action of cellulase enzymes, a polymeric solid acid catalyst consisting of two adjacent nanostructures was synthesized and immobilized on a porous membrane substrate to mimic the function of cellulase. The poly(styrene sulfonic acid) (PSSA) chain hydrolyzes the β-1,4-glycosidic bonds, whereas the neighboring poly(vinyl imidazolium chloride) ionic liquid (PIL) chain enhances the solvation of the PSSA chain and facilitates the dissolution of cellulose by breaking the intermolecular hydrogen bonds between the neighboring cellulose chains. The schematic interaction between the polymeric acid catalyst and cellulose is shown in Figure 1. The polymeric acid catalyst can operate at higher temperatures than cellulase enzymes, overcoming the limitations of biocatalysts to speed up the reaction rates significantly [32,33]. This designed polymeric acid catalyst was successfully synthesized and studied [34,35,36]. More than 97% total reduction of sugar (TRS) yield was obtained in 1-ethyl-3-methylimidazolium chloride ([EMIM]Cl) solution using cellulose as a substrate at a mild temperature of 130 °C. More recently, the depolymerization of lignocellulosic corn over the biomass was conducted using the optimized polymeric catalyst. Near-quantitative TRS yields were obtained in IL and IL/H2O mixed solvents for dilute acid, base, and stream-pretreated samples obtained from the National Renewable Energy Laboratory [35]. In addition, over 50% glucose yield was obtained for acid-pretreated wheat straw in mixed solvents consisting of ionic liquid and γ-valerolactone (GVL) [36].
To elucidate the mechanism of cellulose hydrolysis using the polymeric catalyst, theoretical calculations were performed in this work to investigate the direct interactions between PSSA, PIL, and cellulose chains using classical MD simulations coupled with metadynamics (MTD) [37,38,39,40] simulations to determine its associated free energy surface (FES). Elucidating the catalytic mechanism will provide an insight and understanding to the biomass hydrolysis process, and it is valuable for developing better catalysts.
MTD simulations have been used extensively in our previous investigations to map out the free energy surfaces [25,27,28,29,30,31] for xylose and glucose condensation reactions, glucose ring opening, glucose-to-hydroxymethylfurfural (HMF) dehydration, and glucose-to-fructose isomerization reactions. It was found that the solvent plays a critical role in all of these reactions, and that the barriers are largely solvent-induced. Here MD-MTD simulations are used to investigate the FES for cellulose hydrolysis in the presence of explicit solvent ([EMIM]Cl and water) molecules.

MD-MTD simulations allow for efficient sampling of free energy surfaces of two interacting molecules without the formation and breakage of a covalent bond in an accelerated time scale of less than one microsecond (µs) by filling the potential wells with repulsive bias potentials [37,38,39,40]. As shown in Figure 2, the bias potential is added to the local minima to facilitate barrier crossing. Once one local minimum is filled close enough to the barrier, the system crosses the barrier and moves to the neighboring minimum. When all the local minima are filled, the FES becomes flat and the system can move back and forth without any barrier. The FES is subsequently reconstructed based on the amount of bias potentials added. This method assumes that several collective variables (CVs) can be used to describe the process, distinguishing different states of the interacting system. Many variables including the number of hydrogen bonds formed, the coordination number, bond distance, bond angle, and dihedral angles, can be used as CVs. To describe the interacting system consisting of one polymer chain from the catalyst and one cellulose substrate accurately, the number of formed hydrogen bonds between the polymer chain and cellulose substrate was used as the CV, as shown in Equation (1). Because the catalytic polymer chain can be both the donor and the acceptor of a hydrogen bond, two CVs were used. One CV was the hydrogen bonds formed between one polymer chain (donor, group i), and one cellulose chain (acceptor, group j), and the other CV had the opposite setting of the donor and the acceptor. where is the distance between atom i and atom j; is the hydrogen bond cutoff distance. m and n are high-power integers used to determine the formation of hydrogen bond. The values m = 12, n = 6, and = 2.5 Å are typically chosen for calculating the hydrogen bonds.
It is found that polymer chain length plays a critical role in the catalytic activity based on our previous experiment results [34]. MD simulations were conducted for two different chain lengths with degree of polymerization (DP) of 10 and 20 for PSSA, PIL, and cellulose chains. Earlier studies [41,42,43,44] showed that the properties of ionic liquids (ILs) using an OPLS (optimized potentials for liquid simulations) force field from MD simulations agreed well with experimental results. The OPLS force field [45], if available, was used for PSSA and PIL chains for the catalysts. Additional force fields parameters of PSSA, PIL, and [EMIM]Cl were parameterized based on quantum mechanics (QM) calculations using SCAN in Gaussian09 [46]. The monomer units in PSSA and PIL chains were terminated by two methyl groups to mimic the polymeric environment. The scan ranges of bond length, bond angle and dihedrals were 0.2 Å, 10°, and 360° respectively. Geometries for the neutral species were optimized at the MP2/6-31G** level in gas phase. The single point energy was subsequently calculated with the same method and the same basis set for each scanned structure. For PIL and ionized PSSA, the force field parameters were determined at the same level, and the same basis set but with the implicit solvent model. The atomic charges were derived from electrostatic potentials (ESP [47]) calculation using Gaussian09 at the MP2/6-31G** level based on the RESP (restrained ESP) protocol [48,49,50,51]. The force field parameters for [EMIM]Cl were improved based on previous studies [41,44], and it has been validated in our earlier work [52].
The improved sampling MTD simulations were conducted using AMBER [53], coupled with PLUMED1.3 [54] to reconstruct the FESs of interactions between PSSA, PIL, and cellulose chains in aqueous solution as well as in [EMIM]Cl. The initial polymeric structures were constructed by AMBERTOOLS package [55]. The GLYCAM06 [56] force field was used for cellulose. The TIP3P was used for water model [57]. The initial distance between the polymer chains and the simulation cell edge was 10 Å. All simulations were conducted at constant temperatures (300 K in aqueous solution and 353 K in [EMIM]Cl) and pressure (1 bar) under the periodic boundary condition with the Langevin dynamics thermostat [58]. A 10 Å cutoff was used for both the real part of the electrostatic and van der Waals (VdW) interactions. The time step was chosen to be 1 femtosecond (fs). The force field parameters of conuterions Na+, Cl− were from ion08 [59] in AMBER. The criteria for the formation of a hydrogen bond are that the distance between the two heavy atoms A and B is equal to or less than 3.5 Å and that the angle A—H···B is equal to or greater than 130°. As mentioned, a partially dehydrated microenvironment can facilitate the hydrolysis reaction. Solvation-free energies were calculated based on the thermodynamics integration [60] (TI) method for DP 10 and DP 20 polymer chains in [EMIM]Cl and aqueous solutions.

Our MD-MTD simulations clearly demonstrate that the solvent plays a critical role in the cellulose hydrolysis reaction catalyzed by novel enzyme mimic polymeric PSSA/PIL catalysts. The PSSA and cellulose could form stronger hydrogen bonding interactions, thereby disrupting the hydrogen bonding network in the cellulose substrate. Moreover, the [EMIM]Cl solvent strengthens the PSSA/cellulose interaction, making the hydrolysis reaction more effective. The PIL chain in the catalyst plays a vital role in enhancing the catalytic activity of our unique polymer catalyst. The PIL chain has much stronger solvation free energies in both water and [EMIM]Cl solvents, which enhances the solubility of the PSSA chains, as well as the cellulose substrate.

Computations were performed at the High Performance Computing Center (HPCC) at the University of Arkansas. 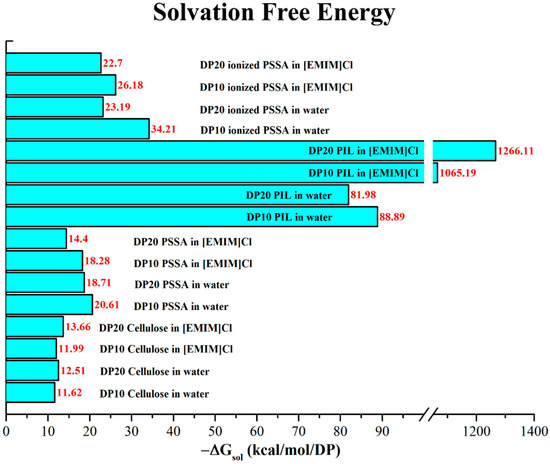 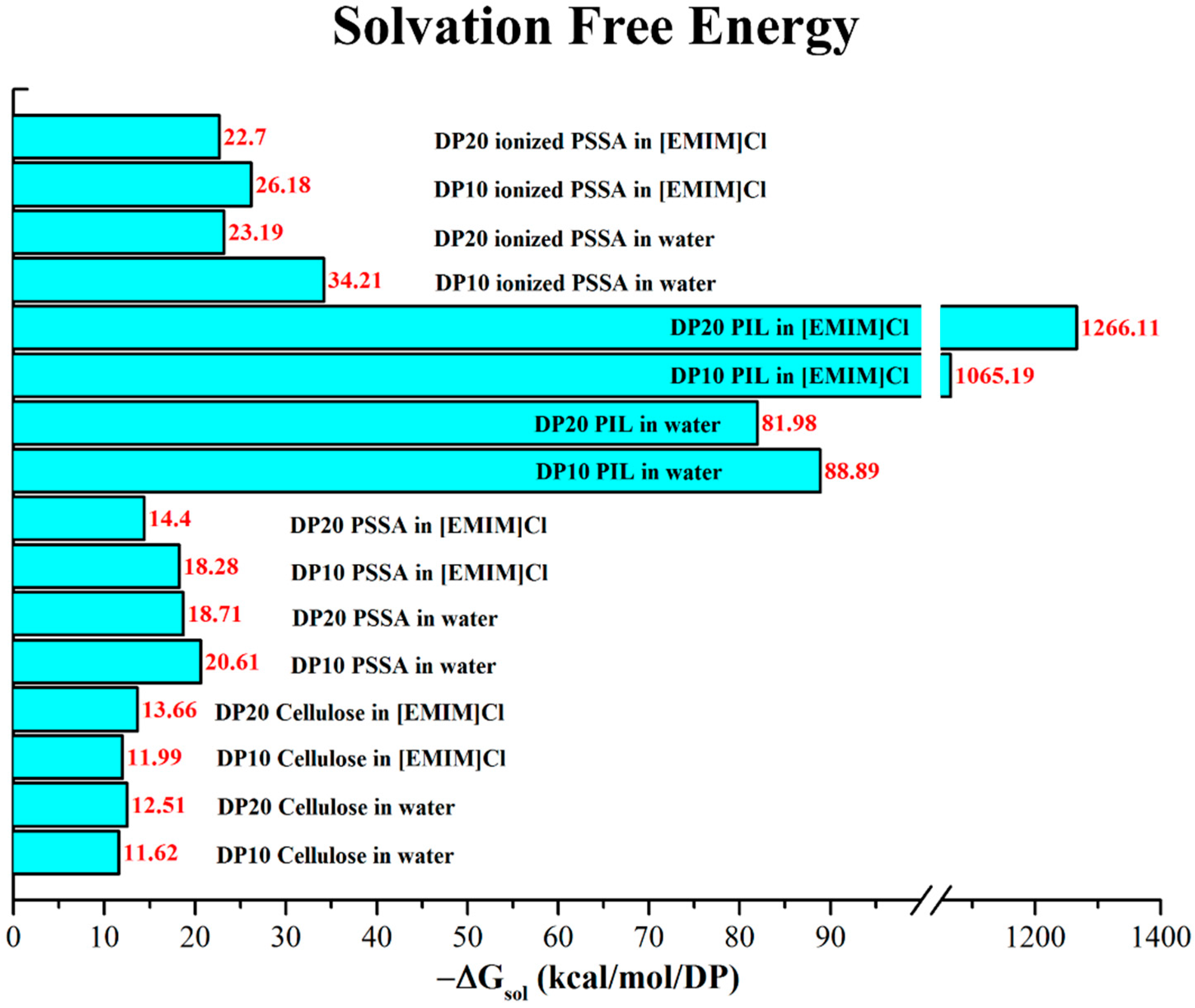 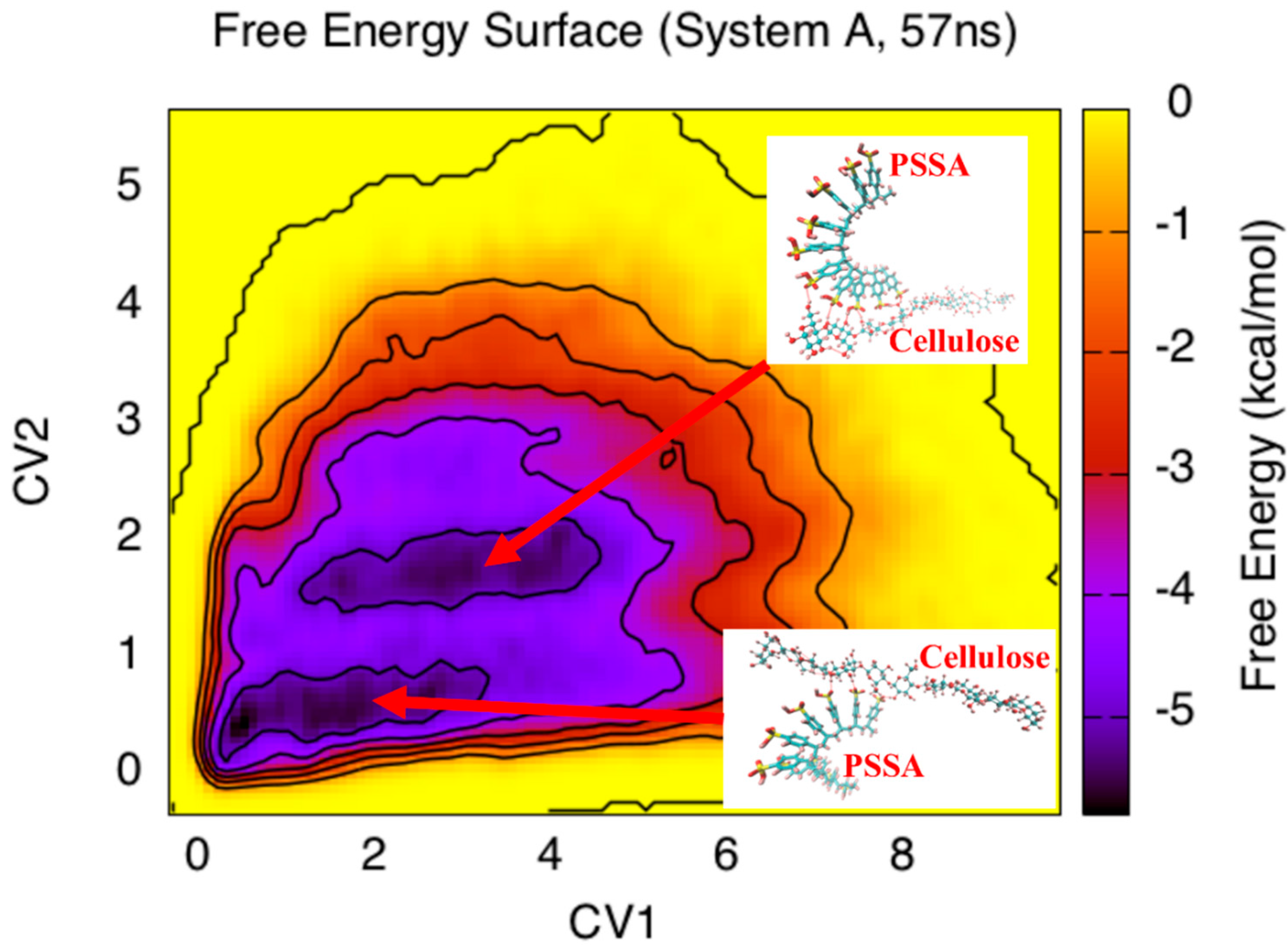 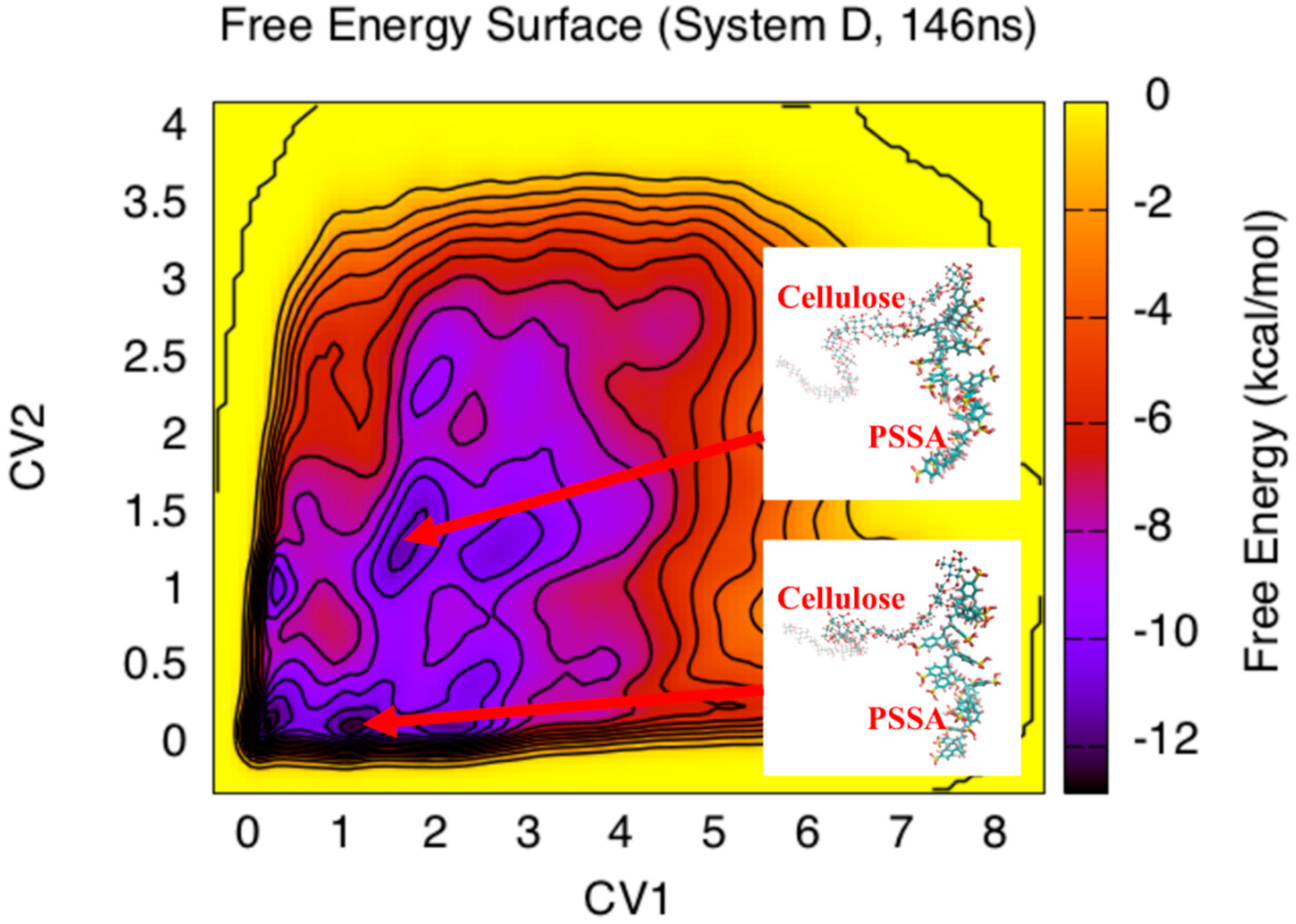 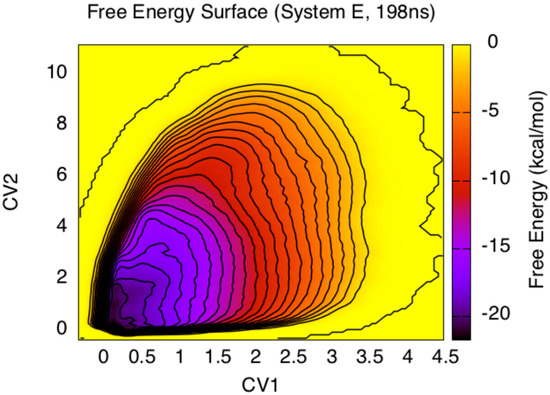 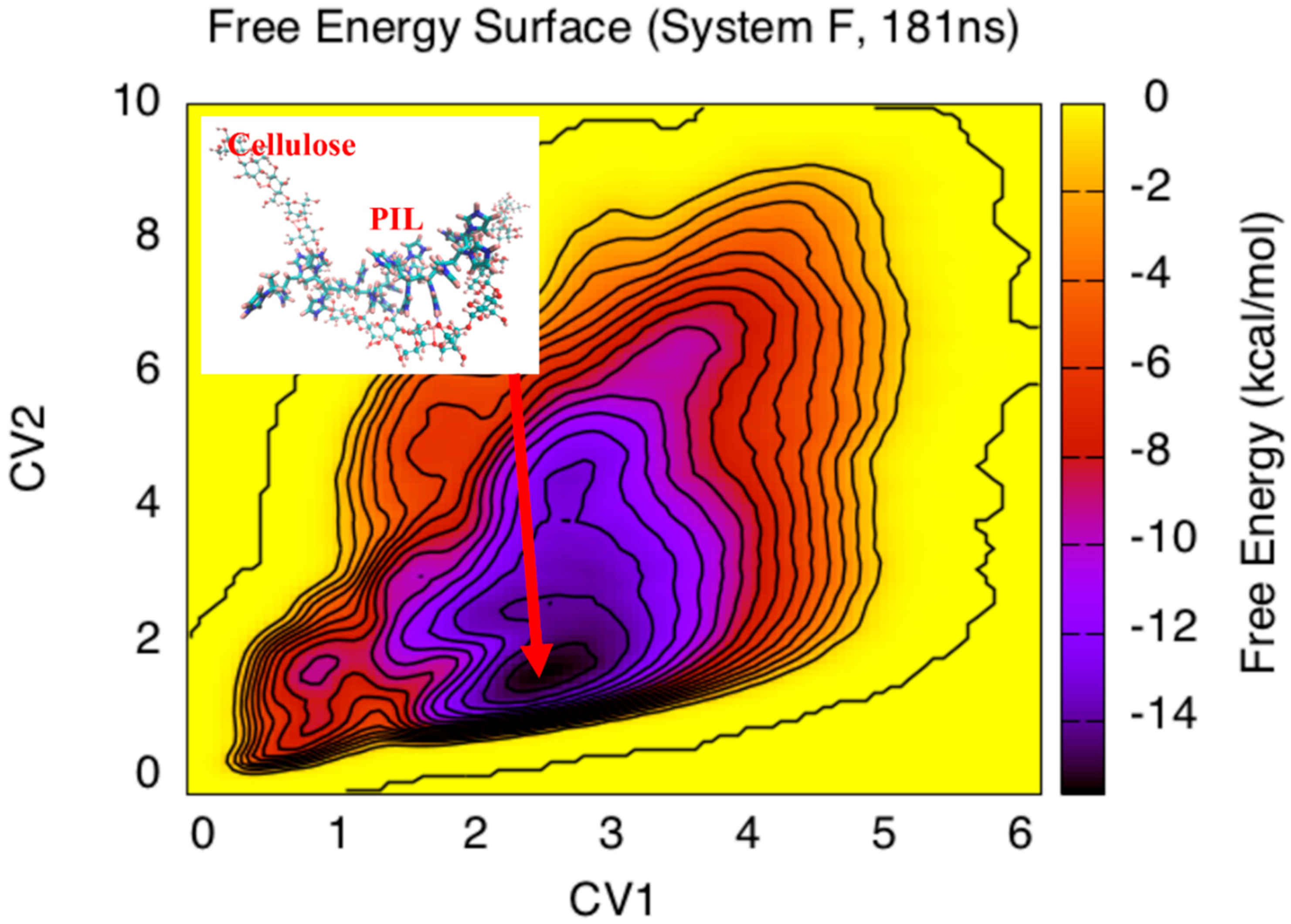