Dementia is the most prevalent degenerative disease in seniors in which progression can be prevented or delayed by early diagnosis. In this study, we proposed a two-layer model inspired by the method used in dementia support centers for the early diagnosis of dementia and using machine learning techniques. Data were collected from patients who received dementia screening from 2008 to 2013 at the Gangbuk-Gu center for dementia in the Republic of Korea. The data consisted of the patient’s gender, age, education, the Mini-Mental State Examination in the Korean version of the CERAD Assessment Packet (MMSE-KC) for dementia screening test, and the Korean version of the Consortium to Establish a Registry for Alzheimer’s Disease (CERAD-K) for the dementia precise test. In the proposed model, MMSE-KC data are initially classified into normal and abnormal. In the second stage, CERAD-K data are used to classify dementia and mild cognitive impairment. The performance of each algorithm is compared with that of Naive Bayes, Bayes Network, Begging, Logistic Regression, Random Forest, Support Vector Machine (SVM) and Multilayer Perceptron (MLP) using Precision, Recall and F-measure. Comparing the F-measure values of normal, mild cognitive impairment (MCI), and dementia, the MLP was the highest in the F-measure values of normal with 0.97, while the SVM appear to be the highest in MCI and dementia with 0.739. Using the proposed early diagnosis model for dementia reduces the time and economic burden and can help simplify the diagnosis method for dementia. View Full-Text
Keywords: early diagnosis of dementia; machine learning; normal; mild cognitive impairment early diagnosis of dementia; machine learning; normal; mild cognitive impairment
►▼ Show Figures 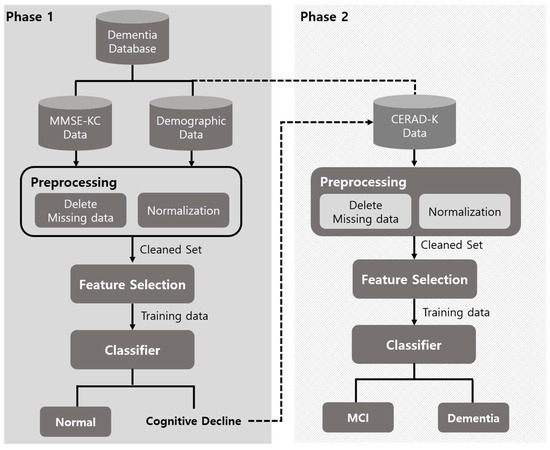