The present study investigates the prediction efficiency of nonlinear system-identification models, in assessing the behavior of a coupled structure-passive vibration controller. Two system-identification models, including Nonlinear AutoRegresive with eXogenous inputs (NARX) and adaptive neuro-fuzzy inference system (ANFIS), are used to model the behavior of an experimentally scaled three-story building incorporated with a tuned mass damper (TMD) subjected to seismic loads. The experimental study is performed to generate the input and output data sets for training and testing the designed models. The parameters of root-mean-squared error, mean absolute error and determination coefficient statistics are used to compare the performance of the aforementioned models. A TMD controller system works efficiently to mitigate the structural vibration. The results revealed that the NARX and ANFIS models could be used to identify the response of a controlled structure. The parameters of both two time-delays of the structure response and the seismic load were proven to be effective tools in identifying the performance of the models. A comparison based on the parametric evaluation of the two methods showed that the NARX model outperforms the ANFIS model in identifying structures response. View Full-Text
Keywords: vibration control; system identification; modeling vibration control; system identification; modeling
►▼ Show Figures 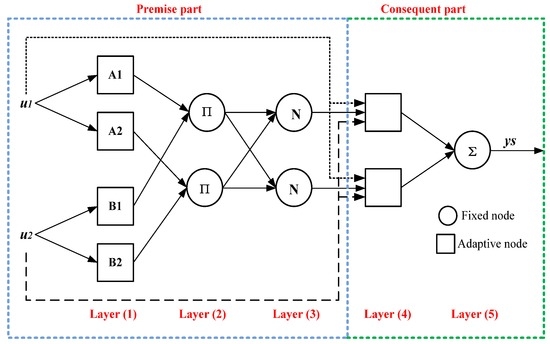