Biofuels impact on global land use has been a controversial yet important topic. Up until recently, there has not been enough biofuels to have caused major land use change, so the evidence from actual global land use data has been scant. However, in the past decade, there have been 72 million hectares added to global crop cover. In this research we take advantage of this new data to calibrate the Global Trade Analysis Project (GTAP) model and parameters. We make two major changes. First, we calibrate the land transformation parameters (called constant elasticity of transformation, CET) to global regions so that the parameters better reflect the actual land cover change that has occurred. Second, we alter the land cover nesting structure. In the old GTAP model, cropland, pasture, and forest were all in the same nest suggesting, everything else being equal, that pasture or forest convert to cropland with equal ease and cost. However, we now take advantage of the fact that pasture converts to cropland at lower cost than forest. The paper provides the theoretical and empirical justification for these two model improvements. Then it re-evaluates the global land use impacts due to the USA ethanol program using the improved model tuned with actual observations. Finally, it shows that compared to the old model, the new model projects: (1) less expansion in global cropland due to ethanol expansion; (2) lower U.S. share in global cropland expansion; (3) and lower forest share in global cropland expansion. View Full-Text
Keywords: general equilibrium; biofuels; land use changes; land transformation elasticity; nesting structure general equilibrium; biofuels; land use changes; land transformation elasticity; nesting structure
►▼ Show Figures 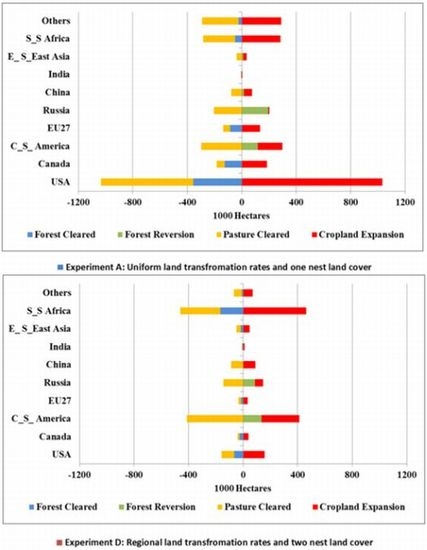