Multiple-scattering represents a fundamental scientific problem, with implications in a wide spectrum of practical applications ranging from biological imaging [1] to dense spray diagnostics [2]. However, multiple-scattering problems usually are complicated and have to be solved numerically, which is computationally costly and often does not provide intuitive understanding of the problem. As an example, Monte Carlo simulation [3,4,5,6], which is an extensively used numerical technique, can be prohibitively expensive when probing large optical depth. Considerable efforts have been investigated to overcome this limitation, and one notable technique demonstrated recently [7] involves the use of GPU (Graphical Processing Units) to parallelize and accelerate Monte Carlo simulations. Alternatively, theoretical approaches have been developed to derive analytical expressions for the observable quantities involved in multiple-scattering [8]. Notable examples include photon diffusion theory [9] and random walk theory (RWT) [10,11]. This report focuses on the RWT approach, which can yield analytical solutions to provide insights not easily obtained with numerical methods such as the Monte Carlo simulations.
In particular, RWT expressions have been derived for such quantities as transmittance, reflectance, and the intensity distributions of transmitted and reflected photons. These expressions not only address the computational limitation of numerical techniques, but also provide physical insights into the underlying phenomena. They have been validated by extensive comparisons against Monte Carlo simulations, and have been found to be useful for a range of practical applications such as the estimation of signal levels and the design of imaging optics. However, RWT analytical expressions are obtained in terms of lattice units and step lengths, and careful attention must be given to their conversion to expressions involving physical units, viz., the absorption and scattering coefficients (μs and μa), and the anisotropy factor, g. Furthermore, it is desirable to quantitatively understand the applicable range of the RWT expressions, and to investigate the feasibility of extending these expressions to anisotropic media.
In the case of isotropic scattering, random walk expressions can be related to real macroscopic variables by equating the RWT lattice unit to the real displacement divided by the rms (root mean square) scattering length (equivalent to dividing the macroscopic scattering coefficient by

), while expressing the total photon path length in terms of the mean distance traveled on each step of the walk. In this communication we consider transmittance through slabs and provide corrections to some previously-derived RWT equations [12] that contain typographical errors. Also, we correct some expressions appearing in the appendix of [12], where a factor of

was overlooked and various conversions were affected. We then derive the transmittance expression for isotropic scattering media without absorption and demonstrate an unusual scaling law for anisotropic scattering that arises by using a mixture of rms step lengths and mean path lengths within the RWT formulation [12].

We first comment on several algebraic errors in the equations published in [12], where Equations (A1) and (A2) express the transmittance and the photon-path length of the transmitted photons, respectively, in terms of the optical properties of an isotropic scattering medium. These equations should have appeared as follows, where the corrections are underscored:

The correctness of these equations was confirmed by comparison against Monte Carlo simulations.
There also are two errors in the previously-published Equations (12b) and (23) [12]. The amended equations are shown below, again with the changes underscored:

Correspondingly, there is a typo in the captions of Figure 2 and Figure 3 in [12], where the parameter

is in error by a factor of

for the results shown in Figure 1.

where Σs and Σa are the scattering and absorption coefficients of the slab, respectively, and d′ is the corrected sample thickness defined as d′ = d+

Σs-1, where d is the physical thickness of the slab. It can be shown that the limit of Equation (A4) when Σa

) was calculated according to

and used in Equation (6), where g is the anisotropy factor of the medium. The data shown in Figure 2 were obtained by simulating the multiple scattering process and recording the transmitted photons using a π/2 acceptance angle. The simulations were conducted for various particle concentrations assuming the following scatterers with various g: micron-sized water droplets in air (g = 0.77), polystyrene particles in water (g = 0.92), and hydrocarbon fuel droplets in air (g = 0.55). Note that the different phase functions can have the same g. We have performed simulations with different phase functions with the same g, and the results indicated that the transmission is less sensitive to the exact profile of the phase function than to g. As can be seen, Equation (6) predicts the transmittance with good accuracy across a wide range of conditions (in terms of OD and type of scatterer). We expect it to be a useful expression in the study of multiple scattering problems, especially in the design of experiments. 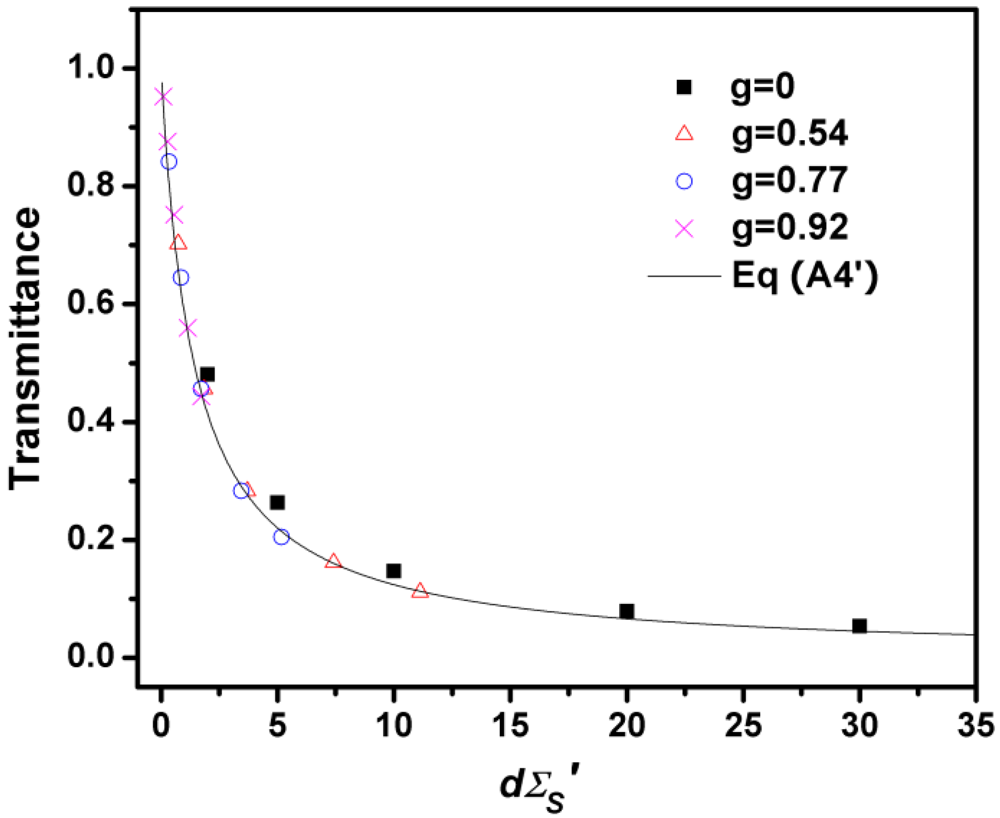 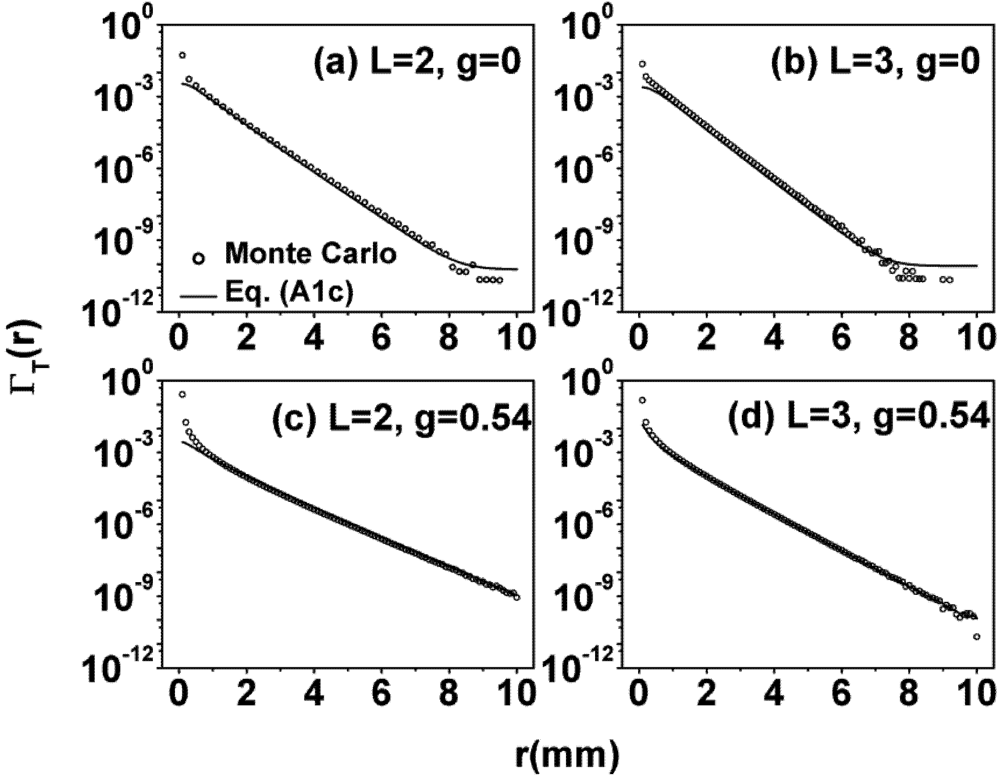 To understand these questions, Monte Carlo simulations were performed to obtain the radial distribution of transmitted photons and representative results were summarized and compared to Equation (1) in Figure 1 and Figure 3. Panel (a) and (b) of Figure 3 show the results obtained for isotropic media, and it can seen that Equation (1) agrees well with the Monte Carlo simulation even for relative small OD (L is defined as OD/

in these figures). For the rest of the results, the scaling law

was applied. As can be seen from Panel (c) and (d) of Figure 3, at intermediate g, Equation (1) also agrees well with the Monte Carlo simulations even at relatively small OD under this scaling law. However, as shown in Figure 1, the discrepancy increases as g increases and decreases as OD increases. At g = 0.77, acceptable agreement begins at L = 7; and at g = 0.92, it begins at L = 30. These trends were observed in all our comparisons with various gs, and it suggested that the applicable range of the RWT can be quantified by an effective OD defined as OD

. The agreement between the RWT and Monte Carlo simulation improves with increasing effective OD.

In summary, this work examined a theory based on random walks to model multiple light scattering. The theory is attractive because it provided close-form solutions to properties of great interest to practical applications. This work corrected some errors published previously, validated the theory by comparison with Monte Carlo simulations, and also quantified the theory applicable ranges. Also, it extends the theory by demonstrating that the theory, combined with a scaling law, can be applied to anisotropic media. These findings are expected to be useful to study multiple scattering and to greatly reduce the computation cost.