The epidermal layer consists mainly of keratinocytes, and only cells in the basal layer divide. Keratinocytes change their morphology and properties through differentiation, and through this differentiation process all organelles disappear to form the corneocytes and stratum corneum. The cornified cell envelope, which covers keratinocytes, binds to intercellular lipids in the stratum corneum to form a tough insoluble membrane that acts as the stratum corneum barrier. In addition, keratinocytes express epidermal differentiation markers such as keratin 5 (K5) and 14, keratin 1 and 10 (K10), involucrin, loricrin, filaggrin, and transglutaminase during the differentiation process [1,2,3,4,5]. Epidermal growth factor, transforming growth factor, and calcium play important roles in regulating keratinocyte differentiation [6,7,8]. Minerals are important components of living organisms. Various minerals are present in living organisms and are essential for life activities and the maintenance of organisms. Minerals are closely related to physiological actions and enzymatic reactions. In epidermal cells, calcium promotes differentiation [8] and regulates hyaluronic acid synthesis [9], magnesium improves barrier functions [10,11], and zinc promotes cell proliferation [12].
In recent years, it has been reported that the application of extracts from natural resources such as hot spring water and deep sea water, which contain several minerals, can improve barrier function and heal and prevent inflammation in atopic dermatitis and psoriasis [11,13,14,15,16]. In this study, we focused on the effects of Shotokuseki extract (SE), which contains various minerals, on epidermal differentiation. SE is an extract from Shotokuseki, a type of sedimentary rock that forms from sediments of once-living organisms such as plankton and marine plants accumulating on the seabed and contains plenty of minerals. Therefore, various minerals are also likely to be present in SE. SE is used as a material for cosmetics, such as a lotions and creams, and it has been used for over 40 years. The effect of SE on the skin and its mechanism have not been investigated.
To examine the effects of SE to the epidermis, keratinocytes were treated with SE, and the expression levels of epidermal differentiation marker genes and proteins were measured.

An individual stock standard solution containing 1 mg/L of Na, Mg, K, Ca, and Zn was prepared with NaCl, Mg(NO3)2·6H2O, KCl, Ca(NO3)2·4H2O, and Zn in pure water or 0.1 mol/L HNO3 and used as calibration standards. A strontium chloride solution was used as a releasing agent for determining Ca. Cesium chloride was added to samples and standards for determination of Na and K as an ionization buffer. The solution was prepared with strontium chloride, cesium chloride, and hydrochloric acid.
The concentrations of minerals in SE were analyzed by atomic absorption spectroscopy (AAS; AA-6200; Shimadzu Corporation, Kyoto, Japan) with the respective hollow cathode lamps (Hamamatsu Photonics K.K., Hamamatsu, Shizuoka, Japan). Experimental conditions and analytical lines recommended by the manufacturer were used.

NHEKs were cultured in HuMedia-KB2 (Kurabo, Osaka, Japan) supplemented with 10 µg/mL insulin, 0.1 ng/mL human epidermal growth factor, 0.5 µg/mL hydrocortisone, 50 µg/mL gentamicin, 50 ng/mL amphotericin B, and 0.4% (v/v) bovine pituitary extract at 37 °C and 5% CO2. NHEKs were fed every 1–2 days and then passaged once they reached 80% confluence. Cells were used at passages 2–5 for experiments.

NHEKs treated with SE as indicated were incubated with MTT for 3 h at 37 °C and lysed in a 0.04 mol/L hydrochloric acid/isopropyl alcohol solution. The absorbance at 570 nm was measured by a spectrophotometer (SpectraMax M2e; Molecular Devices, Sunnyvale, CA, USA).

The trypan blue exclusion test was performed according to the manufacturer’s protocol. NHEKs were pretreated with trypsin and then suspended and stained with an equal volume of trypan blue dye. The cells were counted using a hemocytometer and a light microscope.

Total RNA was isolated from NHEKs using RNAiso Plus according to the manufacturer’s instructions.
mRNAs were reverse transcribed to cDNA with the PrimeScript™ RT Reagent Kit using oligo dT and random primers. The cDNA was used as the template for RT-qPCR in a Step One Plus Real-Time PCR system (Applied Biosystems, Foster city, CA, USA) with TB Green™ Premix ExTaq using the following settings: 40 cycles at 95 °C for 5 s and 60 °C for 30 s. Each expression was normalized to the housekeeping gene glyceraldehyde-3-phosphate dehydrogenase (GAPDH), and the calculation of data was executed by using the ∆∆CT method. The gene-specific forward and reverse primers used were: K5, 5′-GAGCTGAGAAACATGCAGGA-3′ (forward) and 5′-TCTCAGCAGTGGTACGCTTG-3′ (reverse); K10, 5′-CCATCGATGACCTTAAAAATCAG-3′ (forward) and 5′-GCAGAGCTACCTCATTCTCATACTT-3′ (reverse); profilaggrin (proFLG), 5′-CCATCATGGATCTGCGTGG-3′ (forward) and 5′-CACGAGAGGAAGTCTCTGCGT-3′ (reverse); transglutaminase1 (TGase1), 5′-TCTTCAAGAACCCCCTTCCC-3′ (forward) and 5′-TCTGTAACCCAGAGCCTTCGA-3′ (reverse); and GAPDH, 5′-GAAGGTGAAGGTCGGAGT-3′ (forward) and 5′-GAAGATGGTGATGGGATTTC-3′ (reverse).

Changes in intracellular calcium concentration in NHEKs were measured with Calcium kit-Fura-2 according to the manufacturer’s instructions. Briefly, cells were loaded. with 5 μM Fura-2 AM at 37 °C for 60 min. After loading, the cells were rinsed with PBS(-). After replacement with calcium-free HBSS, each sample was loaded. Intracellular calcium concentration was measured by measuring Fura-2-AM fluorescence at 510 nm, using 340/380 nm dual-wavelength excitation in a spectrophotometer (SpectraMax M2e). The interval time of fluorescence recording is 10 sec. Plate temperatures were kept at 37 °C.

3.1. Concentrations of Minerals in Shotokuseki Extract

3.2. Cell Viability and Cell Number of Shotokuseki Extract toward NHEKs

We evaluated the cell viability and cell number of SE toward NHEKs. Cells were treated with SE concentrations ranging from 0 to 10% (v/v) for 24 h, and cell viability was evaluated by the MTT assay. The results show that SE did not affect cytotoxicity up to a dose of 10% (v/v) (Figure 2a). In addition, the number of cells increased in keratinocytes with 1% (v/v) application for four days (Figure 2b).

The gene levels of K10, profilaggrin, and TGase1 were measured by RT-qPCR to assess the effect of SE on epidermal differentiation of NHEKs. We also measured the mRNA expression of the basal epidermal keratinocyte marker K5. The mRNA level of untreated cells (control) was expressed as 1.0 at each time point, and the relative levels of treated cells (1% or 5% (v/v) SE) were reported. Treatment with SE increased the relative expression levels of K10, profilaggrin, and TGase1 genes with maximum increases of 4.4-, 4.3- and 3.1-fold when cells were treated with 5% (v/v) SE, respectively. The expression level of K5, a marker of basal epidermal keratinocytes, increased by a maximum of 2.5-fold when NHEKs were treated with 5% (v/v) SE (Figure 3).
We next examined filaggrin and TGase1 protein expression levels, which are late differentiation markers. The protein levels in NHEKs were assessed by Western blotting analysis relative to the expression level of β-actin in NHEKs. Treatment with SE dose-dependently increased the relative amount of TGase1 with a maximal increase of 2.5-fold observed when NHEKs were treated with 5% (v/v) SE. Application of the same concentration of calcium (0.01 mM) as 5% SE slightly increased TGase1 protein expression, which is involved in epidermal final differentiation, and its expression was upregulated more than that in 5% SE. In contrast, the filaggrin protein level was downregulated 0.7-fold when NHEKs were treated with 5% (v/v) SE (Figure 4).

3.4. Effects of Shotokuseki Extract on Intracellular Calcium Levels in NHEKs

Calcium is important in the process of keratinocyte differentiation. Here, we investigated the intracellular concentration of calcium. In SE-treated cells, there was an initial rapid and transient increase in intracellular calcium concentration compared with Control, 0.01, and 1.5 mol/L CaCl2 (Figure 5a). The maximum value was observed 20 sec after the addition of SE, which was 1.5-fold significantly higher than that of the Control group and 0.01 mol/L CaCl2-treated groups (Figure 5b).

The authors declare that they have no conflicts of interest with the contents of this article. 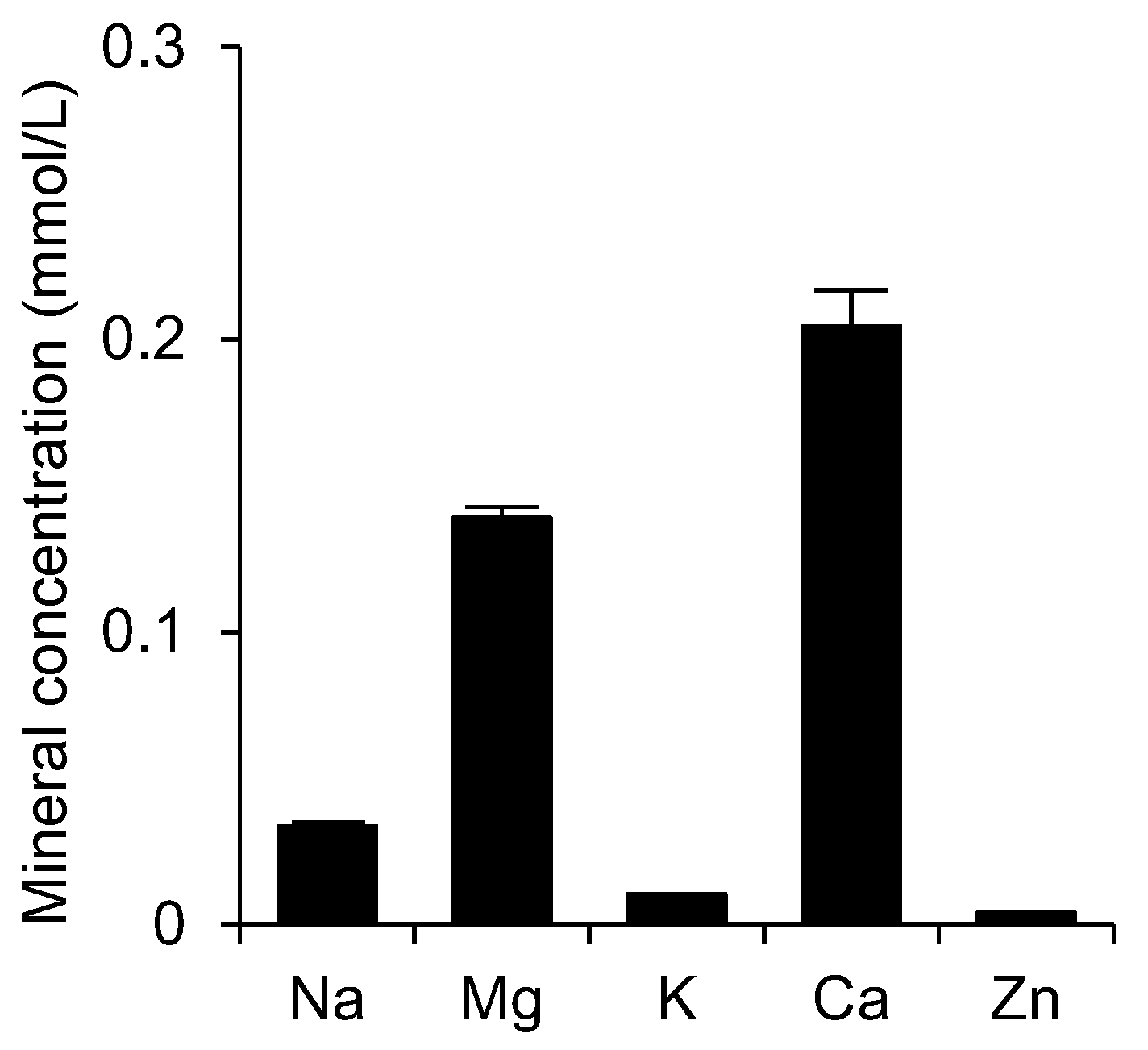 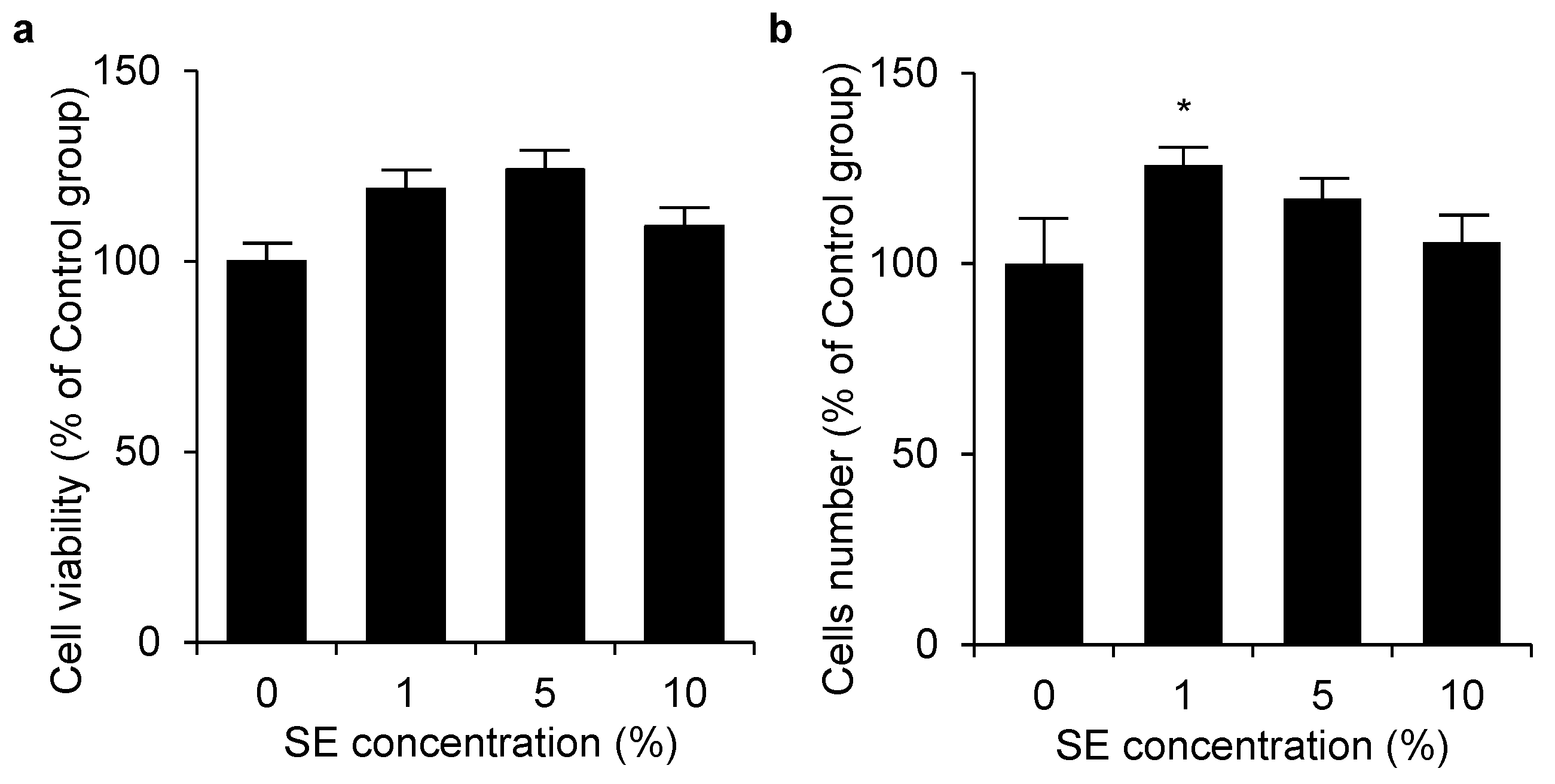 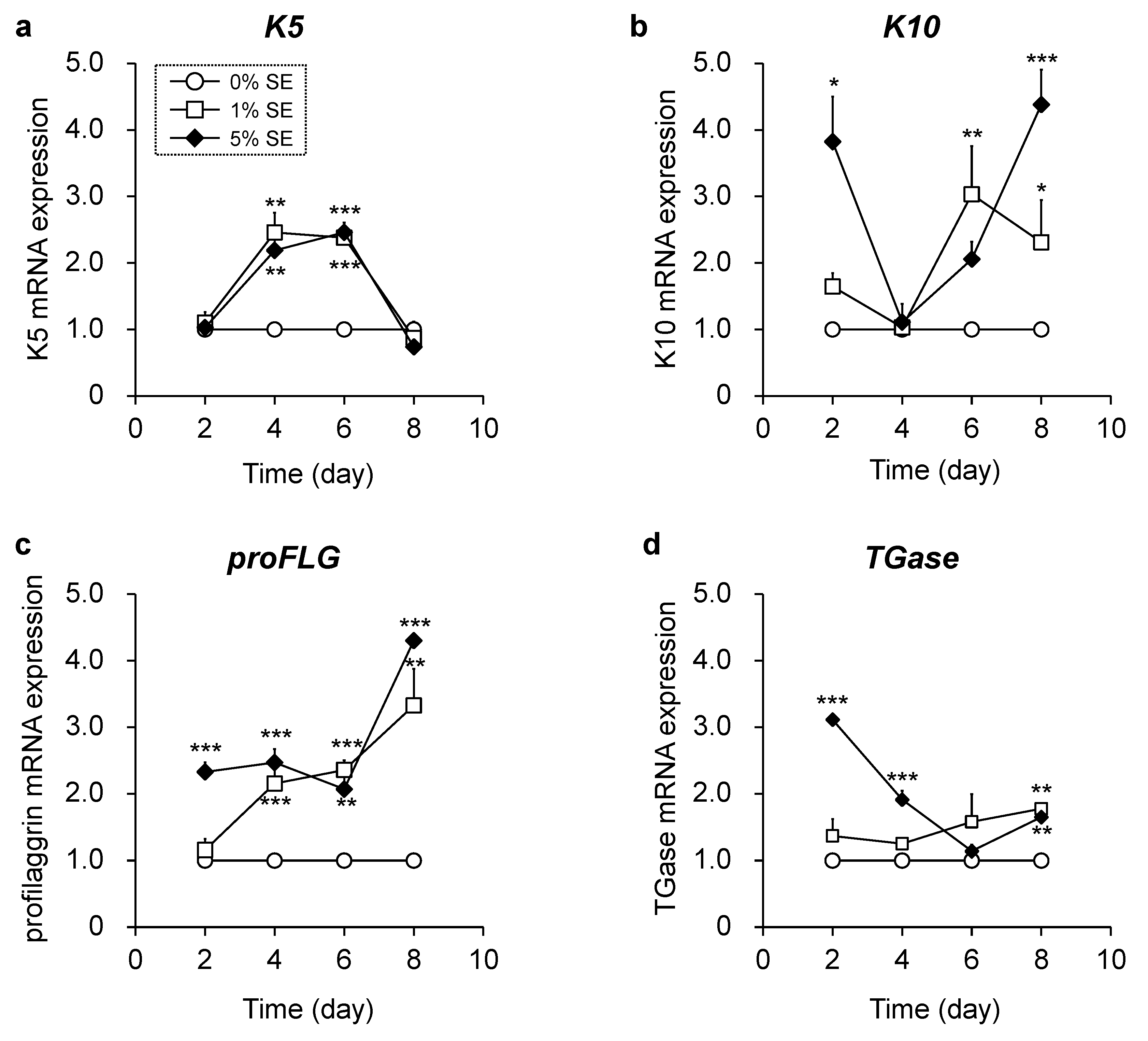