Although anthropogenic mercury (Hg) releases to the environment have been substantially lowered in the United States and Canada since 1990, concerns remain for contamination in fish from remote lakes and rivers where atmospheric deposition is the predominant source of mercury. How have aquatic ecosystems responded? We report on one of the longest known multimedia data sets for mercury in atmospheric deposition: aqueous total mercury (THgaq), methylmercury (MeHgaq), and sulfate from epilimnetic lake-water samples from four lakes in Voyageurs National Park (VNP) in northern Minnesota; and total mercury (THg) in aquatic biota from the same lakes from 2001–2018. Wet Hg deposition at two regional Mercury Deposition Network sites (Fernberg and Marcell, Minnesota) decreased by an average of 22 percent from 1998–2018; much of the decreases occurred prior to 2009, with relatively flat trends since 2009. In the four VNP lakes, epilimnetic MeHgaq concentrations declined by an average of 44 percent and THgaq by an average of 27 percent. For the three lakes with long-term biomonitoring, temporal patterns in biotic THg concentrations were similar to patterns in MeHgaq concentrations; however, biotic THg concentrations declined significantly in only one lake. Epilimnetic MeHgaq may be responding both to a decline in atmospheric Hg deposition as well as a decline in sulfate deposition, which is an important driver of mercury methylation in the environment. Results from this case study suggest that regional- to continental-scale decreases in both mercury and sulfate emissions have benefitted aquatic resources, even in the face of global increases in mercury emissions. View Full-Text
Keywords: mercury; methylmercury; lakes; wet deposition mercury; methylmercury; lakes; wet deposition
►▼ Show Figures 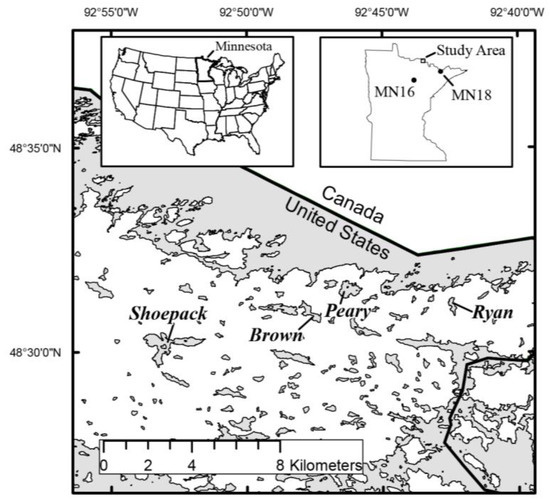