Vector Optical Beam with Controllable Variation of Polarization during Propagation in Free Space: A Review

2. The Principle of Generating Vector Optical Beams with Polarization Varying along a Longitudinal Direction in Free Space

2.1. Construction of Varying Phase Difference in the Longitudinal Direction

With reference to the generation of VOF based on phase modulation, vector beams with varying polarization during propagation in free space can be achieved by constructing a longitudinally varying phase difference between two superposed beams. To achieve this configuration, Bessel beams based on linear phase modulation are commonly used.
An ideal Bessel beam can be described by where Jn is an nth-order Bessel function, kr and kz are the radial and longitudinal components of the wave vector. The wave number , where k⟂ denotes the transverse component of wave vector, including the radial and azimuthal components. Generally, the Bessel beam can be generated with the help of an axicon [39,40,41], or using computer holographic techniques [42,43,44,45], to add a linear phase modulation at the initial optical field. The phase modulation can be described as
This phase modulation leads to a gradual convergence and produces an approximately nondiffracting region of zmax = rmaxk/kr, where rmax is the maximum radius of the phase mask. If l = 0, an approximately zeroth-order Bessel beam is generated at the finite nondiffracting region. As the wave number can be deemed to be a constant, the longitudinal component of the wave vector kz varies with the transverse component. If two orthogonal-polarized Bessel beams, E1 and E2, are generated by the initial phase modulations with different radial wave vectors, a dynamic phase difference will appear during propagation in free space which can be expressed as
Therefore, the vector Bessel beam (VBB) with spatially varying polarization during propagation is generated

2.2. Construction of Varying Amplitude Difference in the Longitudinal Direction

3.1. Modulation on the Complex Amplitude in Real Space

In order to generate the beam whose polarization varies with propagation distance in free space, one approach is to modulate the initial phase distribution. The phase modulation determines the transverse component of the wave vector and will further influence the longitudinal component kz. If two collinear orthogonally polarized optical beams have different kz, a dynamic phase difference as a function of propagation distance will appear, which drives the variation of polarization during propagation. It is found that the initial phase modulation of two collinear polarized beams can be implemented based on the phase masks and the holographic grating.

Phase modulation in real space is the commonly used method to manipulate the polarization distribution both in the transverse and longitudinal directions. However, for the vector optical beam with varying polarization along propagation direction in free space, the initial phase modulation will inevitably influence the intensity distribution of the propagating field. In order to improve the axial intensity distribution of the generated beams with longitudinally varying polarization, Zhao et al. utilized the Sagnac interferometer [19,56,61,62] to construct the superposition of two beams with complementary axial intensities and orthogonal SoPs based on the spatial spectrum optimization approach proposed by Cižmár and Dholakia [47], thereby generating a quasi-Bessel beam with uniform axial intensity but varying polarization upon propagation [46]. The schematic of the theoretical configuration is shown in Figure 8.
A quasi-Bessel beam composed of two orthogonally polarized beams with linearly varying axial intensity, for which the axial fields can be expressed as where a is a constant determining the varying period. With the axial intensities of two polarization components constantly varying, the polarization also changes correspondingly. The results at z = −15, −10, 0, 10, 15 cm are measured respectively, and the ellipticity of the polarization experiences a variation from increase to decrease, thereby the transformation of the polarization of this quasi-Bessel beam continuously moving along the meridian of the Poincaré sphere. More importantly, because of the complementary axial intensity distributions of these two polarization components, the total axial intensity has an approximately uniform profile in the non-diffractive region. Nevertheless, the variation of the ellipticity angle varies with different angles when propagating over the same distance. In order to achieve uniform variation of polarization, another axial envelope is designed as where b denotes the varying period of envelopes. As the phase difference is zero, the quasi-Bessel beam is always linearly polarized. the polarization direction has a relationship with the longitudinal distance as
The distributions of Stokes parameters at z = 0, 1.9, 3.8, 5.6, and 7.5 cm are measured. The results demonstrate the quasi-Bessel beam retains a linear polarization upon propagation that shows a periodic variation of polarization along the equator of the Poincaré sphere.
Recently, a theoretical model to obtain anomalous VBBs with varying polarization order during propagation was demonstrated by Liu et al. [65]. Compared with changing the charge of VOF by dividing the axicon into various radial sectors [49], the method introduced a continuous phase delay by designed spiral slits [66,67] is more flexible such that arbitrary polarization orders, including integers and fractions, can be generated along the propagation axis. This approach was inspired by the idea that a zeroth-order Bessel beam can be thought of as the Fourier transform of an annular slit [68]. The diffraction intensity distributions and phase profiles of anomalous Bessel beams at different propagation distances are shown in Figure 9a. A right-/left-handed circularly polarized plane wave illuminates the spiral slit corresponding to l = 3 and −3, respectively. It can be observed that the topological charge of the anomalous Bessel vortex beam decreases with the propagation distance. When these two beams are collinearly superposed, the generated anomalous VBB is shown in Figure 9b. With the gradual increase of the propagation distance, the polarization order of the anomalous VBB will gradually tend to zero accompanied by the variation of polarization distribution. This characteristic may provide more possibilities and expand the applications in optical trapping, quantum communications, and optical microscopy.

In conclusion, the theoretical foundations and experimental approaches to generate vector beams with longitudinal distribution of polarization in free space have been reviewed. The longitudinal variation of polarization originates from the variable difference between the complex amplitudes of two orthogonally polarized beams with propagation. Thus, there are two theoretical strategies to achieve this special vector beam, which are constructing the longitudinally varying phase difference and amplitude difference. In experiments, the generation methods can be summarized as the modulation of complex amplitude in real space and the filtering of the spatial spectrum. By tailoring the spatial phase distribution in the initial plane, a z-dependent phase difference between two orthogonally polarized beams can be achieved, and the VBB with varying polarization during propagation can be generated based on modulation in real space. In addition, based on spatial spectrum engineering, the axial intensity of two orthogonal polarization components can be modulated to realize the Bessel beam with uniform axial intensity and longitudinally varying polarization. The successful generation of vector beams with controllable variation of polarization along the propagation direction in free space enriches the structured light with a new degree of freedom and will open new paths in light’s interaction with matter. The customization of the longitudinal distribution of polarization and corresponding optimized generation methods with high efficiency and flexibility are anticipated to be achieved by further applied research into this special beam.

The authors all contributed to the preparation of the paper. All authors have read and agreed to the published version of the manuscript. 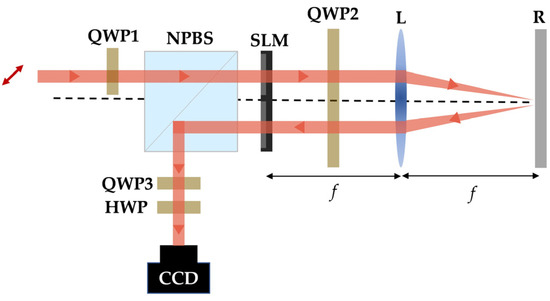 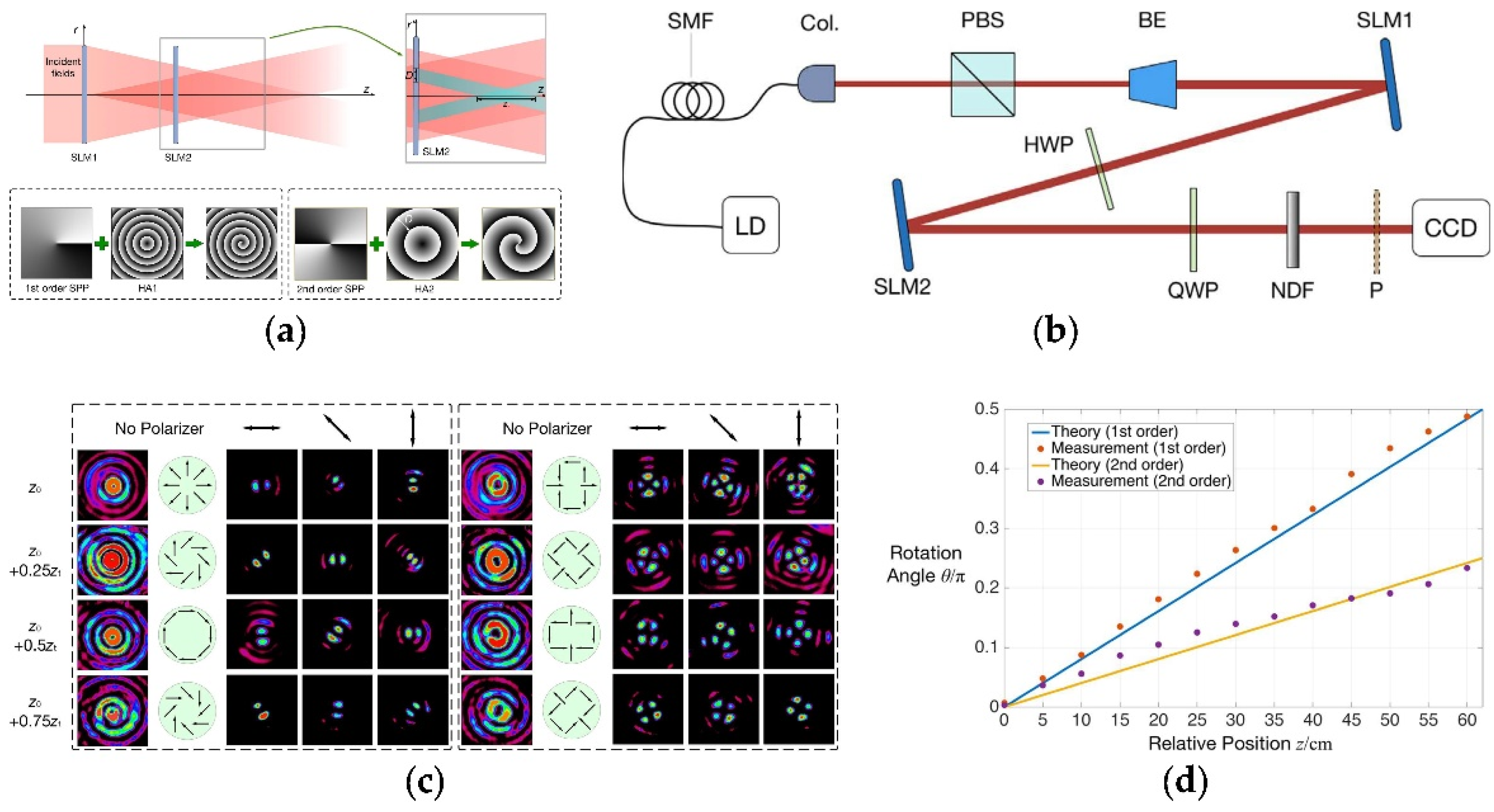