Prophet forecasting model incorporates data trends, seasonality, and holidays that allow the possibility of modeling complicated time-series features. Multiple seasonality can be fitted as daily, weekly, and yearly patterns. The mathematical representation of the decomposed time series model is hence described as: where g(t) represents the data trend function, s(t) represents the seasonality, and h(t) represents holidays effect that can be added within specific points of the data. The error term, εt, represents any distinctive features of the data that are not fitted by the model.
Prophet trend function, g(t), can be represented by a piecewise linear growth model or a saturating growth model. Since the maximum load data do not exhibit a saturating growth, a piecewise linear growth model is utilized as: where is the growth rate, is adjustment rate, is the offset parameter, and represents the trend changepoints, , and is set as , with defined as:
The change points allow the growth model to change the trend and can be utilized by the analyst-in-the-loop to fit the model better and produce reliable data forecasts. The Prophet model allows the user to specify the flexibility of the trend by the adjustment rate. It can also automatically detect the change points, or the data analyst can manually adjust them to describe trend-altering events in the time series.
For the seasonality function, , the time series’ multiperiod seasonality can be modeled using the Fourier series to represent the daily, weekly, and yearly seasonality. The seasonality function is hence written as: with P = 354.25 for yearly seasonality or P=7 for weekly seasonality. Lastly, to include holiday effects by the holiday function, , the user can define a matrix list of holidays with dates to be incorporated into the time series as a matrix of regressors, Z(t), defined as: with D as the set of holiday dates, with as the holiday smoothing parameter.

In order to validate the performance of the prediction of the models, a simulated historical forecast (SMH) approach is conducted. SMH is based on the rolling origin cross-validation approach, or otherwise known as forward chaining, where the data are split into training and testing sets and each day is tested based on the prior training data. However, this method would be computationally intensive due to conducting tests each day and would result in more forecasts that are likely to have correlated estimates of errors. While with SMH, fewer forecasts can be defined at cut-off dates and the total error can be evaluated based on all the forecast horizons. Figure 3 illustrates the process of the rolling origin cross-validation. This approach would allow the models to train on a dataset and test on another unseen dataset of the time series. Moreover, the SMH approach could be used as an indicator of the models’ generalizability in forecasting the maximum load.
In addition, to assess the performance of each model in terms of accuracy, various statistical metrics were adopted, such as root mean square error (RMSE), the mean absolute percentage error (MAPE), coefficient of determination (R2), mean absolute error (MAE), and coefficient of variation of root mean square error (CVRMSE) that can be expressed as in the following equations: where and represent the measured, predicted, and averaged values respectively.

The Prophet and Holt–Winters models are implemented in R and Python, using real data of electrical daily peak load from Kuwaiti powerplants from 2010 to 2020. The two models’ outputs are plotted in Figure 4 and Figure 5, along with the real electrical peak of daily loads. The data include Kuwait’s peak loads from 2010 to 2020. Moreover, the forecasted from 2020 to 2030, along with a 99% confidence interval, are included. The forecasted region of this period is enlarged and presented in Figure 6, along with the 99% confidence interval for both models.
The graphs in the previous figures demonstrate that there has been a steady increase in the values of daily peak loads with a yearly seasonality for both models. The two models share several key features, such as trend similarity of the forecasted maximum and minimum peaks. However, the Holt–Winters model generally shows a higher magnitude of the forecasted maximum and minimum peaks than the Prophet model. The superiority of the models is assessed from different aspects by three indicators: accuracy, generalization, and robustness. Also, the future peak loads forecasting for Kuwait is discussed, and the maximum capacity needed by 2030 is investigated.

According to the assessment of the two models, the Prophet model outperforms the Holt–Winters model and, therefore, should provide more reliable forecasting. The real data of daily peak loads consumption from 2010 to the end of May 2020 are used to forecast the daily peak load from June 2020 to 31-12-2030, with results plotted in Figure 4 and Figure 5. The forecasting plots also provide essential information about the yearly maximum peak demand. Estimating the maximum peak demand is crucial for long-term strategic decisions in terms of electricity capacity expansion plans to withstand the foreseen maximum loads. Soares et al. [40] reported that the electric peak demand is expected to reach 30,000 MW by 2030. Al-Hamad and Qamber [30] applied the Adaptive Neuro-Fuzzy Inference System (ANFIS) and Multiple Linear Regression (MLR) methods to forecast the peak loads for Kuwait in three scenarios according to the expected growth rates of the gross domestic product (GDP) for the years 2014–2024. The three sceneries were associated with high, average, and low growth of GDP. The high, average, and low growth of GDP models were increasing in different rates reaching maximum forecasted loads of 18,700, 27,300, and 44,500 MW, respectively, for the year 2024. Alhajeri et al. [41] showed that the expected demand in Kuwait is increasing by an average of 2.8% annually by 2030, and the installed capacity should be higher than 21.8 GW. Past studies [30,40,41,42,43] about the maximum peak loads forecasting showed a clear increasing trend for peak loads in the coming years, reaching about 30 GW by 2030. On the other hand, the recent study and the new forecast of MEW show a similar trend but lower in magnitude.
The long-term forecasting provides daily, monthly, and annual maximum peaks. Table 3 presents a comparison between actual maximum peak load data and forecasted demand from the MEW in different years (2017–2019) [42,43,44], Prophet, and Holt–Winters models. The MEW forecasting showed variations in the percentage increase in annual maximum load from 2017 to 2019 with a decreasing trend. In the year 2017, there was a yearly increase in the maximum peak load by an average of 5.4%. The average increase was reduced in the forecast for 2018 to reach 4.7% annually. However, the growth became more conservative in the statistical book of the year 2019 and reached 1% only. The forecasting for years between 2020 and 2030 by the Prophet and Holt–Winters models showed an increasing trend with varying percentages for each year, reaching a maximum peak load of 18,550 and 19,588 MW by the year 2030, respectively. The magnitude of the increase in the Prophet model is between the value of the maximum peaks of MEW in the year 2019 and the Holt–Winters model that suggests the Prophet model is more reliable when compared with the actual data. It is a common practice to have a capacity reservoir to withstand any sharp increase in the daily consumption of electricity. Accordingly, the 99% confidence interval can be used to be the capacity reservoir. As a result, the capacity reservoir should reach up to 22.1 and 23.3 GW for the Prophet and Holt–Winters models to tolerate any failure or disruption of the electrical system during the maximum peak load time by 2030.
On the other hand, Table 4 presents the monthly forecasted maximum load peaks for 17 months from August 2020 to December 2021. The data provided in Table 4 are essential for monthly planning in the powerplants. It offers a clear vision for the expected maximum consumption of power by proposing the monthly maximum load peaks, which is essential for planning activity in powerplants, such as maintenance scheduling. Optimum planning for the maintenance schedule is vital for unit availability and avoiding any unexpected failures or shutdowns. Preventive maintenance is a cost-effective option that can be implemented when planning is accurate. The monthly maximum load peaks indicate that the best months for scheduling maintenance are from November 2020 until March 2021 for both models. Even with 99% confidence interval, the maximum peaks do not exceed 10,000 MW and 10,500 MW for the Prophet and Holt–Winters models. Additional months can be alternatives, such as October 2020 and April 2021 but with some low risk.

Long-term energy forecasting plays a pivotal role in providing insights for policymakers’ decisions, such as the need to expand the electrical power utilities. In this study, two forecasting models were utilized for long-term maximum electrical load forecasting of Kuwait; the Prophet and Holt–Winters forecasting models. Both models performed outstandingly in three performance metrics: accuracy, generalization, and robustness and provided essential knowledge for planning as follows:
It is believed that the insights concluded from this study would be of assistance to policymakers in estimating the future electricity demands and the strategic development plan of the State of Kuwait in addition to the maintenance schedule. 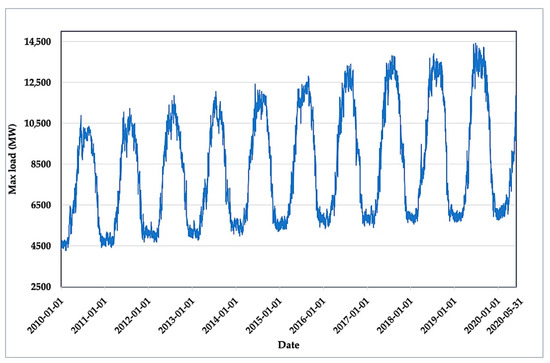 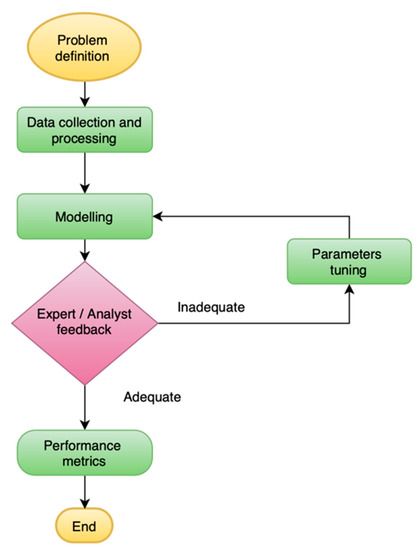 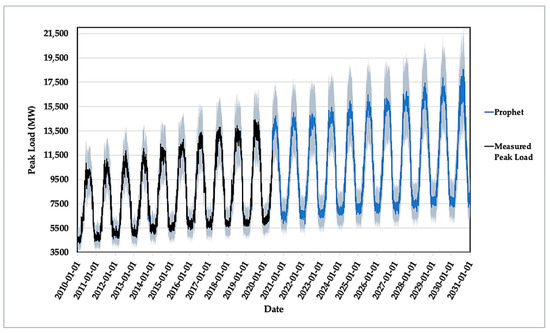 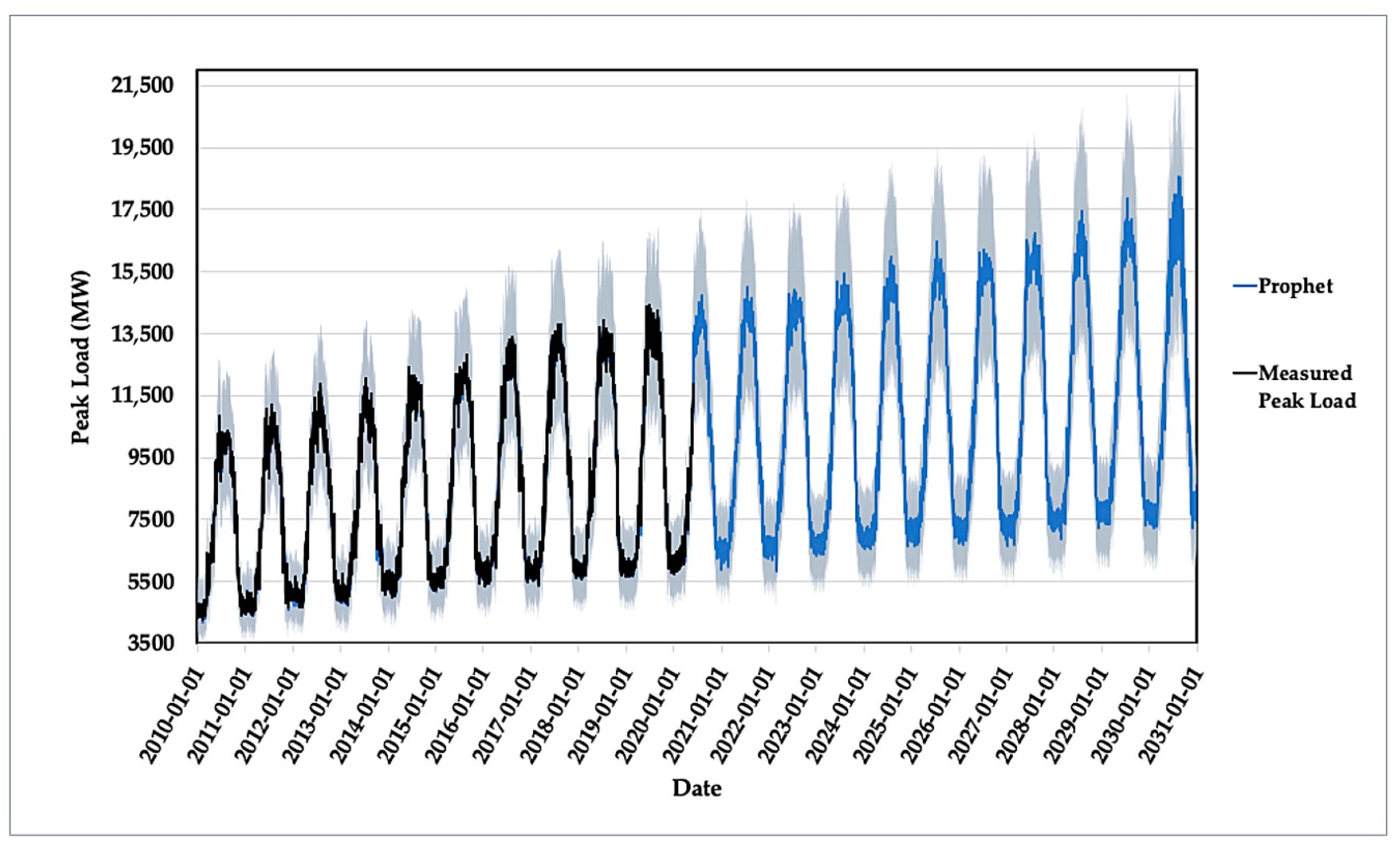 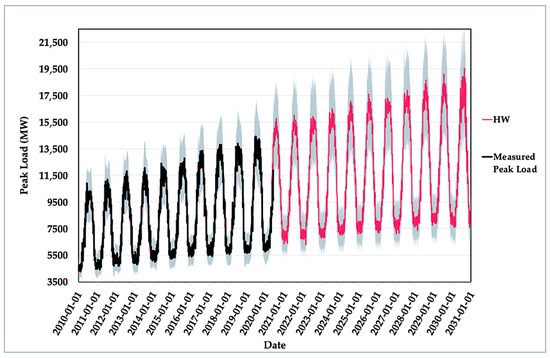 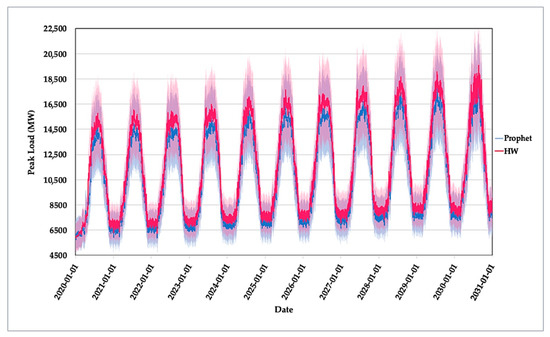 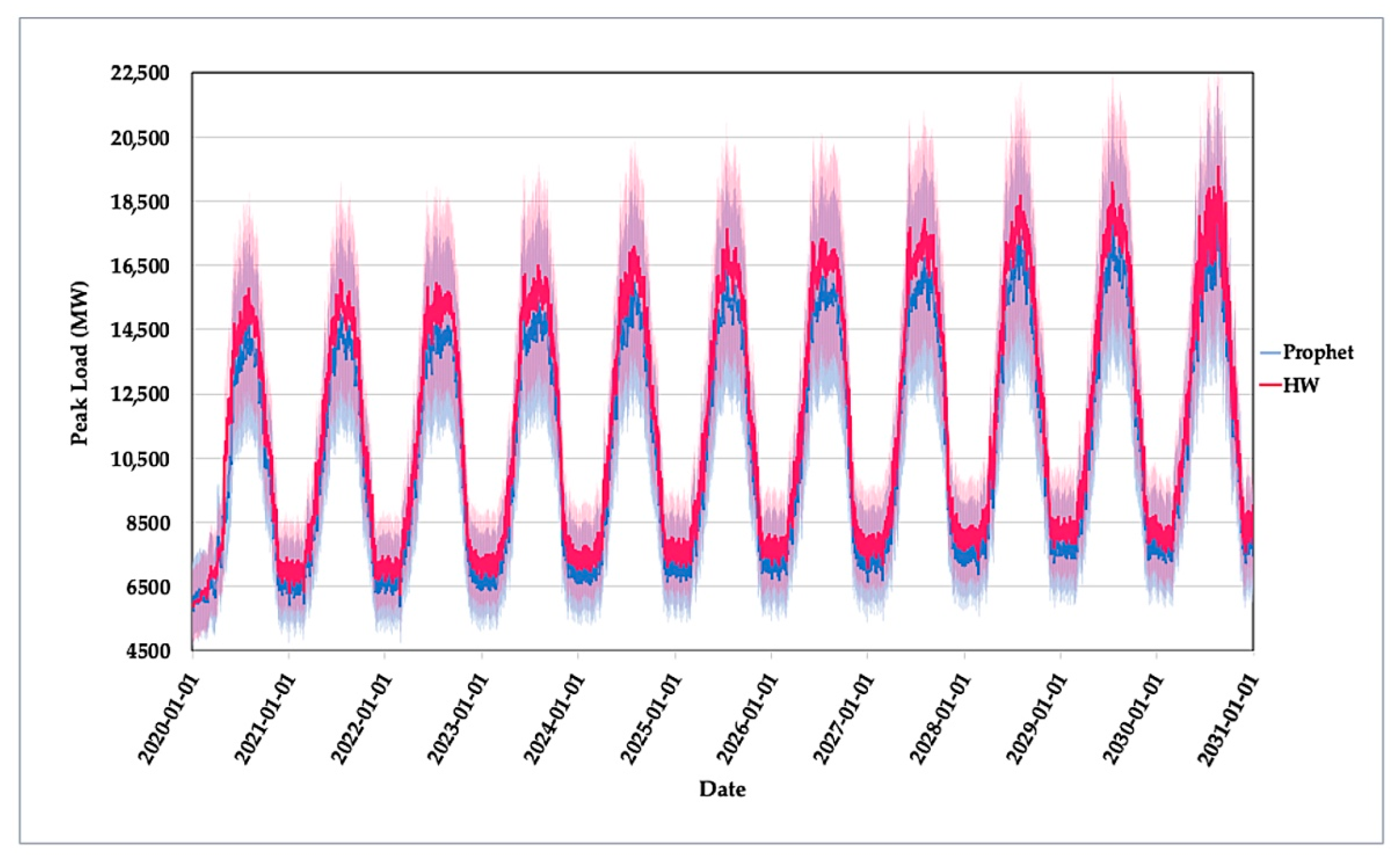 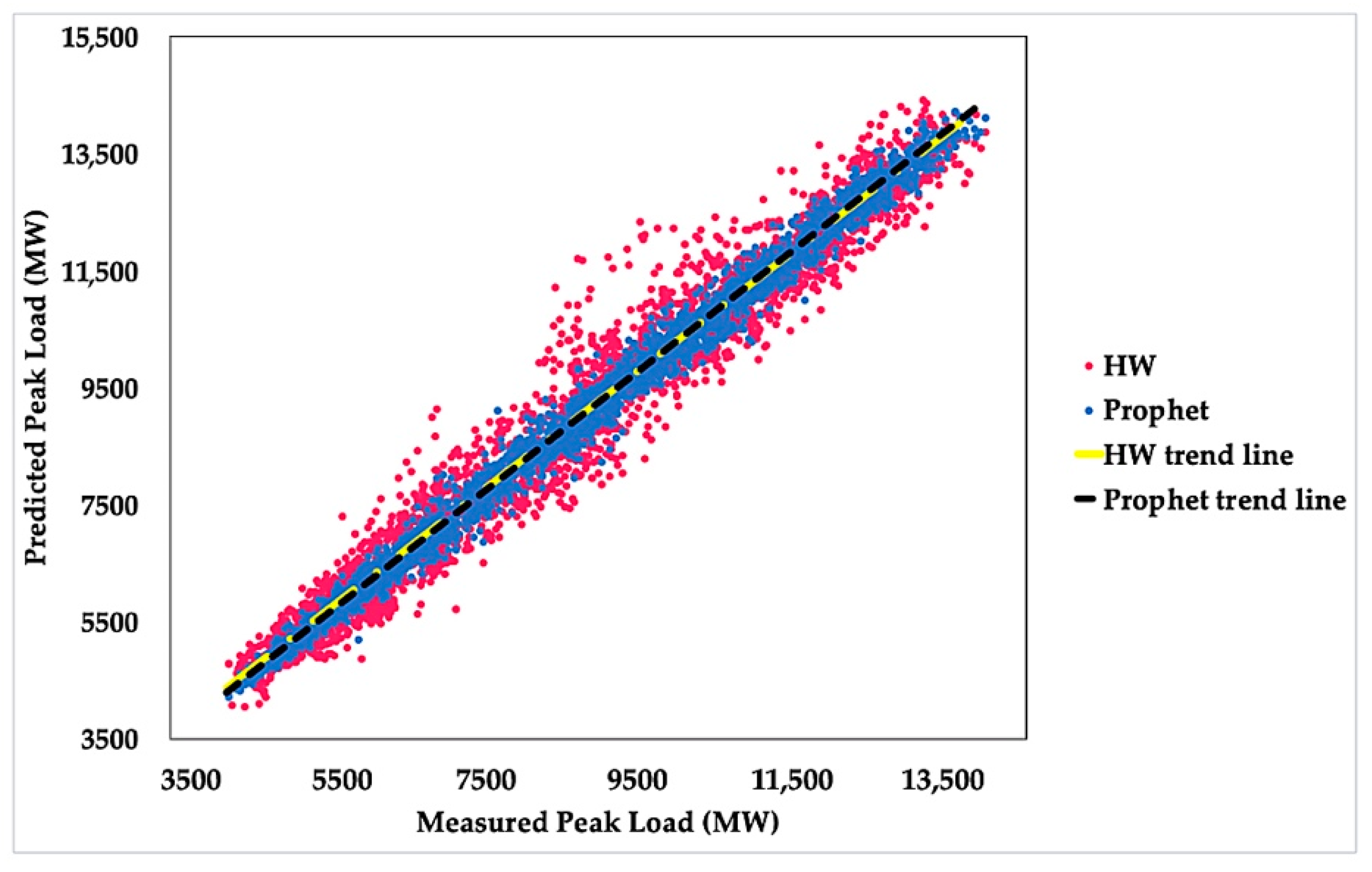 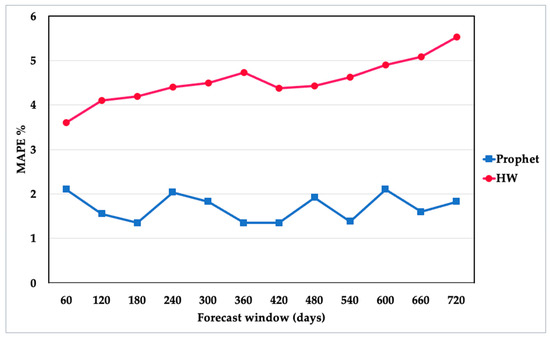 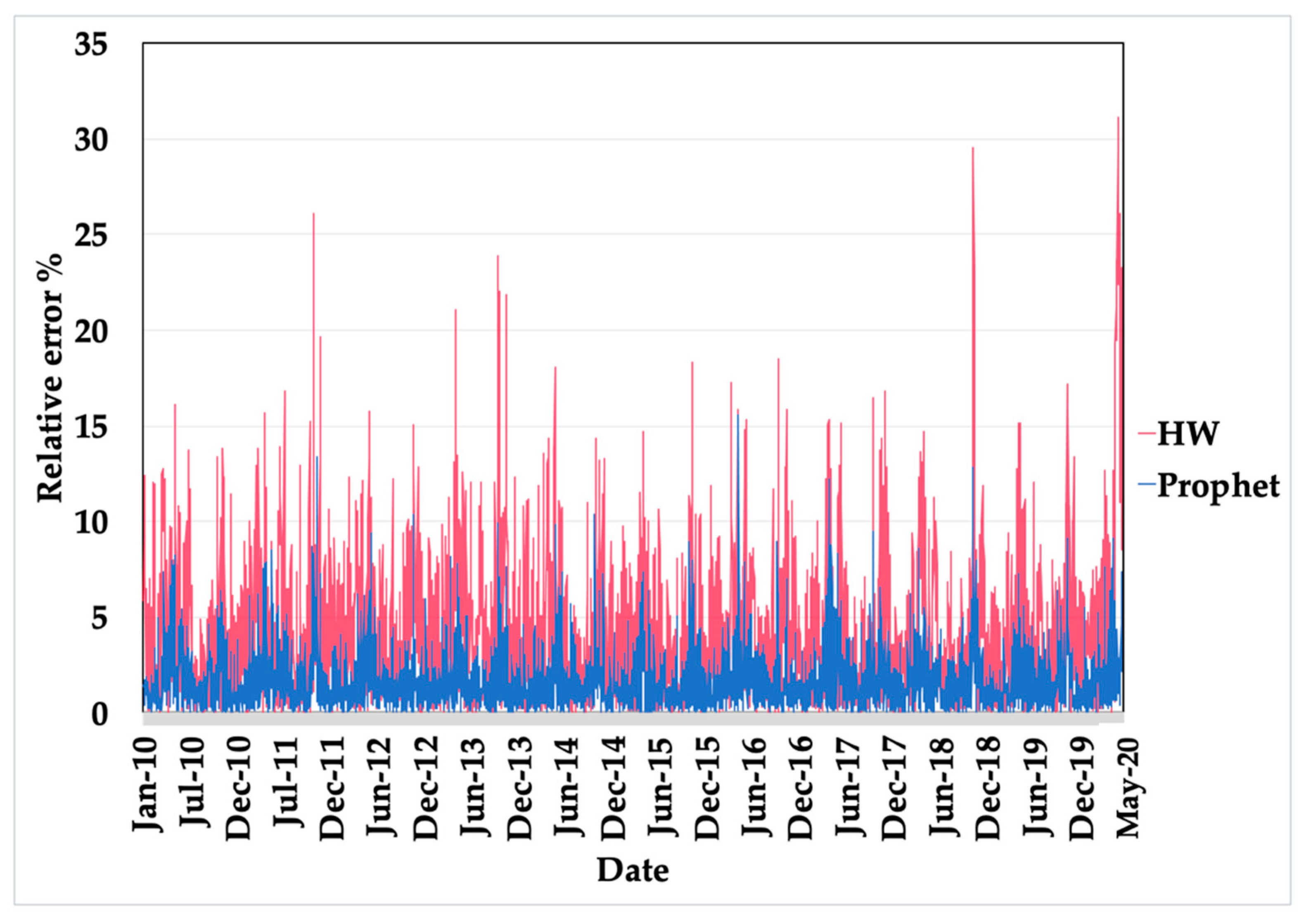 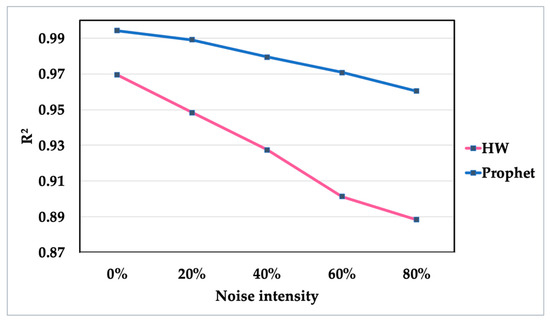