The proposed nonlinear vibration isolation system is mainly composed of the positive stiffness mechanism, the QCRM-NSC, the upper loading platform (2), and the baseplate (6), as shown in Figure 6. The positive stiffness mechanism here consists of four vertical linear springs (5) which are fixed on the corners of the baseplate to carry the rated mass m (1) and ensure the reliability of the vibration isolator. The QCRM-NSC is designed based on the principle described in Section 2 and located in the middle of the isolator. As the important components of the NSC, two grooved cams (3) are symmetrically mounted on the baseplate. After being connected by the horizontal compression linear spring (7), the rollers (4) contacting with the cams are horizontally installed under the upper platform (2) by the hollow tube (8). The pre-compression of the horizontal spring can be adjusted by the nuts (9) at the bottom of the cams. Vertical adjustment nuts (10) are also adopted to eliminate the interference of static load error on the static equilibrium position of the vibration isolator.
Since the positive stiffness mechanism and the NSC are connected in parallel, the sum of their restoring forces is the total restoring force of the entire vibration isolator. When the stiffness of each vertical spring is kv, the force-displacement characteristic can be written as: where Fk is the restoring force provided by the vibration isolator, kp = 4kv is the total stiffness of the positive stiffness mechanism, and Δy = mg/kp.
Dividing both sides of Equation (6) by kpΔy, the non-dimensional restoring force of the isolator can be derived as: where r = kn/kp is the stiffness ratio, and the other non-dimensional parameters have the same definitions with those in Equation (4).
Then, the non-dimensional stiffness is obtained by differentiating Equation (7) with respect to the non-dimensional displacement , as:

The nonlinearity of makes the vibration isolation system possess high-static-low-dynamic stiffness characteristic. Furthermore, it is possible for negative stiffness to completely offset all the positive stiffness, so as to achieve the QZS. Therefore, by setting the Equation (8) to zero at the static equilibrium position, that is, , the required relationship that gives the system QZS characteristic can be obtained as:
With such a configuration, the non-dimensional stiffness of the QZS system is reformulated as:
From the non-dimensional stiffness curves for different and r in Figure 7, it can be found that the QZS is realized under different stiffness characteristics. Increasing the stiffness ratio and the quadratic coefficient can both get a larger range of low dynamic stiffness near the zero-stiffne.

4. Dynamics and Isolation Performance of the Vibration Isolator

Based on Newton’s second law and the structure in Figure 6, the motion equation of the vibration isolation system exposed to the base displacement excitation with amplitude Z and frequency ω is established as: where c is the damping coefficient in the vertical direction.
Considering the QZS condition in Equation (9), the non-dimensional form of Equation (11) is obtained as: where the new non-dimensional transformation parameters are defined as , , , , and .
Here, the harmonic balance method (HBM) [30], an approximate analytical algorithm, is used to acquire dynamic characteristics of the isolation system. Since the primary resonance response is of interest, the steady solution to Equation (12) for can be written as: where and θ are the amplitude and phase of the response, respectively. Substituting Equation (13) into Equation (12) and making the coefficients of sin(Ωτ) and cos(Ωτ) equal to zero, the following relations can be obtained:
By the nature of trigonometric function, Equation (14) can be combined as the implicit amplitude-frequency equation:

From Equation (15), the positive solutions for non-dimensional excitation frequency Ω can be obtained as:
Equation (16) implies the relationships between Ω and during the steady-state response which are often plotted by frequency response curve (FRC). Based on this relationship, the following response features of the vibration isolation system can be predicted in the form of formulas.
The peak amplitude of vibration response occurs when Ω has a unique solution. Hence, the peak amplitude and the corresponding excitation frequency Ωpeak under QZS condition are: and
In resonance response, the backbone curve, drawn by the peak amplitude points (Ωpeak, ), can be formulated as:
When the square root of the denominator in Equation (17) is not positive, does not exist. To ensure the maximum response of the system is bounded, the parameters should be satisfied that:
In a nonlinear system, the jump phenomenon is always unavoidable. To investigate the stability of the steady-state response in Equation (13), a small disturbance is added in the harmonic solution. Then, is substituted into Equation (12) without considering the higher terms of , resulting in:
Therefore, the unstable solution of Equation (12) at steady state is given as:
Two FRCs of the vibration isolation system are plotted in Figure 8 to illustrated the transition of response from bounded to unbounded. is chosen as the variable parameter, and the maximum response is bounded when with , r = 1 and ξ = 0.12. At = 0.3, the FRC bends to the right as Ω grows, which denotes the hardening stiffness characteristic of the system. The unstable response region between the jump-down and the jump-up frequencies appears on the inclined side of the resonant response. As increases to 0.31, the FRC still has right bend and unstable region, but the maximum response of the system changes to unbounded.
In order to prove the vibration isolation capability of the QZS isolator, the equivalent linear vibration isolator is also given in this paper for comparison. When only the QCRM-NSC is removed but the other structures remain unchanged in Figure 6, the motion equation of the equivalent linear vibration isolation system can be derived as:
The response of the linear system can be easily obtained as:

4.3. Advantage of QCRM in Calculation Accuracy

Unlike the classic NSC whose complex stiffness needs to be approximated by the Taylor series expansion in dynamic analysis, the NSC composed of QCRMs can directly provide the negative stiffness in the form of a quadratic polynomial. In this subsection, the NSC with a semicircular cam trajectory is exemplified and compared to show the harmful effects of stiffness approximation on response prediction and parameter selection. Except for its positive stiffness element constructed by the same arrangement in Figure 6, the structure and derivation of its negative stiffness was detailed in [23]. Hence, the non-dimensional stiffness of the NSC with a semicircular cam trajectory is obtained as:
Its approximate stiffness from a second order Taylor expansion at the equilibrium point is: where is the non-dimensional pre-compressed length of the horizontal spring in the NSC with a semicircular cam trajectory, and equal to 2kv/kn under the QZS condition.
Figure 9 shows the comparisons between the non-dimensional original stiffness (OS) and the non-dimensional approximate stiffness (AS) with different . It can be found that the approximation accuracy is determined by both the structure parameter and the displacement. When = 0.4, the approximation error is large, and only a very small part of the displacement around = 0 can meet the calculation requirement. When = 0.9 (the choice of [23]), the approximation accuracy around small displacement is improved, but the error is still obvious at large displacement. The error caused by the stiffness approximation will reduce the reliability of the dynamic analysis of the vibration isolation system. To make matters worse, the choice of structure parameters and the working range of isolation displacement are limited to ensure that calculation results are acceptable. Higher order Taylor approximation can improve this issue, but it is rarely used because of the increased computational cost. By contrast, the stiffness provided by the QCRM-NSC is a quadratic function directly. This means that analysis under arbitrary displacements and parameters is reliable and easy to implement. The simple stiffness expression also facilitates the study of the NSC in isolators with nonlinear supporting or multi-layer nested structure.
Figure 10 demonstrates the influence of stiffness approximation from the perspective of dynamic response. The numerical response solutions of the dynamic equations with the original and the approximate stiffness, calculated by Runge–Kutta method (RKM), are plotted as the pink dashed line and the blue dash-dotted line, respectively. Compared with the FCR of the approximate analytical solution obtained by HBM, plotted as the black solid and dotted line, it can be seen that different calculation methods have little effect on calculation accuracy, which has been verified in literature. However, the approximation of stiffness makes the FRCs quite different. In the approximate FRC, not only does the large tilt on the original FRC disappear, but the correct peak amplitude and jump frequencies are not obtained. Moreover, the unbounded response is incorrectly given as bounded.

M.S. established the theoretical model and wrote this paper; X.S. and W.L. analyzed the data; Z.D. and G.S. contributed to some key ideas and revised the manuscript. All authors have read and agreed to the published version of the manuscript.

This research was funded by Liaoning Revitalization Talents Programs (No. XLYC1905003), the Liaoning PhD Research Start-up Fund (No. 2019BS181), and the Liaoning Provincial Department of Education Youth Breeding Project (No. LQGD2019007). 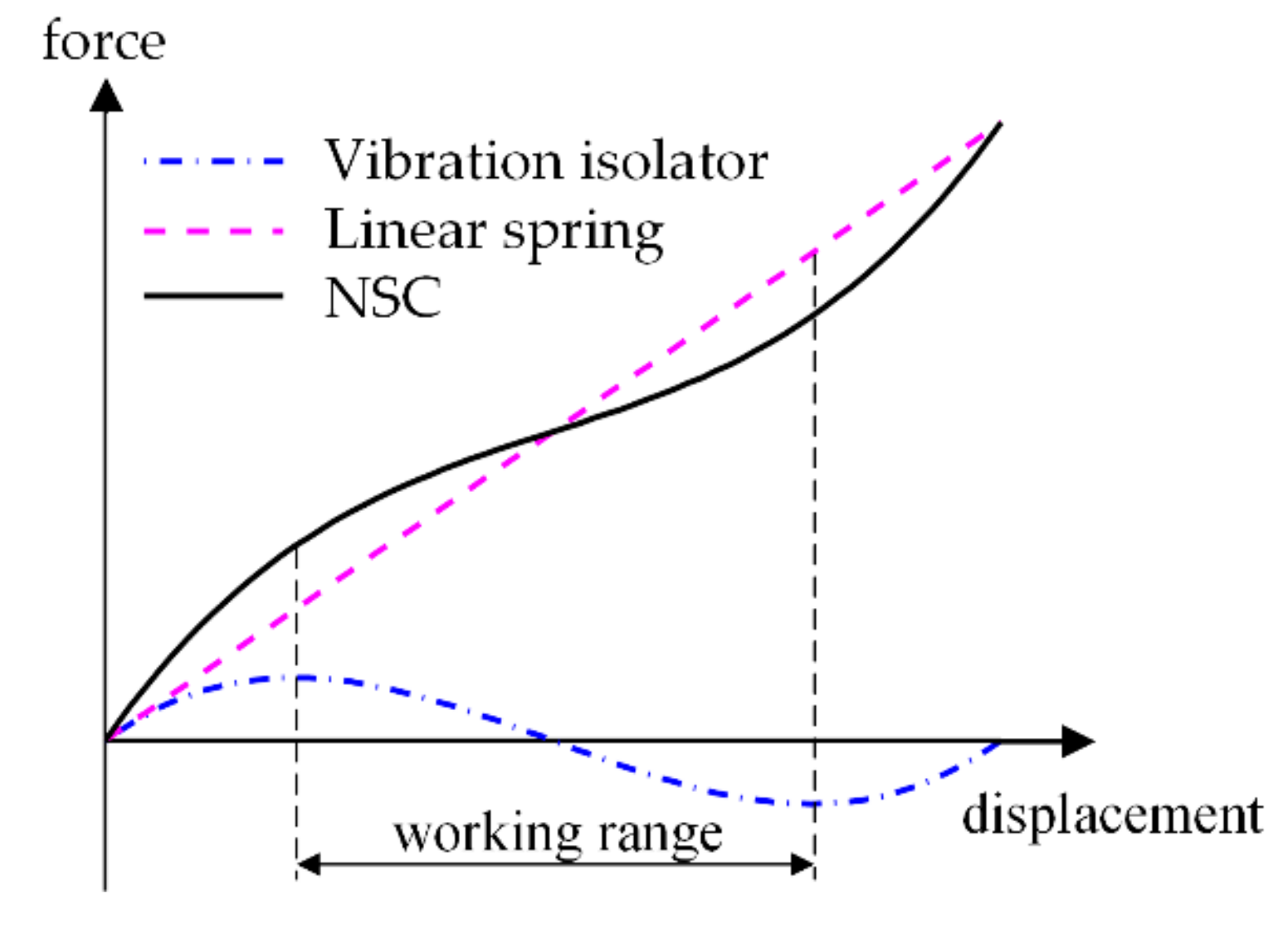 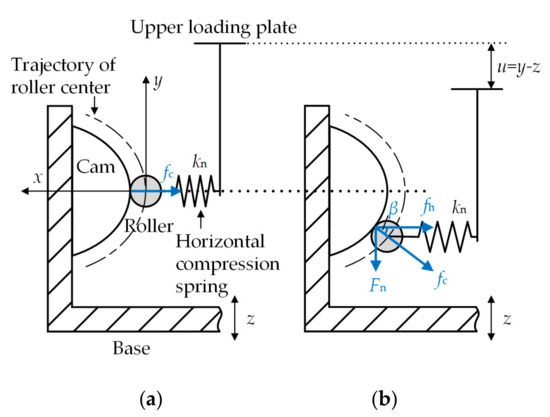 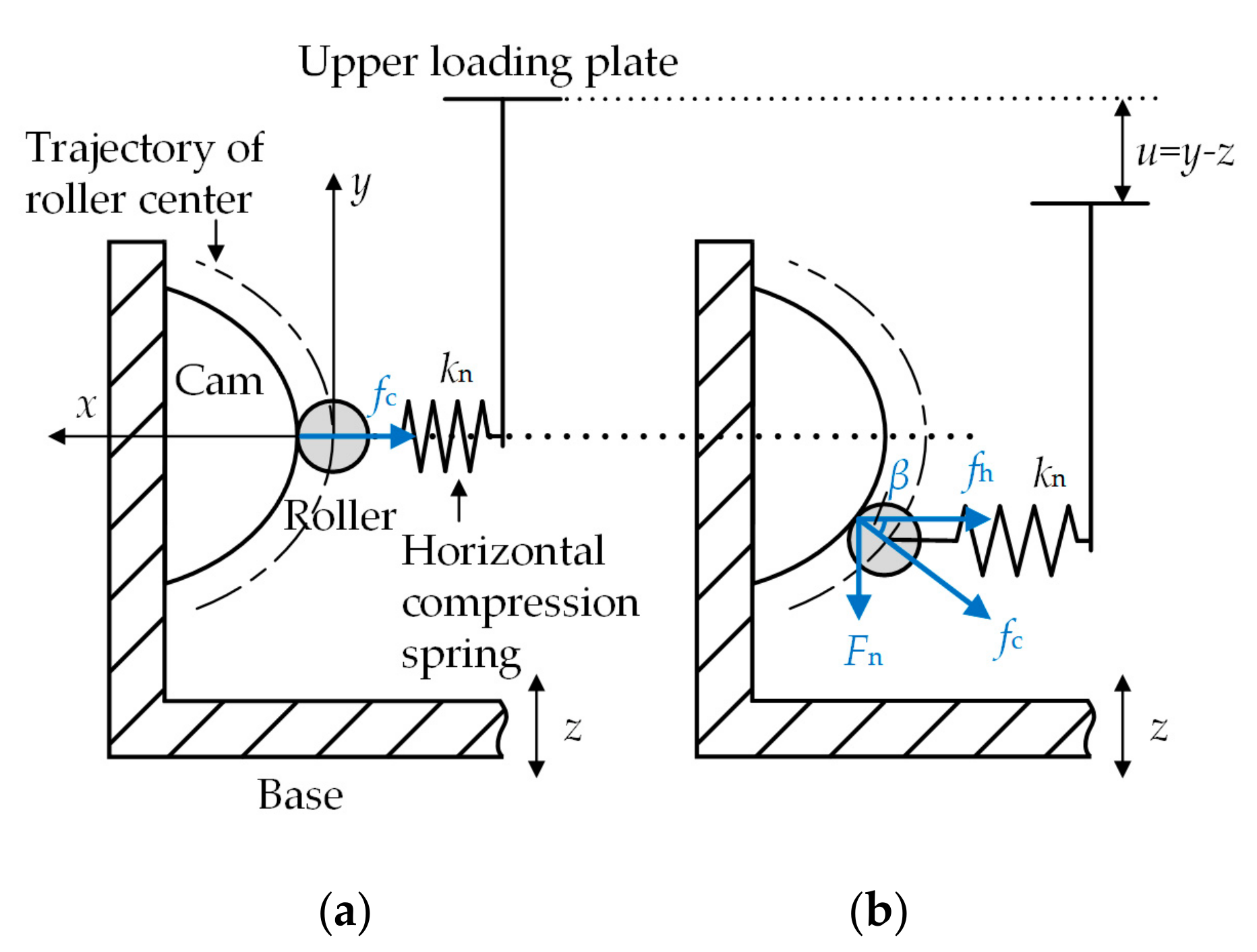 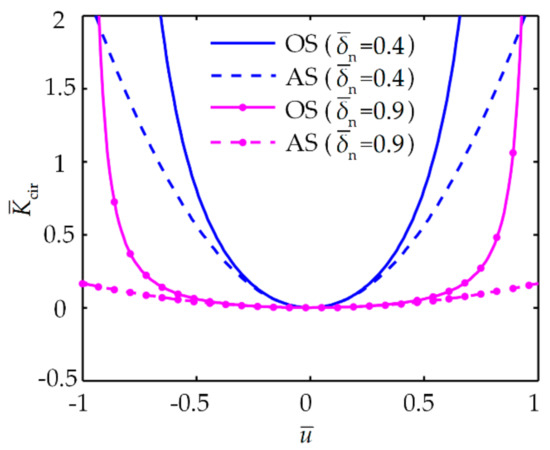 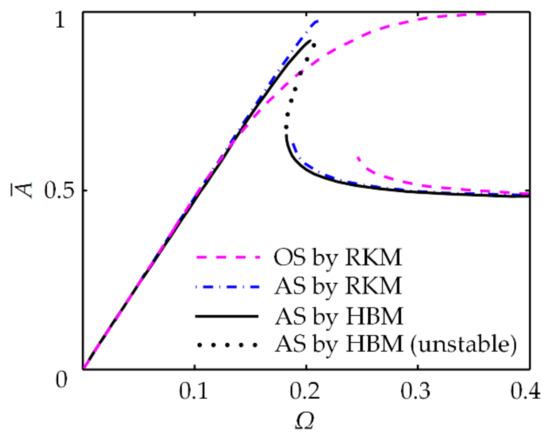 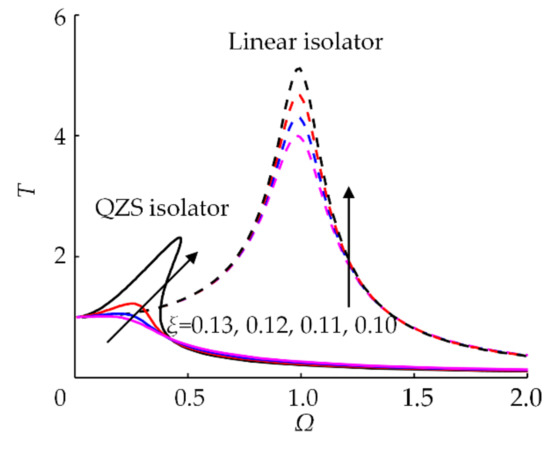 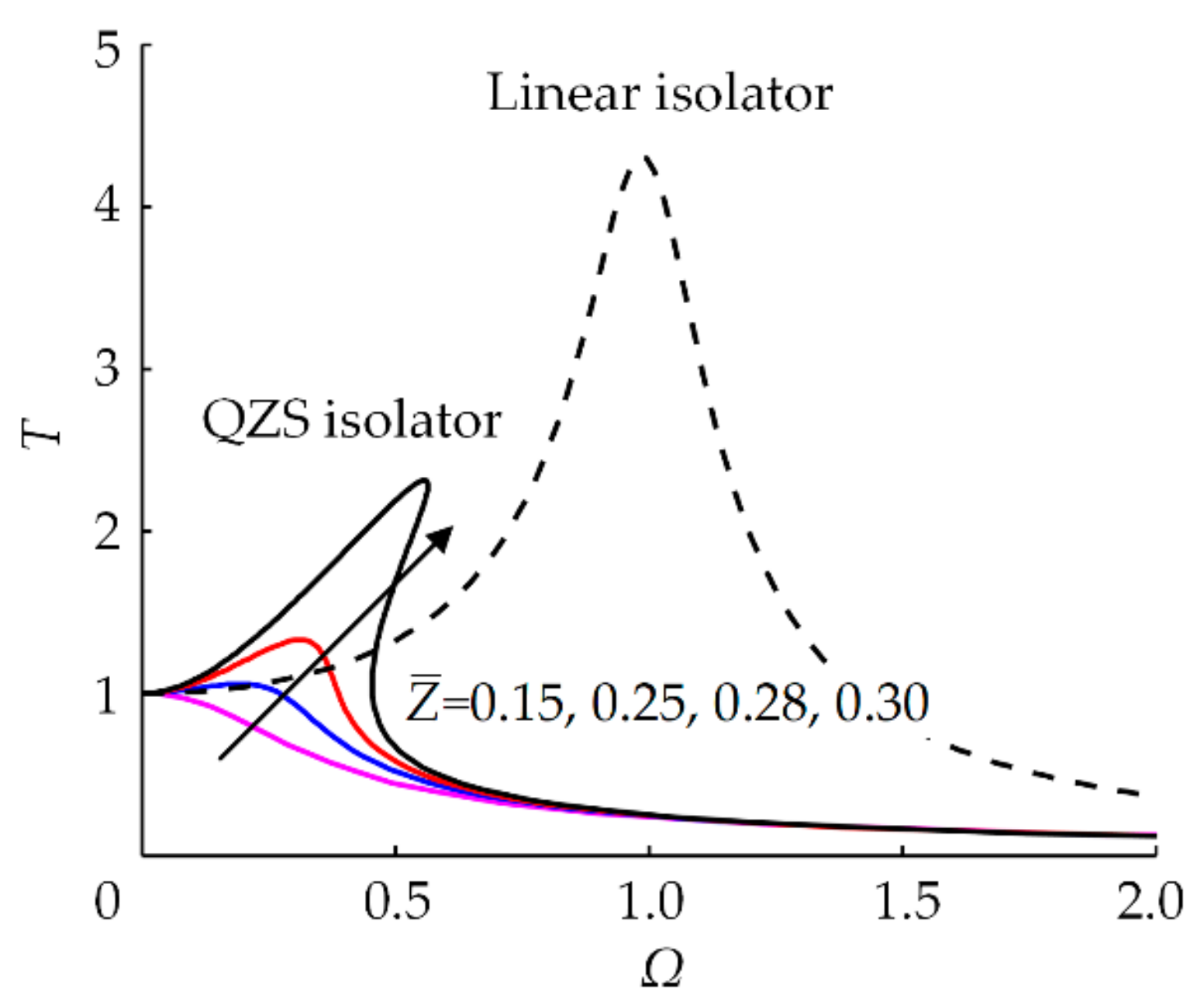 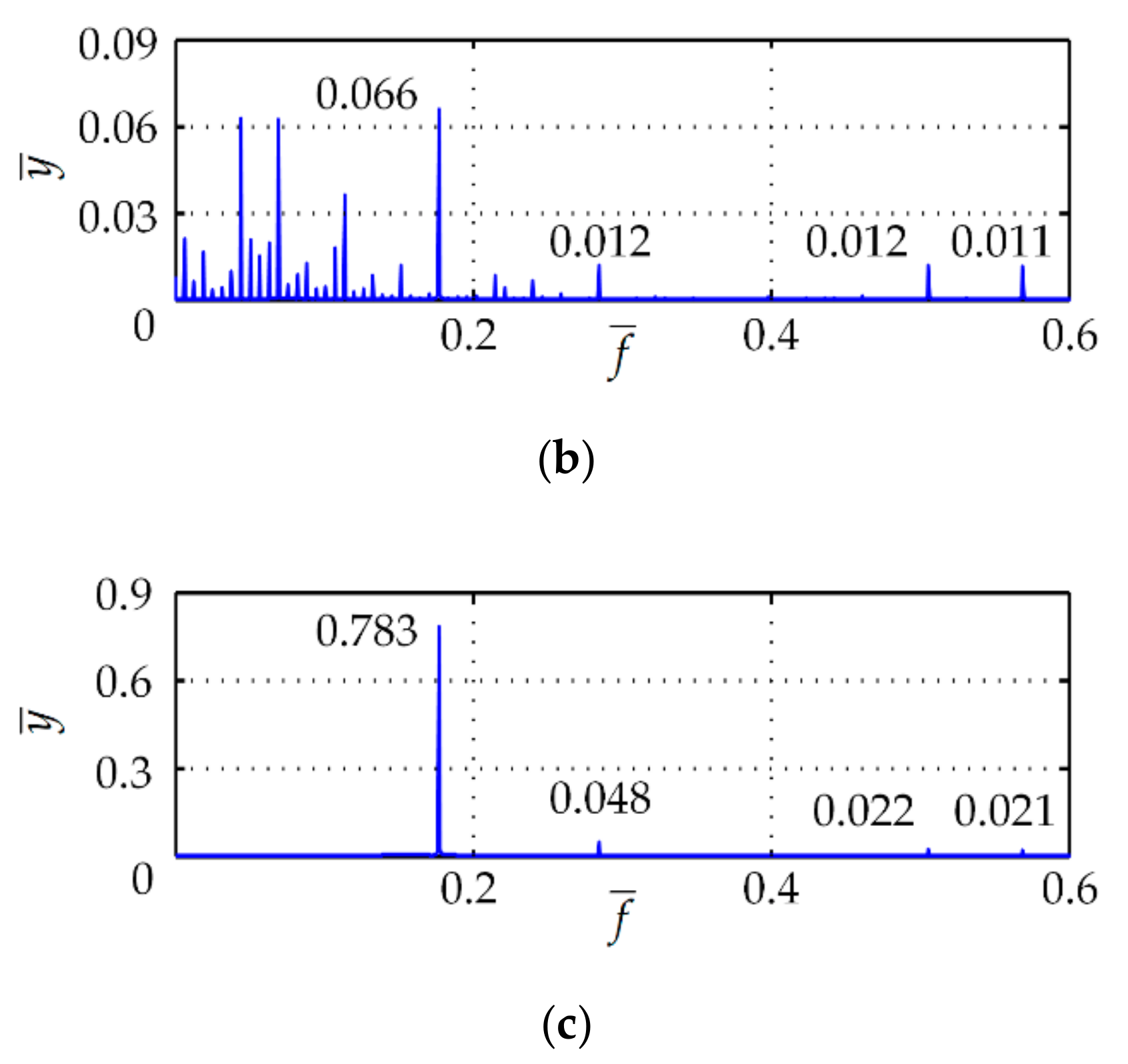 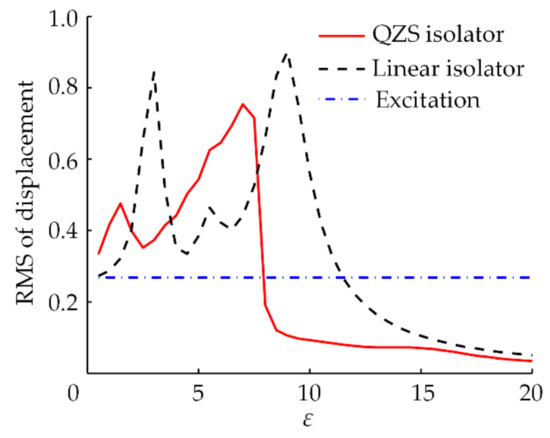 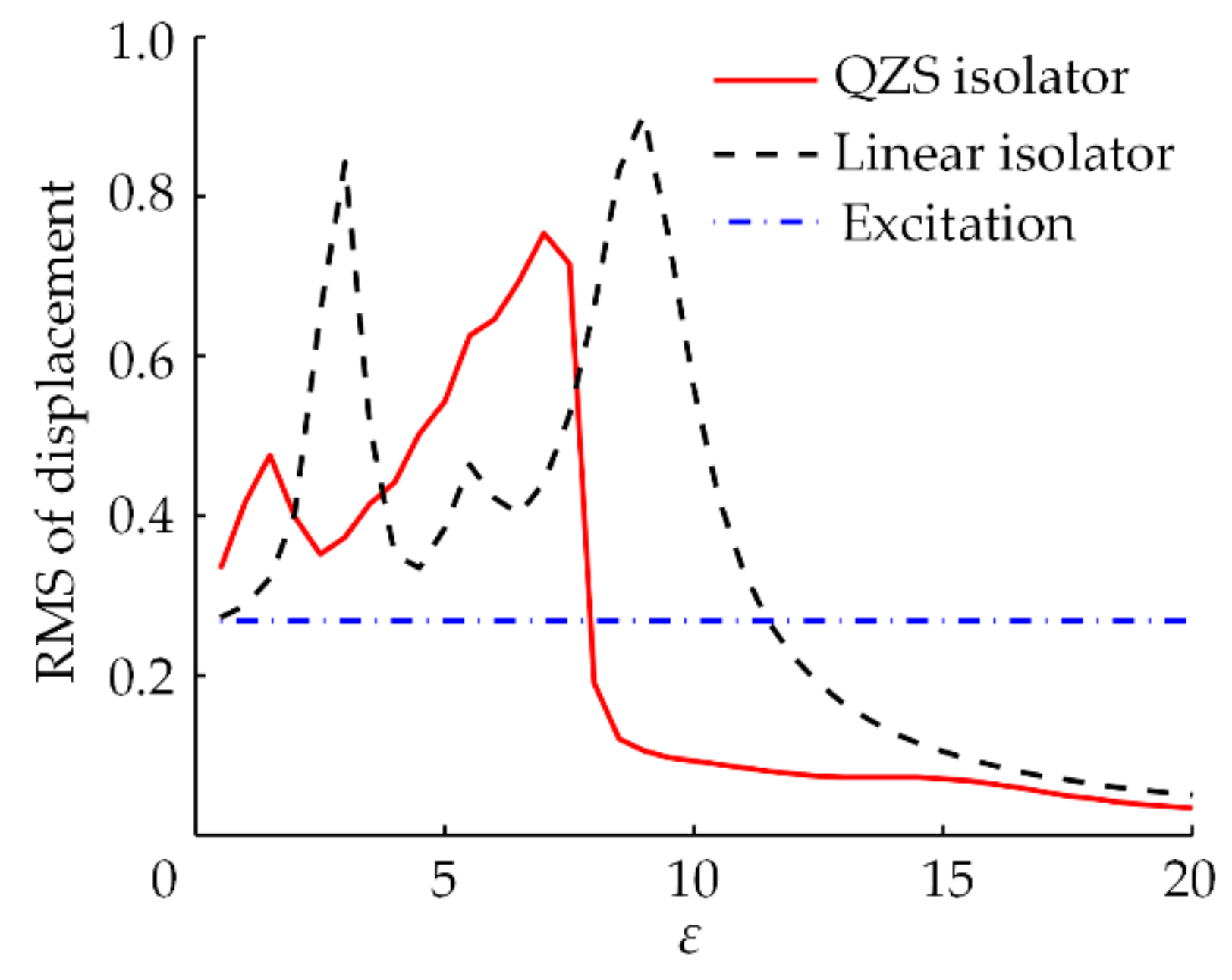 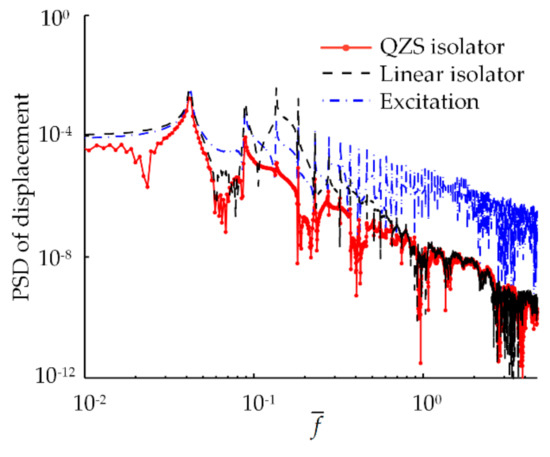 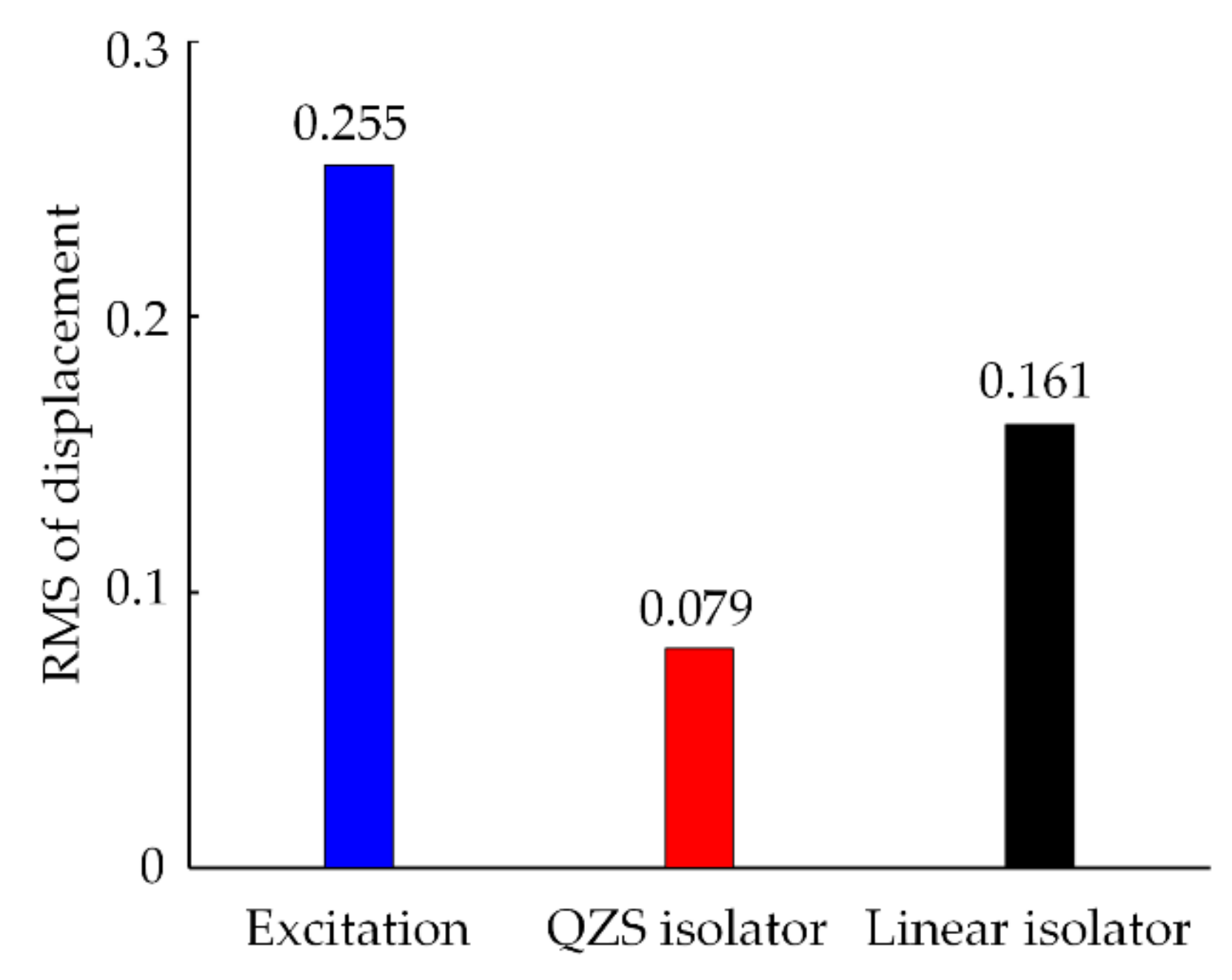 Table 1. Parameters of vibration isolator.
Table 1. Parameters of vibration isolator.
© 2020 by the authors. Licensee MDPI, Basel, Switzerland. This article is an open access article distributed under the terms and conditions of the Creative Commons Attribution (CC BY) license (http://creativecommons.org/licenses/by/4.0/).
We use cookies on our website to ensure you get the best experience. Read more about our cookies here.
Accept
We have just recently launched a new version of our website. Help us to further improve by taking part in this short 5 minute survey here. here.
Never show this again