Attributes of Process Maturity of Public Administration Units in Poland

The subjective scope of research presented in this study included Polish community offices of urban type8. The sample for research was selected with the use of a non-random selection method, i.e., a non-probabilistic one. Within this method, the judgmental sampling technique was applied. The entities were selected on the basis of the objective set (Churchill 2002, p. 500), i.e., those community offices were chosen thanks to which information on the use of process management could be obtained. Thus, it was established that the selection of community offices representing cities with a population of over 20,000 inhabitants allows for this objective to be achieved (269 community offices9. While the number of community inhabitants translates into the number of community office’s workers (Flieger 2012, p. 226), it was assumed that the surveyed entities are large enough for different process solutions to be applied in them10.
In order to identify the attributes describing process maturity of the researched community offices, the authors’ questionnaire was used. In the questionnaire the attributes were divided into four groups: (1) identification and improvement of processes occurring in community offices, (2) involvement of employees and managers involved in processes management, (3) deviations in process implementation, and (4) using tools to monitor process management.
The questionnaire was addressed to the secretary of the community office (city secretary). The choice of the city secretary as the respondent was supported by the fact that the objective of the person holding this position is to ensure proper organization of the community office’s work and implementation of the policy in the area of human resources management. This requires that the city secretary possess a broad knowledge of the functioning of the community office, the subject of activity of its individual units and the functioning normative acts.
The research was conducted using the computer assisted telephone interview (CATI) method, i.e., a computer-aided telephone interview, supplemented with a questionnaire sent by e-mail at the respondent’s request. As a result of the conducted survey, 174 valid questionnaires were obtained from the community offices (64.7% of the chosen sample). Such a high response rate may be related to the fact that in Poland public information is “open” and public organizations are very disciplined in participating in various research. In addition, the research was commissioned to a company specialized in conducting CATI research, which also affected the final number of responses received.
In order to examine the stochastic independence between the individual attributes of process maturity, the chi-square test of independence (χ2), also known as Pearson’s chi-squared test, was applied (Aczel 2000, pp. 757–58). Following hypotheses were put forward:
Hypothesis 1 (H1).
Two attributes of the community offices’ process maturity are mutually independent.
Hypothesis 2 (H2).
Two attributes of the community offices’ process maturity are not mutually independent.
In further analysis, Kendall’s τ test was applied. This method was used to examine the power and the direction of the existing dependence of the community offices’ maturity attributes.
In both cases the level of significance of α = 0.050 was used in the analysis.

4.1. The Attributes of Process Maturity of the Researched Community Offices

4.2. Relation between the Individual Attributes of Process Maturity of the Researched Community Offices

The examination of the stochastic independence between the individual attributes of process maturity of the researched community offices proved that there is a significant statistical dependence between the attributes. The test probability was p = 0.000 for all the pairs of attributes, which determines the rejection of the null hypothesis (H1). The results of this analysis are the basis of stating that the attributes are significantly different from each other. And only the assessment of all of them enables one to correctly diagnose the level of process maturity of the community offices. The power and the direction of the existing dependence is presented in Table 5 (where τ > 0 means the occurrence of positive correlation, τ < 0 means the occurrence of a negative correlation between the examined features). In the case of the analyzed attributes, a positive correlation was found between each of the pairs analyzed. In all the cases considered, the value of Kendall’s coefficient τ has assumed values above zero, therefore, it can be assumed that there was a significant positive correlation between individual attributes, despite the fact that their absolute value was low. In the case of only one of the analyzed attribute pairs (the existence of clear division of responsibility in the execution of processes and exceeding the time of process execution), the Kendall coefficient τ was zero. This indicates the non-existence of a monotonic relationship between the parameters studied. The obtained Kendall coefficients τ mostly represent a significant “consistency” of rank ordering (increasing monotonic dependence), i.e., the growth of the independent variable corresponds to the increase of the dependent variable in the case of the analyzed attributes.
In the case of analysis of attribute pairs in which the Kendall coefficient τ is close to zero, the correlations are irrelevant. In the case of an attribute saying that there is a clear division of responsibility in the execution of processes, correlation with other attributes is irrelevant in three cases: “execution of processes is improvised by employees” (p = 0.59), “specified processes are not observed“ (p = 0.37), and “the time of processes’ execution is exceeded” (p = 0.99). A similar situation occurs with the attribute “specified processes are not observed” and “number of processes in which their costs are monitored” (Kendall coefficient τ = 0.01, p = 0.85). The irrelevant dependencies between the attributes can also include those occurring between the exceeding the costs of processes and the attributes like: “there is an ad hoc response to emerging crises related to the execution of processes” (p = 0.22), “the success of process management implementation depends on the manager’s determination” (p = 0.49), and “the success of process management implementation depends on the employees’ determination” (p = 0.88). Demonstration of the lack of correlation between these attributes may be due to the fact that in the case of public administration, the costs of processes are calculated rarely or not at all. The highest value of the applied correlation coefficient was obtained in the case of the pair of the attributes: “number of the improved processes” and “number of plans elaborated to improve the processes” (Kendall coefficient τ = 0.60, p = 0.00). The same level of this coefficient occurs for the attributes: “number of processes in which their time of execution is monitored” and “number of processes in which their quality is monitored”. On this basis, it can be concluded that the community offices that monitor the process duration, also monitor their quality.

On the basis of the conducted research, 15 attributes describing process maturity of the Polish community offices of urban type were identified. Analyzing the research results, it can be stated that elements of process management are used in most of the surveyed entities. At the same time, one can observe that individual attributes are implemented at different levels in the community offices. Moreover, one can observe that:

-
Despite the fairly high level of process identification in the researched community offices, these entities rarely had plans to improve all the processes, and actually improved them.
-
The researched entities, while monitoring the implementation of processes, mainly focused on their cost. Less frequently monitored parameters for all the processes were: The time of their duration, their quality, and the level of processes’ customers satisfaction.
-
The respondents of the survey seemed to underestimate the role of managers and employees when implementing the process approach in the community offices.
-
The most common deviations occurring during the implementation of processes in the surveyed entities were ad-hoc responses to emerging crises in the execution of processes. And almost 1/3 of the surveyed entities also improvised the execution of processes and exceeded the assumed time for their execution.
-
The results of the analysis of stochastic independence (chi-quadrant independence test) between individual attributes allow us to state that the attributes significantly differ from each other. And only the assessment of all of them allows for correct diagnosis of the level of process maturity of the community offices.

This research was funded by the internal financial resources of the Faculty of Economics of University of Warmia and Mazury in Olsztyn. 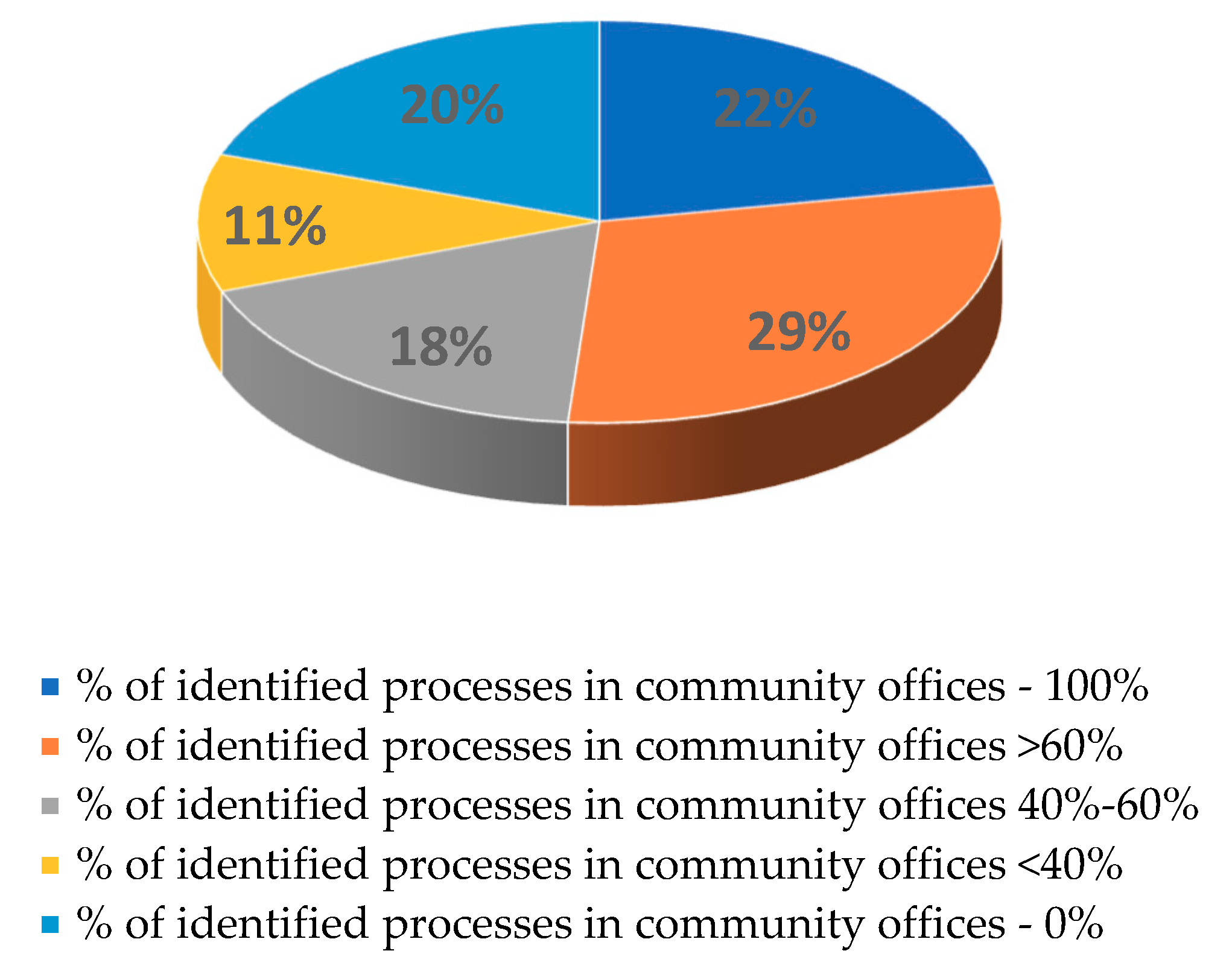