Land Use-Cover Changes (LUCCs) are one of the main problems for the preservation of biodiversity. Protected Areas (PAs) do not escape this threat. Some processes, such as intensive recreational use, forest fires or the expansion of artificial areas taking place inside and around them in response to their appeal, question their environmental sustainability and their efficiency. In this paper, we analyze the LUCCs that took place between 1990 and 2006 in two National Parks (NPs) belonging to the Spanish network and in their surroundings: Ordesa and Monte Perdido (Ordesa NP) and Sierra de Guadarrama (Guadarrama NP). We also simulate land use changes between 2006 and 2030 by means of Artificial Neural Networks (ANNs), taking into account two scenarios: trend and green. Finally, we perform a multi-temporal analysis of natural habitat fragmentation in each NP. The results show that the NPs analyzed are well-preserved and have seen hardly any significant LUCCs inside them. However, Socioeconomic Influence Zones (SIZs) and buffers are subject to different dynamics. In the SIZ and buffer of the Ordesa NP, there has been an expansion of built-up areas (annual rate of change = +1.19) around small urban hubs and ski resorts. There has also been a gradual recovery of natural areas, which had been interrupted by forest fires. The invasion of sub-alpine grasslands by shrubs is clear (+2735 ha). The SIZ and buffer of the Guadarrama NP are subject to urban sprawl in forest areas and to the construction of road infrastructures (+5549 ha and an annual rate of change = +1.20). Industrial area has multiplied by 3.3 in 20 years. The consequences are an increase in the Wildland-Urban Interface (WUI), greater risk of forest fires and greater fragmentation of natural habitats (+0.04 in SIZ). In the change scenarios, if conditions change as expected, the specific threats facing each NP can be expected to increase. There are substantial differences between the scenarios depending on whether or not incentives are accepted and legal restrictions are respected. View Full-Text
Keywords: land use-cover changes; change scenarios; artificial neural networks; habitat fragmentation; protected areas; Spain land use-cover changes; change scenarios; artificial neural networks; habitat fragmentation; protected areas; Spain
►▼ Show Figures 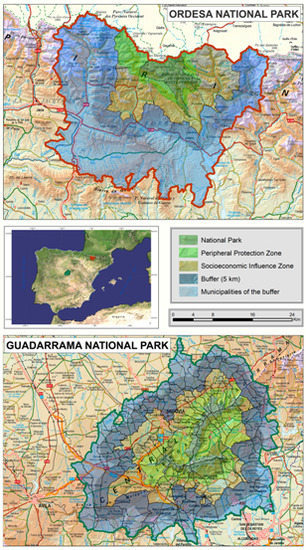