Land-use and land-cover changes are driving unprecedented changes in ecosystems and environmental processes at different scales. This study was aimed at identifying the potential land-use drivers in the Jedeb catchment of the Abbay basin by combining statistical analysis, field investigation and remote sensing. To do so, a land-use change model was calibrated and evaluated using the SITE (SImulation of Terrestrial Environment) modelling framework. SITE is cellular automata based multi-criteria decision analysis framework for simulating land-use conversion based on socio-economic and environmental factors. Past land-use trajectories (1986–2009) were evaluated using a reference Landsat-derived map (agreement of 84%). Results show that major land-use change drivers in the study area were population, slope, livestock and distances from various infrastructures (roads, markets and water). It was also found that farmers seem to increasingly prefer plantations of trees such as Eucalyptus by replacing croplands perhaps mainly due to declining crop yield, soil fertility and climate variability. Potential future trajectory of land-use change was also predicted under a business-as-usual scenario (2009–2025). Results show that agricultural land will continue to expand from 69.5% in 2009 to 77.5% in 2025 in the catchment albeit at a declining rate when compared with the period from 1986 to 2009. Plantation forest will also increase at a much higher rate, mainly at the expense of natural vegetation, agricultural land and grasslands. This study provides critical information to land-use planners and policy makers for a more effective and proactive management in this highland catchment. View Full-Text
Keywords: land-use; land cover; Blue Nile; parameterization land-use; land cover; Blue Nile; parameterization
►▼ Show Figures 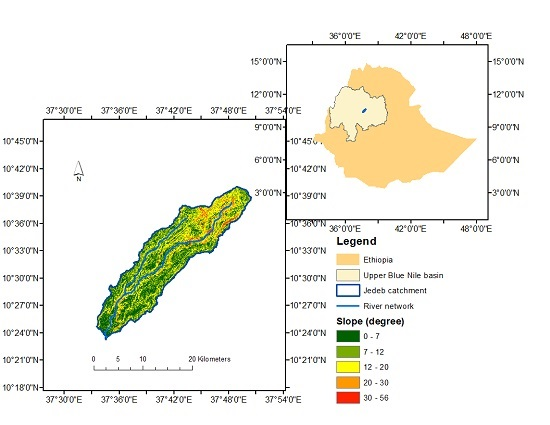