From Augustine of Hippo’s Memory Systems to Our Modern Taxonomy in Cognitive Psychology and Neuroscience of Memory: A 16-Century Nap of Intuition before Light of Evidence

Over the last half century, neuropsychologists, cognitive psychologists and cognitive neuroscientists interested in human memory have accumulated evidence showing that there is not one general memory function but a variety of memory systems deserving distinct (but for an organism, complementary) functional entities. The first attempts to organize memory systems within a taxonomic construct are often traced back to the French philosopher Maine de Biran (1766–1824), who, in his book first published in 1803, distinguished mechanical memory, sensitive memory and representative memory, without, however, providing any experimental evidence in support of his view. It turns out, however, that what might be regarded as the first elaborated taxonomic proposal is 14 centuries older and is due to Augustine of Hippo (354–430), also named St Augustine, who, in Book 10 of his Confessions, by means of an introspective process that did not aim at organizing memory systems, nevertheless distinguished and commented on sensible memory, intellectual memory, memory of memories, memory of feelings and passion, and memory of forgetting. These memories were envisaged as different and complementary instances. In the current study, after a short biographical synopsis of St Augustine, we provide an outline of the philosopher’s contribution, both in terms of questions and answers, and focus on how this contribution almost perfectly fits with several viewpoints of modern psychology and neuroscience of memory about human memory functions, including the notion that episodic autobiographical memory stores events of our personal history in their what, where and when dimensions, and from there enables our mental time travel. It is not at all meant that St Augustine’s elaboration was the basis for the modern taxonomy, but just that the similarity is striking, and that the architecture of our current viewpoints about memory systems might have preexisted as an outstanding intuition in the philosopher’s mind. View Full-Text
Keywords: cognitive psychology; declarative memory; emotions; episodic memory; memory; psychology and neuroscience of memory; philosophy; semantic memory; taxonomy of memory systems cognitive psychology; declarative memory; emotions; episodic memory; memory; psychology and neuroscience of memory; philosophy; semantic memory; taxonomy of memory systems
►▼ Show Figures 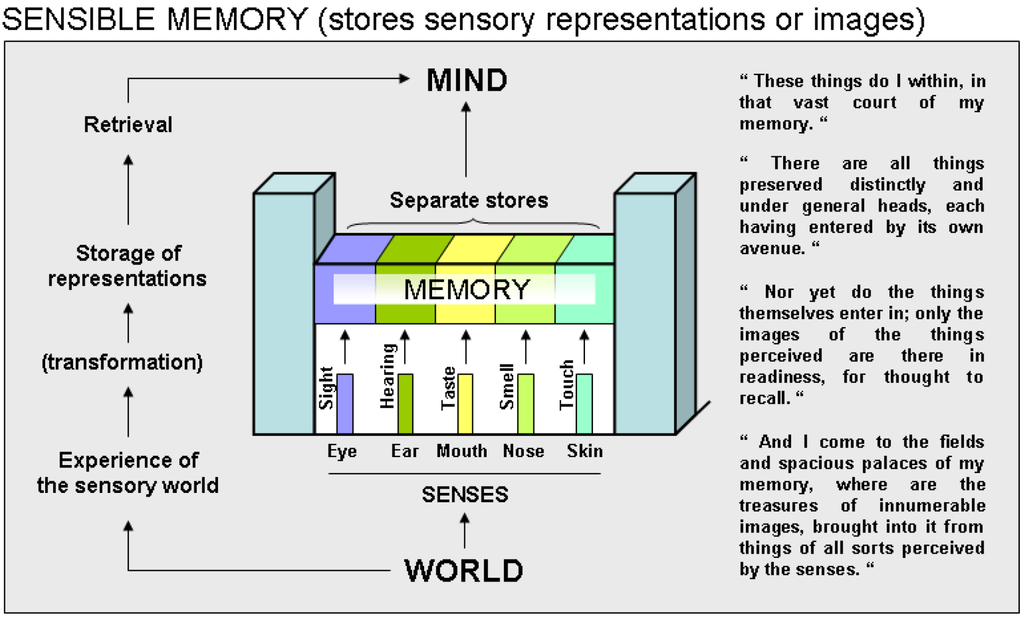 
Cassel, Jean-Christophe, Daniel Cassel, and Lilianne Manning. 2013. "From Augustine of Hippo’s Memory Systems to Our Modern Taxonomy in Cognitive Psychology and Neuroscience of Memory: A 16-Century Nap of Intuition before Light of Evidence" Behavioral Sciences 3, no. 1: 21-41. https://doi.org/10.3390/bs3010021