Nowadays, there seems to be a consensus about the multifactorial nature of autism spectrum disorders (ASD). The literature provides hypotheses dealing with numerous environmental factors and genes accounting for the apparently higher prevalence of this condition. Researchers have shown evidence regarding the impact of gut bacteria on neurological outcomes, altering behavior and potentially affecting the onset and/or severity of psychiatric disorders. Pesticides and agrotoxics are also included among this long list of ASD-related environmental stressors. Of note, ingestion of glyphosate (GLY), a broad-spectrum systemic herbicide, can reduce beneficial bacteria in the gastrointestinal tract microbiota without exerting any effects on the Clostridium population, which is highly resistant to this herbicide. In the present study, (i) we performed a systematic review to evaluate the relationship between Clostridium bacteria and the probability of developing and/or aggravating autism among children. For that purpose, electronic searches were performed on Medline/PubMed and Scielo databases for identification of relevant studies published in English up to December 2017. Two independent researches selected the studies and analyzed the data. The results of the present systematic review demonstrate an interrelation between Clostridium bacteria colonization of the intestinal tract and autism. Finally, (ii) we also hypothesize about how environmental GLY levels may deleteriously influence the gut–brain axis by boosting the growth of Clostridium bacteria in autistic toddlers.
Keywords: Clostridium; bacteria; gut microbes; gene-environment interactions; pollution; pesticides; agrotoxics; brain; autism spectrum disorders Clostridium; bacteria; gut microbes; gene-environment interactions; pollution; pesticides; agrotoxics; brain; autism spectrum disorders

Autism and autism spectrum disorders (ASD) are indistinctively used terms to define a group of disorders of brain development. ASD include autistic disorder, Asperger’s syndrome, pervasive developmental disorder not otherwise specified (PDD-NOS), and childhood disintegrative disorder [1]. For decades, the etiology of ASD has been strongly controversial and numerous researchers have proposed their own so-called “autistic gene” and innumerous environmental stressors [2,3,4] to explain the apparent rapid increase in incidence rates over the last 20 years, with 4:1 male to female ratio prevalence [5]. Overall, the causes of such differences are not completely understood.
Our group has studied ASD from a multifactorial perspective and recently proposed a consensus in silico network model “GENVI” capable of integrating reported and other novel putative gene–environment interactions in autism. The network interconnected 122 genes/proteins and 191 factors (drugs, pollutants, chemicals and pesticides and other stressors) through 1461 interactions [6]. In this network model, the Ras-related C3 botulinum toxin substrate 1 (Rho GTPase RAC1) displayed a central topological position at the interface between genetic and environmental factors of ASD and, in general, the Rho family of GTPases showed differential expression in the cerebellum of autistic patients when compared to control samples [6,7].
Appropriate early-life assembly of the gut microbiota is believed to play a critical role in subsequent emotional and cognitive development. The brain-gut-microbiota axis is defined as a communication network between the brain, the gut, and the bacteria residing there. Both development and maintenance of a diverse gut flora is crucial for accomplishing successful behavioral tasks and proper physiology and structure of the brain [8]. In 2017, we postulated that the differential expression of the Rho family of small GTPases found in the cerebellum of patients [6,7] would be consistent with recent reports supporting Clostridium spores as key elements in the etiology of autism [9], since the Ras and Rho family of GTPases are specifically targeted by clostridial toxins [10]. Moreover, while preparing this manuscript an elegant case study [11] reported elevated urinary glyphosate (GLY) and Clostridium-related metabolites with altered dopamine metabolism in triplets with ASD or suspected seizure disorder. Thus, in the present systematic review, we search for literature evidence regarding the interrelation between the presence of Clostridium bacteria and the etiology of autism and thereafter, we postulate about how the environmental exposure to GLY, post-emergent systemic herbicide with activity on essentially all annual and perennial plants, may potentially contribute to the disruption of the gut-brain axis by facilitating the growth of clostridial species.

Is there an interrelation between clostridium bacteria colonization of the intestinal tract and the neurological symptoms associated with ASD patients?

The literature was screened to identify published articles linking the colonization of Clostridium bacteria of the intestinal tract and autism. Comprehensive and systematic electronic searches were performed on Medline/Pubmed (https://www.ncbi.nlm.nih.gov/pubmed/) and Scielo (http://www.scielo.org/php/index.php?lang=es) Databases by two independent investigators (IAC and FZC), started from 8 January 2017 until 30 November 2017. The following terms were used: (tw: [“Clostridium” or “Clostridia” or “Clostridial species” or “Clostridial spores”]) AND (tw: [Autism] or [Autism spectrum disorders] or [Autistic patients] or [ASD]. Duplicate references were excluded and analyzed by the same two reviewers (I.A-C. and F.Z-C.) based on inclusion and exclusion criteria. In addition to the electronic search, the authors performed a hand search of the reference lists from the selected articles, for identifying potentially missing studies that may deserve analysis in the present systematic review.

Studies were included only if they dealt with evidence linking the colonization of Clostridium bacteria with neurological symptoms and/or etiology of ASD on human individuals, without time restrictions, based on the following inclusion criteria:

The detailed screening was independently conducted by two reviewers (I.A-C. and F.Z-C.) with the predefined eligibility criteria. All articles were identified and classified by their title and abstract to selection criteria. After previous screening of titles and abstract, the full articles were evaluated by the same reviewers. The cases of disagreement between authors were solved after discussion. For the next screening phase, the complete scientific publication was read and analyzed. Data regarding the study design, sample size, study characteristics, year of publication, and limitations were collected from each included study.

4. Discussion: An Interrelation between Glyphosate, Clostridium Bacteria, and Autism?

The results of the present systematic review demonstrate an association between Clostridium bacteria colonization of the intestinal tract and ASD. In addition, we also postulate about how environmental GLY levels may deleteriously influence the gut-brain axis by boosting the growth of Clostridium bacteria in these patients. 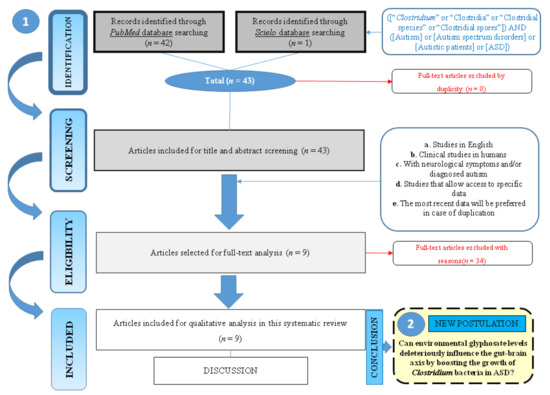