Why Oats Are Safe and Healthy for Celiac Disease Patients

The water-insoluble storage proteins of cereals (prolamins) are called “gluten” in wheat, barley, and rye, and “avenins” in oat. Gluten can provoke celiac disease (CD) in genetically susceptible individuals (those with human leukocyte antigen (HLA)-DQ2 or HLA-DQ8 serotypes). Avenins are present at a lower concentration (10%–15% of total protein content) in oat as compared to gluten in wheat (80%–85%). The avenins in the genus Avena (cultivated oat as well as various wild species of which gene bank accessions were analyzed) are free of the known CD immunogenic epitopes from wheat, barley, and rye. T cells that recognize avenin-specific epitopes have been found very rarely in CD patients. CD patients that consume oats daily do not show significantly increased levels of intraepithelial lymphocyte (EIL) cells. The safety and the positive health effects of the long-term inclusion of oats in the gluten-free diet have been confirmed in long-term studies. Since 2009 (EC 41/2009) and 2013 (FDA) oat products may be sold as gluten-free in several countries provided a gluten contamination level below 20 ppm. Introduction of oats in the gluten-free diet of celiac patients is advised after the recovery of the intestine. Health effects of oat consumption are reflected in European Food Safety Authority (EFSA)- and Food and Drug Administration (FDA)-approved health claims. Oats can form a healthy, nutritious, fiber-rich, and safe complement to the gluten-free diet. View Full-Text
Keywords: celiac disease; gluten-free; avenin; health claim celiac disease; gluten-free; avenin; health claim
►▼ Show Figures 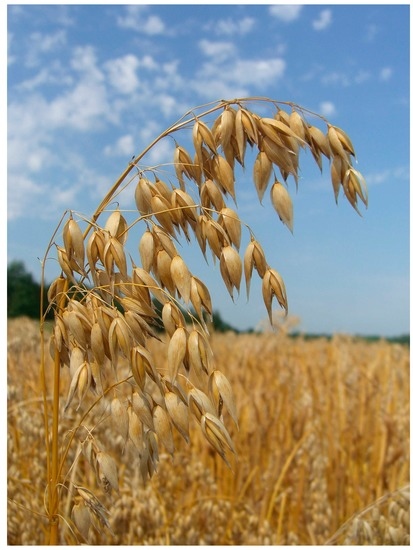