Remote Sensing and Historical Morphodynamics of Alluvial Plains. The 1909 Indus Flood and the City of Dera Ghazi Khan (Province of Punjab, Pakistan)
Previous Article in Journal

A range of data sources are now used to support the process of archaeological prospection, including remote sensed imagery, spy satellite photographs and aerial photographs. This paper advocates the value and importance of a hitherto under-utilised historical mapping resource—the Survey of India 1” to 1-mile map series, which was based on surveys started in the mid–late nineteenth century, and published progressively from the early twentieth century AD. These maps present a systematic documentation of the topography of the British dominions in the South Asian Subcontinent. Incidentally, they also documented the locations, the height and area of thousands of elevated mounds that were visible in the landscape at the time that the surveys were carried out, but have typically since been either damaged or destroyed by the expansion of irrigation agriculture and urbanism. Subsequent reanalysis has revealed that many of these mounds were actually the remains of ancient settlements. The digitisation and analysis of these historic maps thus creates a unique opportunity for gaining insight into the landscape archaeology of South Asia. This paper reviews the context within which these historical maps were created, presents a method for georeferencing them, and reviews the symbology that was used to represent elevated mound features that have the potential to be archaeological sites. This paper should be read in conjunction with the paper by Arnau Garcia et al. in the same issue of Geosciences, which implements a research programme combining historical maps and a range of remote sensing approaches to reconstruct historical landscape dynamics in the Indus River Basin. View Full-Text
Keywords: archaeological landscapes; settlements; historical maps; Survey of India; Archaeological Survey of India; heritage; colonial studies archaeological landscapes; settlements; historical maps; Survey of India; Archaeological Survey of India; heritage; colonial studies
►▼ Show Figures 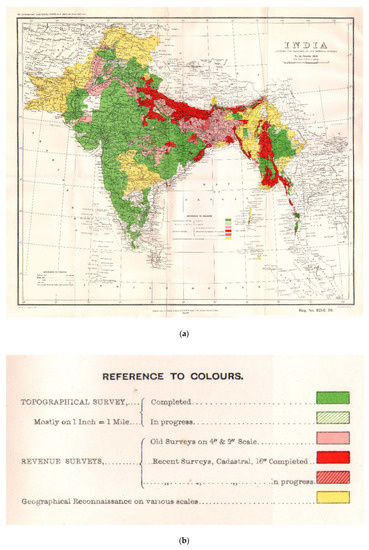