The Tampomas Volcano is a Quaternary volcano located on Java Island and controlled by a west-northwest–east-southeast (WNW-ESE) regional fault trend. This regional structure acts as conduits for the hydrothermal fluids to ascend from a deeper system toward the surface and, in the end, mix with groundwater. In this research, water geochemistry, gas chemistry and isotopes 2H, 18O and 13C were used to explore the subsurface fluid characteristics and mixing mechanisms of the hydrothermal fluids with groundwater. In addition to those geochemical methods, soil-gas and dissolved 222Rn observations were performed to understand the geological control of fluid chemistry. Based on the analytical results, the hydrothermal system of Tampomas is only developed at the northeastern flank of the volcano, which is mainly controlled by NE-SW structures as deep fluid conduits, while the Cimalaka Caldera Rim around Sekarwangi act as the boundary flow of the system. This system is also categorized as an “intermediate temperature system” wherein fluid is derived from the interaction between the volcanic host-rock at 170 ± 10 °C mixed with trace organic gas input from sedimentary formation; afterwards, the fluid flows laterally and is diluted with groundwater near the surface. Soil-gas and dissolved 222Rn confirm that these permeable zones are effective conduits for the ascending thermal fluids. It is found that NE faults carry higher trace elements from the deeper system, while the circular feature of the Caldera Rim acts as the boundary of the hydrothermal system. View Full-Text
Keywords: geochemistry; hydrothermal; radon; Tampomas; deep circulated thermal fluid; permeability fault; groundwater geochemistry; hydrothermal; radon; Tampomas; deep circulated thermal fluid; permeability fault; groundwater
►▼ Show Figures 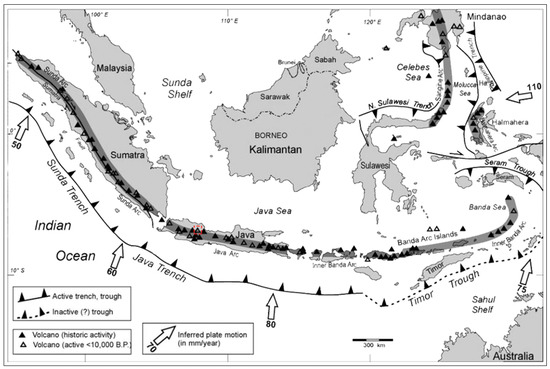