Faults as Windows to Monitor Gas Seepage: Application to CO2 Sequestration and CO2-EOR
Next Article in Special Issue

The Nippon Foundation—GEBCO Seabed 2030 Project: The Quest to See the World’s Oceans Completely Mapped by 2030

Shelf morphology and sedimentary regimes are influenced by processes operating at different temporal and spatial scales and are important records of sea level changes and sediment supply and/or carbonate production. The northern continental shelf of Espírito Santo (Brazil) contains evidence of different sedimentary regimes that distribute diverse and complex marine habitats. Herein, seabed morphology, acoustic images of the seafloor (side scan sonar and sub-bottom profiler), and sediment samples were used to investigate the influence of sedimentary regimes on physical marine habitat distribution. Seabed mapping is also integrated with available data on fisheries to understand the influence of shelf morphology and sedimentology in the usage of distinct fishing gears. The results indicate five morpho-sedimentary facies: terrigenous mud, terrigenous sand, rhodolith beds, carbonate gravel with rhodoliths, and hardground. Through an integrated analysis of the geomorphology and sedimentary distribution, two morpho-sedimentary domains were identified: a sediment-fed shelf adjacent to the Doce River associated with a major mud depocenter and a delta front morphology characterized by gentle slopes and low terrain ruggedness, and a sediment-starved shelf dominated by carbonate sedimentation showing an irregular morphology associated with higher slopes and terrain ruggedness. These contrasting morpho-sedimentary domains are a result of sedimentary responses to sea level fluctuation during Late Quaternary, specially, during the deglaciation processes after the Last Glacial Maximum. The morphological and sedimentary contrasts along the area define the physical habitat distribution. The sediment supply regime area is associated with a terrigenous fine/muddy sedimentation bed, which control the local morphology and favors coastal and delta front progradation. This physical habitat is a well-known shrimp-fishing ground where intense trawling takes place, as well as gillnet fisheries targeting weakfish and croakers. The accommodation regime or low sediment influx area is characterized by carbonate sedimentation associated with hardgrounds and rhodolith beds. In contrast, this physical habitat with scarce sediment supply, facilitates extensive benthic colonization by crustose coralline algae (CCA), which is primarily associated to line fisheries, longlines, and spearfishing. Rhodoliths show a high diversity of CCA and the occurrence of an endemic kelp species. Long-term processes such as relative sea level fluctuations and sediment supply are a legacy for the distribution of benthic habitats, and their resulting morphology can be a surrogate for predicting fishing activities or a first-base analysis for marine spatial planning. Available low-resolution bathymetric datasets can be a powerful tool, if applied with caution and in a regional scale approach. Here, terrain variables (terrain slope and ruggedness) derived from an extensive available (low-resolution and interpolated) bathymetric dataset distinguished two contrasting morphological domains characterized by rugged and smooth/flat seabeds. View Full-Text
Keywords: benthic habitats; shelf morphology; eastern Brazilian shelf benthic habitats; shelf morphology; eastern Brazilian shelf
►▼ Show Figures 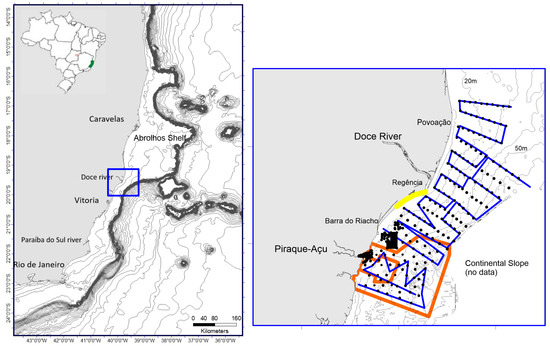