Present Glaciers of Tavan Bogd Massif in the Altai Mountains, Central Asia, and Their Changes since the Little Ice Age
Previous Article in Journal

Unusual Isolated Large Clasts from the Periphery of the Lagonaki Highland, Western Caucasus: New Evidence of Classification and Origin

Large clasts are in focus of the modern geoscience research, but their broadly-accepted classification is absent and specialists tend to over-emphasize on clasts of coastal zones. New field investigations in the Western Caucasus have permitted the finding of isolated large clasts of carbonate composition that occur above the Early–Middle Jurassic shale sequence and that are covered by modern soils. These clasts can be determined either as large boulders or megaclasts (blocks) depending on the preferred classification. Their shape is chiefly irregular, although smoothened surfaces and rounded angles (resulting from previous karstification) are also registered. These large clasts are located quite far from the natural outcrops of the Late Jurassic carbonates, which are their parent rocks. The origin of these clasts can be linked to collapses of the Pleistocene cliff of a cuesta-type mountain range, which later retreated to its present position. The evidence from the study area implies the size of 1 m or 2 m as a plausible criterion for distinction of boulders and megaclasts, and it also makes claims towards the development of a wider genetic typology of megaclasts. View Full-Text
Keywords: cliff retreat; Jurassic; limestones; megaclast; SW Russia cliff retreat; Jurassic; limestones; megaclast; SW Russia
►▼ Show Figures 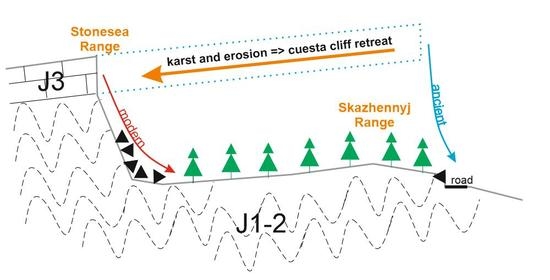