Assessment of the Evolution of a Landslide Using Digital Photogrammetry and LiDAR Techniques in the Alpujarras Region (Granada, Southeastern Spain)
Previous Article in Journal

Large landslides, triggered by earthquakes or heavy rainfall, often obstruct the river’s flow to form landslide dams, causing upstream inundations, and downstream flooding. In Italy, landslide dams are rather widespread along in Alps and Apennines: although the identification of past events is a complex task, some hundreds of landslide dams are identified in the literature. In order to assess the formation and evolution of landslide dams, several studies suggested the employment of geomorphological indexes. In this framework, the knowledge of site-specific time-space evolution can be useful in the understanding of the landslide dams phenomena. The present work focuses on a landslide dam that occurred in January 1973, which totally dammed the Bonamico River Valley (Southern Italy): the lake reached an area of about 175,000 m2, a volume of about 3.6 × 106 m3 and a maximum depth of 40 m. During 1973–2008, the lake surface gradually decreased and nowadays it is completely extinct by filling. By using satellite and aerial images, the paper discusses the evolution of the lake surface and the causes of the lake extinction. The use of a climate index (i.e., standardized precipitation index at different time scale) indicates that in recent decades the alternance of drought and heavy rainfall periods affected the inflow/outflow dynamics, the filling of lake due to the solid transport of the Bonamico River, and the failure of the landslide dam. View Full-Text
Keywords: Costantino Lake; landslide dam; remote sensing Costantino Lake; landslide dam; remote sensing
►▼ Show Figures 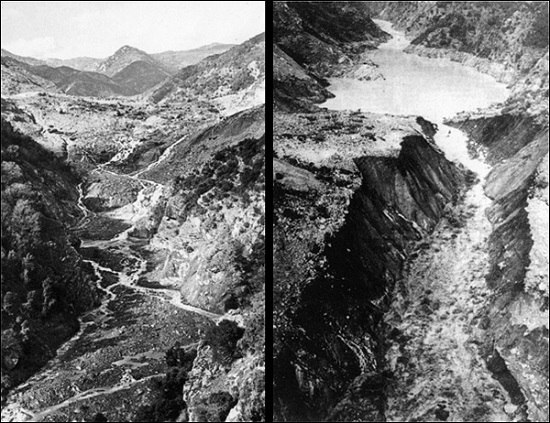