Folded Basinal Compartments of the Southern Mongolian Borderland: A Structural Archive of the Final Consolidation of the Central Asian Orogenic Belt

The Pacific–North American plate boundary in California is composed of a 400-km-wide network of faults and zones of distributed deformation. Earthquakes, even large ones, can occur along individual or combinations of faults within the larger plate boundary system. While research often focuses on the primary and secondary faults, holistic study of the plate boundary is required to answer several fundamental questions. How do plate boundary motions partition across California faults? How do faults within the plate boundary interact during earthquakes? What fraction of strain accumulation is relieved aseismically and does this provide limits on fault rupture propagation? Geodetic imaging, broadly defined as measurement of crustal deformation and topography of the Earth’s surface, enables assessment of topographic characteristics and the spatio-temporal behavior of the Earth’s crust. We focus here on crustal deformation observed with continuous Global Positioning System (GPS) data and Interferometric Synthetic Aperture Radar (InSAR) from NASA’s airborne UAVSAR platform, and on high-resolution topography acquired from lidar and Structure from Motion (SfM) methods. Combined, these measurements are used to identify active structures, past ruptures, transient motions, and distribution of deformation. The observations inform estimates of the mechanical and geometric properties of faults. We discuss five areas in California as examples of different fault behavior, fault maturity and times within the earthquake cycle: the M6.0 2014 South Napa earthquake rupture, the San Jacinto fault, the creeping and locked Carrizo sections of the San Andreas fault, the Landers rupture in the Eastern California Shear Zone, and the convergence of the Eastern California Shear Zone and San Andreas fault in southern California. These examples indicate that distribution of crustal deformation can be measured using interferometric synthetic aperture radar (InSAR), Global Navigation Satellite System (GNSS), and high-resolution topography and can improve our understanding of tectonic deformation and rupture characteristics within the broad plate boundary zone. View Full-Text
Keywords: deformation; topography; earthquake deformation; topography; earthquake
►▼ Show Figures 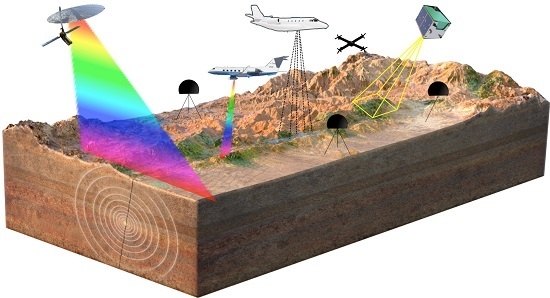