Motivated for Action and Collaboration: The Abrahamic Religions and Climate Change

The objective of this study was to use satellite imagery to monitor the water budget of Al Ain region in the United Arab Emirates (UAE). Inflows and outflows were estimated and the trend of water storage variation in the study area was examined from 2005 to 2014. Evapotranspiration was estimated using the simplified Penman-Monteith equation. Landsat images were used to determine the extent of agricultural and green areas. Time series of gravity recovery and climate experiment (GRACE) observations over the study area were used to assess the inferred water storage variation from satellite data. The change of storage inferred from the Water Budget Equation showed a decreasing trend at an average rate of 2.57 Mm3 annually. Moreover, GRACE readings showed a decreasing trend at a rate of 0.35 cm of water depth annually. Mann-Kendal, a non-parametric trend test, proved the presence of significant negative trends in both time series at a 5% significance level. A two-month lag resulted in a better agreement (R2 = 0.55) between the change in water storage and GRACE anomalies within the study area. These results suggest that water storage in the study area is being depleted significantly. Moreover, the potential of remote sensing in water resource management, especially in remote and arid areas, was demonstrated. View Full-Text
Keywords: GRACE; Water Budget; Landsat; evapotranspiration; UAE; water resources GRACE; Water Budget; Landsat; evapotranspiration; UAE; water resources
►▼ Show Figures 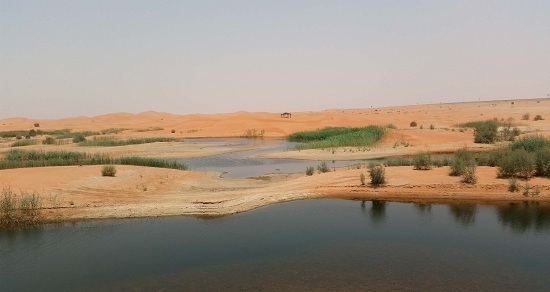